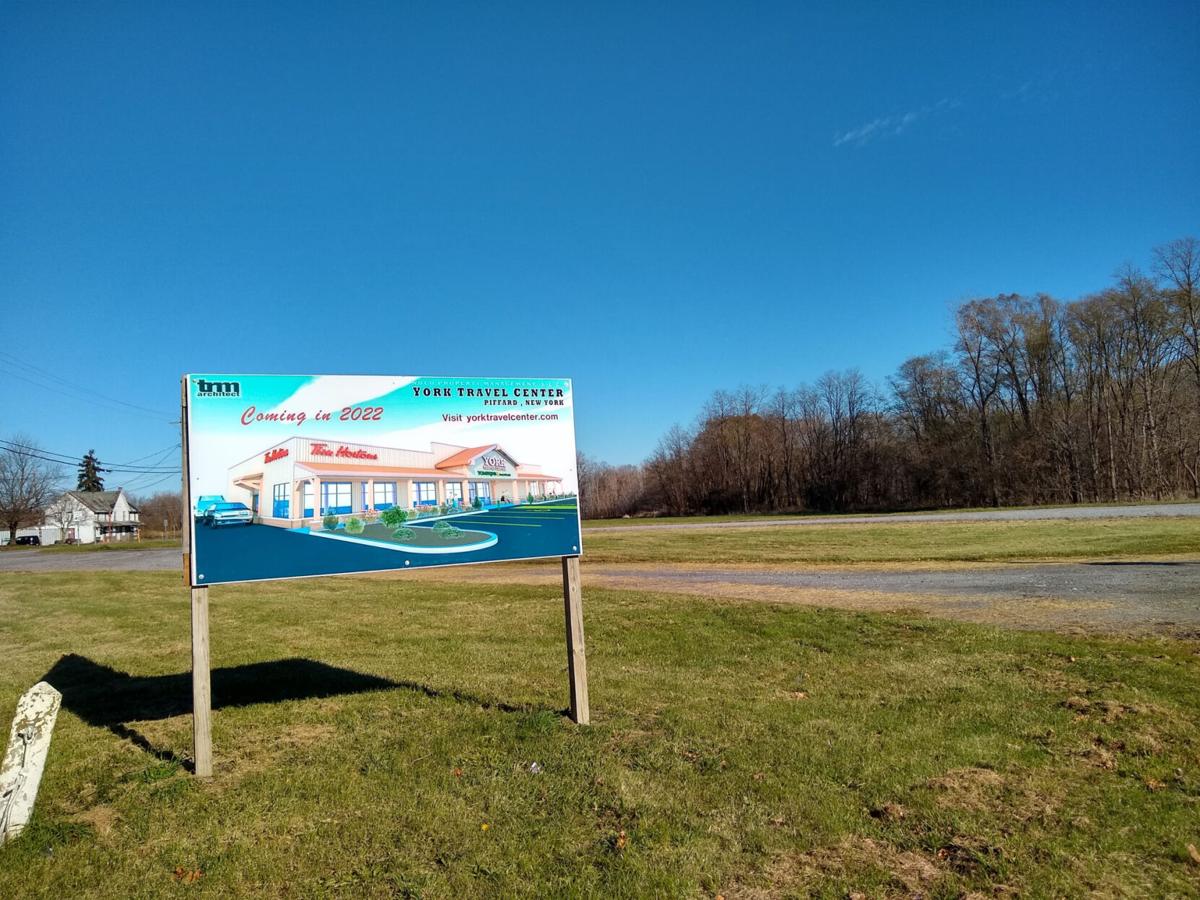 Ben Beagle/Livingston County News The northeast corner of Routes 36 and 63 in the town of York is the location of a proposed truck stop. 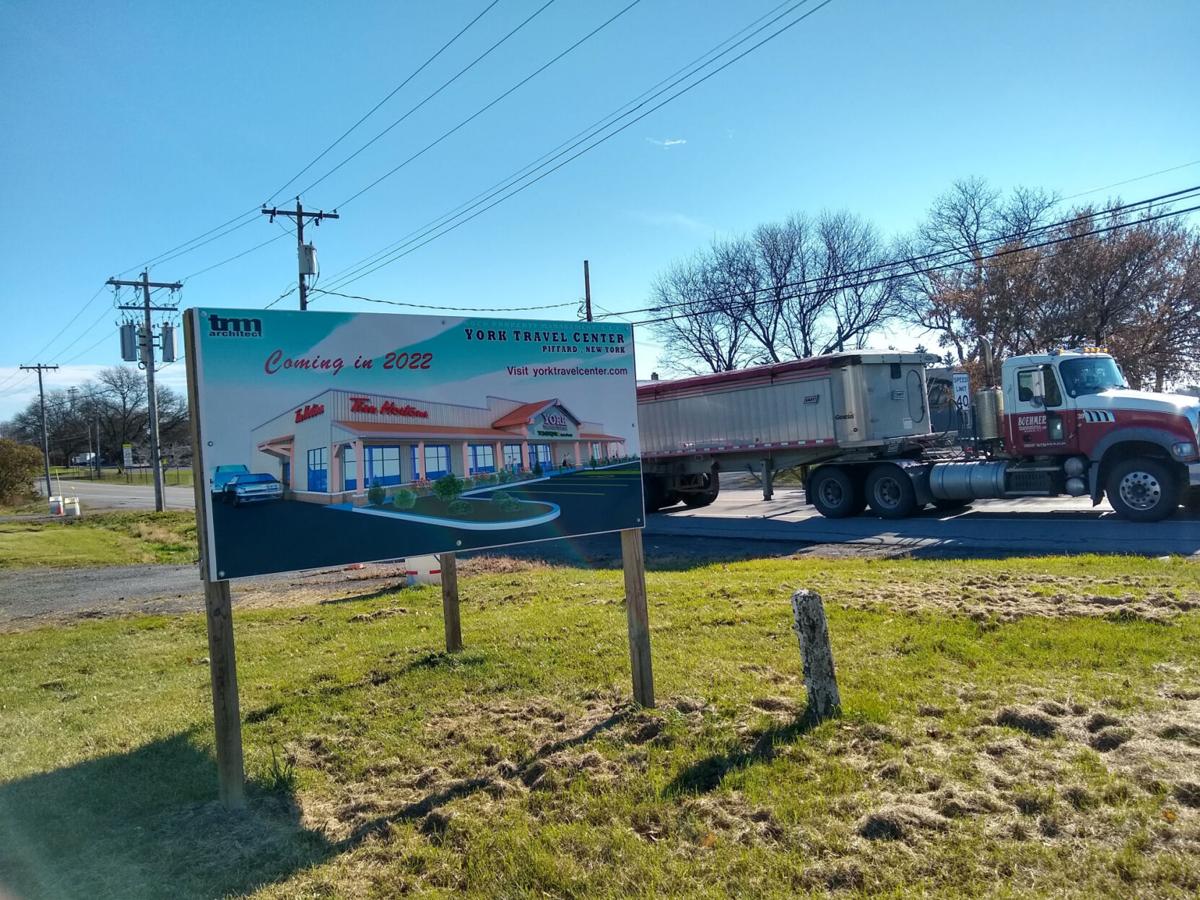 Ben Beagle/Livingston County News A tractor trailer on Route 63 in the town of York passes a sign on the northeast corner of Routes 63 and 36 announcing a proposed truck stop for that location.

Ben Beagle/Livingston County News The northeast corner of Routes 36 and 63 in the town of York is the location of a proposed truck stop.

Ben Beagle/Livingston County News A tractor trailer on Route 63 in the town of York passes a sign on the northeast corner of Routes 63 and 36 announcing a proposed truck stop for that location.

The northeast corner of Greigsville seems to be a lightning rod these days. Basically undeveloped for many years, it has existed as a forest and hayfield intertwined with numerous mowed paths. A farmer’s stand selling sweet corn has popped up there in the last few years.

There had been discussions with the owners of making the 11.4 acres into a “Salt Miner’s Park” and a “Veteran’s Park” as the Town of York just has one small park area and no public place to honor our veterans. Its location at the western end of the Little Italy Nature Preserve makes it a perfect spot to create a trail hub along the Little Italy Trail. This trail has been used to reconnect Retsof and Greigsville and could also connect the Genesee Valley Greenway with the Groveland Secondary Trail which has the potential to reach all the way to Buffalo.

In 2018, the Greigsville Transportation Plan acknowledged the well-known safety issues in the hamlet and how the Preserve could be incorporated in a plan to address these issues but, none of the recommendations were ever instituted.

Now a proposal has surfaced to put a 24-hour truck stop and a chain restaurant on the corner and the issue has caused a local uproar.

People are starting to understand that the $2 million of “tax” revenue promised is actually “taxable” revenue which would result in an average of $154 per year for York. The owners have also asked for tax relief in the form of a sales tax exemption on construction materials and a PILOT which means no property

or school tax for the length of the agreement. In addition, the developers have declined to explain what the promised 30-40 jobs really entail. All this, combined with the fact that using our already scarce commercially-zoned land for chain restaurants when small, local businesses bring in four times more revenue per square foot for the town, makes this a really bad idea economically.

Now let’s look at what else makes this a really bad idea. York Central School is less than 100 feet away from the proposed 24-hour truck stop and the area is surrounded by small residential units. Environmentally, the proposal would be a potential disaster for the school and the surrounding residents, especially for the children, because right now the forested area and the grasslands act as the “lungs” of Greigsville. They absorb many of the problematic particulate matter and volatile organic compounds from the diesel emissions as well as sequester the carbon dioxide produced. As they clean they also pump oxygen and cooling water vapor back into the air. The additional traffic congestion, the proposed removal of 3.1 acres of forest and the paving over of 4.5 acres would make the air dirtier and jeopardize the health and safety of the students and staff of York Central as well as the surrounding residents. The fact that the drainage pond overflow will be directed into Bidwell’s Creek will mean the water quality of the Genesee River will ultimately suffer.

The safety, economics, and environment of York will all be degraded with the implementation of this proposal so why is this happening?

Currently, the owners have outstanding reputations as town leaders and supporters and there are actually much better options that may exist for Greigsville. In fact, a group of community and business individuals have been working since June to find common ground. They feel that this is a very unique opportunity to create something special for the Town of York and Greigsville Corners and they want to make sure the opportunity does not pass by. Why not let these local activists continue to work together to resolve this situation? Wouldn’t it be amazing if the community could come together with a project that had broad support instead of being torn apart by forcing the town to accept a really bad idea?

Dave Nagel is a resident of the town of York. He is a past recipient of the Livingston County Earth Day Award, which recognized his more than three decades of educating youth about nature.