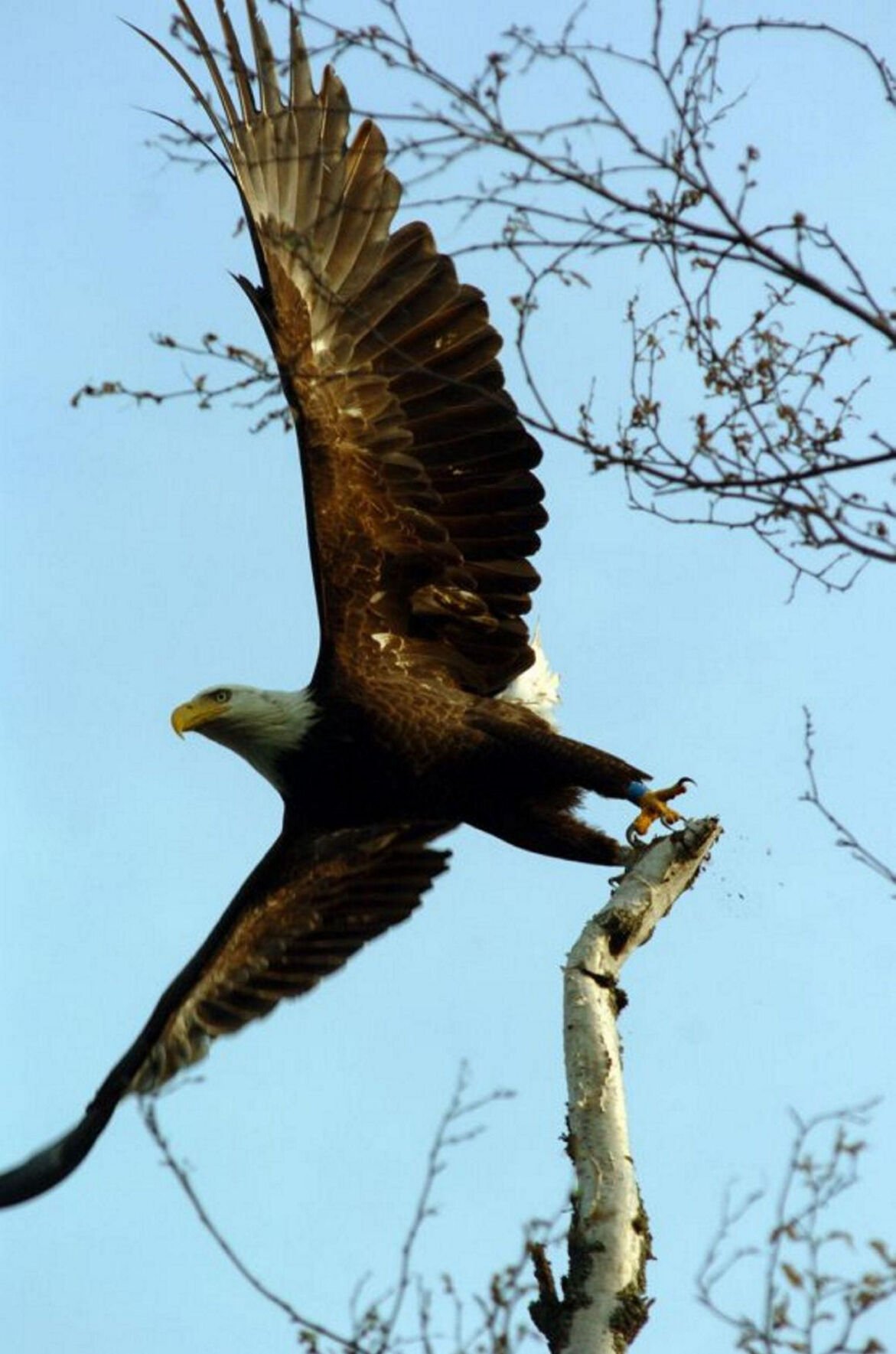 A bald eagle takes off from a perch in Saranac Lake in November 2009. There was one nesting pair of bald eagles left in New York state in 1973 when the Endangered Species Act was signed into law. Lou Reuter/Adirondack Daily Enterprise 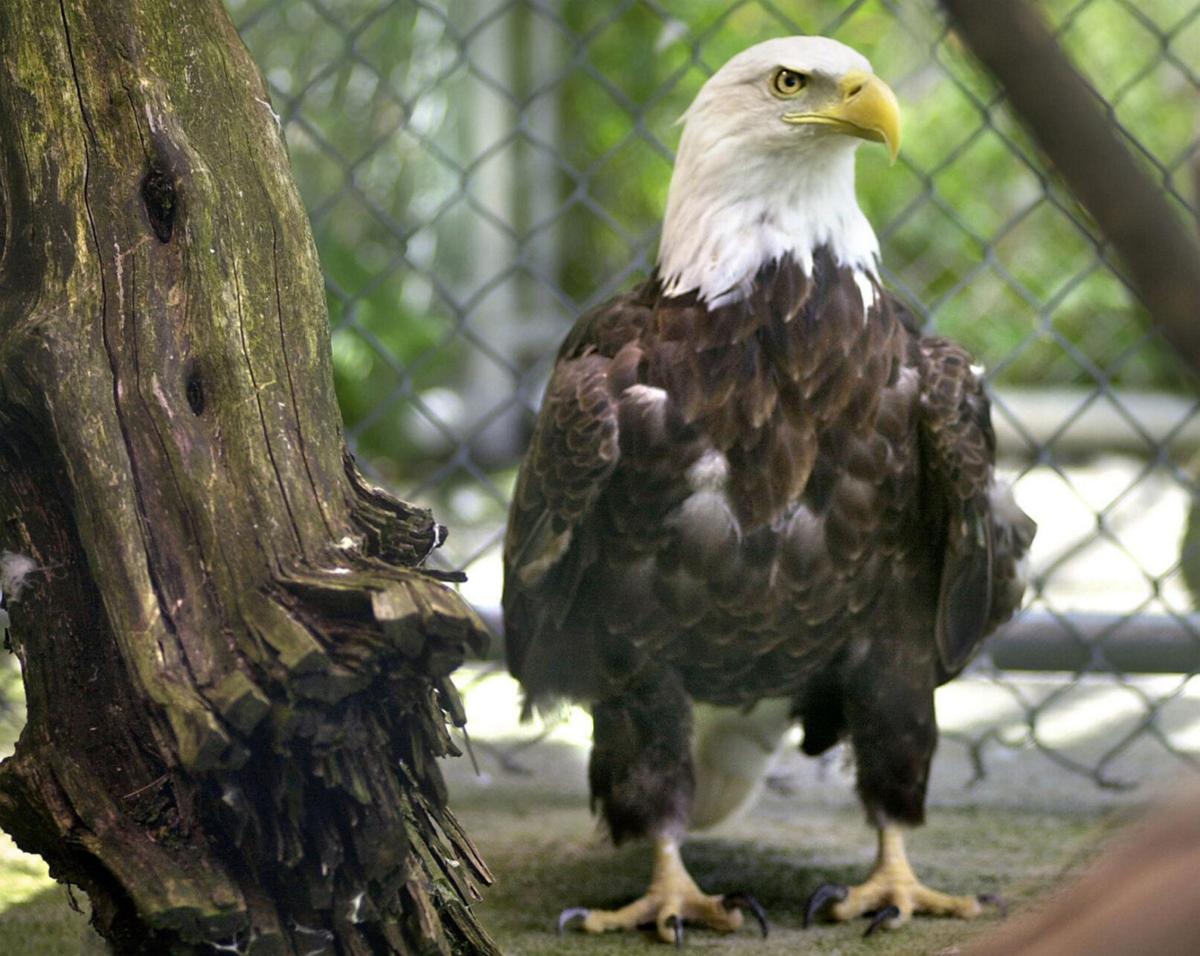 Duncan, an American bald eagle, lived at the New York State Zoo at Thompson Park in Watertown for about 12 years. He died in 2017. Watertown Daily Times

A bald eagle takes off from a perch in Saranac Lake in November 2009. There was one nesting pair of bald eagles left in New York state in 1973 when the Endangered Species Act was signed into law. Lou Reuter/Adirondack Daily Enterprise

Duncan, an American bald eagle, lived at the New York State Zoo at Thompson Park in Watertown for about 12 years. He died in 2017. Watertown Daily Times

Six decades ago, conservation authorities recorded an alarming drop in the population of the animal that became our national symbol.

There were only 487 nesting pairs of bald eagles in 1963 throughout the country — 417 of them in the continental United States — according to the U.S. Fish & Wildlife Service. This raised concerns that we could lose the bald eagle for good.

“When America adopted the bald eagle as the national symbol in 1782, the country may have had as many as 100,000 nesting eagles. The first major decline of the species probably began in the mid- to late 1800s, coinciding with the decline of waterfowl, shorebirds and other prey. Although they primarily eat fish and carrion, bald eagles used to be considered marauders that preyed on chickens, lambs, and domestic livestock. Consequently, the large raptors were shot in an effort to eliminate a perceived threat,” the government agency wrote. “Coupled with the loss of nesting habitat, bald eagle populations declined. In 1940, noting that the species was ‘threatened with extinction,’ Congress passed the Bald Eagle Protection Act, which prohibited killing, selling or possessing the species. A 1962 amendment added the golden eagle, and the law became the Bald and Golden Eagle Protection Act. Shortly after World War II, DDT was hailed as a new pesticide to control mosquitoes and other insects. However, DDT and its residues washed into nearby waterways, where aquatic plants and fish absorbed it. Bald eagles, in turn, were poisoned with DDT when they ate the contaminated fish. The chemical interfered with the ability of the birds to produce strong eggshells. As a result, their eggs had shells so thin that they often broke during incubation or otherwise failed to hatch. DDT also affected other species such as peregrine falcons and brown pelicans. In addition to the adverse effects of DDT, some bald eagles have died from lead poisoning after feeding on waterfowl containing lead shot, either as a result of hunting or from inadvertent ingestion. … Loss of habitat, shooting, and DDT poisoning contributed to the near demise of our national symbol.”

Fortunately, the government adopted policies to protect the bald eagle and allow its numbers to increase. This strategy has succeeded and shows the effectiveness of good conservation management.

“Just [last] week, the Fish & Wildlife Service issued a population and distribution update based on data collected in 2018 and 2019. With the banning of the insecticide DDT in 1972, and decades of breeding and release efforts headed by state and federal agencies, U.S. eagle populations have recovered,” an article published March 30 by the Watertown Daily Times reported. “Since 2009, according to the new report, populations have more than quadrupled. More than 71,000 nesting pairs and 316,000 individuals were accounted for in the 2019 breeding season.”

The state Department of Environmental Conservation reports that more than 170 pairs of bald eagles inhabit New York. DEC policies contributing to the population growth include “restrictions on the use of toxic substances that interfere with the birds’ breeding; intervention to protect and restore the species in the wild; protection of critical eagle habitat; [and] research, monitoring and management of eagles in the wild.”

This success story demonstrates that environmental programs make a difference when planned carefully and implemented equitably. But it also reminds of that more work must be done to ensure the survival of many wildlife species. A report by the Audubon Society indicates that climate change threatens two-thirds of North American bird species with extinction.

Our actions affect the lives of living creatures who share our Earth and its resources. We must conduct ourselves in ways that increase the chances that we’ll all prosper.