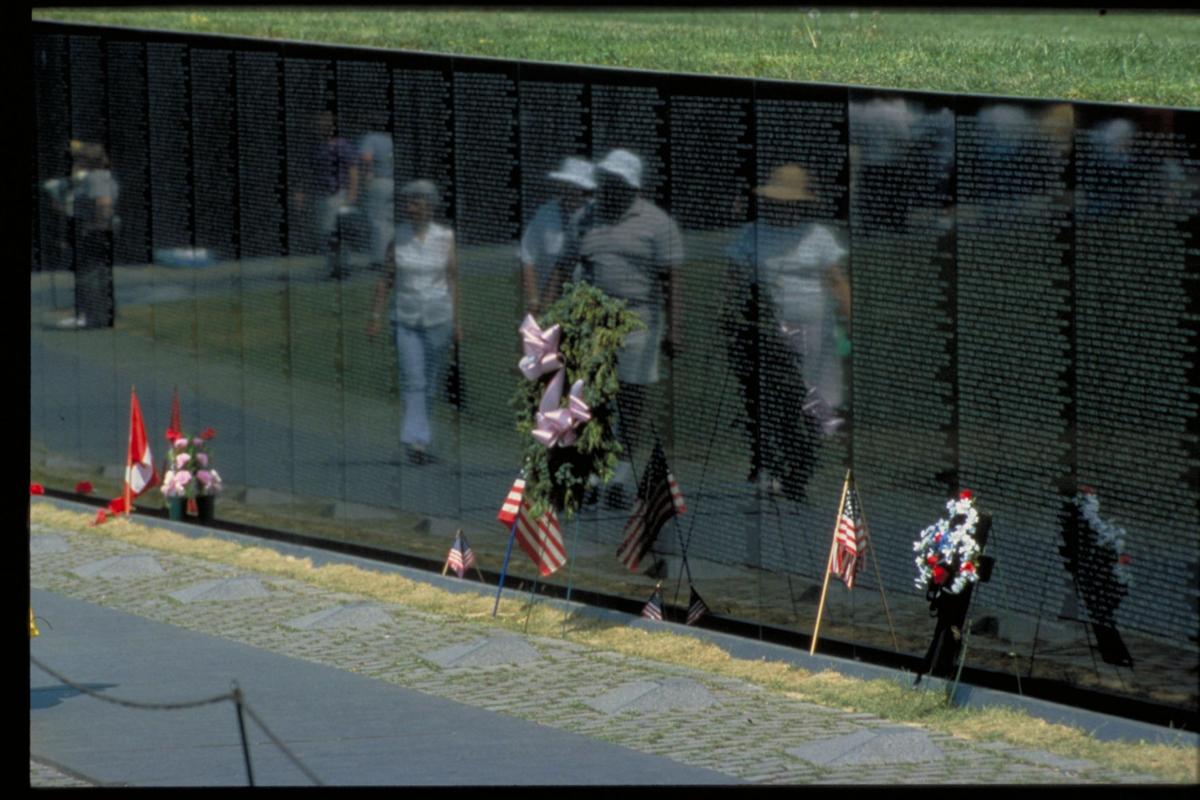 National Park Service Photograph Visitors reflected in several panels of the Wall with wreaths and flowers in front The Vietnam Veterans Memorial serves as a testament to the sacrifice of American military personnel during one of this nation’s least popular wars. The purpose of this memorial is to separate the issue of the sacrifices of the veterans from the U.S. policy in the war, thereby creating a venue for reconciliation. Keywords: Vietnam War memorials; Vietnam Conflict; 1961-1975; United States -- History -- 20th century 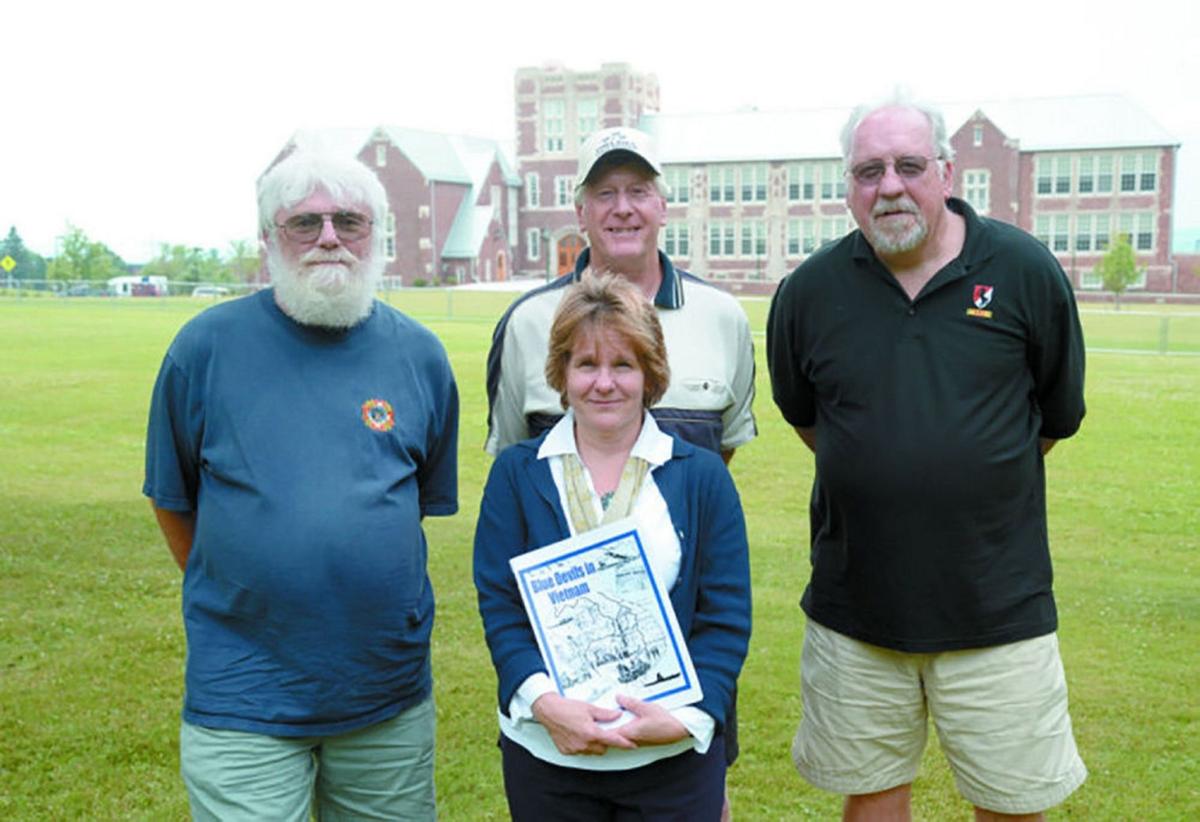 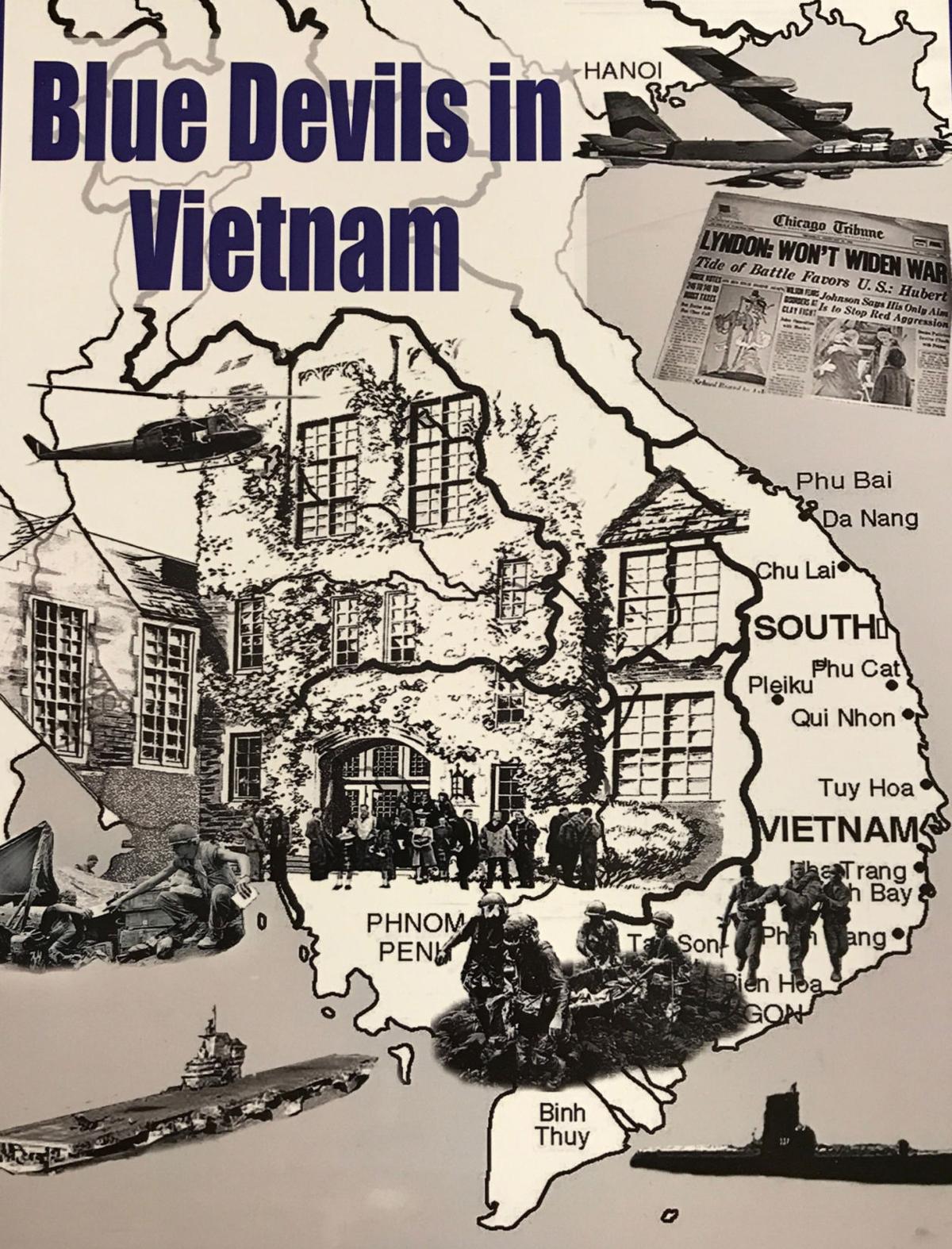 The cover of “Blue Devils in Vietnam,” which compiled stories of Geneseo-area Vietnam veterans and their families. 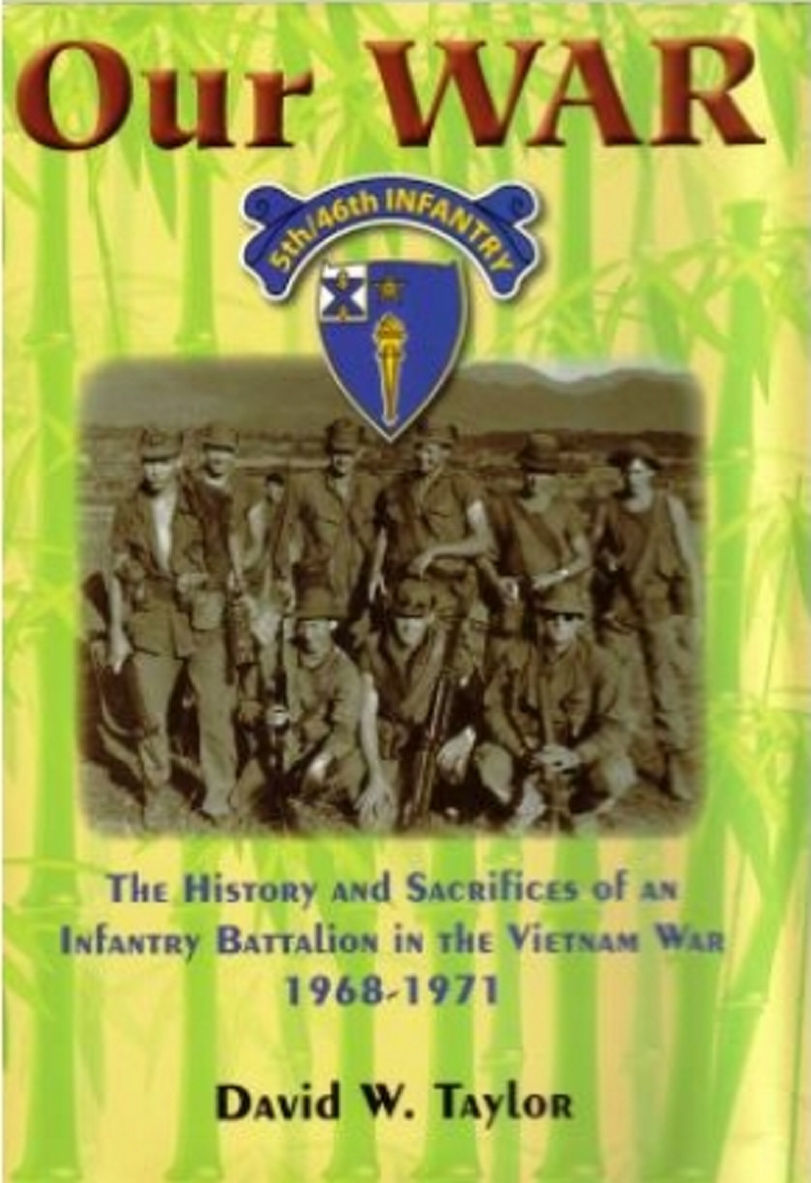 The cover of “Our War” by David W. Taylor.

National Park Service Photograph Visitors reflected in several panels of the Wall with wreaths and flowers in front The Vietnam Veterans Memorial serves as a testament to the sacrifice of American military personnel during one of this nation’s least popular wars. The purpose of this memorial is to separate the issue of the sacrifices of the veterans from the U.S. policy in the war, thereby creating a venue for reconciliation. Keywords: Vietnam War memorials; Vietnam Conflict; 1961-1975; United States -- History -- 20th century

The cover of “Blue Devils in Vietnam,” which compiled stories of Geneseo-area Vietnam veterans and their families.

The cover of “Our War” by David W. Taylor.

In “Blue Devils in Vietnam,” Jim DeCamp, Tony Gurak, Roger Johnson, and many other Vietnam veterans who had attended Geneseo Central School shared their experiences before, during, and after their Vietnam service.

Livingston County Historian Amie Alden, the editor of “Blue Devils in Vietnam,” came to appreciate “what it was like to be plucked out of small-town Geneseo and plopped into a place on the other side of the world surrounded by jungles and rice paddies and live in fear for an entire year.”

The heartrending stories of Francis Rosebrugh, Robert Henderson and Charles Wilkie, who were killed in action in Vietnam, are included in the book, which is dedicated to them.

The veterans and Alden put their hearts and souls into completing an enlightening, insightful and highly readable book.

One of the authors, Roger Johnson, who served in the 5th/46th Infantry Battalion, called my attention to a book about this battalion by Col. David W. Taylor, of Medina, Ohio, who served as a platoon leader in the 5th/46th until he was severely wounded during combat.

In June 1969, as Taylor lay in a Fort Dix, N.J., Army hospital, he wanted to be with his men in Vietnam – while also feeling grateful “there were no more sleepless nights waiting to be hit in small perimeters, no unyielding heat, and no anticipation of what lay ahead as my platoon patrolled our assigned terrain. And, in that hospital room, there were no more mines.”

Taylor began wondering “what happened to my men after I was wounded? What other missions did they have to endure? Did the battalion acquit itself well in the war? Where else did it go? What did they experience? How did it all end? What happened in the battalion before I arrived?”

Taylor conscientiously addresses these and other questions in “Our War –The History and Sacrifices of an Infantry Battalion in the Vietnam War 1968-1971” (War Journal Publishing, 689 pages).

Taylor discusses each of the 175 soldiers in the 5th/46th who paid the ultimate price and whose names appear on the Vietnam Wall. For example, on Jan. 14, 1970, PFC Gilbert “Frenchy” Benain “stepped on a booby-trapped 105mm howitzer round which severely wounded him and eight comrades. Joseph Ach and others were wounded but struggled to keep Frenchy alive. One of Benain’s legs were attached only by skin from the knee to his boot. His stomach was blown wide open and his comrades stuffed a shirt into the open cavity to hold his intestines inside. Benain survived the chopper ride but died in the hospital hallway as they wheeled him to surgery. His loss of blood was too much despite the efforts of his wounded comrades to keep him alive. Gilbert Benain was age 22, and single from New Orleans, Louisiana.”

The attack on Hill 76 on Feb. 1, 1971, was the last major fire-fight resulting in heavy casualties for the 5th/46th. Among those “answering their final roll call that night” was Specialist 4 Stephen Edward Warren, 20, from Rochester. Taylor quotes Amy Chadwick, Warren’s fiancé, who wrote 30 years later: “I can still remember the face, the shades worn when he boarded the plane in Rochester, NY. That was the last time I saw him alive. That was July 1970. I still have every single letter written to me. I have an 8 by 10 U.S. Army picture, framed. He’s frozen in time within that frame ... He was my soulmate.”

Taylor explains: “The Vietnam Wall has become a catharsis for many of the battalion’s veterans, as it has for many other Vietnam veterans. One battalion veteran from Alpha Company saw two soldiers in Vietnam die in separate incidents where he should have been. He recalls, ‘two people died in my place. It took PTSD therapy and a couple visits to the Wall to help me deal with it and move on. I guess the Lord just wasn’t through with me.’”

2Lt Michael Foutz of Roseburg, Ore., and SSG Carl Bauer of Rock Island, Ill., who were both killed in action and are discussed in Taylor’s book, are also described by Johnson in “Blue Devils in Vietnam.” Foutz was Johnson’s platoon commander. Bauer was Johnson’s squad leader.

Foutz “was always making contacts with platoon members, asking how they were and what was on their mind. It was easy to see that he was a very good leader and that he truly cared for the men who served with him and we would have followed him anywhere. (After a fire fight with Viet Cong) we were coming to grips with the fact that we had just lost our beloved Lt. Foutz. He was killed and a second platoon mate and friend was seriously wounded.”

Squad leader Bauer didn’t order squad members to do anything dangerous he wasn’t willing to do himself. Bauer was killed during combat after selecting himself to perform an especially dangerous task.

It was during my most recent visit to the Trail of Remembrance at Canandaigua’s American Legion Post, three weeks before Memorial Day, that I decided to focus on “Blue Devils In Vietnam” and “Our War” for this essay. Both books required many years of writing, planning and research, because, as “Blue Devils In Vietnam” explains, “we came home blessed with life and the ability to tell our story and to remember those who cannot.” According to Taylor “writing this detailed history did not come easy” but he wrote “Our War” to “forever keep alive the memory of their courage, struggles, and sacrifices.”

“Blue Devils In Vietnam” and “Our War” provide not only memorable perspectives about the Vietnam War and its legacy, but also help us to better appreciate the true meaning of wartime service and sacrifice by all who served honorably in all our wars – who we should remember not only on Memorial Day and Veterans Day but also throughout the year.