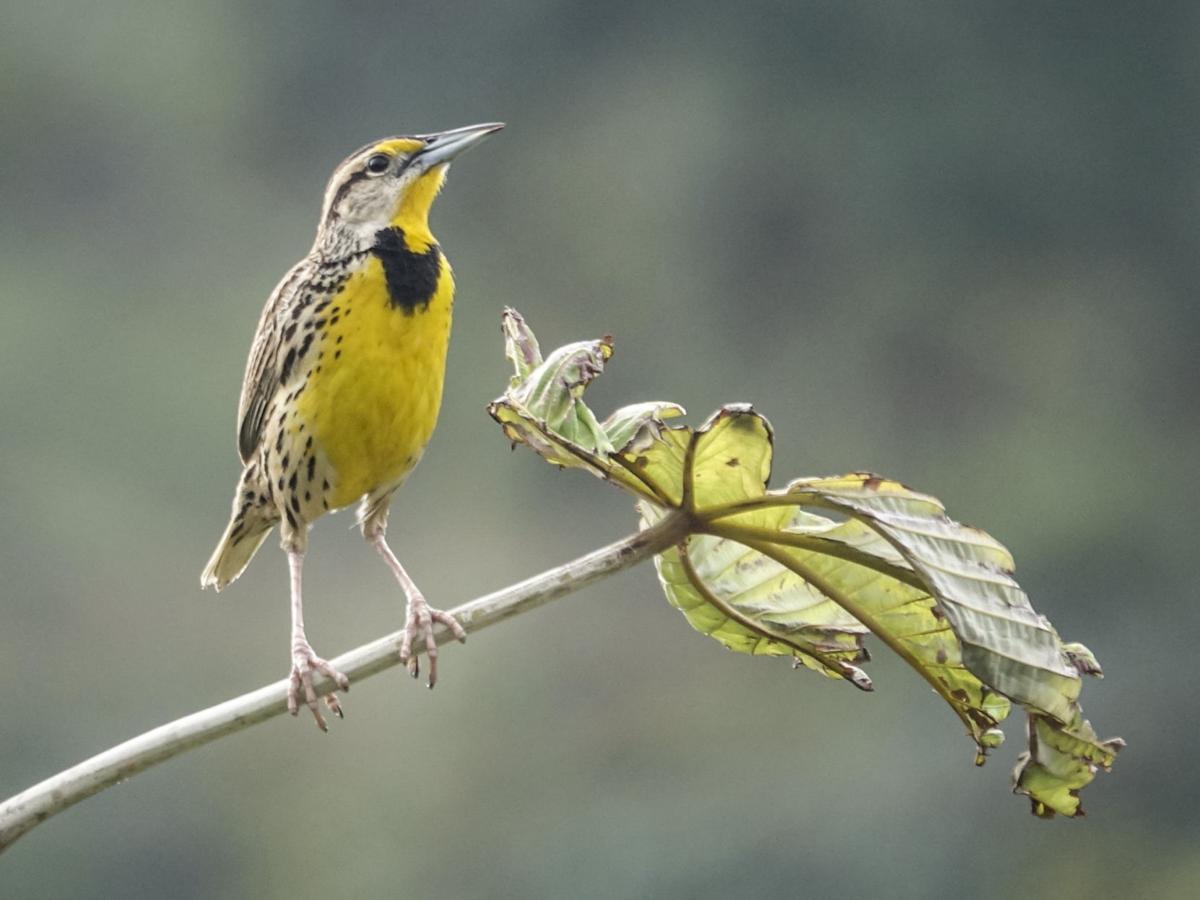 Mike’s Birds via WikiMedia Commons/Creative Commons Attribution-Share Alike 2.0 Generic license The lemon-yellow eastern meadowlark loves rolling pastures and meadows with nearby trees. The meadowlark population is declining due to loss of habitat for nesting which is open fields and meadows. 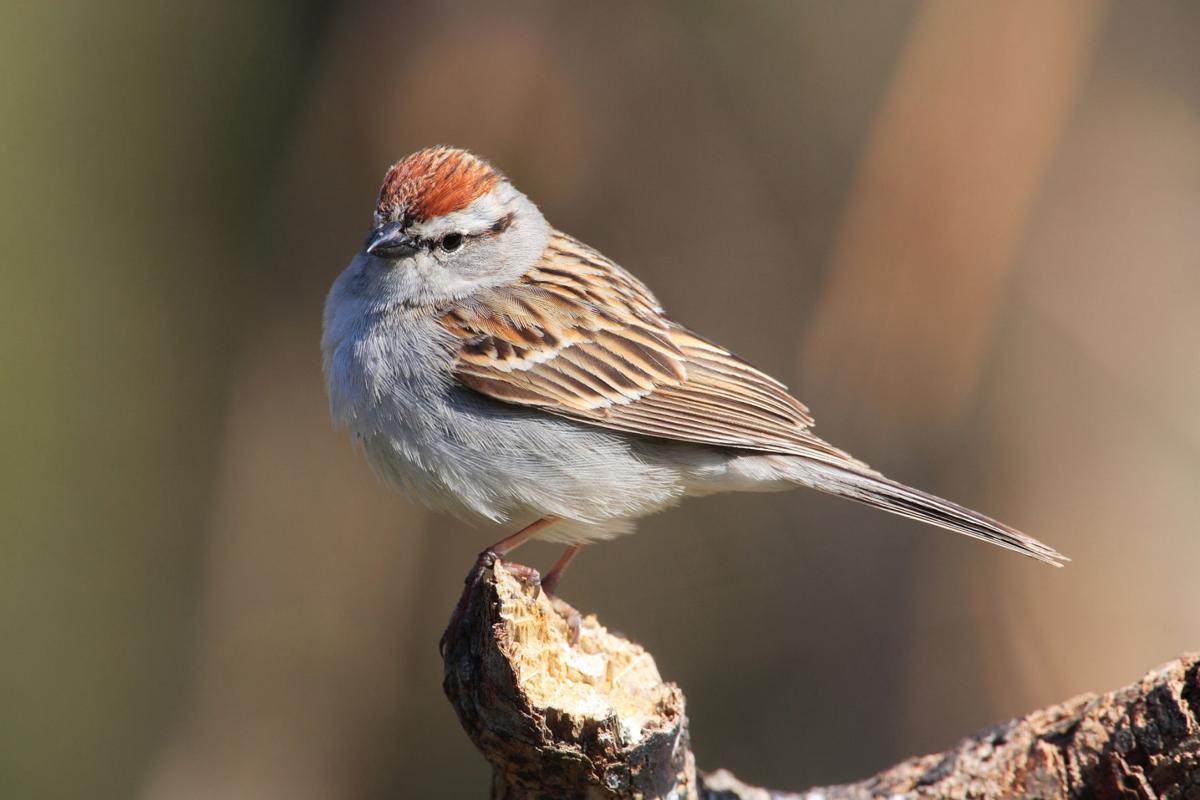 Mdf via WikiMedia Commons/GNU Free Documentation License, Version 1.2The chipping sparrow is a yard favorite and believe it or not started showing up early this year. Generally, you can count on seeing them around April 10.

Mike’s Birds via WikiMedia Commons/Creative Commons Attribution-Share Alike 2.0 Generic license The lemon-yellow eastern meadowlark loves rolling pastures and meadows with nearby trees. The meadowlark population is declining due to loss of habitat for nesting which is open fields and meadows.

Mdf via WikiMedia Commons/GNU Free Documentation License, Version 1.2The chipping sparrow is a yard favorite and believe it or not started showing up early this year. Generally, you can count on seeing them around April 10.

April is here and the birds are steadily streaming in from their winter homes. This is the month with lots of action in the bird world with even more species showing up in May.

It’s a great time of year for birding and enjoying it is what life is all about!

Most bluebirds are going to be building their nests and laying eggs in mid-April and hatching them in late April or early May.

Unusually cold weather patterns in late April and well into May are often disastrous for bluebirds’ first nesting. Be ready for the bluebirds coming to your nest boxes and remember to check on them!

During the second week of April many tree swallows will be present. They will be checking out several nest boxes as well and will use ones that the bluebirds are not using.

Tree swallows are really neat birds to have around. Don’t get them mixed up with barn swallows which nest under eaves and in buildings and have forked tails. Tree swallow have a white belly and only nest in hollow cavities such as nest boxes. A few overanxious tree swallows have already been spotted in late March. How they survive in these cool days of spring is a good question. Many don’t.

April will bring us the return of the lemon-yellow eastern meadowlark. They love rolling pastures and meadows with nearby trees. Their song is a beautiful melodious mixture of clear whistles. The meadowlark population is declining due to loss of habitat for nesting which is open fields and meadows.

The same is true of the bobolink – a black and white blackbird of open fields that has a very interesting unmistakable chattery song. Later April is when they generally begin arriving from their more than 3,000 mile trip from Chile in South America.

Unfortunately, many bobolinks and meadowlarks aren’t successful as their nests get mowed off when the hay is harvested in May and June. Hay fields and pastures that are mowed or used later in the season provide successful nesting sites.

The return of several native sparrows from the south is always welcome. Each has its own song and most of them arrive in April. The chipping sparrow is a yard favorite and believe it or not are already showing up on March 31. Generally, you can count on seeing them around April 10.

Their close relative is the American tree sparrow which spends the winter here and will be heading north during mid-April. See what date your first chipping sparrow shows up and see how late your last tree sparrow stays. Last year, our tree sparrows stayed until April 18 before heading way up north. Generally, you don’t see chipping sparrows at the same time as you see the tree sparrow, but they do overlap for a few days in April.

April is when the woodcocks starting doing their neat courtship flights. Find a partially wooded wet field and go there in the evening before sundown and start listening for them. They make a real neat call while flying up into the sky and while they make their spiral descent to earth, the air movement through their wings makes a really neat noise as well. It is quite a fascinating courtship display that you ought to witness.

Several other interesting birds are showing up all month. The eastern towhee (formerly called rufous–sided towhee) will be back. Ours is already here because it spent the winter with us which is quite unusual. The towhee’s song sounds like “Drink your tea...”

We may see more action from some northern mockingbirds and the returning brown thrashers singing from a tall tree in hedgerows and wood margins.

Last evening, Leslie and I went to our Silver Lake house to do some yardwork. (Actually, I went to do some birding!) There were several interesting migratory ducks and other waterfowl on the lake. My main goal was to check on the two wood duck nest boxes that I have installed along our lake frontage. Sure enough, one box already has 10 eggs in it!

Besides wood ducks, hooded mergansers nest in these large nest boxes and I believe this is a hooded merganser. She was not on the nest as she is still laying an egg a day – likely each morning.

I also was determined to complete digging my 3-foot-deep hole in the ground in preparation for the installation of my new purple martin pole which will support 12 nesting gourds. I’m hoping that the returning purple martins at Silver Lake will take a liking to our purple martin complex!

We got a lot of work done, watched some really neat birds on the lake, added some wood shavings to the wood duck boxes, and finished digging that deep hole for the martin pole – all between 6 and 8 p.m. I said to my lovely wife as we finished up, “This is what life is all about!”

I’m so excited about the return of spring and all of the new life that the wonderful and interesting world of birds brings to us.

So much beauty everywhere you look as spring unfolds. Yes, lots of work to do, but lots to enjoy while we do the work.

Enjoy life and thank God for everything. That’s what life is all about!

Hans Kunze is an avid birder and nature enthusiast who has been writing about birds and nature for more than 30 years. He writes for The Daily News and The Livingston County News twice each month. Write him at 6340 LaGrange Rd Wyoming, NY 14591 or call (585) 813-2676.