Provided Keshequa picked up the season sweep over Geneseo Tuesday. 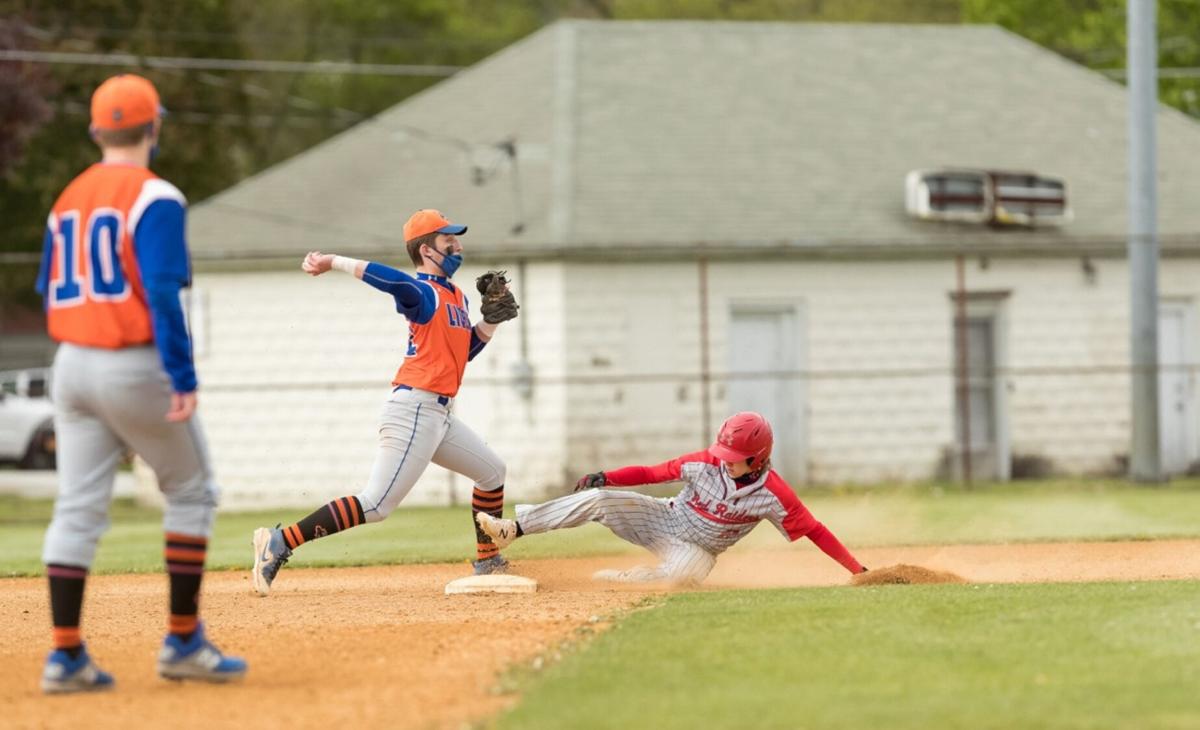 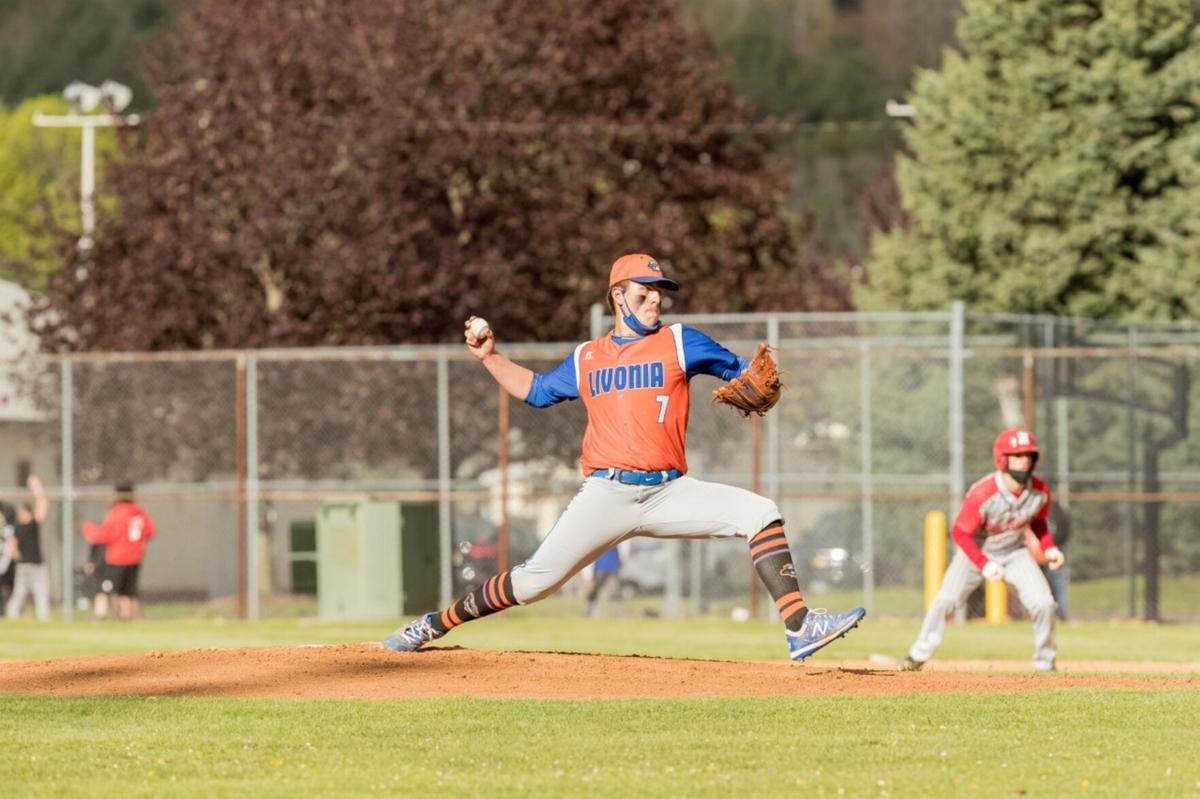 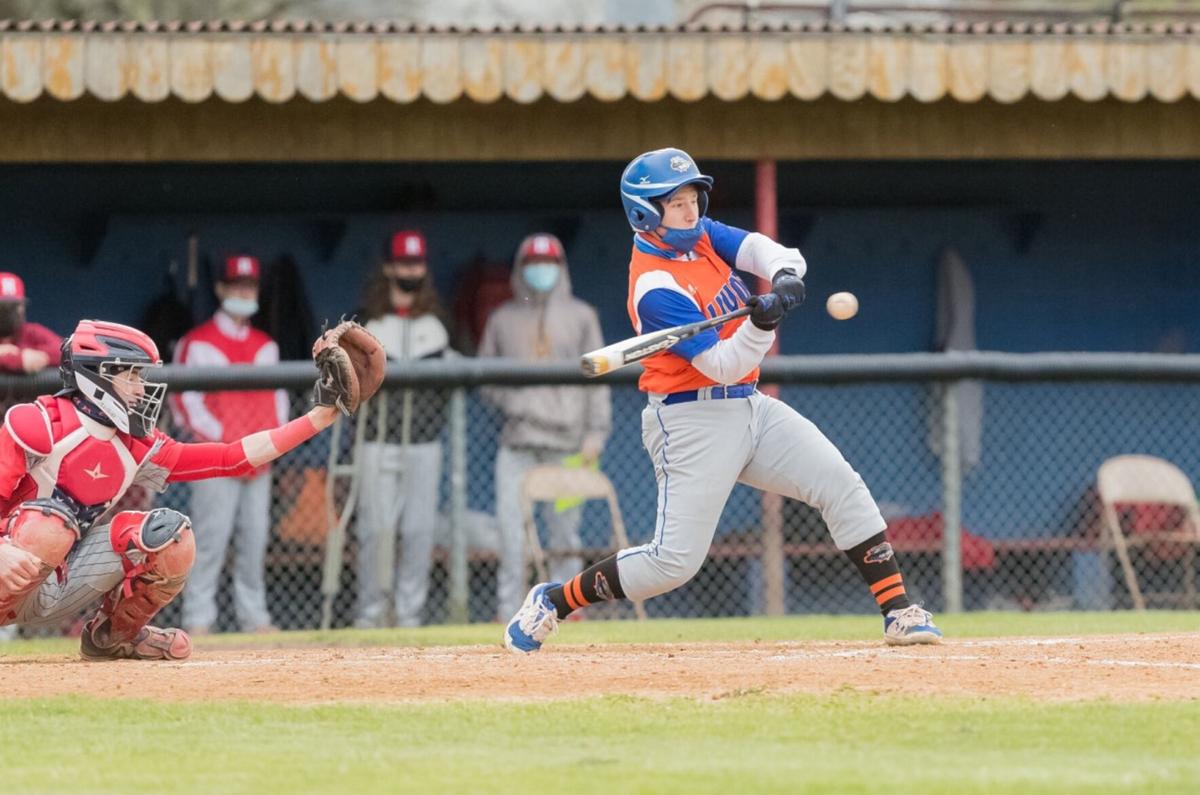 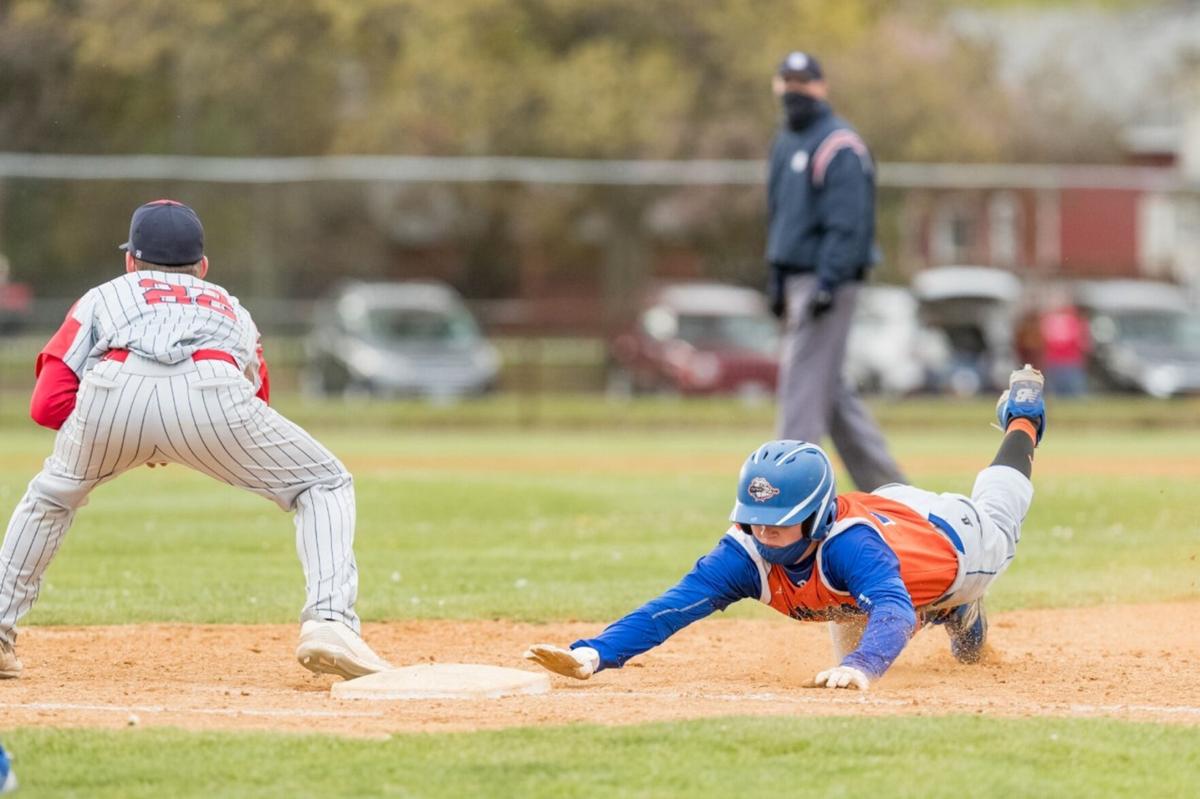 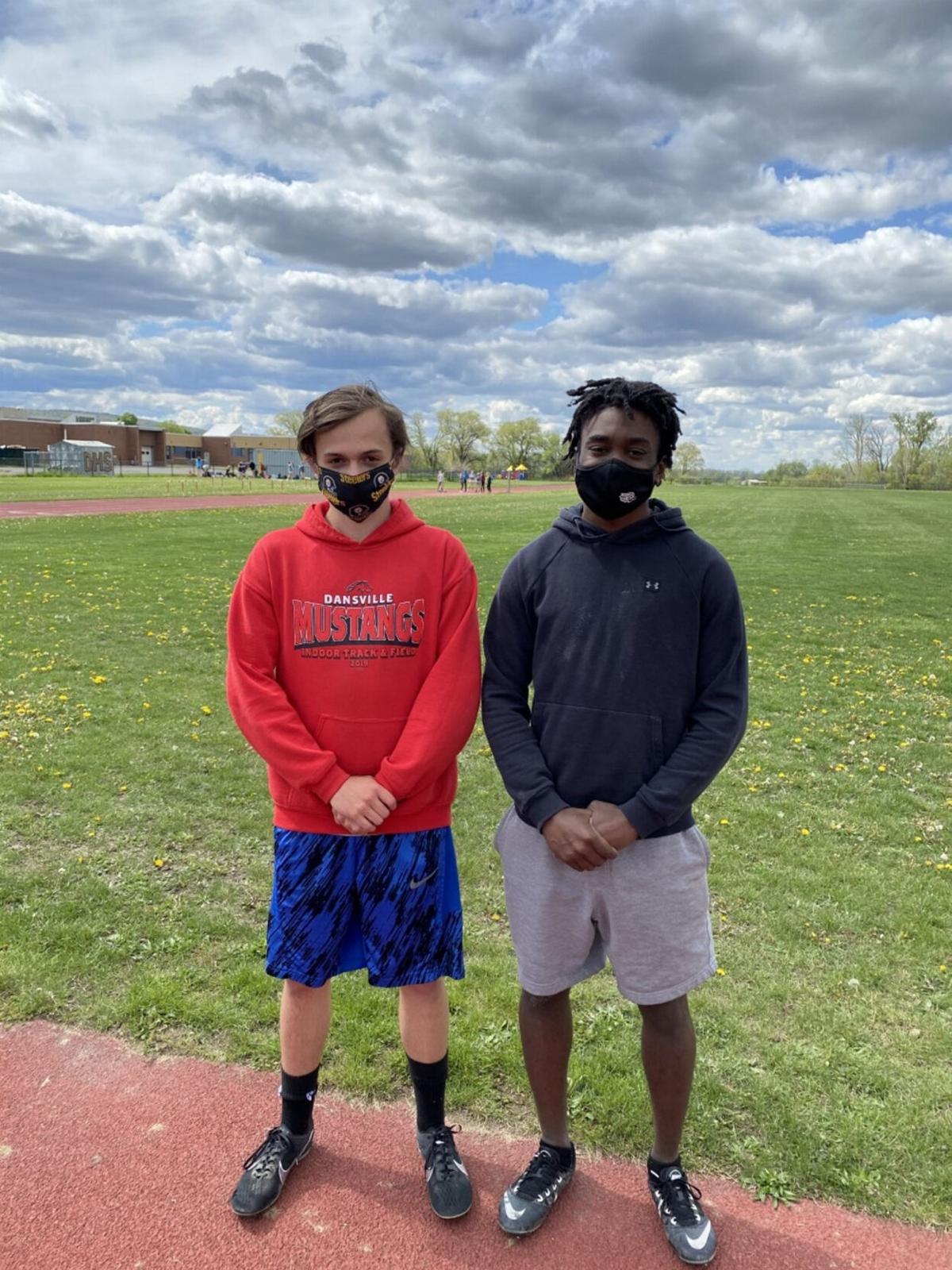 Dansville’s Chad Thomas (left) and DeShawn Owens led Dansville to another victory Tuesday night. Owens has gone 4-for-4 in both meets this season.

Provided Keshequa picked up the season sweep over Geneseo Tuesday.

Dansville’s Chad Thomas (left) and DeShawn Owens led Dansville to another victory Tuesday night. Owens has gone 4-for-4 in both meets this season.

NUNDA — The pitching combination of Riley Rease and Aidan Wood was a winning one Tuesday as Keshequa defeated Geneseo 8-4 to earn the season sweep over the Blue Devils this season.

Geneseo led 4-3 heading into the bottom of the sixth when Keshequa scored five runs.

Rease started the game and pitched four innings giving up just two hits and two runs and three walks. He struck out one.

Wood came on for three innings of relief getting the victory as he struck out five while allowing two runs on one hit and one walk.

Jordon Luther drove in both Ryan Thayer and Cesar Batlle after Batlle put down a bunt single, on an error at third

Geneseo was held to just three hits including two by Nick Staley, who also added two RBIs. Joey DeBell added a hit and one RBI for the Blue Devils.

“We’re headed in the right direction and getting experience that we need,” Geneseo coach Nick Drollette said. “I know that if we keep working on the things we have been and make steps forward that the wins will start to come.”

Alex Benitez not only broke a scoreless game in the top of the sixth inning but also broke up a no-hitter with a single through the drawn in infield as visiting Livonia survived their trip to Hornell Tuesday night.

Livonia, who had no hits until the sixth, opened the inning when Alex Minnehan reached on an error at third and then moved to second when Robby Stewart was hit by a pitch. After a double steal moved both runners up, Benitez hit one through the infield to plate the first two runs in the inning. Livonia would add two more runs on a balk by the pitcher and ended up scoring five runs total on just two hits.

Jack Donnelly’s single tacked another run in the sixth to account for Livonia’s only two hits of the game.

Jack Kearney pitched the first few innings allowing just one hit before Minnehan came on in relief in the third innings and allowed just two hits and six K’s.

Livonia is 4-0 and will host Le Roy Thursday.

York senior Clayton Harris tossed a two-hitter with 11 strikeouts and no walks as York blanked Cal-Mum Tuesday in LCAA action.

The game went only five innings due to the mercy rule.

York (3-1) was led offensively by sophomore Maddox Timothy who went 2-for-4 with one RBI.

Harris was 1-for-2 with a run scored and one RBI while walking twice.

David Cuozzo was 1-for-3 with two runs scored.

“We played really well tonight,” York coach Edward Green said. “Clayton had all of his pitches working and looked strong on the mound. As a team, we showed great patience at the plate and were rewarded with some solid offensive production from everyone in the lineup. These guys are showing some great confidence on the field and I am enjoying watching them play ball.”

Le Roy’s John Panepento earned his first Varsity victory on the mound striking out four batters and giving up only one hit through four complete innings.

Panepento also had a great day at the plate going 3-for-3 with two runs scored and one RBI.

Also for Le Roy, Tyler Strollo and Alex Panepento each had two RBIs while Robbie Newmark had two singles and two runs scored.

Dansville was led by Ryan Carnavale who was 1-for-2 with two runs scored and one RBI while Ben Sick was 1-for-3 with two RBIs.

These Lady Knights are still cruising.

Anna Lyness led the offense going 3-for-5 with a double and a two-run triple in the seventh inning to break a 2-2 tie as York went on for the victory in LCAA action.

Also for York, Meredith Holland added an RBI double in the seventh inning. Holland was also the winning pitcher with nine K’s as she scattered nine hits.

For Cal-Mum, Maddy Devore was 2-for-4 with a double at the plate. Devore also took the loss in the circle allowing eight hits with five K’s.

Olivia Woodward and Avery DeMarco each went 3-for-4 at the plate.

“York made some plays in the field when they needed to,” Cal-Mum coach Dan Dickens said. “We left way too many runners on the bases. We have two tough ones with Keshequa and Avon coming up so we need a good practice tomorrow and look to bounce back.”

York improved to 4-0 on the season while Cal-Mum lost their first game of the year and fell to 2-1.

Hayley Papp pitched her second no-hitter of the season as she struck out 14 batters and walked just one during Le Roy’s victory Tuesday.

Offensively, Bryn Luckey had three hits including a triple and one RBI while Jill Curtis and Brenna Fenstermaker each drove in three runs.

Hailey Johnson and Abbie Woodworth drove in two runs apiece for the Knights.

Hannah Fairbrother led the offense going 2-for-4 with three stolen bases, one RBI and a run scored while Huber was 1-for-3 with an RBI double.

Jessica Recktenwald was 1-for-2 with a run scored and two stolen bases while Laura Mansfield scored twice and stole a pair of bags.

“We had to take advantage of everything they gave us, which wasn’t much,” Way-Co coach Dave Stewart said. “Joleigh Crye is probably one of the hardest throwers in Section V, so we really had our work cut out for us.”

Keshequa improved to 3-1 on the season as they were led Tuesday by Aurora Sabins who got the win in the circle striking out five and allowing only two hits in the game.

Mackenzie Gillen, Julia Wilkins, Cheyenne Cotton, and Alex Hugi each had a triple.

Libby Benner and Aurora Sabins each added a double.

Geneseo was led by Morgan Walton who was 1-for-3 with a run scored.\

At first singles, Bailey Morse cruised to the victory over Jonah Cousins 6-1, 6-2 while Mitchel Hockey eased past Griffin Meyer 6-0, 6-2 at second singles for the Knights.

Owen Williams went on for the 6-1, 6-1 victory over Maxwell Mesi at third singles.

Avon picked up both points in doubles as Zachary Colvin and Kaden Colt won a three-setter over Ian Kemp and Joelle Stowell by 3-6, 6-3, 6-4 while Avon teammates Emma Vincent and Michael Montano swept past Benjamin Robinson and Katelynn Everett 6-4, 6-3.

Ethan Tillotson went 2-for-3 with a double and three RBIs while Trevor Wiedrich added two hits and an RBI as Pavilion downed Dansville in LCAA crossover action.

Tillotson also picked up the win on the mound.

For Dansville, Shane Crandall went 2-for-3 with one RBI while Reid Martin had a hit and scored twice.