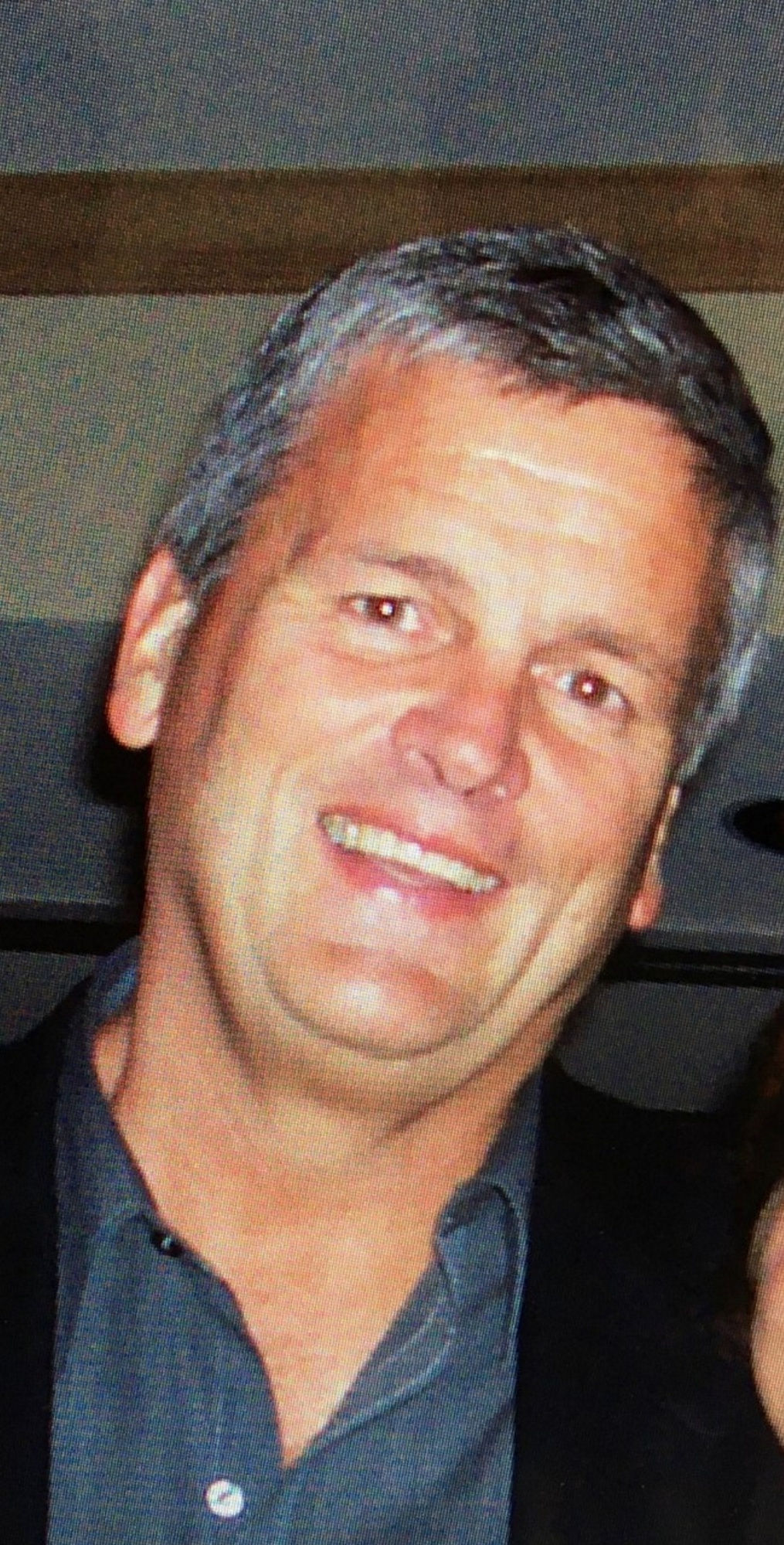 ProvidedJim Keenan was not only Perry’s AD for26 years he was also the LCAA Football Chairman for 25 as most considered it the most competitive small school league in NYS. 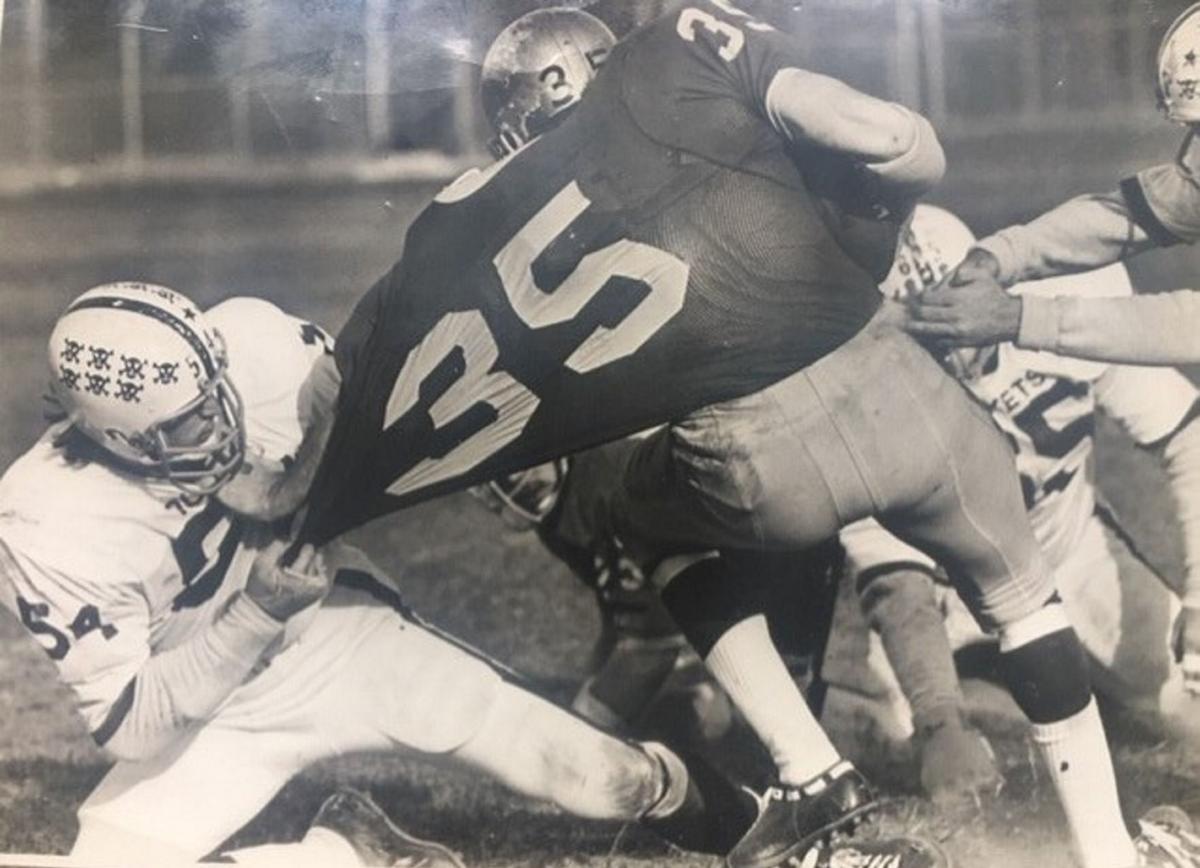 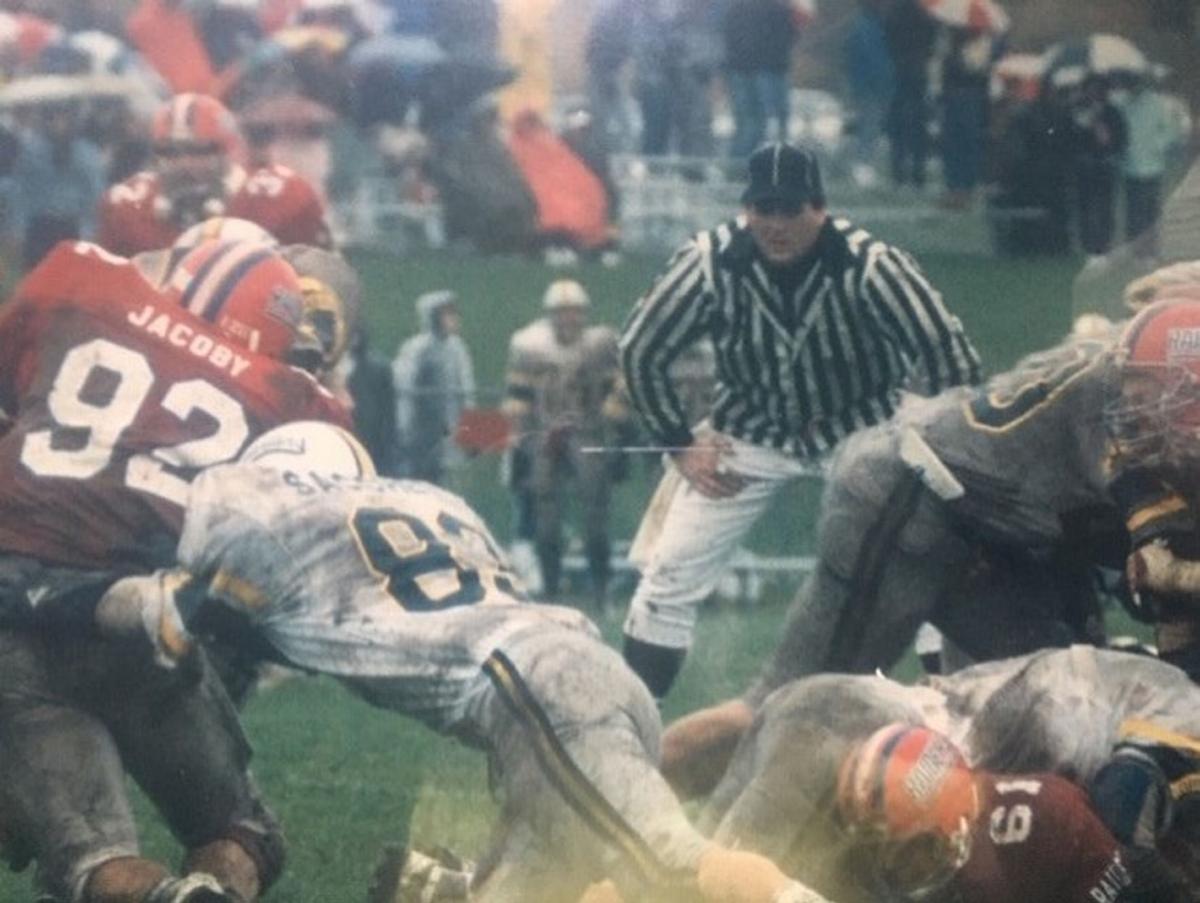 Provided Jim Keenan (83) was a standout defensive player for Slippery Rock University, who went on to win a state title his senior year. 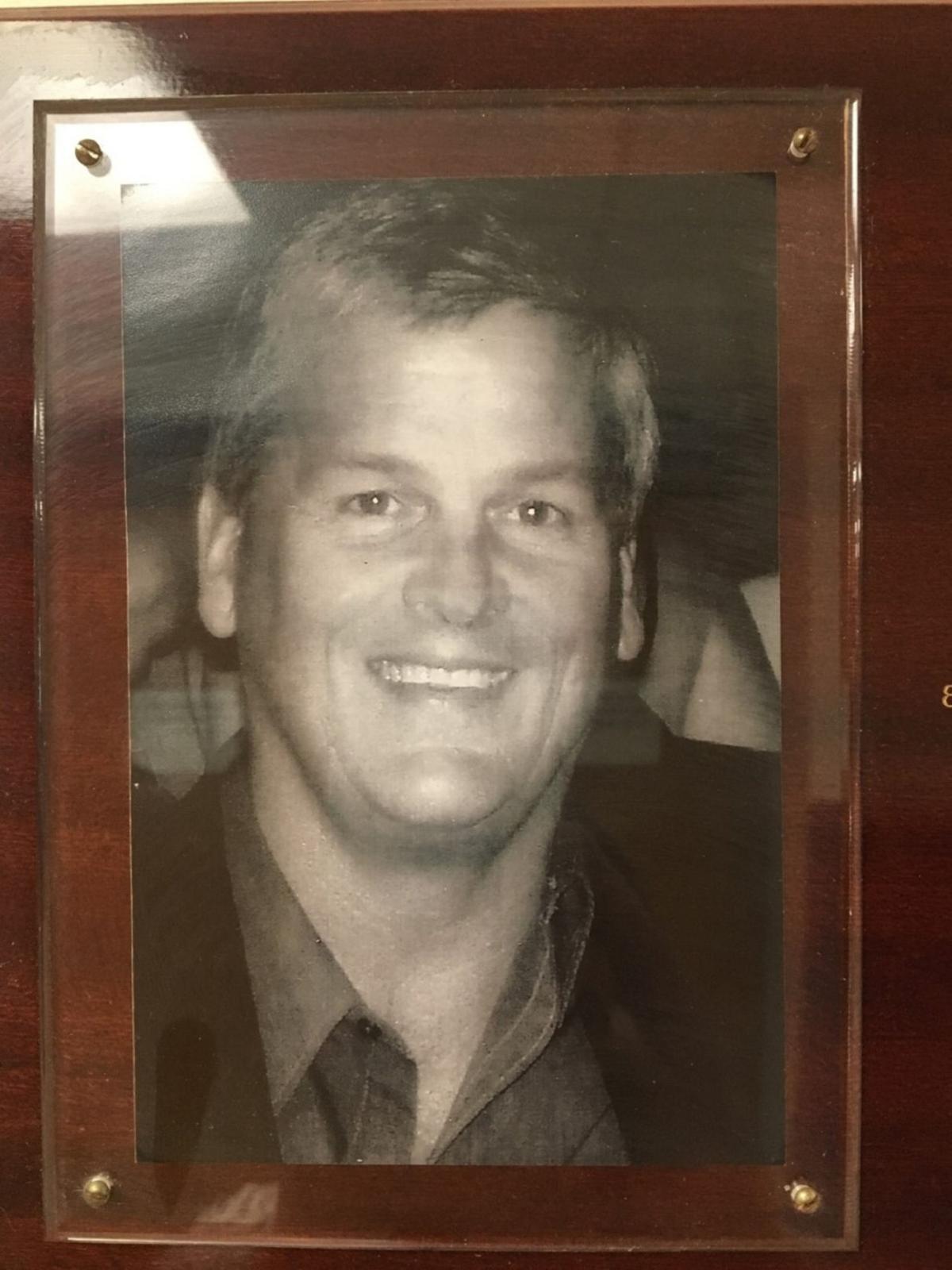 ProvidedJim Keenan was not only Perry’s AD for26 years he was also the LCAA Football Chairman for 25 as most considered it the most competitive small school league in NYS.

Provided Jim Keenan (83) was a standout defensive player for Slippery Rock University, who went on to win a state title his senior year.

PERRY — Before the recent NYS classification schedules came out last year, Livingston Conference football has always been considered one of the most competitive football leagues in the entire state.

For 25 years, Perry Athletic Director Jim Keenan had his finger prints on our local football programs, serving as the LCAA Football Chairman from 1984 until 2009, which to many local football fans was the “Golden Years” in LCAA football.

A strong voice representing Livingston County football, Keenan was directly responsible for all those competitive Friday nights around the league.

“All around New York back in those days when Jim was chairman of Livingston County football, people would always say our league was the best small school league in the state,” longtime Hornell head coach Gene Mastin said. “And there’s no question that Jim Keenan set the tone.”

Mastin, who coached the Red Raiders to three consecutive state titles and numerous Section V championships, described Keenan simply as “one of the best people I’ve ever known and a great leader.”

Mastin, who retired in 2012, considers Keenan’s tenure as Livingston County football chairman, a time when football was at its peak.

“In my opinion, and probably many others’ as well, those were the best years for Livingston County football,” Mastin said. “The thing about Jim was he treated every school in the LCAA like they were the most important. That was just how he made every school feel. He was always very fair, and the results of the league were certainly overwhelming.”

“Jim was one of the people that I have the utmost respect for,” former Le Roy head football coach Brian Moran said. “Whether Jim was putting the schedule together for the old LCAA football or working the sidelines on a Friday night, Jim was always a person that put a smile on your face and you knew you would receive his best effort no matter what you were dealing with through the LCAA and athletics.”

Moran led Le Roy to 14 of their 15 sectional titles and one state championship.

“Jim did a great job as the long-time chairman of LCAA football,” Girolmo said. “Our league won a ton of sectional championships and some state titles under his watch. He was always very organized, and tried very hard to make our job as coaches as smooth as possible. With a group of coaches like we had, that wasn’t always easy, but he pulled it off with class.”

Andy Englert, who has guided the Avon Braves’ football program to four sectional titles, and has been the school’s AD the past 20-plus years, got his first coaching job under Keenan at Perry.

Englert was the wrestling coach for the Yellowjackets.

“Jim was a straight, truthful guy and very down to earth family man,” Englert said. “He would tell you when you were doing good and also let you know when you weren’t. Just a genuine, honest person from the first day I met him.”

In all, Livingston football has captured 69 sectional titles and nine NYS championships prior to this past season’s classification format.

Caledonia-Mumford (15), Le Roy (15) and Hornell (13) have combined for 43 of those sectional championships.

Jim was also a high school football official. He was an official prior to being an AD and then went back later on for a second stint. He officiated up until 2012.

“Jim was very well-respected and a man with great integrity,” fellow official Pete McCabe said. “He was just a great guy who was very professional in his craft. As a football coordinator for Livingston, he took that league to a whole other level.”

“As an official, when Jim was on your game you knew he was going to be very fair and honest,” Mastin said. “He was a model official.”

Jim was born in Pittsburgh, PA., in 1952 and went on to graduate from powerhouse football juggernaut Shaler High School in 1970.

He would go on to Slippery Rock University where he earned a Bachelors of Science degree in Health and Education in 1974. He was a standout defensive lineman for ‘The Rock.’ His college football experience was highlighted by winning the state championship his senior year.

One of his fondest memories came when he attended the Steelers/Raiders NFL playoff game when the “Immaculate Reception” by Franco Harris occurred Dec. 23, 1972 while he was in college.

Jim served in education since 1978, starting full-time for the Perry School District back in 1981.

He served as the school’s athletic director for 26 years — 1983-2009 — where his sports programs captured 81 Livingston titles and 37 Section V team championships. Individually, his Perry student-athletes won 51 sectional titles those years.

While at Perry he also coached football, girls track and baseball.

Keenan was instrumental in putting together several important student-athlete based programs including the Athletic Code of Conduct and 1,000 Points Club.

He was also an influential member for the team that designed and promoted Perry’s Athletic Capital Project.

He was inducted into Perry’s Hall of Fame in 2013.

“Jim was a pillar of strength and stability for the Perry district,” longtime friend and Section V Hall of Fame basketball coach Dave Gillett said. “He had a strength of character that really shined through. During a time when numerous school principals came and went, he was a stabilizer for thirty-some years during a time when he was also the athletic director and dean of students. He steered the ship. Jim Keenan was the heartbeat.”

Sadly, Jim’s first wife Virginia passed away back in 2000 when all three of their sons were still in high school or elementary school.

“That was a very difficult time for everyone — Jim had to raise those three boys on his own,” Gillett said.

Those three young men today — Jimmy, Greg and Jack — all went on to become teachers — following in their dad’s footsteps.

Their mother ‘Ginny’ was also a teacher.

Jimmy is a teacher in the Rochester School District while Greg and Jack are currently at York and Kendall respectively.

“That says volumes who Jim was right there,” Gillett said. “They all wanted to follow him into teaching. What an incredible role model he was to his family.”

Mastin recalls the days when his wife was battling cancer around the same time Jim’s wife was going through similar issues.

“We would literally spend hours on the phone together talking,” Mastin said. “We were both going through the same thing and it was nice to talk with someone you trusted and could relate to what you were also going through.”

Gillett described Keenan as “very supportive and loyal to all his coaches.”

Gillett insisted that Keenan wasn’t one to tell you what you wanted to hear, or a play the middle kind of guy. He was a straight shooter and if there was a problem he would pull you into his office to talk about it, improve and move forward.

“Jim really worked with his coaches and really encouraged creating opportunities for kids — all the kids,” Gillett said.

After retiring in 2009, Jim would re-marry his current wife Pamela, where they lived in Fairport.

“He brought love, joy, and happiness to those around him, and he will be terribly missed by those of us who loved him,” Pamela said.