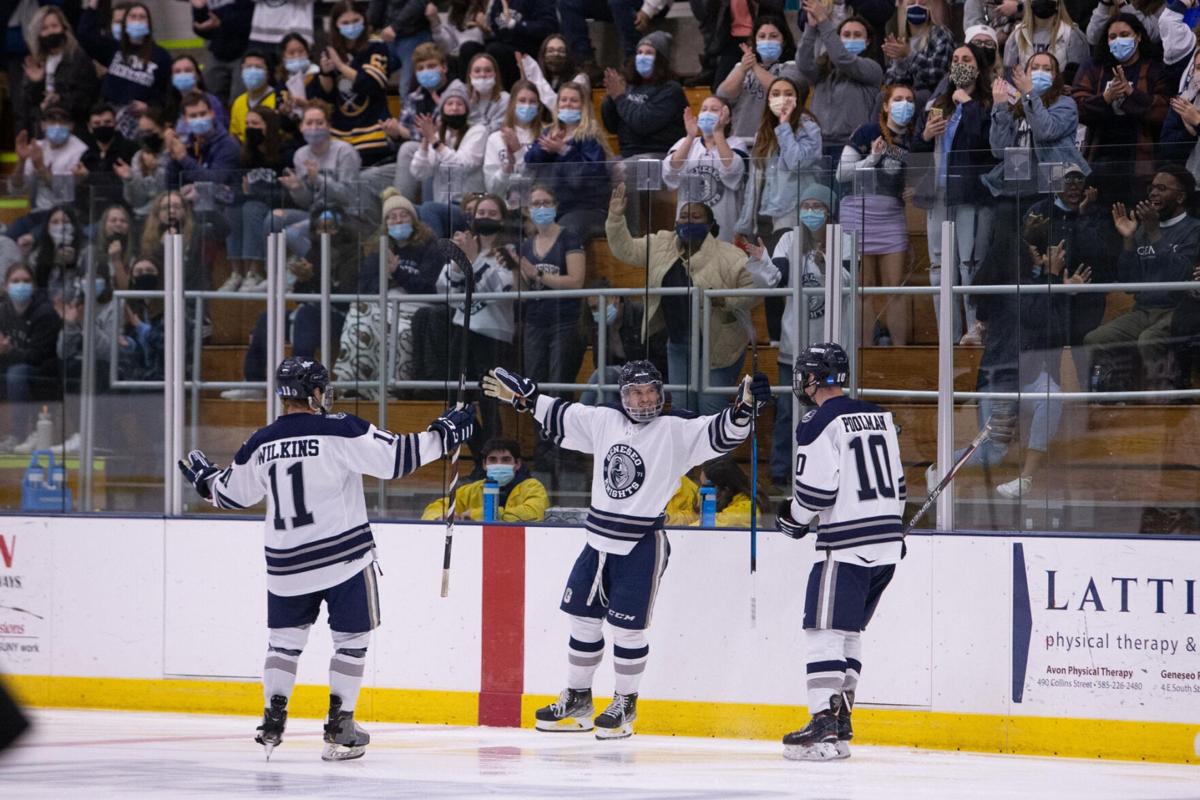 SUNY Geneseo Photograph A trio of SUNY Geneseo hockey players celebrate a goal during the Knights’ 7-0 victory against Nazareth on Oct. 30. The Geneseo squad is also celebrating being named this week the nation’s top Division III hockey team. 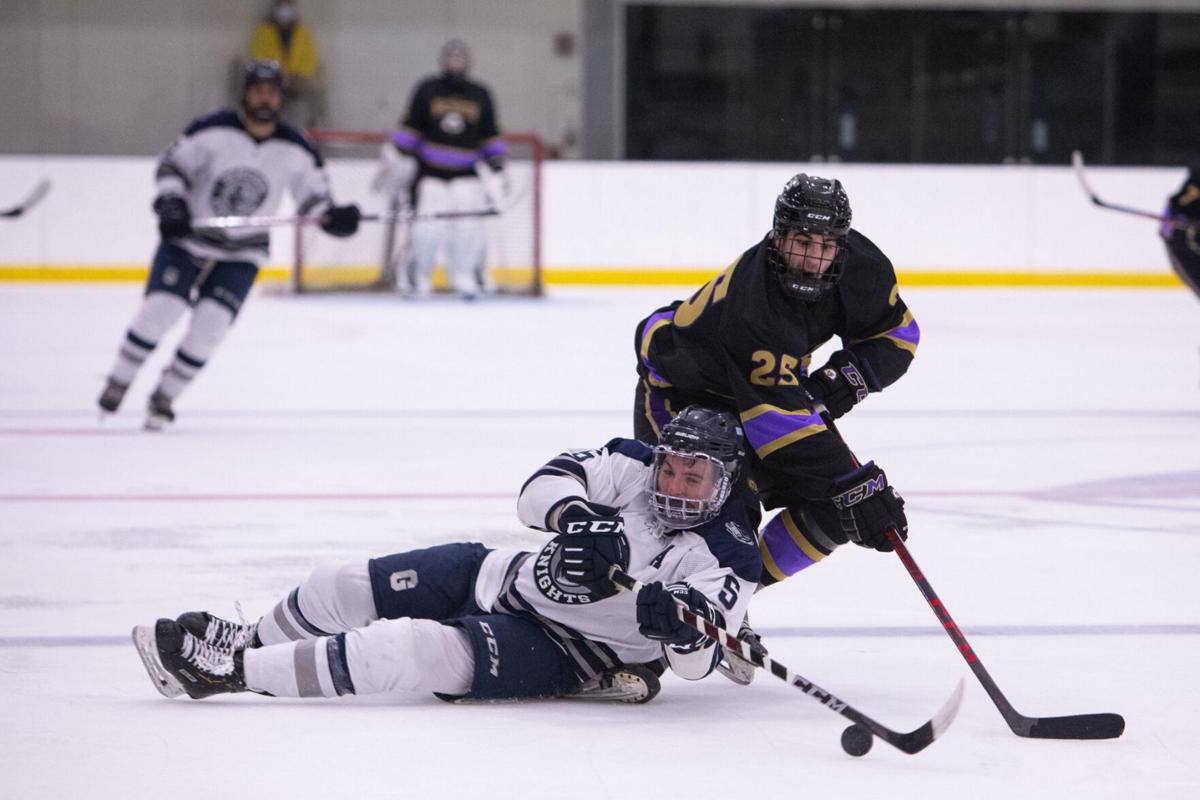 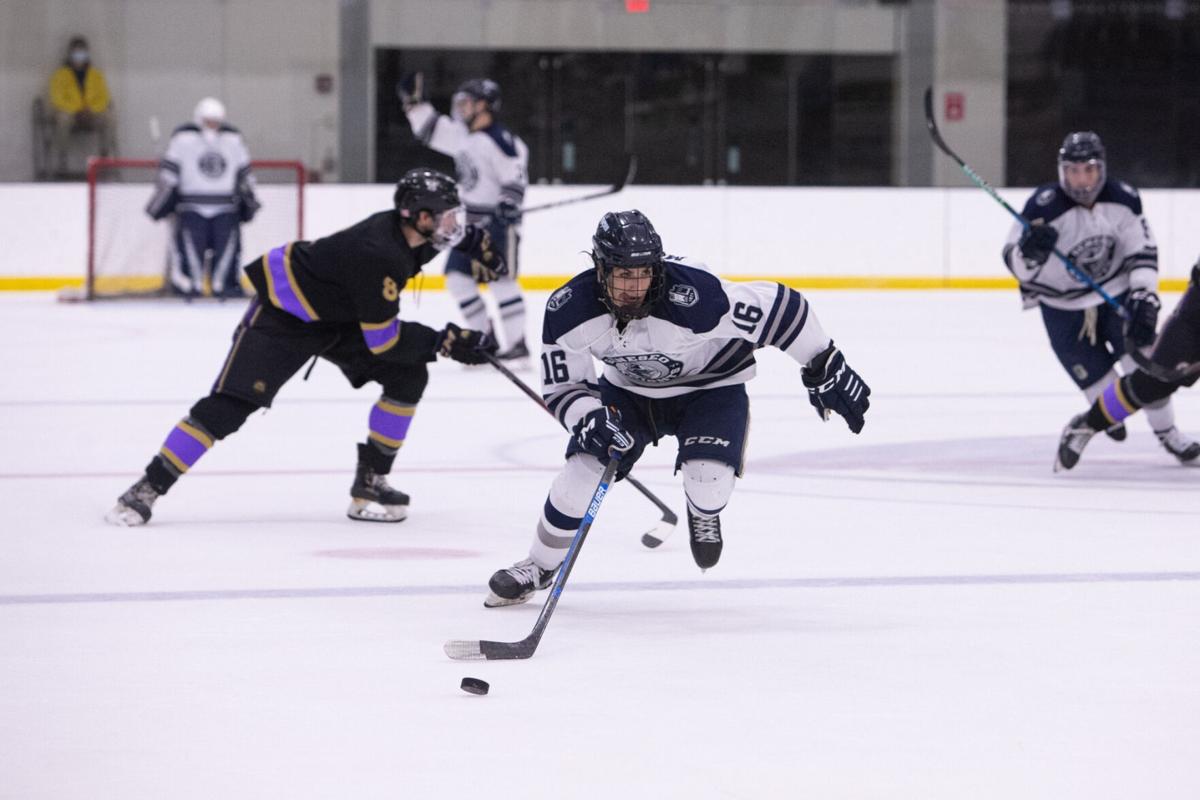 SUNY Geneseo Photograph A trio of SUNY Geneseo hockey players celebrate a goal during the Knights’ 7-0 victory against Nazareth on Oct. 30. The Geneseo squad is also celebrating being named this week the nation’s top Division III hockey team.

GENESEO – The SUNY Geneseo ice hockey team, which has opened the season with three straight wins, finds itself ranked No. 1 in a national poll this week for the first time in 30 years.

SUNY Geneseo was voted No. 1 in the United State College Hockey Online Division III poll. It’s the first time since the 1990-91 season that the Geneseo team has had the top spot. The poll was announced on Monday afternoon.

The Knights opened the 2021-22 campaign with a 3-0-0 record, including victories over Neumann, Nazareth and SUNYAC conference rival Morrisville. Geneseo received nine first place votes out of 20 total to edge the incumbent top team, Norwich.

Junior forward Justin Cmunt leads the Knights with four goals on the year and ranks first in the nation with three power play goals, one in each of the Knights’ first three contests. Geneseo’s power play has been the best in the nation so far, scoring on half of its chances (6-for-12) for a .500 power play percentage.

The Knights rank third in scoring margin (4.00), fourth in scoring offense (5.67) and fifth in team assists (29). In three games, Geneseo has scored 17 goals while allowing 5.

Geneseo will host Plattsburgh at 7 p.m. Friday and Potsdam at 7 p.m. Saturday. Due to the continuing bleacher renovation project, crowd capacity will be limited to 800 spectators for the games.

The bleacher renovation project on the east side of the arena is complete (the west bleachers will be closed) allowing for the following capacities:

n Parents/families of Geneseo, Plattsburgh (11/12) and Potsdam (11/13) student-athletes and staff (“will call” list at front gate)

n Remaining seat back capacity will be sold as Reserved

n Limited remaining capacity will be sold as General Admission

All spectators must remain masked throughout the duration of their visit inside the Merritt Athletic Center and Ira S. Wilson Ice Arena regardless of vaccination status.

Food and beverage is not allowed in the Ira S. Wilson Ice Arena during the contest and there will be no concessions or vending to discourage unmasking.