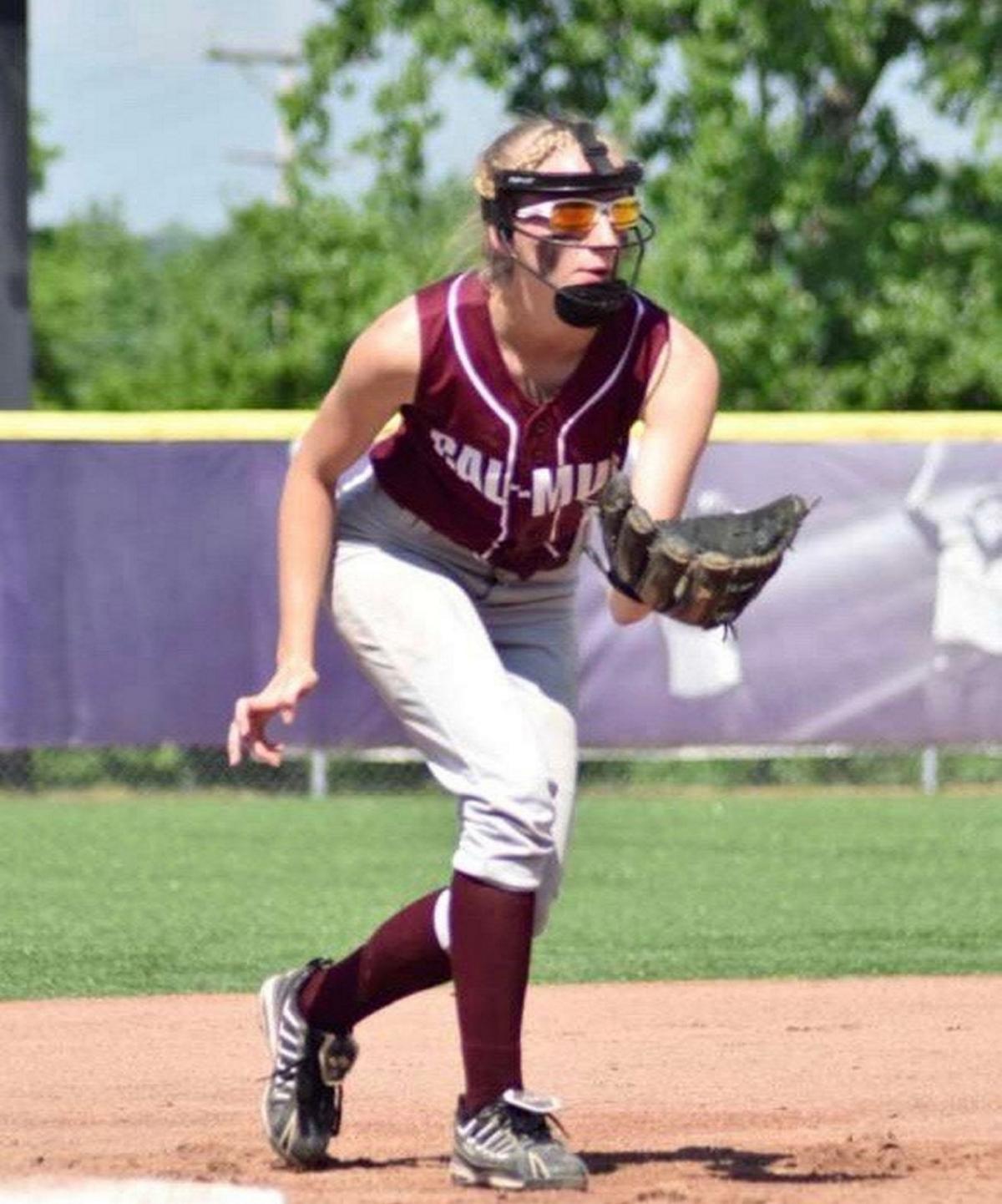 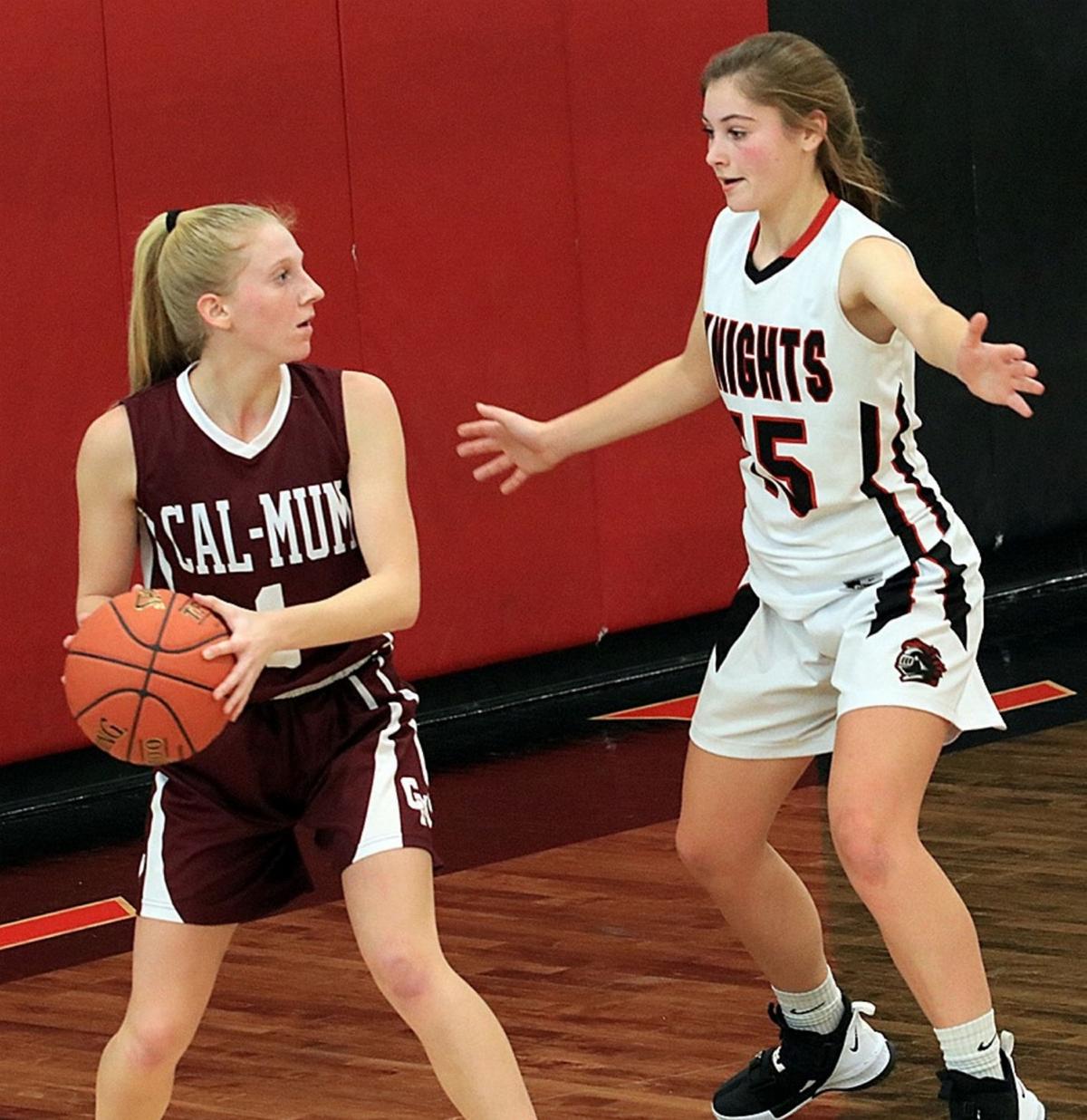 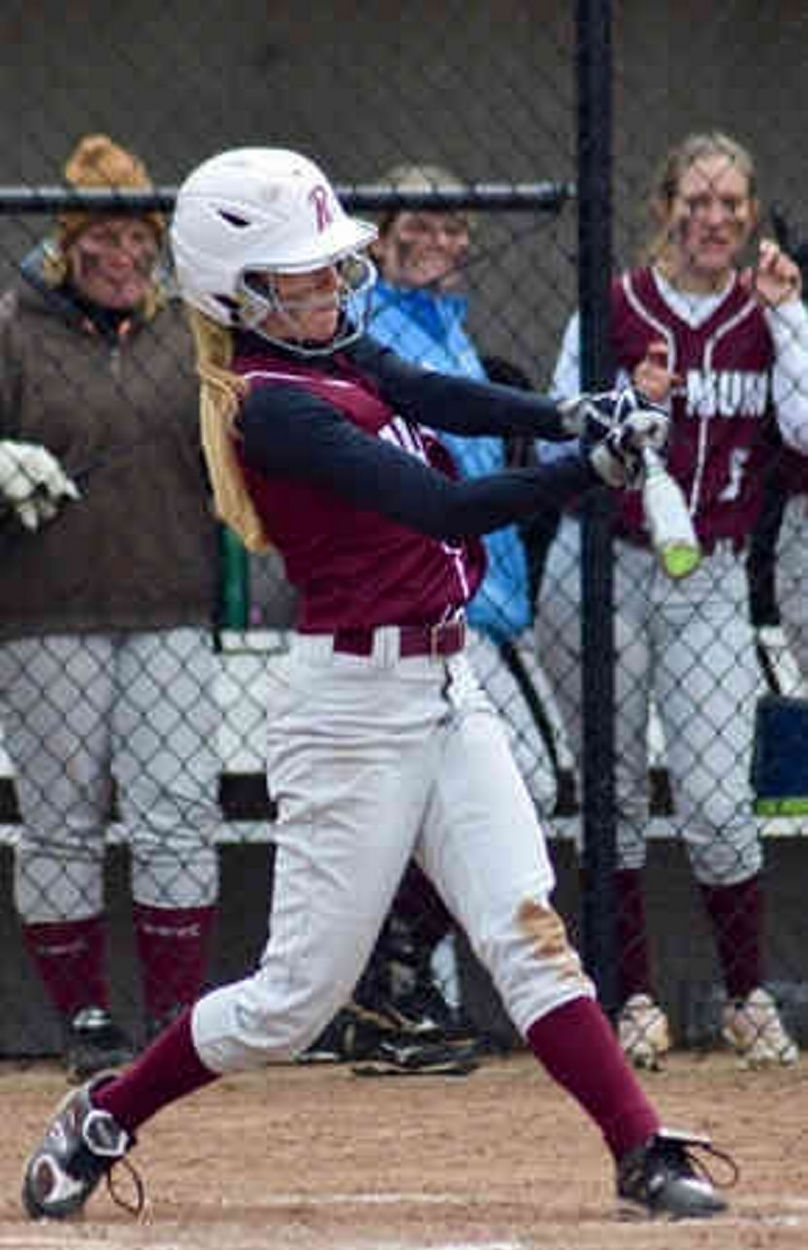 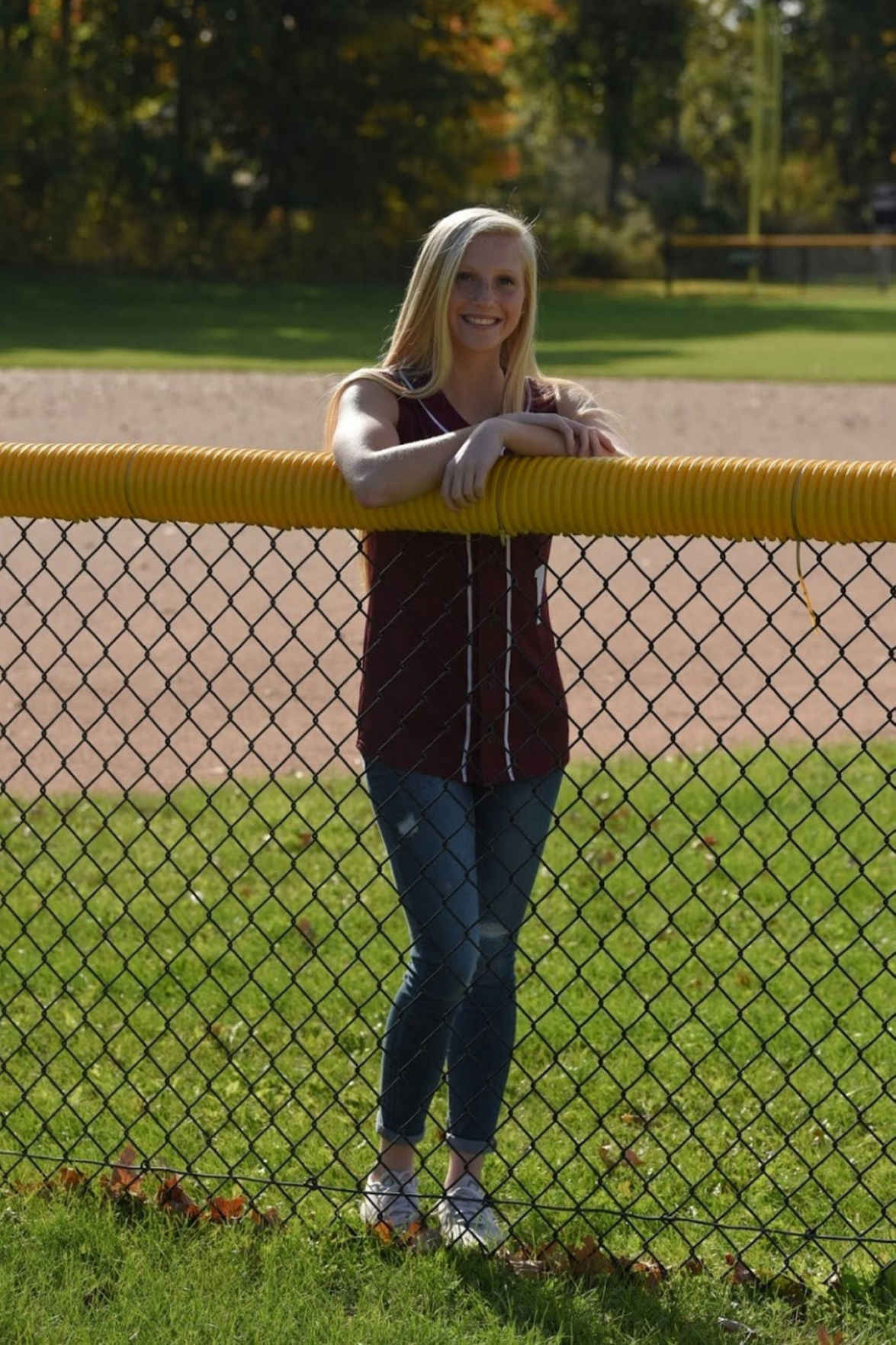 CALEDONIA — A three-sport star at Caledonia-Mumford, Grace Walker is no stranger to the local varsity scene. A talented soccer and basketball player, Walker has made her name known for the Red Raiders for years.

Yet it is the spring in which she has really shined, however her time on the diamond at Cal-Mum appears as though it will be unceremoniously cut short because of the COVID-19 pandemic. Certainly not a fitting end to one of the greatest careers in Red Raiders softball history.

“Grace is such a well-rounded athlete,” Cal-Mum softball coach Dan Dickens said. “She is a three-sport captain and does the right things off the court and field with her decision making. She is the president of the senior class and just a great person; those are going to be some big shoes to fill.”

Big shoes for sure.

Before her senior year even began, Walker committed to play Division I softball at St. Bonaventure University when she signed to be a Bonnie back in August. And though she had already been a four-year starter for Dickens and the Red Raiders, Walker knew that she still had some more work to do this spring.

“Last year was definitely tough but in the offseason I know myself, as well as a lot of the other girls, started to play travel softball and we were working really hard to get to the big goal of this year,” Walker said. “We dropped a division (in the LCAA) and our sectional class was a little easier so it would have been a big year for us for sure. We’re just trying to keep working in case it does happen.”

A slick-fielding shortstop and a tremendous hitter, Walker was a key factor in leading Cal-Mum to a pair of Section V titles in 2016 and 2018 and she wasted no time making her mark on the program when as an eighth-grader she hit .300 with 24 hits and 24 runs scored along with 13 RBIs to help Cal-Mum to the sectional crown; those numbers would only get better.

She hit a scorching .437 as a freshman with 31 hits and 35 runs scored, while she also added eight triples and two home runs that season and she followed that up with an impressive sophomore campaign when she hit a red-hot .511 with 48 hits and 58 runs scored while ripping 20 extra base hits including five home runs.

To go with the two sectional blocks, Walker’s first three seasons saw the Red Raiders go an incredible 63-14 in the ultra-difficult Livingston Conference. Though it was last spring’s disappointing campaign that had Walker looking forward to her final season in the maroon and white.

“When I was in eighth grade we were on top of the world,” Walker said. “We went to states which was an amazing experience but after that we lost a lot of good players. But I think we were on an uphill rise right now I think. I watched a lot of girls when I was in eighth grade have awesome senior years and thinking about it now, that that was how my senior year would have been, it’s kind of sad.”

With a young team that featured nine players in their sophomore year or younger, the team limped to a very un-Cal-Mum-like 7-13 in 2019. Walker did her part as she hit .444 on the season with 28 hits, 21 runs scored and eight doubles, but she definitely didn’t want her final season to go down the way it did.

“It’s a letdown, for sure,” Walker said. “It’s the season you look forward to. You’re supposed to be your most successful in your senior year but unfortunately we may not get to see that. I’m keeping my hopes up but it’s sad to see that we might not have the whole big picture of five years.”

Yet despite the disappointment that has come with this spring, Walker is really trying to keep things in perspective. She may be missing out on the final season of the sport she fell in love with years ago, but there’s a bigger picture involved.

“It’s been different for sure. It’s taken a lot of getting used to and I keep thinking to myself that this is setting a precedent for new times,” she said. “I’m missing out on a lot of stuff but it’s better for everyone, as a whole, that we’re in this situation. So if staying home and not being able to play my senior year of softball is helping other people then that’s OK.”

And for Coach Dickens, he has seemingly known this about his star infielder for years, five in fact when he pulled her up to the varsity squad half a decade ago. Two years later she was a captain as a sophomore and had to grow up on the fly.

“Grace has a really outstanding work-ethic that has helped her be successful — on and off the softball field,” Dickens said when she signed to Bonaventure. “Her character is second to none and she is a great role model for all the girls at Cal-Mum. She’s able to balance her academic and athletic commitments. She also is very involved in student run activities and volunteers to help around the school with whatever is needed.”

Walker had a ton of talented players to look up to while she was winning all those games and the pair of sectional titles. She didn’t want to copy them, per se, but she definitely wanted to learn.

“I was really grouped in with a lot of the older girls and I really had to step up,” Walker said. “I looked up to a lot of the girls like Mackenzie Wilson, Hannah Anderson, Emily MacDonald, all of those girls who played for Cal-Mum. I really wanted to follow in their footsteps.”

This past fall the Red Raiders girls soccer team didn’t have the season that they have become accustomed to under longtime head coach Chad Schalk. Cal-Mum finished at just 3-12-2 with a first round sectional loss but Walker didn’t disappoint.

In goal she finished with 161 saves and a save percentage of 82.2, while she allowed just over two goals per game on what was a relatively inexperienced team.

Another rough season followed in the winter when the Lady Raiders went just 4-17 on the hardwood, though they did win their final three regular season games. For her part Walker averaged 6.1 points, three rebounds and two assists per game.

However, spring is her season.

“In seventh grade I started to play travel ball and I really loved it,” Walker said of how she gravitated to softball. “I really wanted to be on varsity like all of those girls. So I worked my hardest and eventually I got there.”

And with that goes along with the mystique of playing sports at Cal-Mum High School.

“You just hear that Caledonia is a tradition of excellence in sports,” She said. “As long as I can remember there’s been great athletes and we’ve been winning sectional titles and to be a part of something so special like sports in high school is a memory that I will never forget.”

Right now she’s able to speak with other players at St. Bonaventure and the coaches, as long as it isn’t specifically about softball. They speak of mental toughness and simply getting to know each other as those are the teammates you will be spending the next few years with on the diamond.

Right now, though, there is only one thing on Walker’s mind that she wants to do when this is all over with.

“I know this might be stereotypical but I just want to play softball, I want to play a softball game very badly,” she said.

Here’s to hoping she gets one more high school chance.