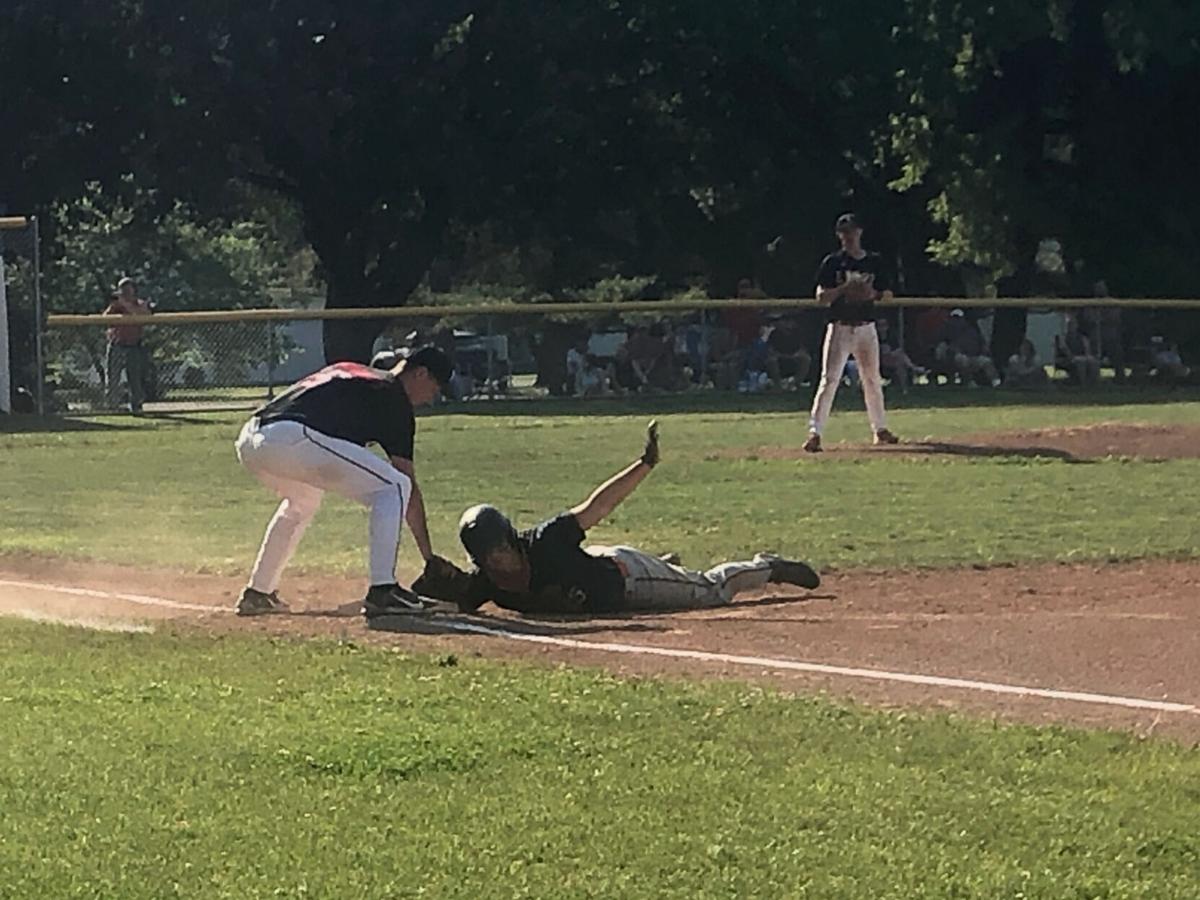 Daily News Photo An Attica baserunner calls for time after diving back into first on Wednesday. 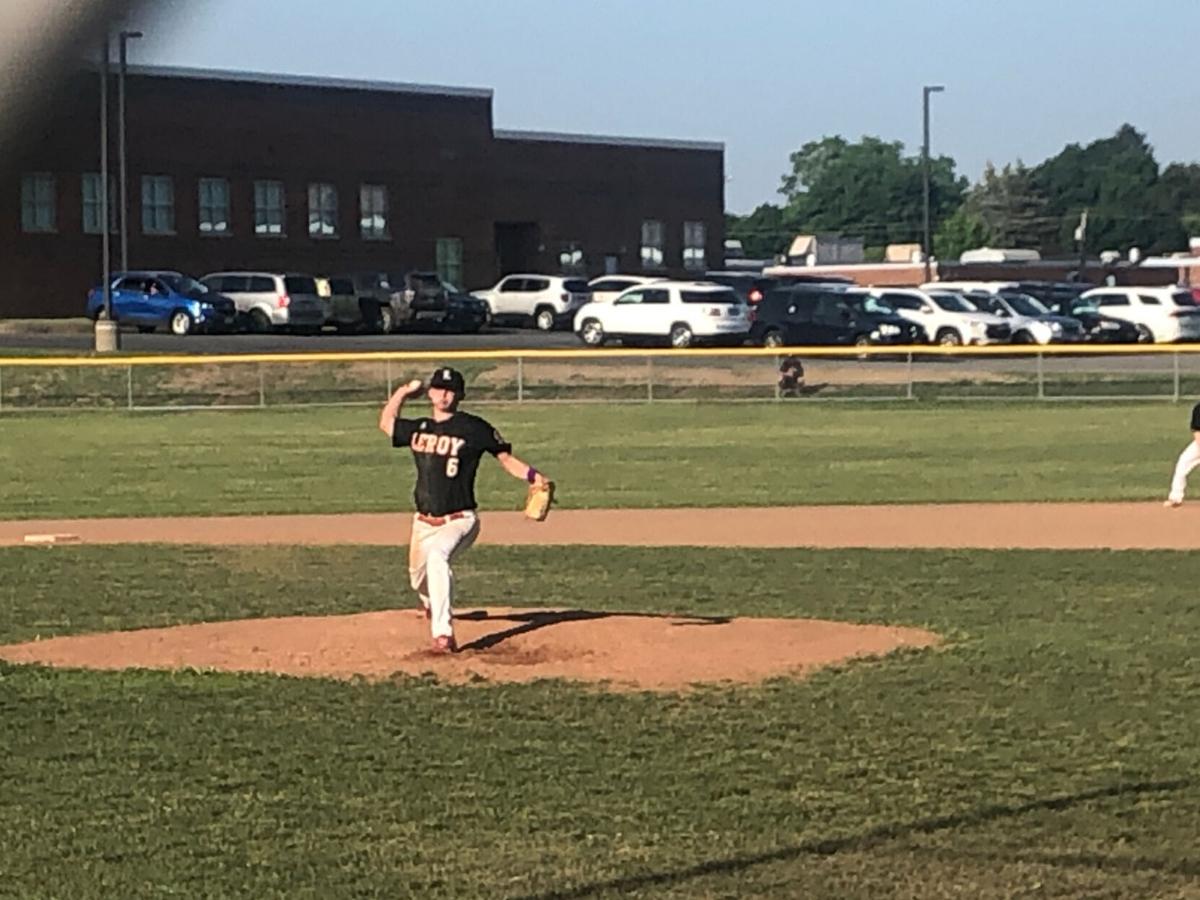 Daily News Photo Kenny Saunders pitched a complete game in a win over Attica in the Class B2 quarterfinals on Wednesday.

Daily News Photo An Attica baserunner calls for time after diving back into first on Wednesday.

Daily News Photo Kenny Saunders pitched a complete game in a win over Attica in the Class B2 quarterfinals on Wednesday.

ATTICA — It’s been a couple of years, and some people may have forgotten, but Le Roy is still the defending Section V Class B2 champions. And after an up-and-down regular season, it didn’t appear that the Oatkan Knights would be putting up much of a fight this postseason in trying to make it two in a row.

Kenny Saunders was in complete control all game and Andrew Loftus had a huge bases-loaded, bases-clearing double that broke the game open as No. 8 seed Le Roy upset No. 1 seed Attica 6-2 on Wednesday afternoon to advance to the Class B2 semifinals.

Including a win over Dansville in the sectional opening round, Le Roy has now won four games in a row in dominant fashion to keep its hopes alive for a repeat.

“Talking to the guys this season about the schedule we had, playing in (LCAA) Division I, getting beat up a little bit, believing in each other and understanding that confidence is hard to break,” Le Roy head coach Ieon Koukides said. “Nothing was intimidating for us coming here. We knew that we had Kenny on the mound controlling game and we would put the bat on the ball, which we have been doing the last couple of games.”

Saunders didn’t allow a hit until the fifth inning in shutting down a strong-hitting Blue Devils squad, while he allowed three hits in all, striking out eight and not walking a batter as the Oatkan Knights evened their record this season at 9-9.

And after some early frustration, the Le Roy offense was eventually able to get to Attica starter Zach Strzelec.

Via a walk, a pair of errors and a hit batter, the Oatkan Knights loaded the bases with one out in the first before Strzelec struck out a pair of escape the threat. In the second, Tyler Strollo would reach on an error and steal second but would eventually be stranded due to two more Strzelec strikeouts.

Brock Flint ripped a leadoff single to left to lead off the frame and Saunders followed with a double to deep right-center to put runners at second and third with no outs. John Panepento then reached on an infield single to third to load the bases.

Strzelec then proceeded to walk freshman Jackson Spezzano to bring home a run but with the help of two more strikeouts and a grounder to third, the Attica starter somehow wiggled out of any further damage.

In the fourth, the Oatkan Knights once again loaded the bases, this time on singles from Flint and Robbie Newmark and a one-out walk to Saunders.

Panepento followed with a walk to force in another run to make it 2-0 but Strzelec looked as though he would escape further damage when he struck out Spezzano and had Loftus in a two-strike hole. However, the lefty absolutely drilled a ball to left-center than cleared the bases and gave the Oatkan Knights a relatively comfortable 5-0 advantage.

“That was an enormous hit and something we have been looking for from Andrew, who just came back to baseball,” Koukides said. “It’s about having the kids believing that I believe in what they’re doing and for them to believe in themselves, even with two strikes on you you can make something happen.”

In a huge, shut-down inning after he was staked to the five-run lead, Saunders set Attica down in order in the fourth.

Drew Cusmano finally got the Blue Devils on the board in the home half of the fifth with an RBI single that scored Wyatt Kauffman but the Oatkan Knights came right back in the top of the sixth to get the run back. Saunders walked, stole second, went to third on a wild pitch and scored on a Spezzano sacrifice fly to make it 6-1.

With two outs, Attica was able to get something going in the bottom of the sixth inning when Ian Romesser singled and Jake Dressel reached on an error. Kauffman followed with an RBI single to center to make it 6-2 but Dressel was thrown out trying to go to third on the play to end the frame.

Saunders worked around a two-out walk in the seventh to shut the door.

Strzelec struck out seven over his four innings of work, while Dan Bialek allowed just one run on one hit, while he struck out three, in three innings.

The Fighting Irish scored seven times in the third and got a strong start from Bryceton Berry as they rolled into the semifinals.

Ryan Fitzpatrick led the offense with four hits and four runs scored, while Gavin Schrader had three hits — including a double and a home run — and three runs batted in.

Berry struck out seven over four innings of work, while Schrader, Fitzpatrick and Vin DiRisio all tossed a shut-out inning, combing for six strikeouts.

“Great start to sectionals,” Notre Dame head coach Rick Rapone said. “Everything was right were it needed to be. We did the most important thing which was to win and advance. I am proud of the boys they were ready to go from the first pitch.”

The Trojans had the top seed on the ropes as they scored twice in the seventh to close the game to one and had the bases loaded with one out but were unable to scratch another one across in the heartbreaking loss.

Jake Laney led Alexander at the plate as he went 3-for-4 with three doubles and two RBIs, while Josh Merrill was 2-for-4 with an RBI.

“I couldn’t more proud of how these guys battled all day long,” Alexander head coach Ben Whitmore said. “We were one more hit away from upsetting the one seed and moving on in sectionals. That is frustrating, but the result doesn’t take away from what a special group of guys we have who competed hard today and all season long.”