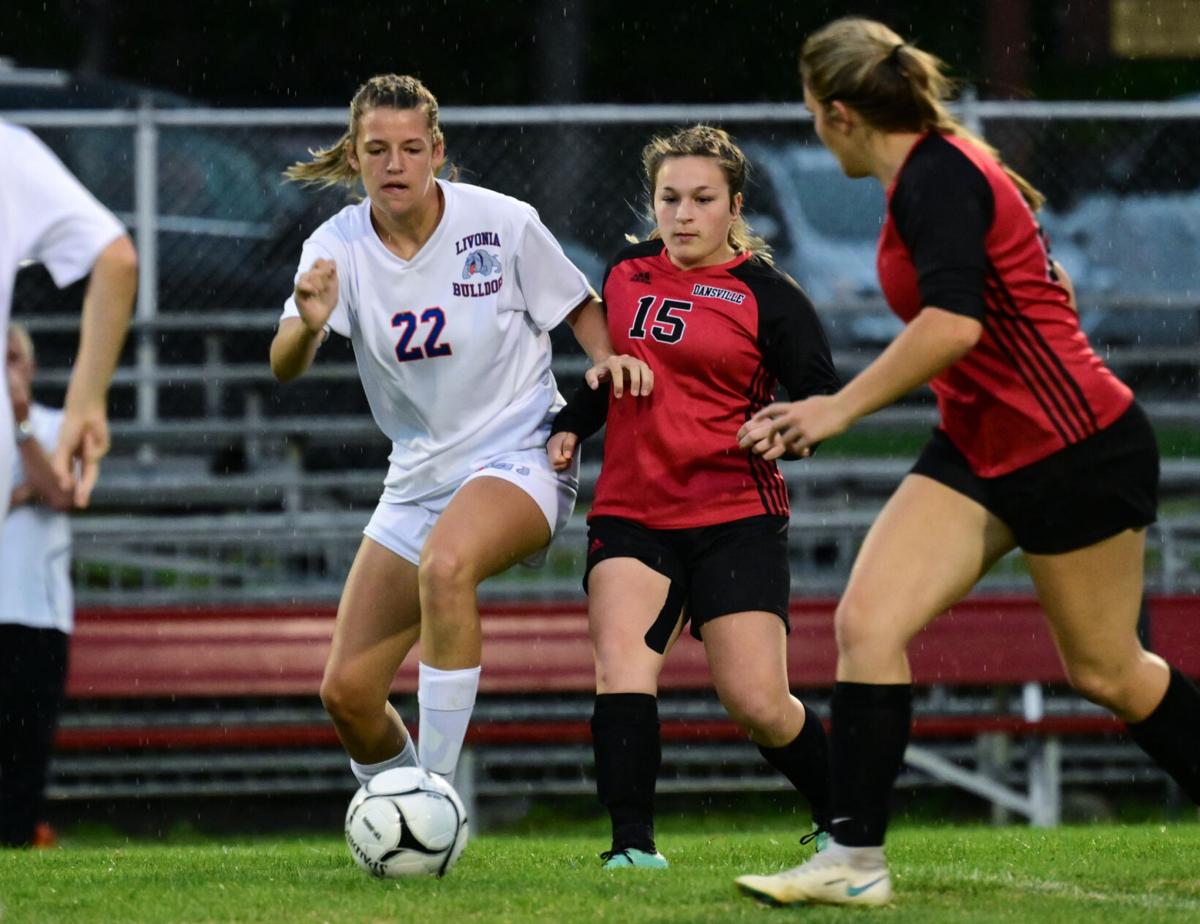 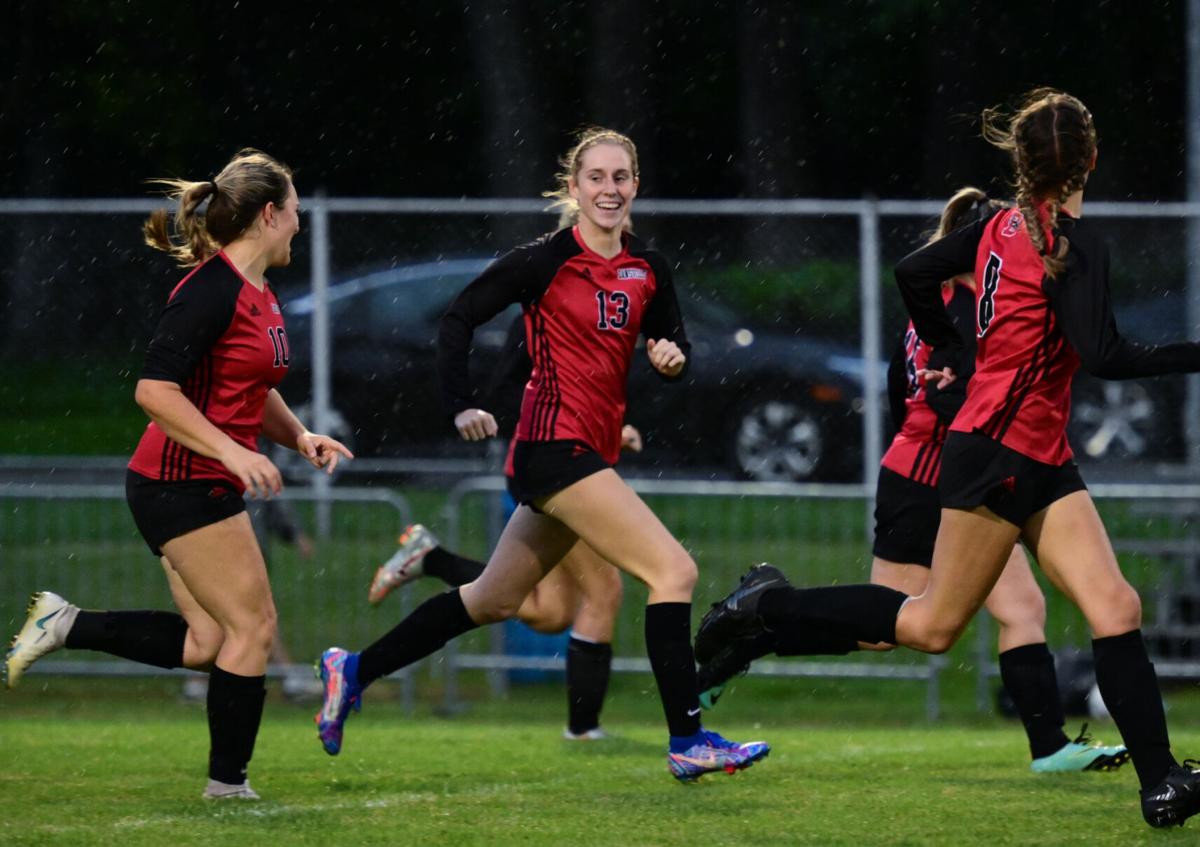 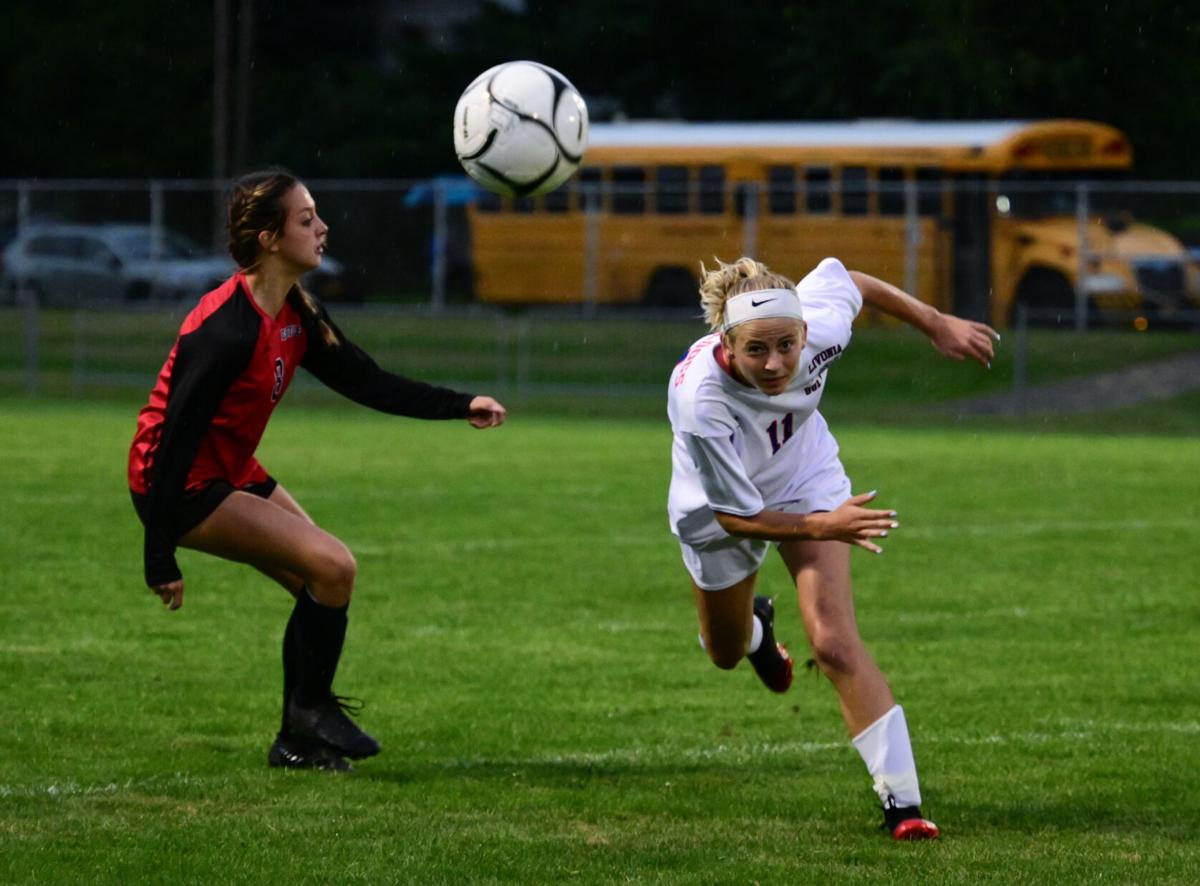 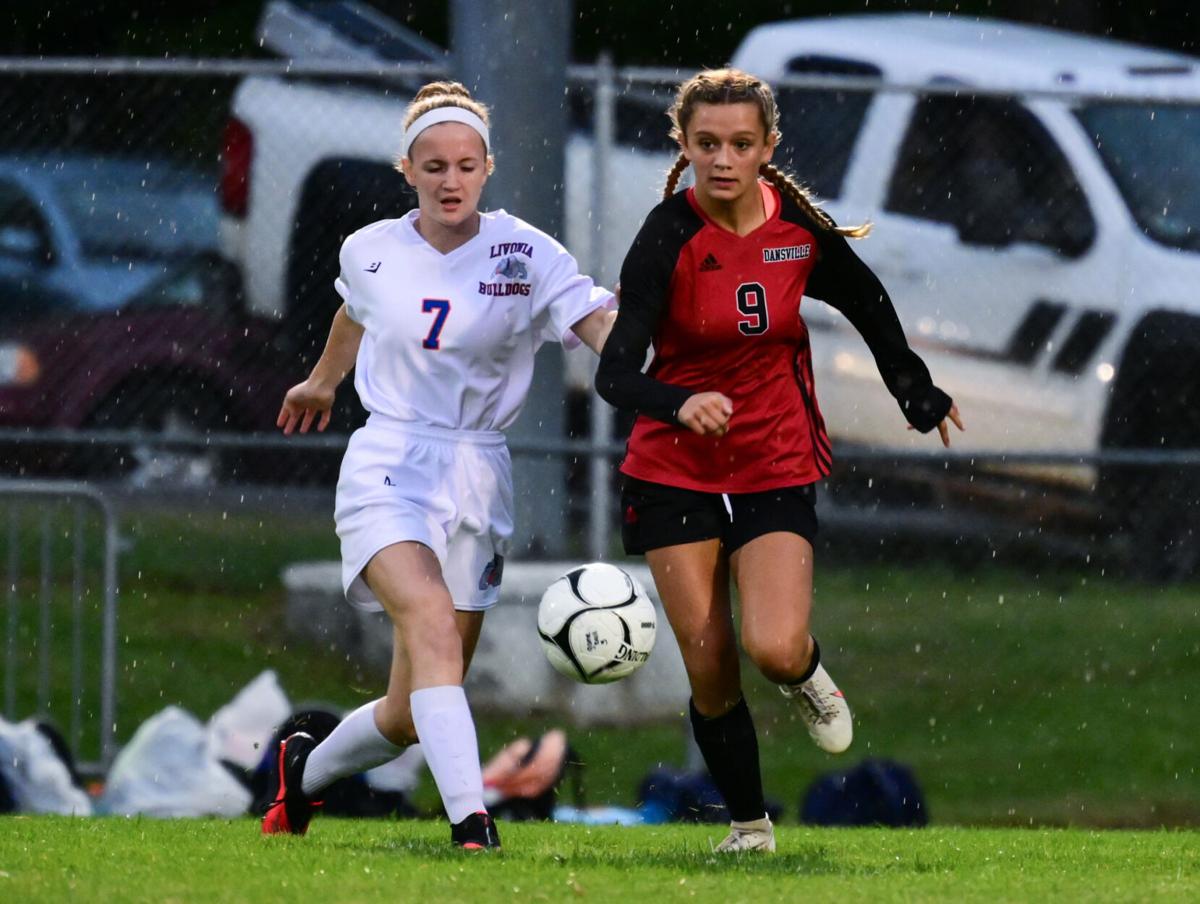 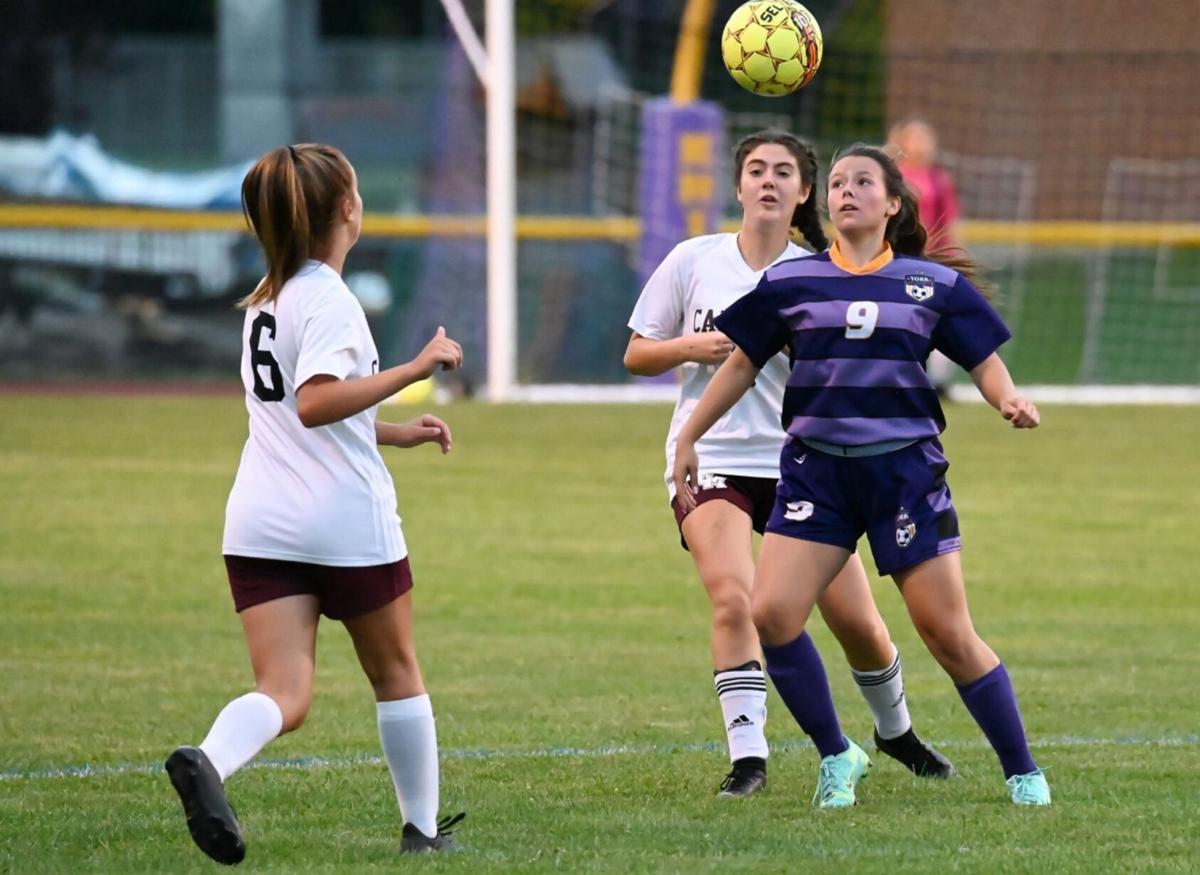 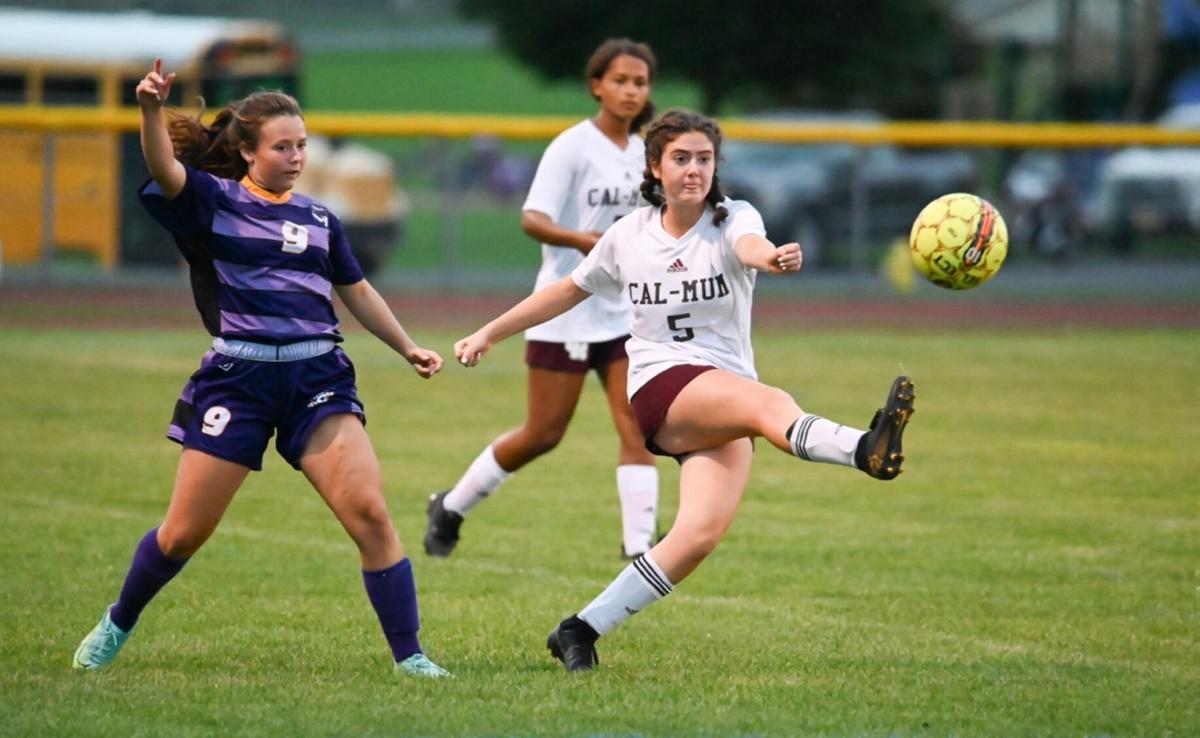 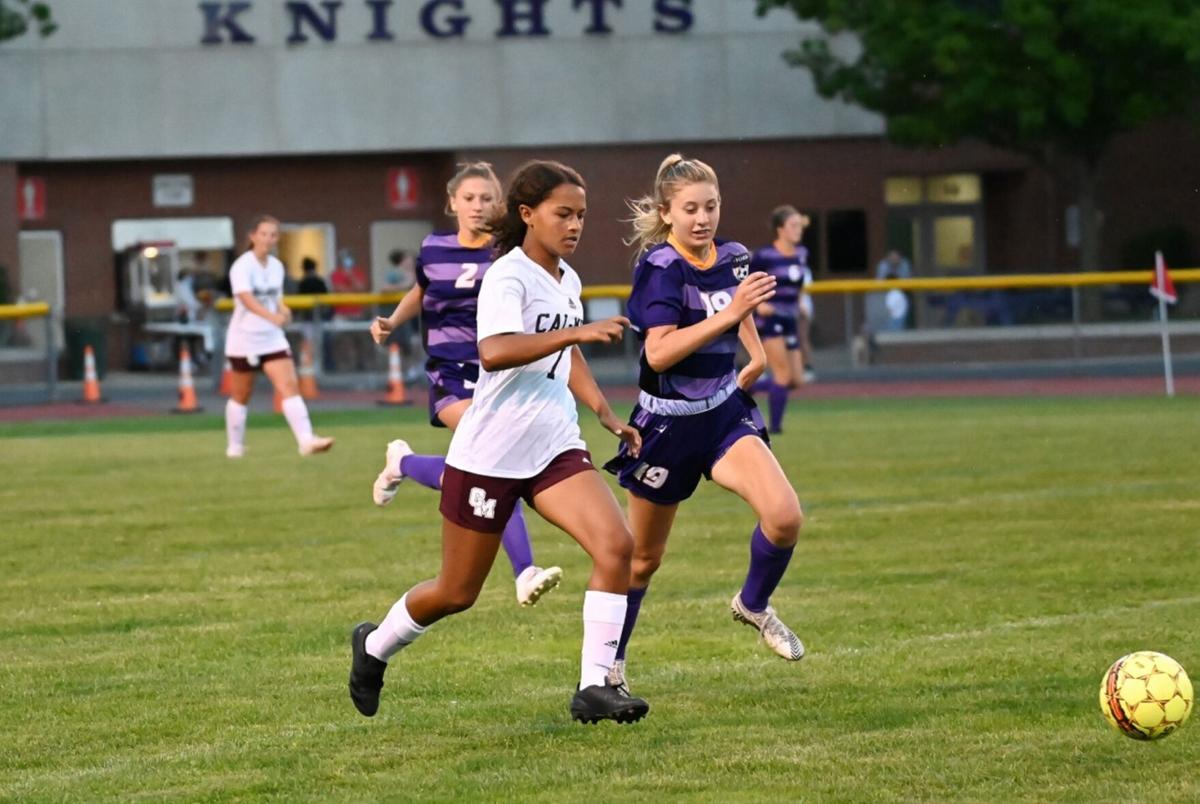 DANSVILLE — The encore is expected to be just as good.

And just as physical.

When Dansville and Livonia girls soccer have gotten after it the past few years, things have gotten pretty intense, even borderline overly aggressive.

Monday was no exception as Maddie Failla was credited with the lone goal of the game, just three minutes in, as unbeaten Dansville held off Livonia 1-0 in LCAA action Monday night at Ralph Clements Field.

There were not many scoring opportunities in this game, but Failla, the senior captain, took advantage of hers as she dribbled up the right side and blasted into the box that caromed off a Livonia player and past keeper Mary Kwak for the early 1-0 lead.

That was all that Dansville’s defense needed as Abbey Belcher posted her fourth straight shutout with nine saves, althougn only a few of those saves were tough.

Of Dansville’s four victories, all shutouts, this was by far their most competitive contest having outscored the previous three by a combinbed 23-0.

Monday was no walk in the park as Livonia also brought some physicality to the pitch, drawing a few yellow cards for their aggression.

But Dansville coach Arin Belden’s group just stuck to the game plan and it all worked out.

“I am proud of my girls tonight,” coach Belden said. “It is always a close, physical and intense battle when we play Livonia. Tonight was no exception. I told the girls at halftime that defense was what was going to win us the game and I thought they did just that. They stayed composed and disciplined. I am especially proud of my back four who are fairly young and still learning. We have a long ways to go and things to work on for sure but tonight was a good win for us against a division opponent.”

Meanwhile, for Livonia, head coach Mark Stephens was proud of his team, who fell to 1-6 on the year suffering their fourth straight one-goal loss, including Saturday’s OT loss to Geneseo.

Back up keeper Kylei Waters stepped in when Kwak was injured and “played great” Stephens said.

Stephens said don’t count his girls out just yet.

“Give this group of girls some time,” he said. “We’ve got plenty of games left to get to where we need to be. The losses are there, the last four games we have dominated and played well. We need to stop giving opponents goals, that is what we are doing. Handing them goals. These girls are working hard, playing hard and it will come together. September is great for wins. October is when things need to be running on all cylinders, and we will be running. I have confidence in this team to be where we need to be come mid-October. We don’t play the easiest schedule by any means, we will take our losses and move on. You don’t win a block in September.”

After a scoreless first half, Peytyn Geer and Alaina Englert scored goals after the intermission as the Lady Knights got the victory.

For the junior Englert, it was her first varsity goal.

Sydnee Emerson dished out both assists as York improved to 4-0.

York keeper Libby Voisey had a solid game with 15 saves for the shutout.

In a rematch of last year’s Section V Class C1 title game won by Avon, Warsaw got the victory on goals from Morgan Langdon, assisted by Carly Wick, and Chloe Hubbard, unassisted.

Rollins scored midway through the first half assisted by Morgan Wolcott.

Matthews tallied her goal just after halftime off an assist from Maddie Mark.

“It was great to be able to open divisional play with a win,” Geneseo coach Nick Drollette said. “The girls executed the game plan well and worked very hard. As a young team I am always hoping to see improvement each time out and I have definitely seen the girls raise the bar each game.”

McKenna Kelly scored two goals, both in the first half, as Perry blanked M-M Monday.

She made it 2-0 with 15 minutes left in the first half when she scored off an assist from Lydia Chiappone.

Megan Gates and Alezya Brown scored goals as Kendall got the rivalry victory.

Gates scored 16 minutes in off an assist from Ava Quintern.

Brown scored the game winner with five minutes left in regulation off an assist from T’Mia Kitchings.

Ava Gray opened the scoring on a direct kick with 1:30 left in the half and then added a second goal eight minutes after the intermission as the Lady Bees (3-1) got the GR victory.

With 20 minutes to go in the second half, Makenzie Hagen added some insurance off an assist by Sasha Schramm.

The Lady Irish picked up a big victory over a high scoring Lyndonville squad Monday.

Three different players rang the bell for Notre Dame as Autumn Mathisen and Arabella Rogers scored in the first half while Nina Bartz netted the second half goal.

Bartz also added an assist while Cayleigh Havens and Maylee Green dished out a few dimes too.

ND defender Emma Sisson drew the defensive assignment on Lyndonville’s Ella Lewis who entered the game with eight goals and held her scorelss.

After a pair of one goal losses over the weekend, Batavia got back on track Monday with the one goal victory over a tough Olympia team.

The game winner was scored late in regulation — with eight minutes left — when a combination goal off a corner by Mack Harmon and helped by Cambell Riley led the Lady Devils to the win to move to 3-2-1.