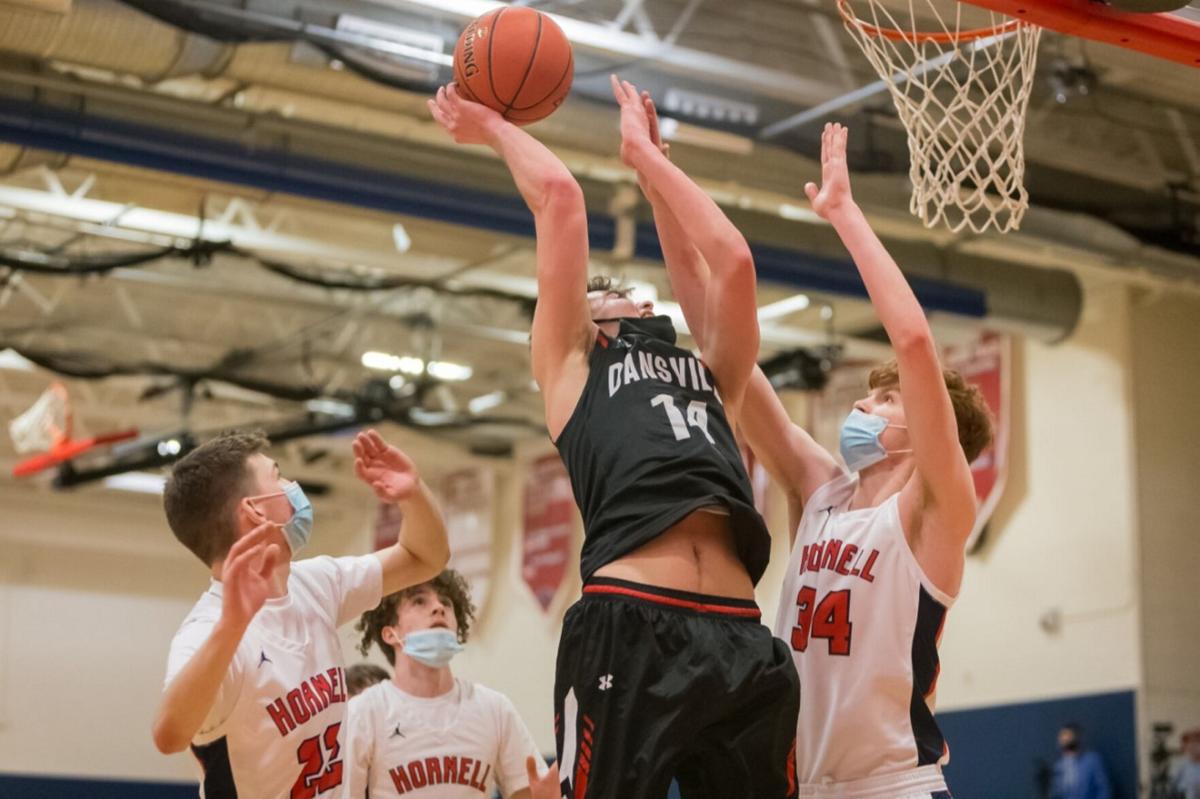 Photos by Steve Harrison Dansville’s Drew Morrow (14) puts up the shot during Monday’s win over Hornell. 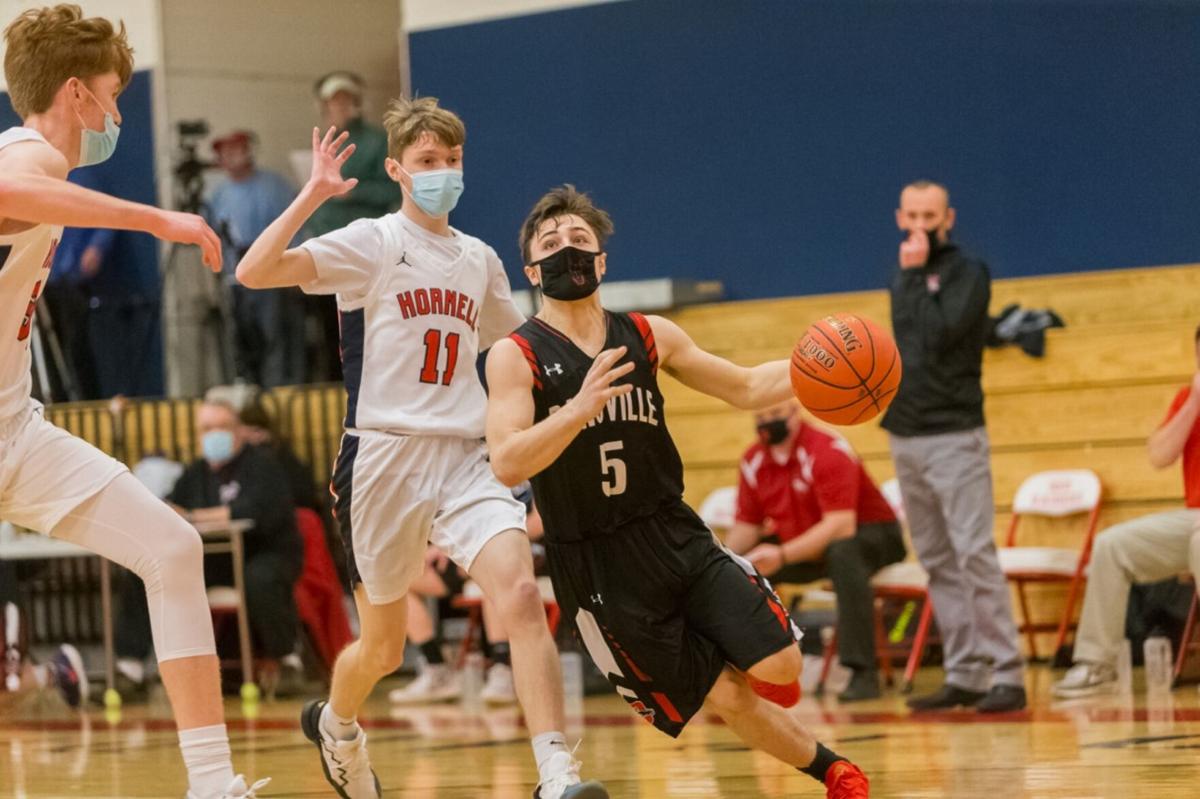 Photos by Steve Harrison Dansville’s Ryan Carnevale (5) goes to the hoop during Monday’s win over Hornell. 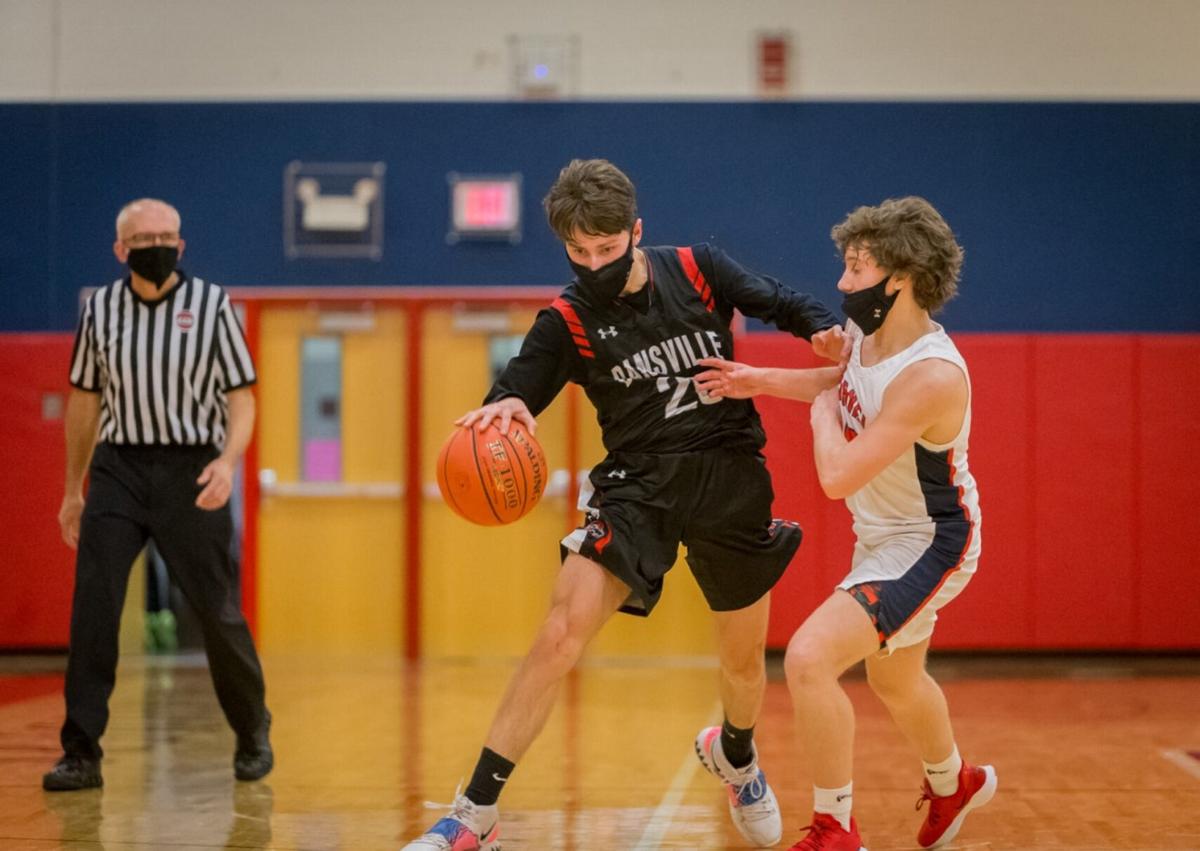 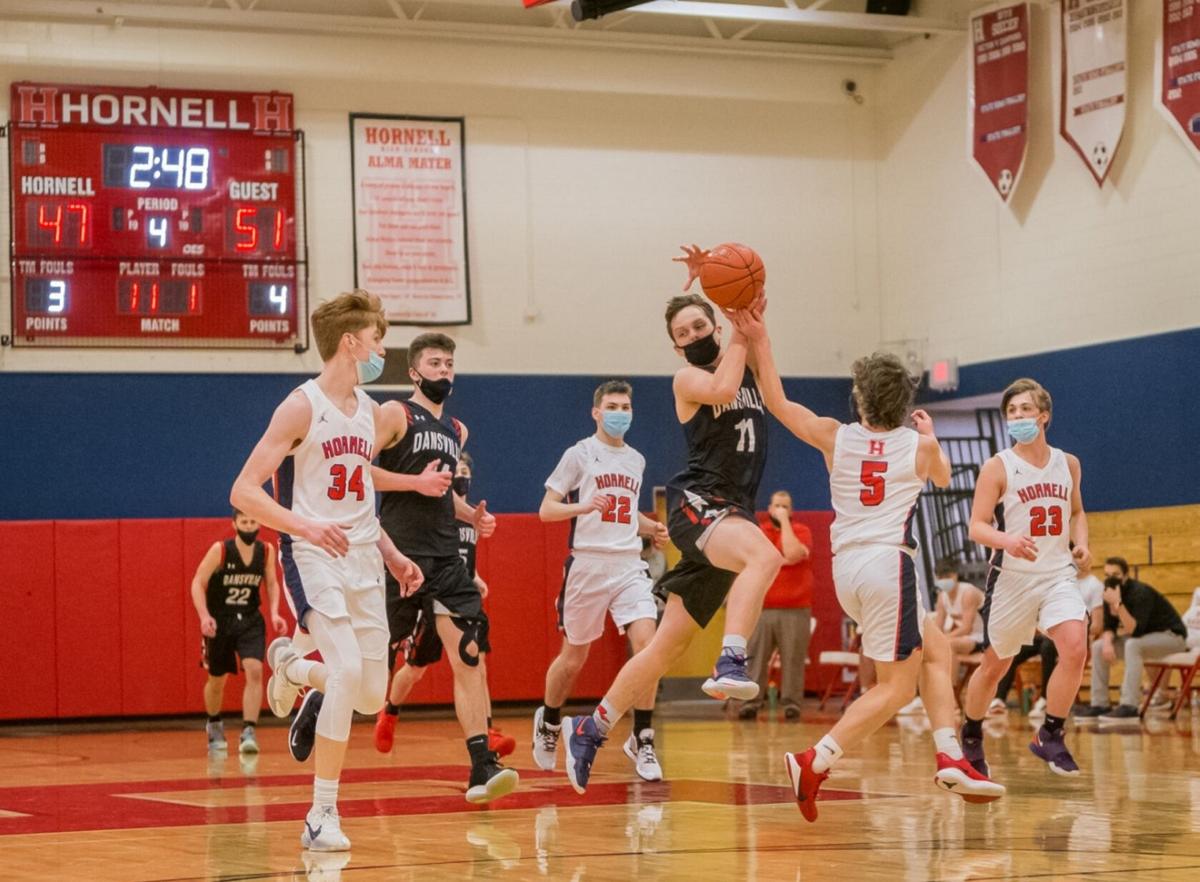 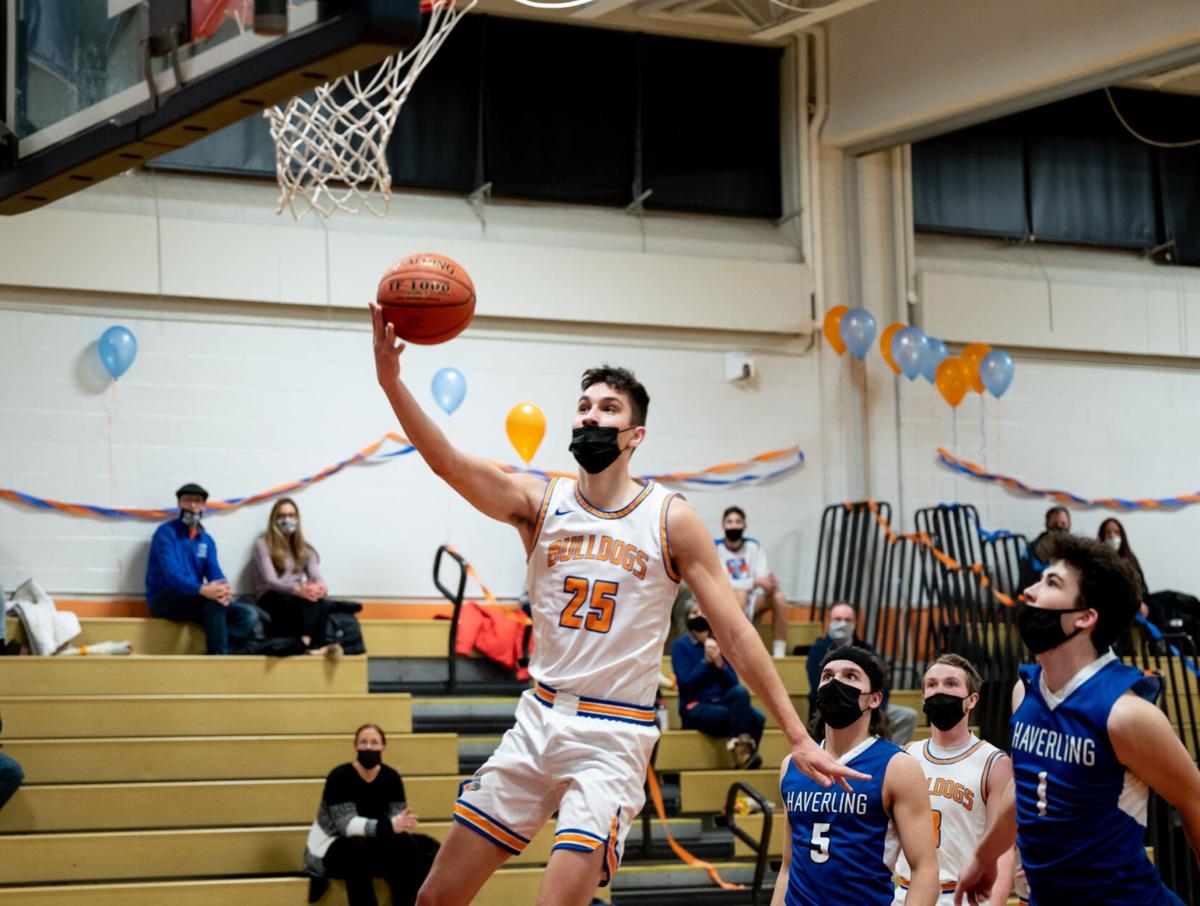 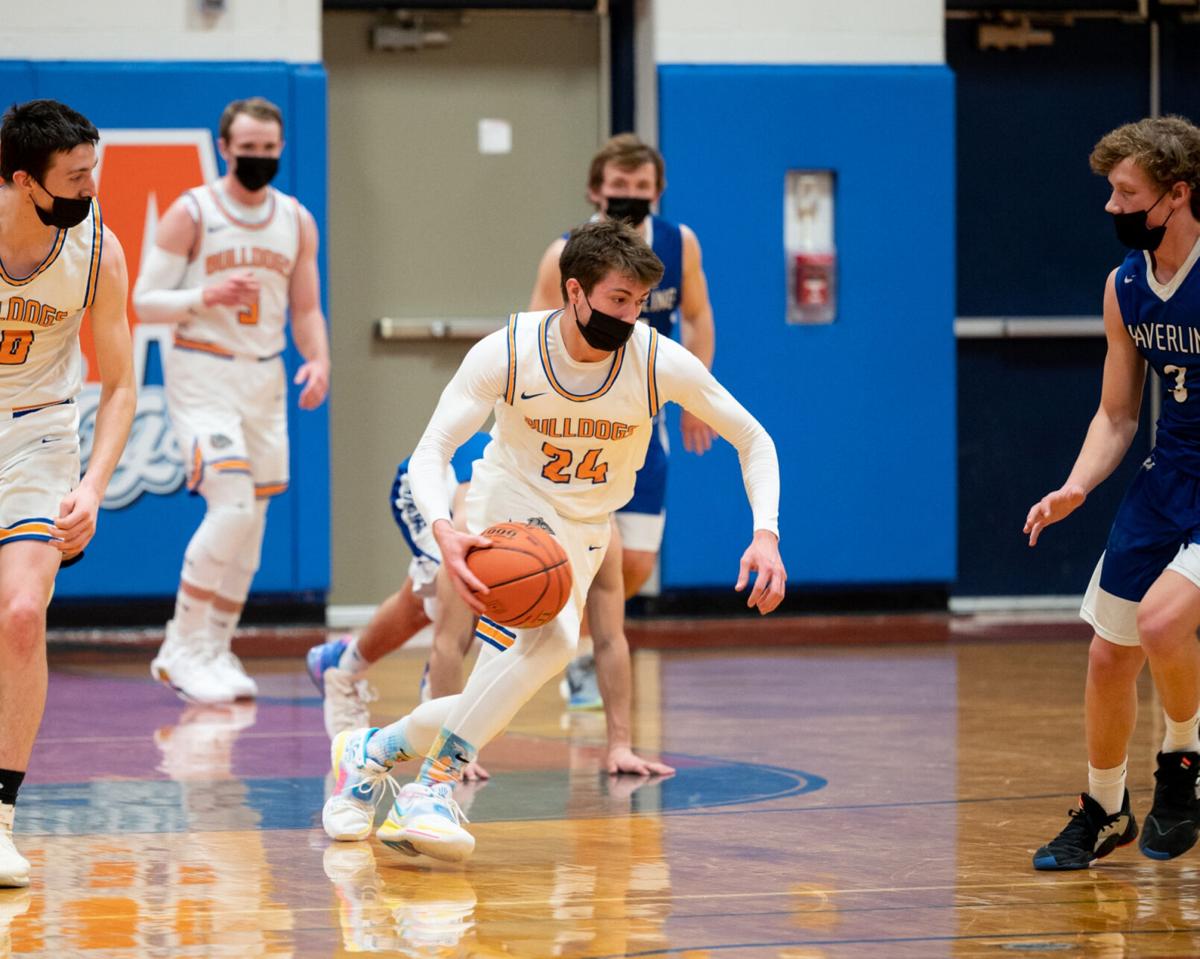 Photos by Steve Harrison Dansville’s Drew Morrow (14) puts up the shot during Monday’s win over Hornell.

Photos by Steve Harrison Dansville’s Ryan Carnevale (5) goes to the hoop during Monday’s win over Hornell.

HORNELL — It has been a while since Dave Moodie and the Dansville Mustangs have took home a dub from the Maple City.

They got one Monday.

Seven players scored at least two baskets for the Mustangs.

Dansville led 14-13 after one and extended their halftime lead to 31-24 at the half.

After Hornell snipped into the lead a bit after three, Dansville closed out the game on a 12-8 run in the fourth to put it away.

Hornell (4-2) was led by Gennaro Picco with 19 points while Eli Dunn finished with 15.

“Congratulations to the seniors of Hornell and their parents on senior night,” coach Moodie said. “My heart goes out to Jackson White. He’s a great player and I wish him a healthy recovery from his injury. I’m extremely proud of my team. The number one thing we’ve been emphasizing the last couple of days is effort. Max effort for four quarters is what they gave tonight and the result was a win. Nothing better for kids than to realize that playing hard can be a recipe for success. I hope they enjoy this and keep that mentality moving forward.”

York senior forward James Kennedy scored 18 points and grabbed a lot of rebounds as visiting York pretty much led from start to finish during their one-point victory over LCAA D-III rival Geneseo Monday.

The game tipped off over 30 minutes late because one official went to the wrong location.

But once the ball was thrown up, it was a typical Geneseo/York high intense game.

“We always know it’s going to be a battle when we play Geneseo,” Kennedy said. “And tonight we came together as a team and pulled out a hard fought victory.”

Instead of trying to force up a three, Geneseo’s Nick Lamb would score the deuce on a short jumper to cut the lead to one.

With five seconds on the game clock, York threw a long inbounds pass that was ruled a travel giving Geneseo back the ball with two seconds left.

A desperation heave would miss giving York the victory.

Kennedy led the way with 18 points while Maddox Timothy and David Cuozzo both played well contributing 12 points each while Tyler Brady added nine.

“I feel extremely proud of our fight and grit tonight,” York coach Eddie Orman Jr. said. “It wasn’t the prettiest of games for either team, but that’s often the case between York and Geneseo. Both teams competed extremely hard and I’m proud of our guys for making just enough plays to pull off the victory.”

Like Orman, Geneseo coach Charlie Passarell was proud of his kids as well.

“I thought our guys battled all night tonight,” coach Passarell said. “I will never question this groups’ effort. Each time we made a little run to get back into it, York found a way to answer with a different guy. Hats off to all those players and Coach Orman on a great game.”

Evan Raniewicz scored a career-high 25 points, including 19 in the second half, as Cal-Mum shook off some game rust and eventually came away with their sixth victory of the season against no losses as they defeated a gritty Pavilion squad Monday.

Raniewicz, a junior, also added six rebounds, three assists and two steals. He was also a perfect 8-of-8 from the FT stripe.

Cal-Mum trailed 25-24 at the half before outscoring Pavilion 32-20 in the second half including a 22-11 fourth period run.

Kyle Wade finished with 12 points and six assists while Mark Poles-Harrison had a near double-double with 10 points and nine rebounds. He also blocked three shots for Cal-Mum, who will host York Wednesday.

For Pavilion (2-3), Cole Tillotson led the way with 23 points to go along with five rebounds and three assists.

Trevor Wiedrich added a solid game with 13 points to go with 11 rebounds and six blocked shots.

“Ethan Tillotson, Dylan Dziekan and Zack Tillotson played great perimeter defense for us,” coach Jeffres said. “Raniewicz was really the difference In the game and hit big shot after big shot. But we should he proud of the way we battled and now we need to move forward and continue to find ways to improve as Keshequa comes to town Wednesday looking for redemption.”

The Blue Devils picked up their first win of the season as junior guard Stephen Somers had a monster game with a career-high 37 points to go with 15 rebounds and eight assists.

Keshequa took the early lead as the Indians hit six 3-pointers in the first half.

Mount Morris trailed 67-64 after three before finishing the game on a 22-11 run.

“Halfway through the third quarter we started making stops and turning it into transition offense,” M-M coach Brian Stout said. “Somers had 16 of his career high 37 points in the third, and our four freshman (Santini, Yencer, Young, Constantino) came up huge with 16 combined points in the fourth quarter including five of six from the free throw line down the stretch.”

It was raining three’s for Wayland-Cohocton again on Monday as the Golden Eagles hit 12 more trifecta’s during their LCAA D-II victory over Warsaw.

Brogan Cotter led Way-Co with 22 points including four 3-pointers while Michael Gammel added 16 points also hitting on four shots from beyond the arc.

“I was really proud of how our guys are sharing the basketball,” Way-Co coach Jake Kenney said. “They don’t care who takes the open shot and are willing to make the extra pass to get the right look.”

The Bulldogs celebrated senior night with their six seniors putting the beat down on Bath Monday.

Livonia led 24-2 in the first period and then extended it to 45-17 at the half. After a 19-6 third period advantage took the lead to 64-20 after three, before head coach Matt Young called off the dogs as both teams battled to a 9-9 fourth.