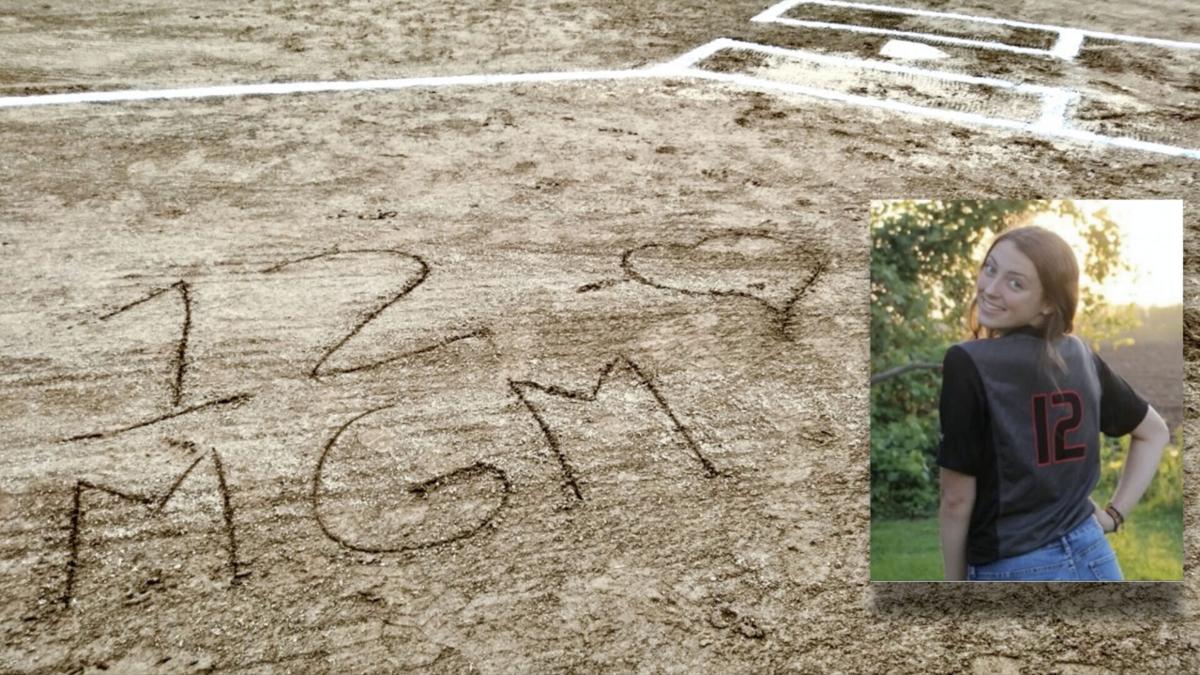 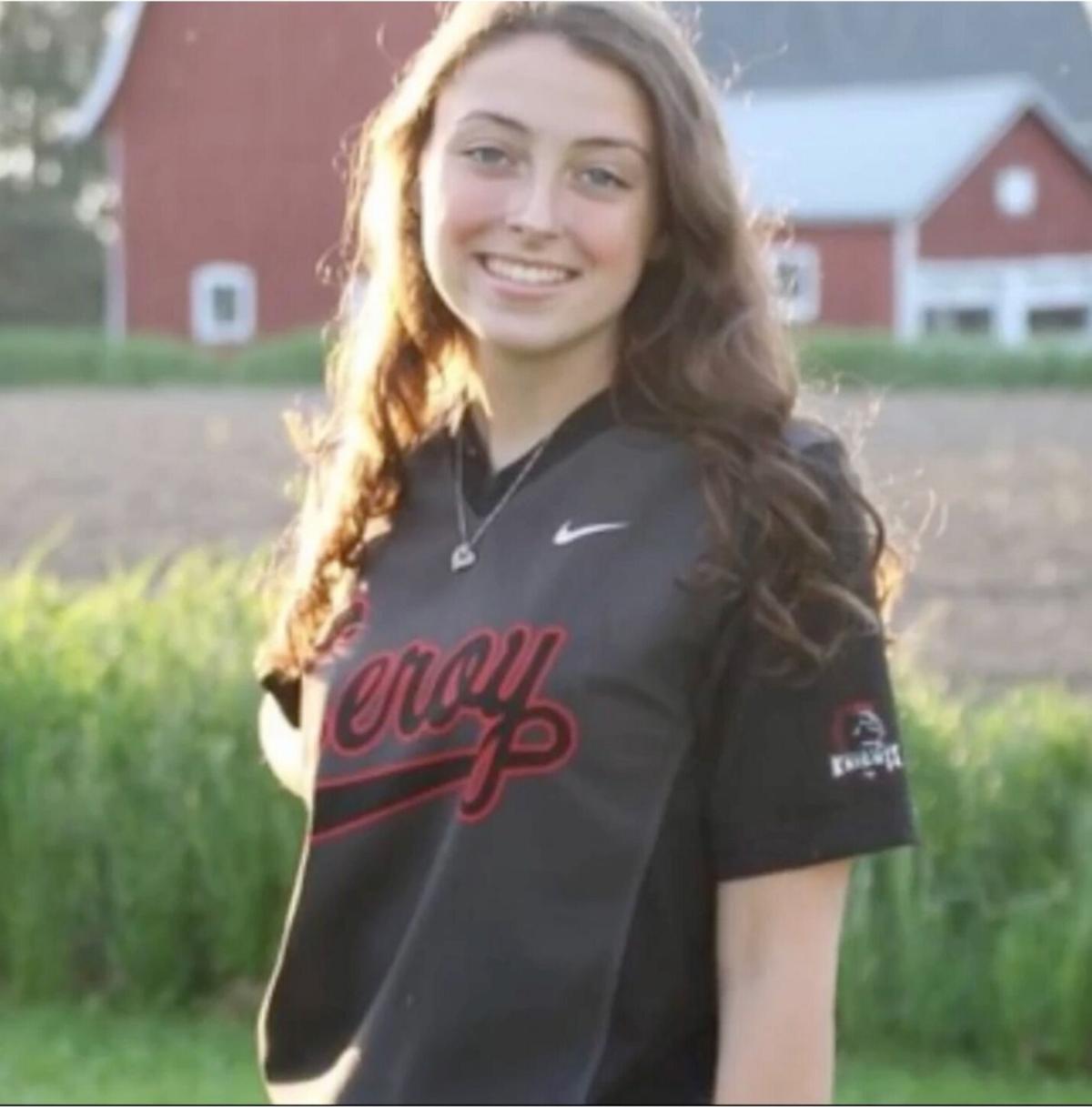 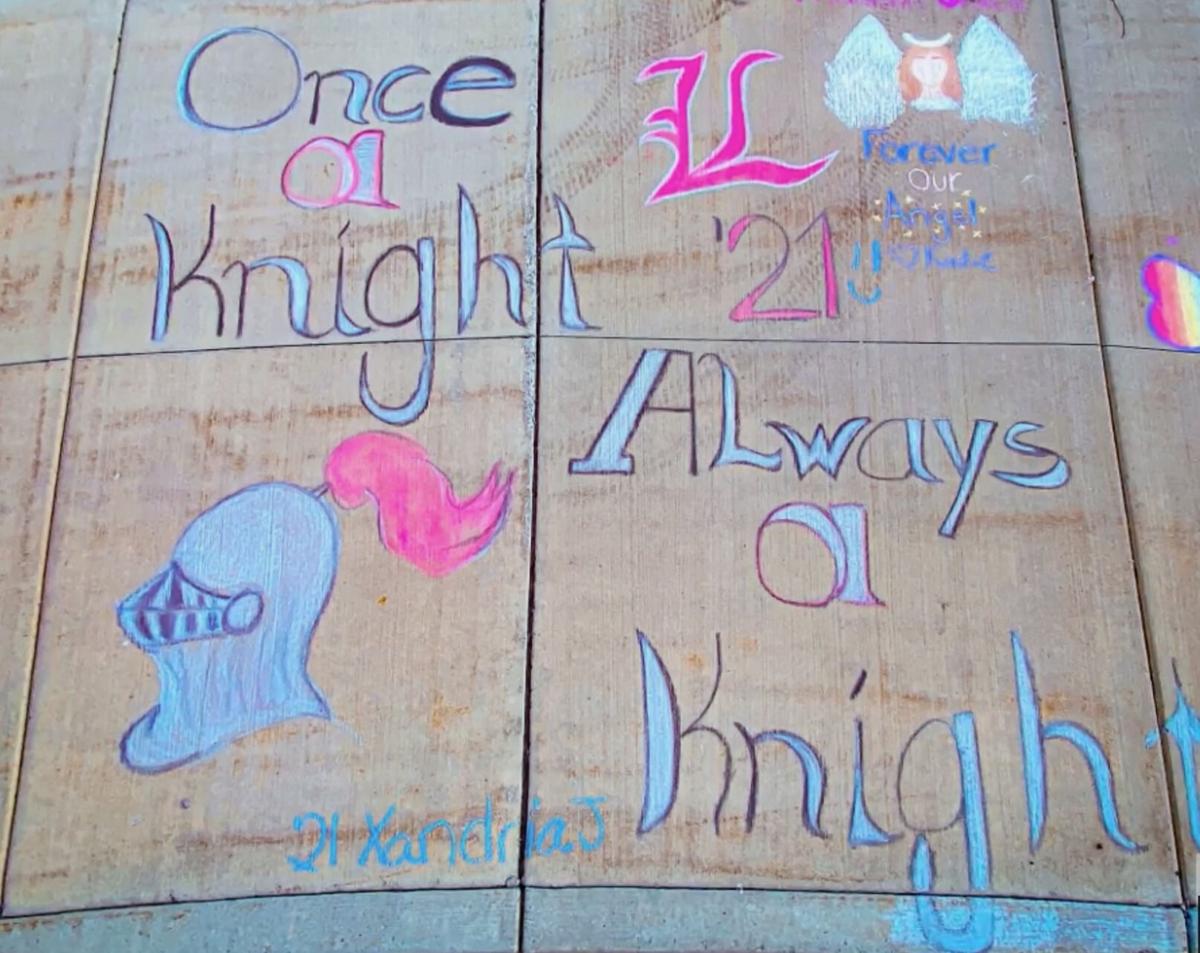 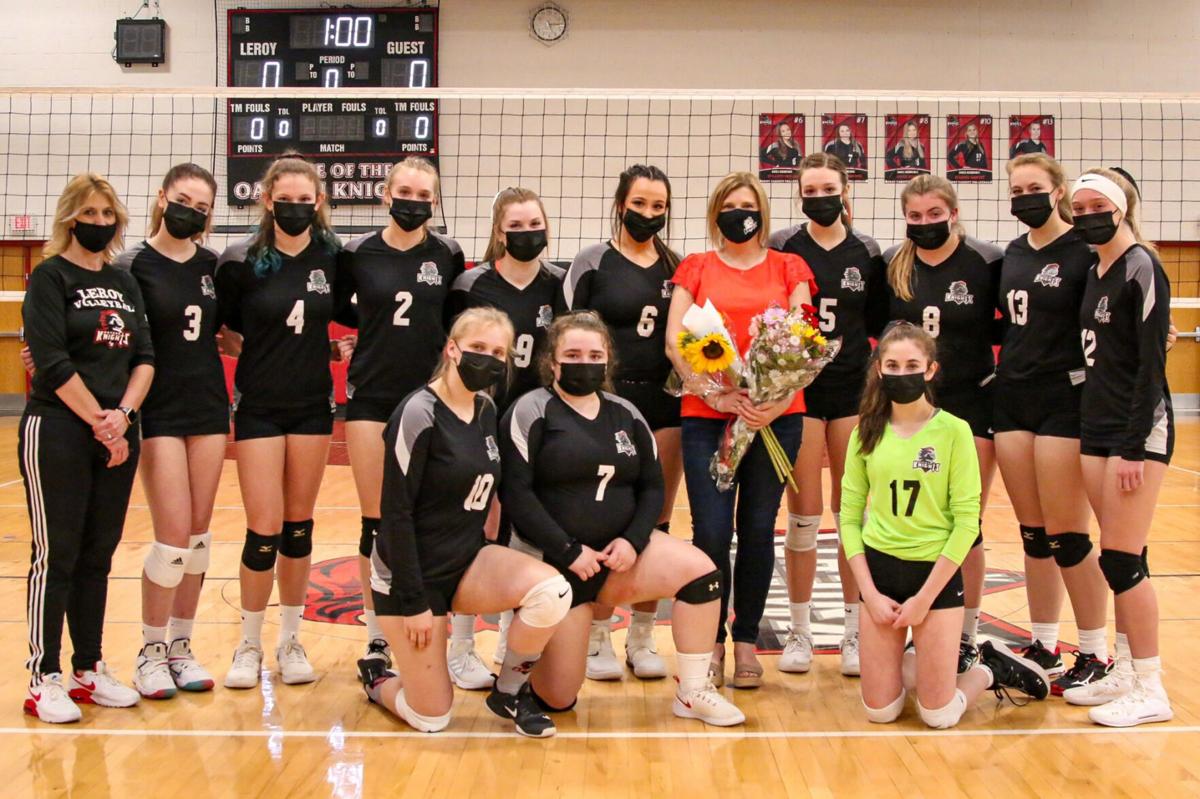 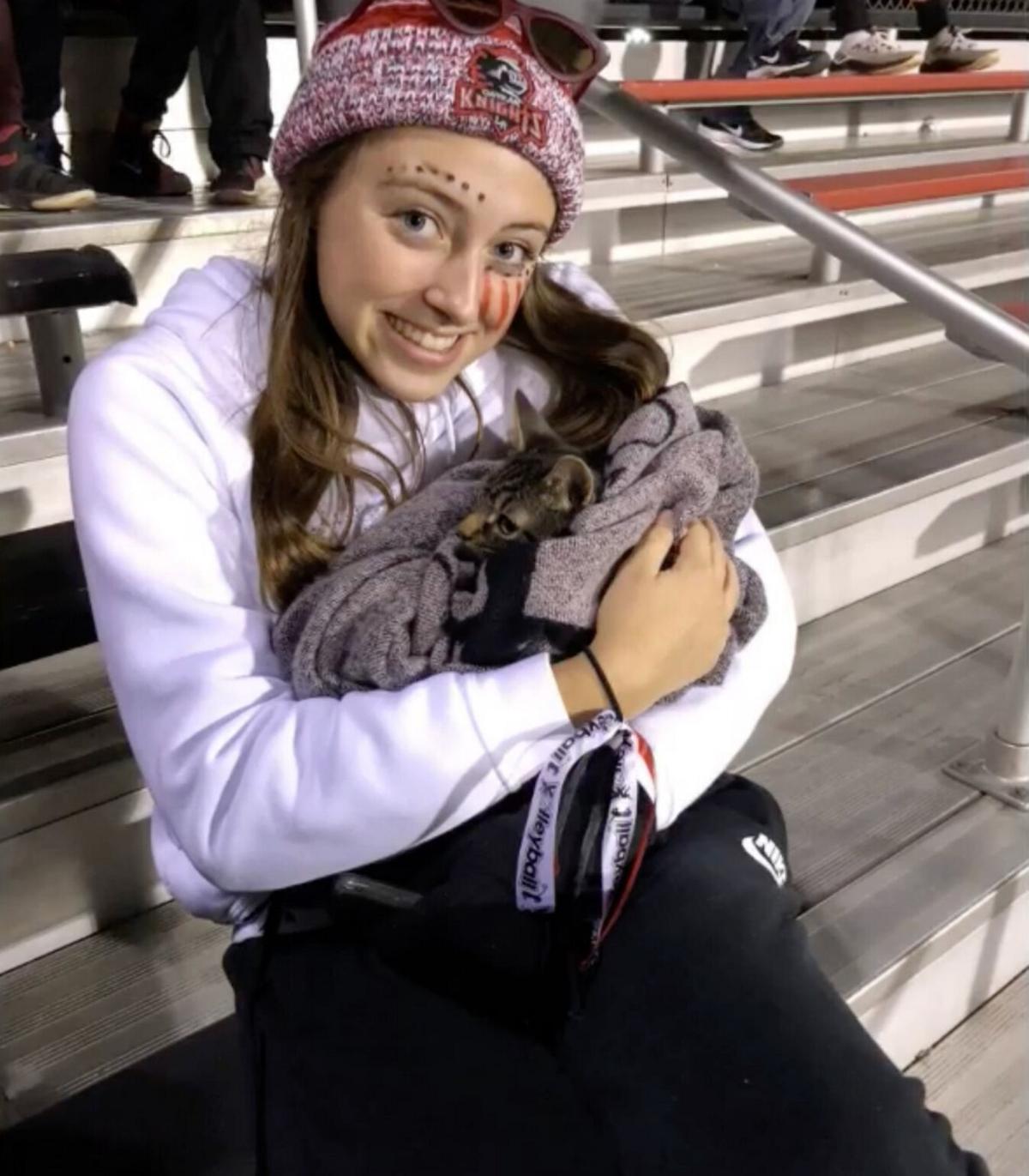 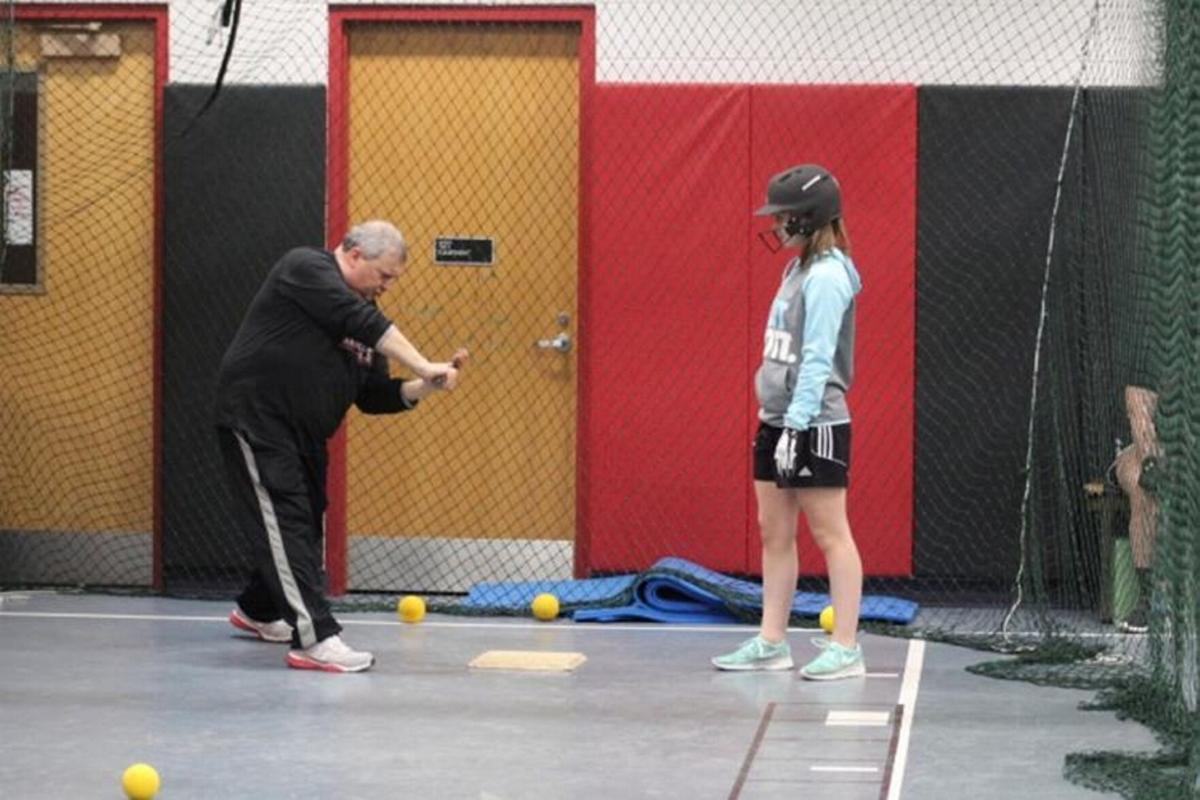 Fast forward two years later, after the COVID-19 pandemic forced the cancelation of the ‘20 season, Battaglia entered the ‘21 campaign still with 98 career victories to his record.

Two games into this spring’s regular season, Battaglia and his Lady Knights’ coaching staff reached the century mark after recording a couple of wins by a combined score of 24-1 over league rivals, the Warsaw Tigers and Geneseo Blue Devils.

The victory over the Tigers was a ho-hum, 8-0 victory over a young, inexperienced squad that ‘Coach Bags’ and his team likely expected to cruise past. But in Game 2, although his Knights blew out Geneseo by a lopsided final, Battaglia’s milestone win over the Blue Devils was anything but run of the mill.

In the opposing dugout that day was longtime Geneseo head coach Chris Masters, who lost his daughter, Maddie Masters, unexpectedly in September. Maddie was a vibrant young woman who left an impact on many of those she touched during her 17 years of life and a Le Roy student-athlete who served as a former member of the Knights’ softball team and volleyball team.

Before her passing, Maddie and Battaglia repeatedly spoke about the team’s upcoming match up against her father’s Blue Devils, which they believed would come during the ‘20 season before a global health crisis canceled that campaign. Entering the ‘20-’21 school year, Battaglia says Masters had her sights set on finally opposing and defeating her father’s squad.

“I remember last year how disappointed she was that we lost our season because she was going to be able to play against her dad for the first time,” said the Le Roy head coach. “Then we thought it might happen this year, and unfortunately, it didn’t.”

Although she did not play in the Knights’ match up against her father’s squad, both teams made sure Maddie’s presence was felt that evening at Geneseo High School.

Upon arrival at Geneseo, Battaglia and his team entered the Blue Devils’ home field to find their former teammate’s initials, M.G.M., and her number 12 inscribed in the dirt in front of the Knights’ dugout. For Le Roy, it was just what they needed entering what was sure to be an emotional couple of hours.

“I thought that was a very classy thing to do,” said Battaglia of the Blue Devils’ gesture. “I think we were already emotional coming off the bus, and that certainly got to us. We loved that they did it. It’s another reminder that we’re playing for her.”

Despite Maddie not being with her team physically this spring, she has still managed to find her way into the hearts and minds of her teammates and coaches alike. For her former head coach, Battaglia was proud to share one of the most significant moments of his coaching career with who he viewed as a unique player and person.

“I wasn’t expecting it because when the ‘19 season ended, we were just a couple of wins away. I obviously didn’t think two years down the road that any of this would be happening,” said Battaglia.

Following the game against Geneseo, Chris Masters walked over to the Le Roy dugout and asked Battaglia if he could spend a few moments with the team.

“He talked to them about how important they were to Maddie and how much she loved Le Roy and representing her school,” said Battaglia. “I thought that was awesome for Chris to do that. There were some tough moments that day, but really nice moments for all of us. I think we all needed it too. It was a beneficial thing for all of us.”

It’s moments like the one between Le Roy and Geneseo on the field that day that have helped not only Maddie’s former friends, coaches and teammates through the grieving process but her family as well.

“It’s definitely helped a lot,” said Chris Masters. “To know she’s left an impact on everybody, I think about it every day. Just how special she was and how important she was to so many different people. That support, love and help that we get have definitely been really helpful through it all.”

Masters, a multi-sport coach and teacher at Geneseo HS for many years, is aware of the impact that the loss of a friend, classmate and teammate can have on a school community. He’s found inspiration in how the Geneseo and Le Roy communities have rallied together to help his family during such a challenging time.

“I just think that being able to stick together with my teams, have my players obviously supporting me through all of this while I’m trying to coach them was definitely needed,” said Masters. “And the Le Roy athletes, doing everything they did in the fall to honor her memory.”

During the fall season, the Le Roy volleyball team wore decorative bows with Maddie’s number 12 and honored her during ‘Senior Night.’ This spring, the Knights’ softball squad has donned their batting helmets with commemorative stickers with Maddie’s initials and number.

The Le Roy Town Board also arranged a ‘Grace Day’ a few weeks ago in honor of Maddie, whose middle name was Grace.

Le Roy senior Abbie Woodworth took it upon herself to chip in honor of her fallen teammate, raising money to help donate meals and dessert at two GLOW Region eateries.

“Abbie spearheaded this drive around our building to raise money to buy a gift card at (Le Roy) Dunkin’,” said Battaglia. “As people came through that day to pay for their purchases, the drive raised so much money that she ended up getting a card there, and then she drove down to Warsaw to Yummie’s because Yummie’s was Maddie’s favorite ice cream place. She brought the rest of the money there and got a card so that people could have their ice cream paid for that day.”

It’s been all hands on deck for the Le Roy and Geneseo communities to support their fallen teammate and her family.

“I also had former players trying to help out with my hockey team, getting our hockey team helmet stickers,” Masters continued. “It just meant the world to me to know that everybody cared enough to help out and to reach out.”

Battaglia says he holds great admiration for the grace the Masters family has shown throughout this trying time. Shortly after that tragic day, Maddie’s mother, Kate Cross, started a fund in Maddie’s name to aid Le Roy youth sports. The money raised will help provide financial assistance to those unable to afford equipment or registration fees.

“It’s only something you can imagine - it’s every parent’s worst nightmare,” said Battaglia, a father himself. “I’ve had long discussions with Chris and Kate. The way they’ve handled this has been incredible. I think back to Chris’ eulogy at her funeral, and on ‘Senior Night’ for volleyball, Kate represented Maddie.”

The remembrance of their daughter didn’t stop there.

“I went out to coach third base the other day, and Kate was sitting in the bleachers,” said Battaglia. “It’s just awesome that she’s there and wants to represent Maddie. I can only imagine just how difficult all these things are that they’re doing. But I know how important Maddie was to them.”

The impact Maddie left on those she touched is a common thread when you talk to those with whom she was closest.

“Maddie was just one of the most genuine people I’ve ever met,” said Le Roy senior Ellie Dambra. “She was just always someone that you could lean on no matter what problem you were having. That was definitely the case through sports. Even if she wasn’t on the same team as you, she was someone you could go to to talk to about anything.”

“Maddie didn’t have a long life, but the life she lived was impactful on so many people,” said the Knights’ head coach.

Perhaps Maddie’s most significant impact has been how her passing has led those around her to cherish every moment. For his team, Battaglia says that whenever there are moments of angst between his team, the girls are quick to remind themselves that they should be enjoying each other and their time together.

“I think for all of us, it’s helped us recognize, along with the pandemic, how special these moments are,” said Battaglia. “We’re not always going to have them, and they can be taken away from us quickly when we’re not expecting it. Because we’ve seen that it can be pulled away pretty quickly.”

As the Knights move forward through their journey toward what they hope to be a sectional championship season, they know what and who they’ll be playing for this year.

Losing a daughter, sister, friend, classmate, teammate, it’s something that never comes easy. But the Geneseo and Le Roy communities, inspired by the strength of the Masters family, have rallied together to ensure Maddie’s memory is long-lasting.

As small of a gesture as inscribing her initials and number into the dirt, everything matters when it comes to remembering a young woman who made an impact on everyone with which she came into contact.

“It’s about honoring her life,” said Le Roy junior Hailey Johnson. “I think that’s the most important thing to all of us right now.”