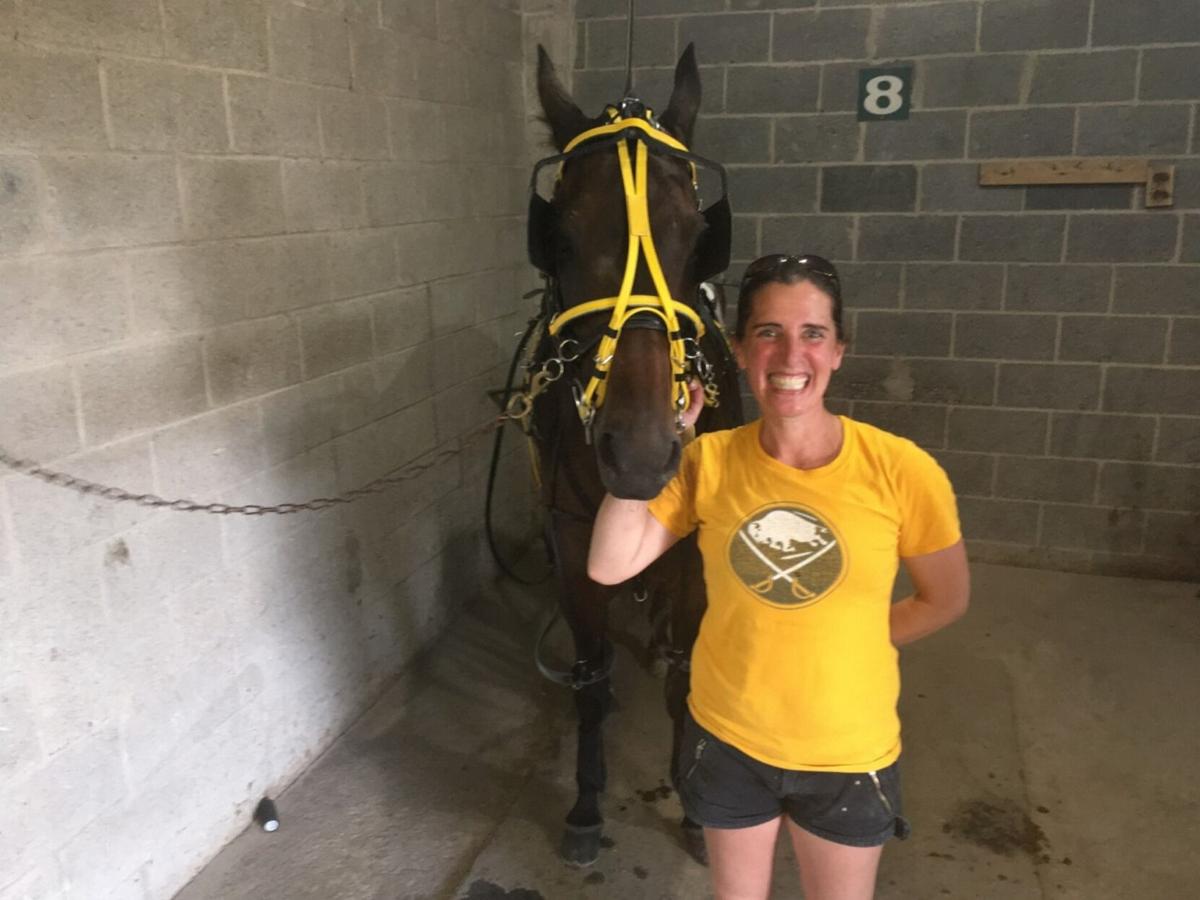 Chris Metcalf/Daily NewsTrainer Maria Rice, of Rice Racing Stable, in the stalls before Little Joke takes to Batavia Downs on July 29. Since 2004, Rice and her husband Jack have earned more than 4.4 million dollars in winnings. 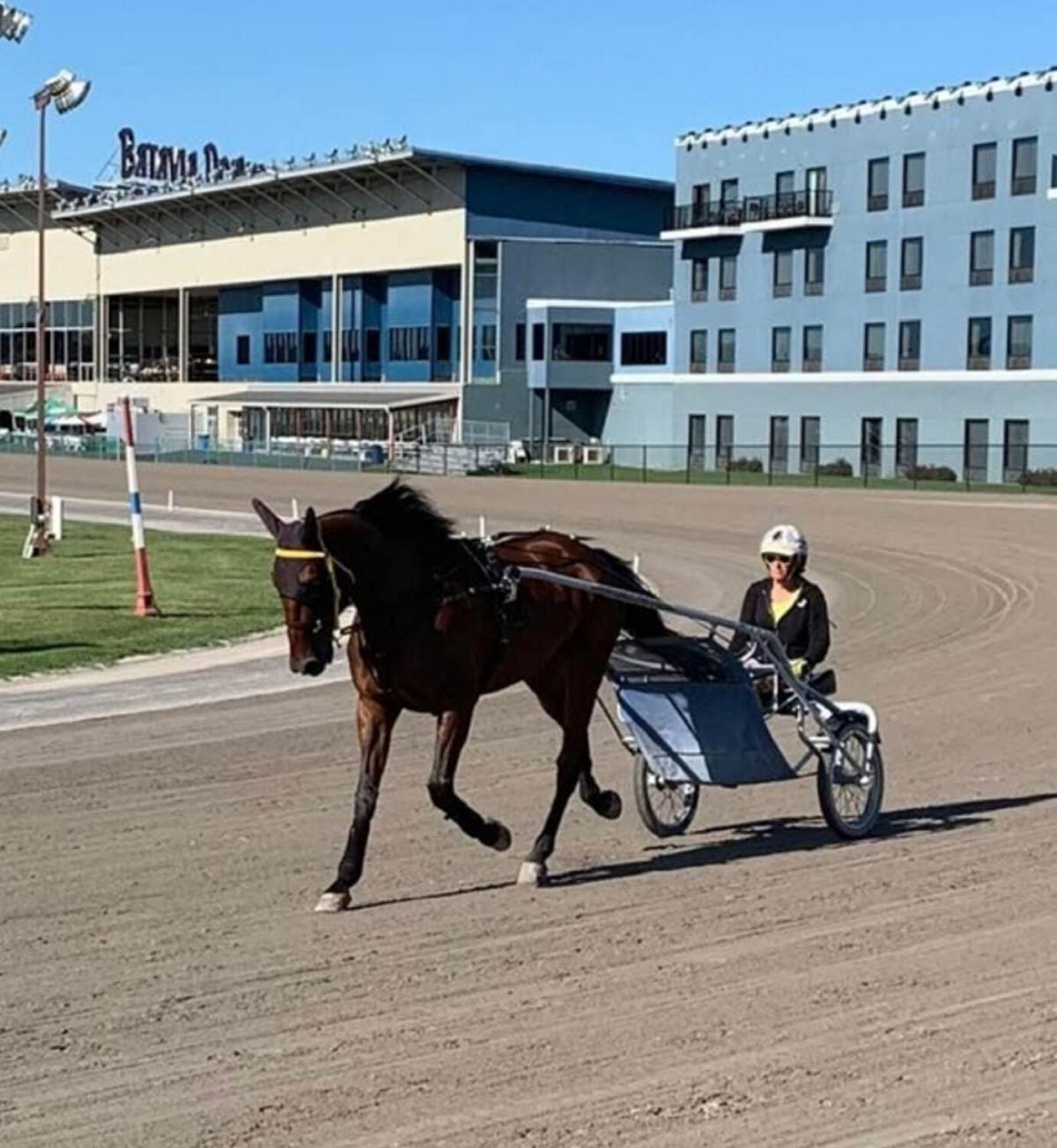 ProvidedMaria Rice out driving one of her horses during a recent training session at Batavia Downs.

Chris Metcalf/Daily NewsTrainer Maria Rice, of Rice Racing Stable, in the stalls before Little Joke takes to Batavia Downs on July 29. Since 2004, Rice and her husband Jack have earned more than 4.4 million dollars in winnings.

ProvidedMaria Rice out driving one of her horses during a recent training session at Batavia Downs.

Rice, one of Western NY’s top horse trainers, has been on a hot streak the past several years with her Rice Racing Stable, which she owns with her husband Jack, a former driver/trainer.

Rice grew up with horses and hasn’t stopped caring for them ever since.

“I’ve loved horses ever since I was a child and worked with show horses,” Maria said. “While I was in college, my mother married a harness horseman and I got introduced to racing. Then a few years later I met my eventual husband Jack who was driving/training also. And we’ve been together ever since.”

And it has been a match made in heaven.

In those three, top-three producing seasons, Rice has combined for 121 victories, 118 runner-up finishes and 72 show tickets.

In those 599 starts, Rice’s horses hit the board 311 times or nearly 52 percent of the time, miraculous numbers to say the least.

Those three seasons her Rice Racing Stable has earned over $912,000 in winnings.

Her overall numbers are just as impressive.

Since starting in 2004, Rice has watched her horses win over 700 races, finishing second 676 times and placing third another 555 times.

Incredibly, heading into last Wednesday’s event at Batavia Downs, Rice has hit the money over 2,000 times and has winnings totaling more than 4.4 million dollars.

She insists that she is fueled “by the change and thrill of working with an animal and getting it to its highest potential.”

In her Rice Racing Stables currently, she has 19 horses and her barn owns a percentage in 17 of those.

Maria credits her stable’s success to the great relationship she has with Jack.

“We work great as a team, and to this day we have yet to have an argument or fight in nearly 20 years,” Maria said. “We consider every thought and detail and it’s 50/50 on our decisions. I feel fortunate to have a life partner to be able to work together on a daily basis.”

And that has been a winning combination.

But being a trainer and horse owner in Western NY certainly has its challenges, especially with the recent hit of Covid-19.

“The pandemic has been very difficult for everyone — both mentally and financially,” Maria said. “But thanks to our owners and partners, we were fortunate to keep all our team members active and also keep all of our horses in top shape. Just waiting for word that racing was going to eventually resume was a formula that worked out very successfully to our advantage.”

Rice’s horses race at both Buffalo Raceway, which goes from late January through mid July, and Batavia Downs, which race usually from late July though mid December.

Race day at the Rice Racing Stable can be a very busy one and it all starts by getting at the barn at 6 a.m.

With the stalls currently at Batavia Downs, Rice has to leave from her Hamburg home around 5:15 a.m. to meet her staff there.

Once she gets there, the day begins. And a long day it is.

“All race horses that are racing that evening we get their stalls mucked out and freshly bedded with pine shavings and an unlimited amount of hay and fresh water so the horses can comfortably relax until race time,” Maria said. “Then we exercise all of the other horses in our stable. Around noon all horses get lunch. Then we gather racing equipment for the night performance. Then Jack and I go to lunch ourselves. About 3 p.m. we come back to the stable and start preparing for the evening’s races.”

An off day is also busy, and starts just as early.

“Our non race day routine also starts at 6 a.m. and we exercise all the horses,” Maria said. “Normally we are done at the barn by around 1 p.m. That’s when Jack and I go to lunch and sometimes we might go and play nine holes at a local golf course or we just go home and relax and research for a future purchase race horse.”

It has already been a great start to the harness season for the Rice family and plenty of outstanding finishes from their talented barn including China Dream, Noble Legend, Protect Bluechip, and Little Joke, amongst others.

And Rice says she and Jack keep a watchful eye for potential new horses to purchase and bring to their stable.

“We try to keep at a top consistent level and our goals are to keep them racing on a weekly basis throughout the year,” Maria said. “Although we have a very nice stable for Western New York we are always looking for new prospects to stay relevant in the upcoming years.”

“Maria has campaigned a powerful stable in Western New York since arriving here and her hard work is constantly on display by how well her horses perform,” Haight says.

Interestingly, Rice only has one driver she looks to — and that’s Davis, who is well on his way to becoming the same legendary driver his dad once was.

Davis is actually Canadian — and still lives in Canada, and comes over each race day with a special visa that allows him to enter the USA.

Davis will always drive Rice-trained horses and when they don’t have one entered his services are highly requested so he will jump on another ride or two.

“There’s nobody we want driving these horses other than Billy,” Maria said. “Billy is really good. I like when a driver can drive our horses every week because they get to know them. They know each horse and whether they are better on or off the pace. Billy has been really good with us.”

Track announcer Joe Zambito is very familiar with the Rice Racing Stable and points directly to Maria’s fun-loving attitude as one of the many keys to her success.

“Maria is a very hard working trainer who cares deeply for her ‘children’ — that’s what she calls them,” Zambito says. “She is very nice to deal with in the race office and seems to always be smiling.”

During the 2020 season, and remember the races were shut down during much of March. Rice Racing Stable has placed first in 42 different races and has cashed money over 94 times.

And Maria Rice wouldn’t have it any other way.

“I love coming to work every day and working with our family here at Rice Racing,” she said. “We all get along so well and we are like one big happy family.”