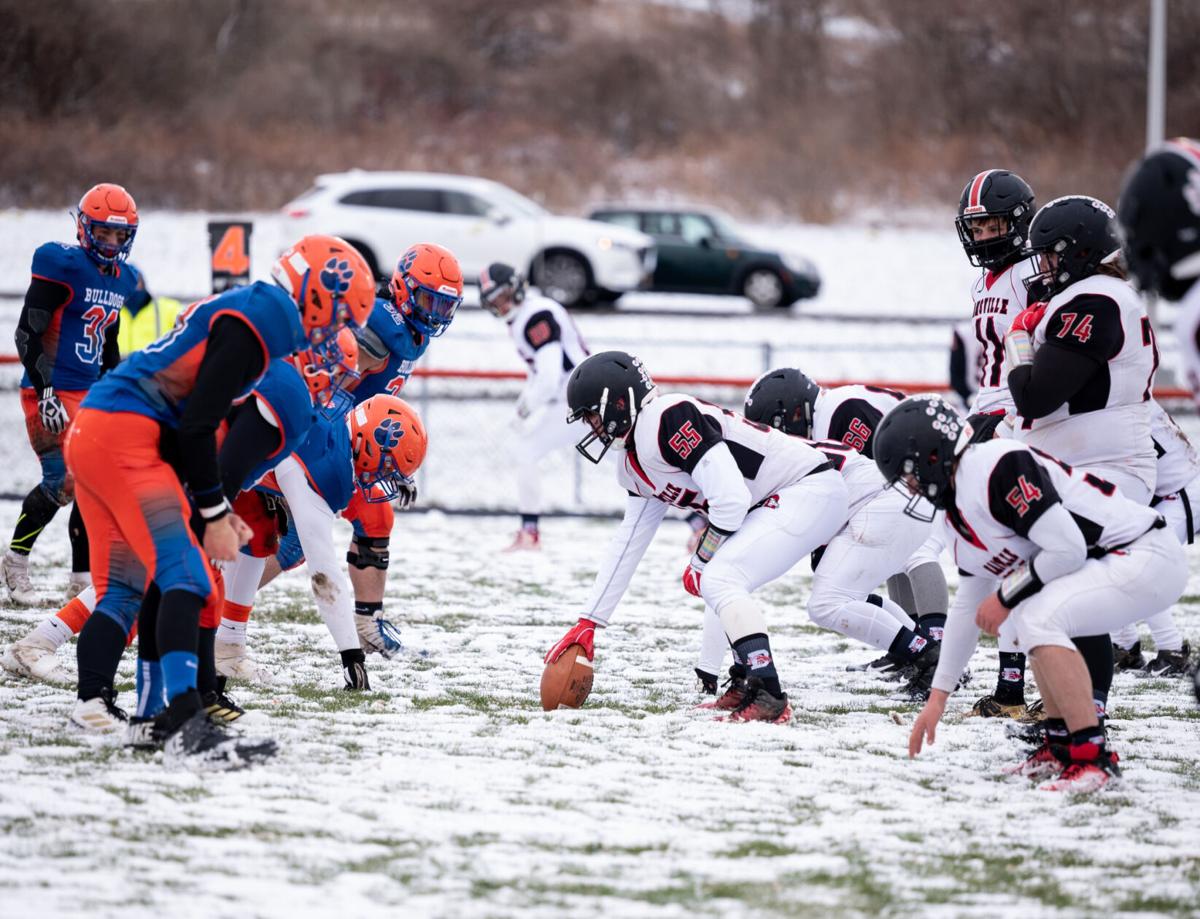 Lindsey Meys/For The Daily News | Livonia worked its way to a blowout win over Dansville on Thursday night. 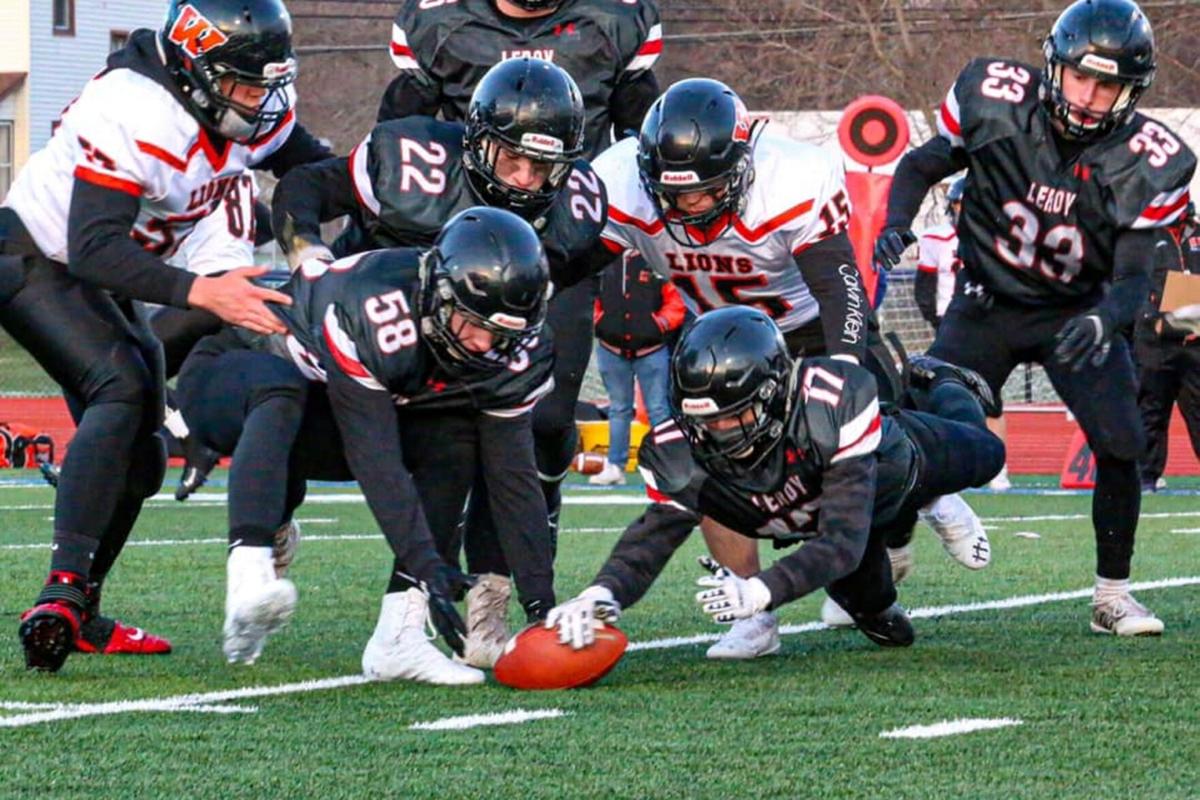 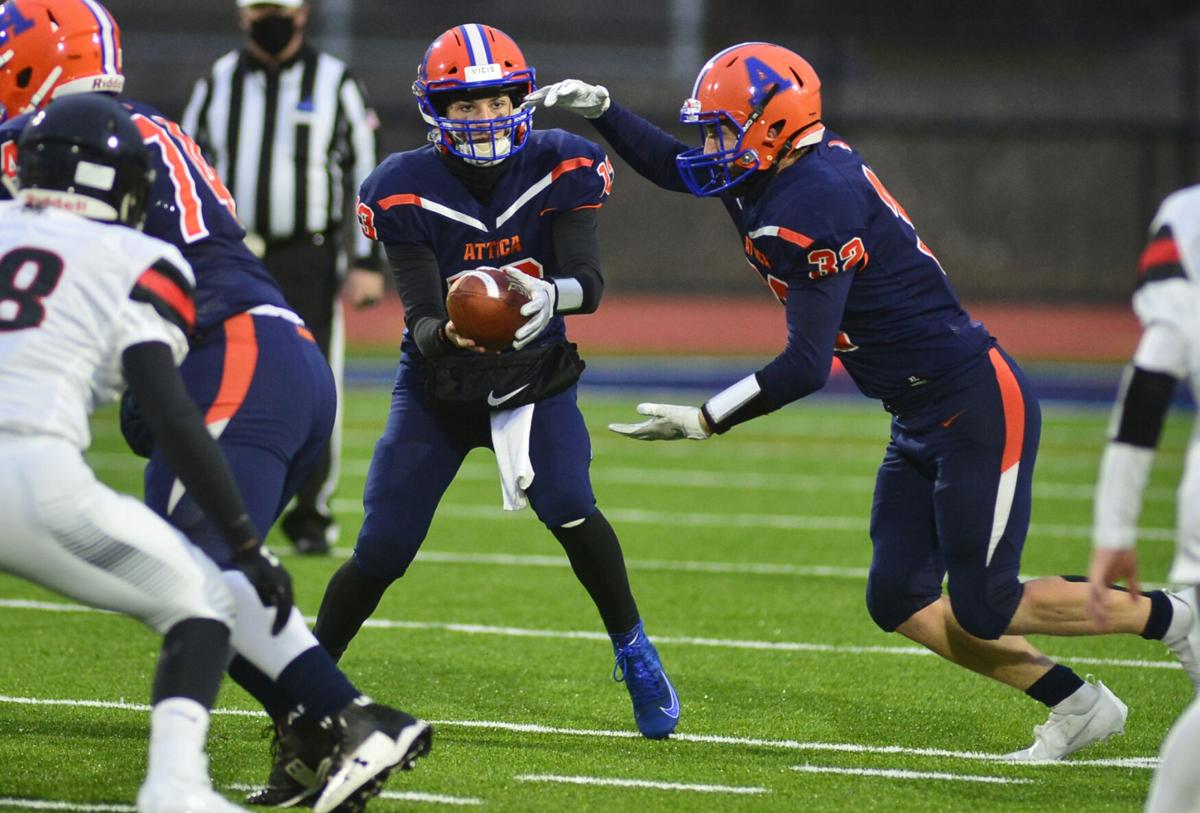 Lindsey Meys/For The Daily News | Livonia worked its way to a blowout win over Dansville on Thursday night.

Each week the high school football schedule is starting earlier and earlier and this week it begins on Wednesday and The Daily News will be bringing you the best game of the night live on its YouTube Channel.

In a huge battle in Class C, undefeated Livonia will be traveling to Attica to take on a Blue Devils team that needed overtime last week to beat Letchworth/Warsaw to improve to 2-1.

With Livonia being one of four teams in Class C still undefeated — Le Roy, Bath-Haverling and Waterloo are the others — Attica knows that a win over the Bulldogs will go a long way to making the postseason. Currently the only 2-1 team in Class C, the Blue Devils close out the regular season with games against Hornell and Dansville (both 1-2) and a win over Livonia could put them in the driver’s seat for a playoff spot.

For Livonia, the Bulldogs will try not to look ahead to what could be a matchup of unbeatens in Week 6 against Le Roy. The Bulldogs are undefeated but have yet to be dominating.

Also on Wednesday night, Le Roy will be at East Rochester/Gananda, while Letchworth/Warsaw will look for its first win of the season against Wellsville.

The Blue Devils bounced back in a big way last week. After being blanked by Le Roy, Attica desperately needed a win to stay in the playoff picture and it wasn’t easy as it took down Letchworth/Warsaw in overtime.

Against what is an impressive Le Roy defense, Attica struggled mightily as it finished with under a 100 total yards, including just 55 yards on the ground on 33 carries, with just five first downs. However, the Blue Devils got it back in gear a little bit last week.

After being stifled by the Oatkan Knights, running back Zach Strzelec was able to get it going and finished the game with 185 yards on the ground and two scores, including the game-tying score and two-point conversion late in the fourth quarter.

Wyatt Kauffman scored the game-winner in overtime and finished with 83 yards on the ground, while QB Jake Dressel had his best game of the season with 78 yards through the air.

The Attica defense has been strong and has allowed just over 13 points per game and was solid last week again behind Jeremiah Donohue, who led the way with 13 tackles, while senior defensive lineman Lucas Johnson added 12 tackles and Strzelec and Kauffman each recorded 10 tackles.

Knowing that his team will be fighting to get into the postseason with just six regular season games and only the top four advancing, Attica coach Caleb Sabatino kept it in perspective last week.

“Moving forward, we’ve got to control what we can control and continue to take it one play at a time,” he said.

The Bulldogs have been impressive at 3-0, having outscored their opponents by a combined 115-30 but it has taken a comeback win over Penn Yan in Week 1 and pulling away last week against Dansville in a game they led just 8-6 at halftime to do so.

All season Livonia has been led by quarterback Alex Minnehan. Last week Minnehan rushed for 277 yards and three touchdowns on 25 carries and through three weeks he leads all of Class C with 711 yards on the ground to go with seven touchdowns.

For Livonia, while the offense has scuffled at times the defense has been up to the task. Last week Trevor Allen finished with a big-time 19 tackles and a fumble recovery, while senior defensive lineman Shaun Weterrings made 10 stops, including a sack, and senior defensive back Jake Smith picked off a pass.

After this week, Livonia will get a win in Week 5 against Wellsville and could be on its way to setting up what would be a huge matchup with Le Roy in Week 6 with both teams probably undefeated and battling for the No. 1 seed in the Class C tournament.

“They run a very similar offense and we know it’s hard to stop,” Livonia head coach Chris Genthner said last week of Attica. “Their wing backs are talented and their line is solid. We’re going to have our hands full.”

Two-time defending champion LetSaw hasn’t had the season that it has become accustomed to in recent years but it should be able to grab its first win of the season on Wednesday night.

Last week LetSaw had Attica on the ropes only to see a late touchdown and two-point conversion send the game into overtime before the Blue Devils would win it on a Wyatt Kauffman touchdown run. However, LetSaw could just as easily be 3-0.

In the opening week of the season they squandered a late, two-score lead to Hornell, while in Week 2 a few key mistakes cost them in a loss to Dansville. Last week, the LetSaw defense continued to show signs of improvement as despite allowing nearly 300 yards to Attica on the ground, they bent but didn’t break and had the Blue Devils at six points late in the fourth quarter.

As for Wellsville, the Tigers are coming off of a tough 55-0 loss to undefeated Le Roy and it certainly has been a difficult first few weeks to the season.

With that setback, Wellsville has now been outscored 137-18 with its closest game coming in a 33-12 loss to Marcus Whitman/Bloomfield in Week 2.

Things are definitely not slated to get any easier for either team as LetSaw will face aforementioned Le Roy in Week 5, while Wellsville will close the season with Livonia and Hornell.

The Oatkan Knights remained one of just two teams in all of Section V to yet to allow a point this season with a 55-0 victory over Wellsville at Van Detta Stadium last week that could have been much worse.

Le Roy has now outscored its opponents 94-0 through three weeks and finally got its offense rolling last week with 290 yards on the ground on just 24 carries. Nate Andrews had his best game of the season with 134 yards and two scores on 13 carries, while Alex Panepento added 63 yards and a TD on just four runs. Panepento also threw for 55 yards and two scores.

Meanwhile, Le Roy forced a plethora of turnovers and led 28-0 midway through the first quarter and never looked back.

On just 27 total plays against Wellsville, Le Roy had 19 first downs and 345 total yards, while it held the Tigers to just over 100 total yards on the night.

The Le Roy offense hasn’t been a juggernaut but Andrews and Panepento form a solid 1-2 punch out of the backfield with fullback Jack Tonzi, while Panepento has performed exceptionally well in his first year at QB. Panepento has gone 21-of-34 for 280 yards and five scores without an interception.

The Le Roy defense is as balanced as they come with eight players with at least eight total stops on the year in Tonzi, Zach Vanderhoof, Cory Wallace, Panepento, Andrew Kettle, Cody Lytle, Tyler Strollo and Cole Rauscher.

This isn’t the Bombers squad that the Oatkan Knights have been used to seeing over the years but they are coming off of a dominating win and can always put together a good performance at home.

After being outscored 72-20 in losses to Oneida and an undefeated Bath team that has allowed just those six points all season, ER/Gananda battered Marcus Whitman/Bloomfield to the tune of 46-22 last week. Quarterback Dion Mather finally got the Bombers offense in gear as he finished 9-of-18 through the air for 192 yards and four total touchdowns in the way win, including a 71-yard TD throw to one of his weapons on the outside in Manny Sepulveda.

WR Jerry Brongo also had a solid game last week with a pair of touchdown receptions, while running back Chauncey Gilbert is talented as well and he broke out last week with 114 yards on the ground on just nine carries.

Adrian Letta and Sepulveda lead a Bombers defense that has surrendered over 31 points per game but has shown that it can be opportunistic at times and could have Le Roy set up in the perfect situation, looking past them after an impressive start.