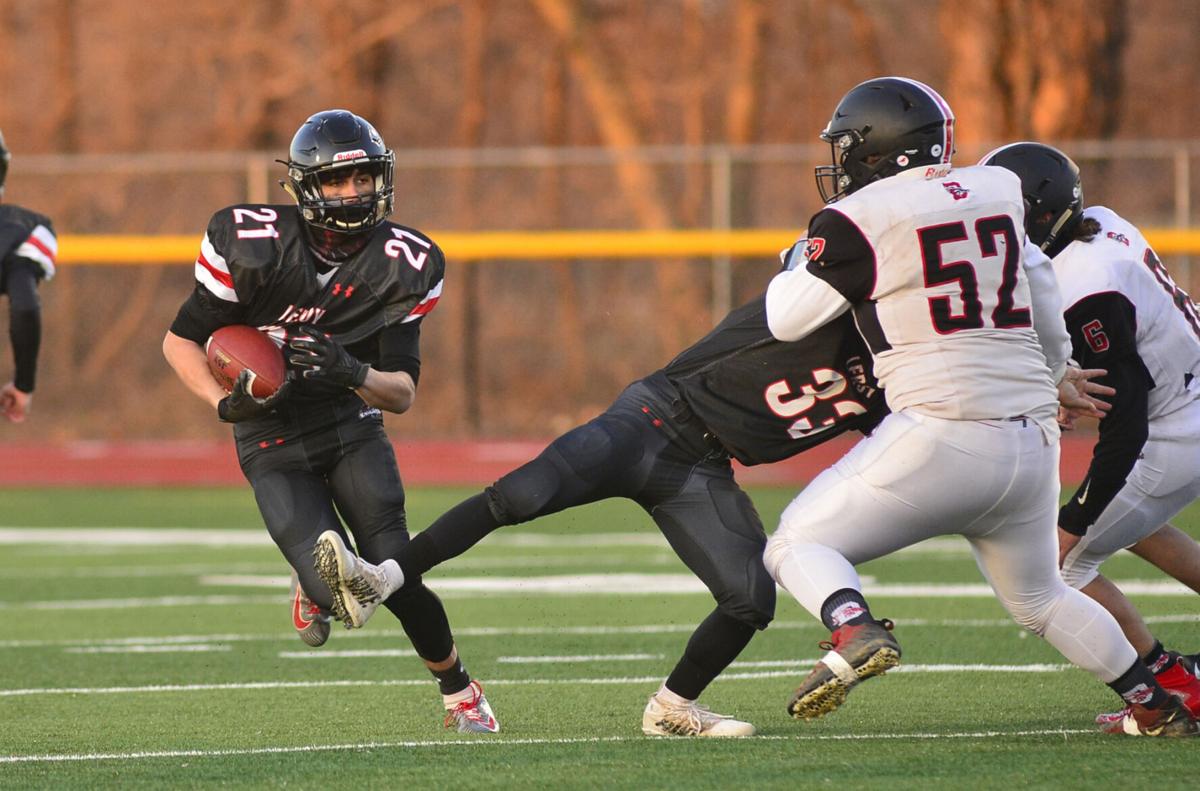 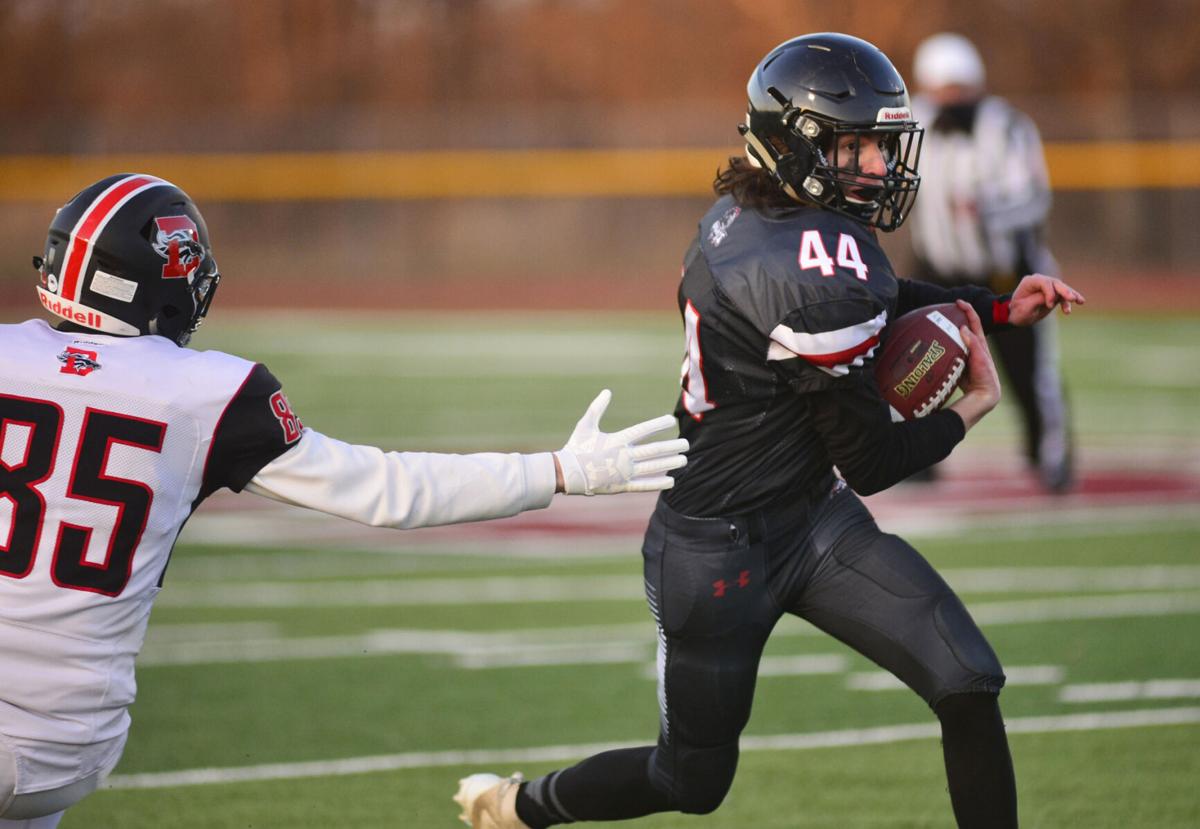 Mark Gutman/Daily News Adam Risewick evades a Dansville defender in the 1st half. 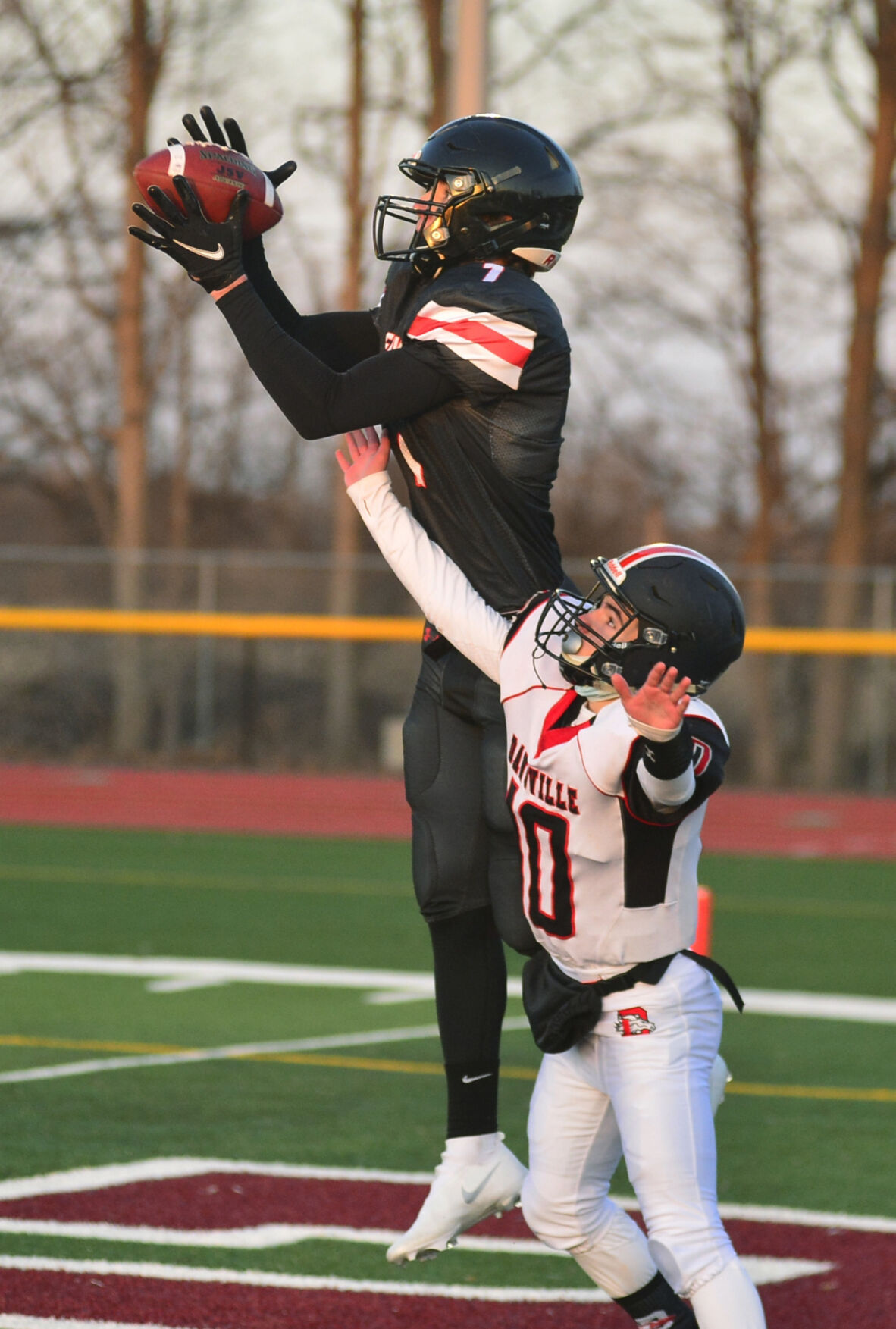 Mark Gutman/Daily News First TD of the season for LeRoy, as Cody Lytle makes a leaping catch as he is defended by Dansville's Calab Rigdon. 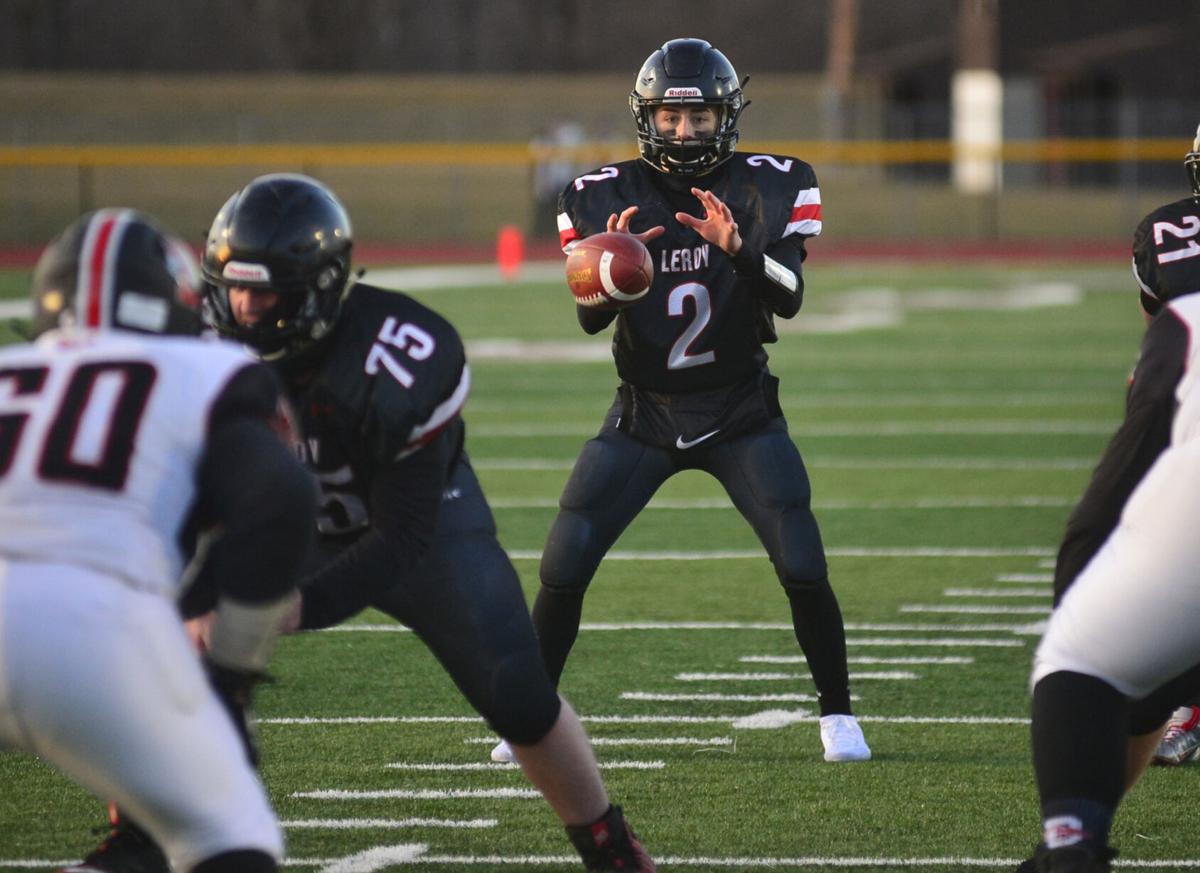 Mark Gutman/Daily News LeRoy QB Alex Panepento was awarded the Casella Waste Player of the Game. The game is available for replay on the Batavia Daily News YouTube Channel. 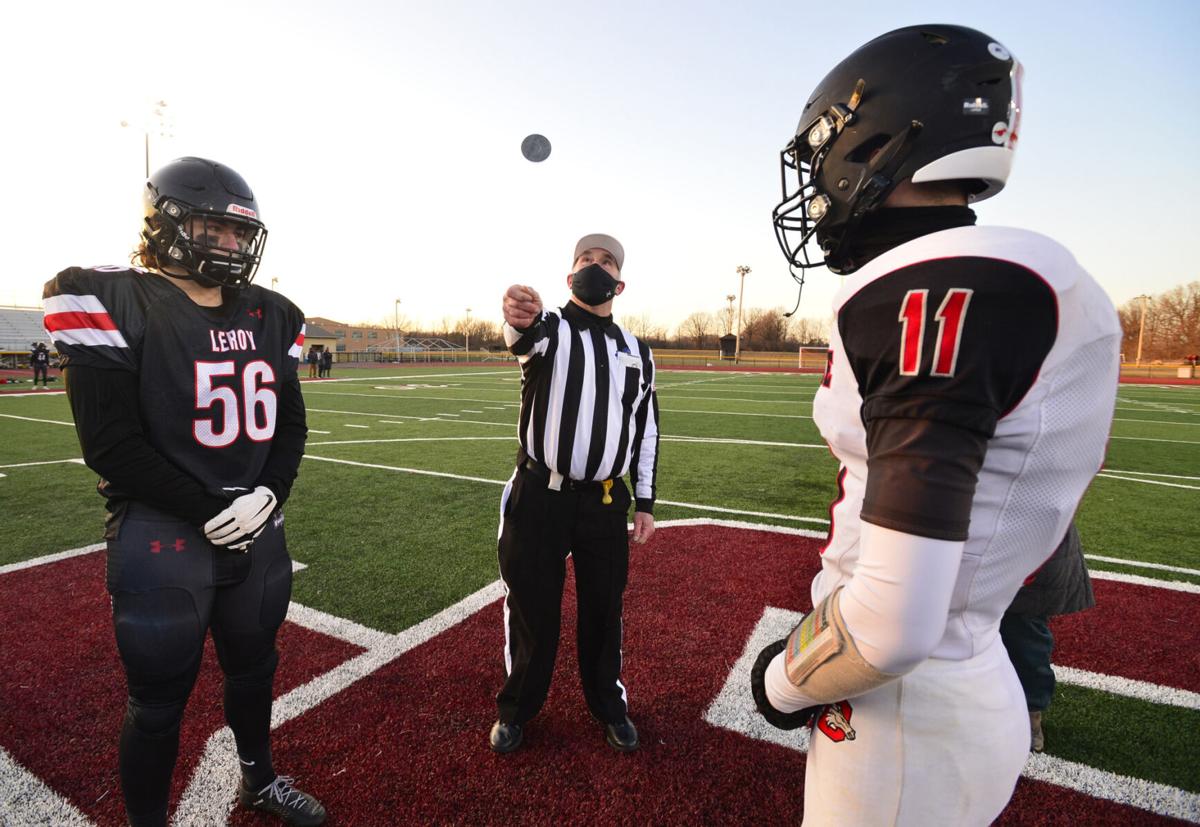 Mark Gutman/Daily News The coin flip at the start of the game in Caledonia on Friday night. 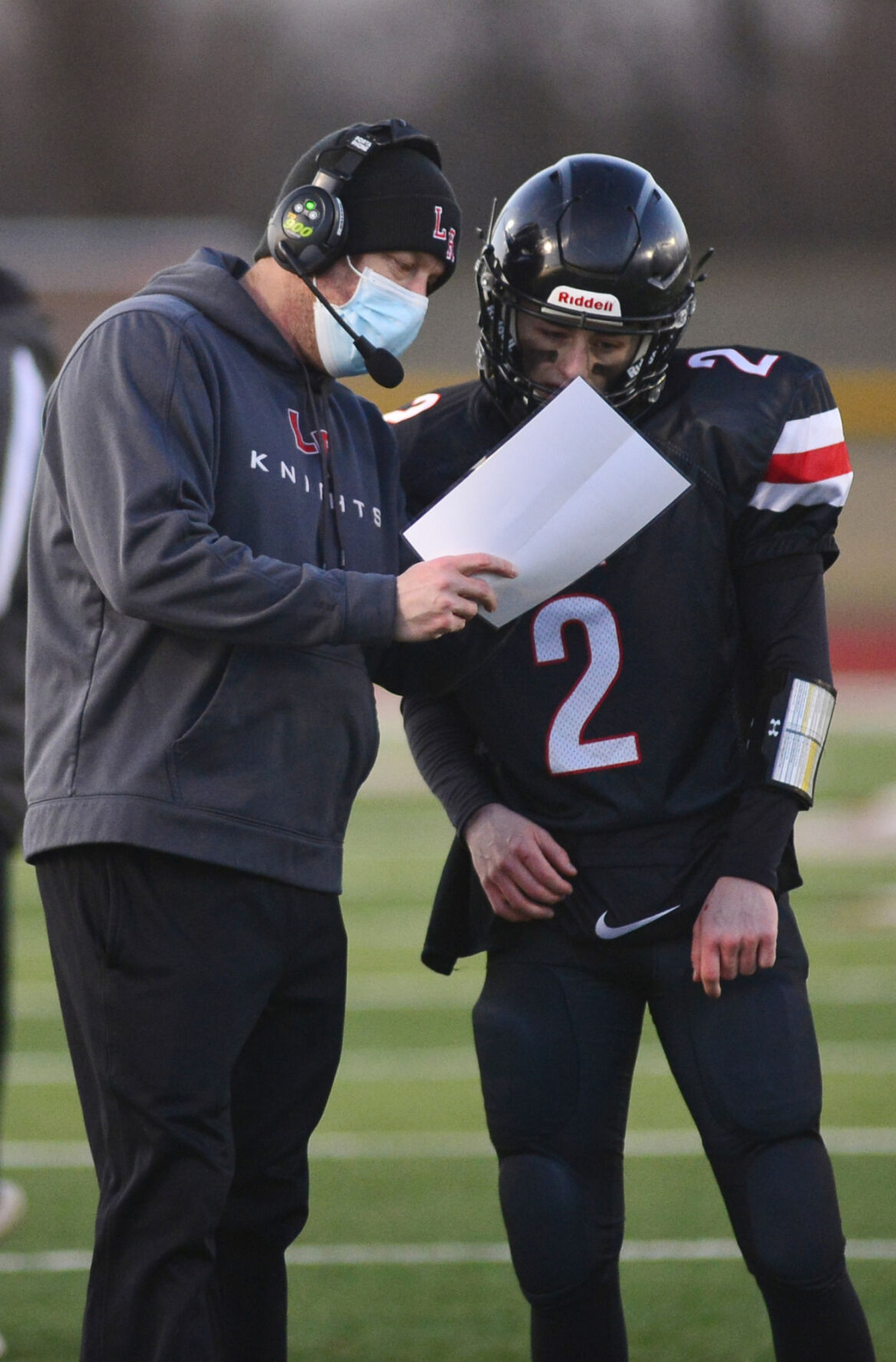 Mark Gutman/Daily News Adam Risewick evades a Dansville defender in the 1st half.

Mark Gutman/Daily News First TD of the season for LeRoy, as Cody Lytle makes a leaping catch as he is defended by Dansville's Calab Rigdon.

Mark Gutman/Daily News LeRoy QB Alex Panepento was awarded the Casella Waste Player of the Game. The game is available for replay on the Batavia Daily News YouTube Channel.

Mark Gutman/Daily News The coin flip at the start of the game in Caledonia on Friday night.

CALEDONIA — In a season that is anything but typical, the weird got weirder on Friday night as the Le Roy Knights opened with a 19-0 win over Dansville on the home turf of longtime rival Cal-Mum.

Those schools that play their home football games on natural grass, damp early-spring conditions have forced many to look beyond their home stadiums for game days. The Knights called on the rival Raiders, and they answered the bell, playing host to Le Roy’s shutout victory over the Mustangs on a calm, crisp night at Hamilton Field.

Senior quarterback Alex Panepento finished with two touchdown passes and 121 yards through the air to go with 62 rushing yards, which was enough to earn him the Casella Waste Player of the Game in his first career start under center.

“Just what I expected,” said Le Roy head coach Brian Herdlein about Panepento’s performance. “There’s going to be a learning curve. He made some great plays on the move and commanded the offense well. On short practice time, I thought he performed well.”

The Knights’ shutout win can be viewed on replay by visiting the Batavia Daily News YouTube Channel.

“It was sloppy,” added Herdlein. “But we’ll always take the first win.”

Panepento’s first TD pass gave Le Roy the lead 5:26 into the game. A lengthy Knights’ drive ended with a scoring toss from the senior gunslinger to senior wide receiver Cody Lytle, who came down with a jump ball to give LR a 6-0 advantage, as the PAT from junior kicker Mitchell Hockey was blocked. Senior RB Nate Andrews found the end zone before the first quarter was through, scoring on a one-yard run with 1:28 remaining in the frame to increase the Knights’ lead to 12-0 after a failed two-point try. Lytle caught Panepento’s second TD pass with 2:45 remaining in the third quarter on a 25-yard pitch and catch, giving the Knights an 18-0 cushion. A successful PAT from Hockey made it 19-0 in favor of Le Roy, where it would stay.

“I thought our young guys played well tonight under the leadership from the returning players,” said Herdlein.

Lytle finished the game with three catches for 46 yards and touchdown grabs of six and 25 yards.

“He can certainly go up and get the ball,” said Herdlein of his senior pass catcher. “We’ll have to find ways to get him the ball.”

Andrews recorded three catches for 60 yards and added 32 rushing yards and the score.

The Knights’ defense, which held opponents to just over 10 points per game last season, pitched a shutout while allowing the Mustangs to gain only 111 yards of total offense (109 rushing, two passing). Senior LB Cole Rauscher recorded six tackles and a diving interception for Le Roy. Rauscher’s pick ended Dansville’s best drive of the first half which appeared destined for the end zone. Andrews made three stops, two for a loss, and recovered a fumble. Senior defensive lineman Zach Vanderhoof made five tackles for the Knights.

“I thought our defense was very aggressive tonight and flew to the football,” added Herdlein.

A bit of bad news for LR, senior lineman Jimmy Burns exited the game in the first half due to a leg injury and didn’t return.

Le Roy begins the season at 1-0 and now looks ahead to Attica next Friday. Dansville is 0-1 and will take on Letchworth/Warsaw (0-1) next Saturday.

The Red Raiders stormed back from a two-touchdown deficit to escape opening night with a four-point win. Running back Brennan Khork had a massive night for Hornell, recording 347 rushing yards and five rushing touchdowns.

Friday’s game featured contrasting styles, as Hornell threw for just 14 passing yards but ran for a total of 357, and Letchworth/Warsaw ran for only 30 yards but went for 281 total through the air. Hornell’s vaunted rushing attack allowed them to move the ball more consistently throughout the game, as they finished with 20 first downs, while LetSaw relied on the big play and finished with only 10 first downs.

For L/S, senior quarterback Austin Williams completed six of nine passes for 260 yards and three scores, while Hunter Elliott added a 21-yard touchdown toss to go with 96 receiving yards and a TD reception. Senior wideout Eddie Stores finished with two catches for 71 yards and two touchdowns to go with a big night defensively, where he made four tackles for loss. Aaron Miller caught two balls for 70 yards and a score. Ethan Schroder caught one pass for 44 yards for LetSaw.

Hornell QB Dominic Nasca completed just one pass, but it went for a 14-yard touchdown to Nicholas Oyer, who finished the game a perfect six of six on extra points. Khork recorded 38 carries and 9.1 yards per tote for the Raiders. Nathan Day came away with three sacks for Hornell, which begins the year at 1-0.

Other scores from Friday night: