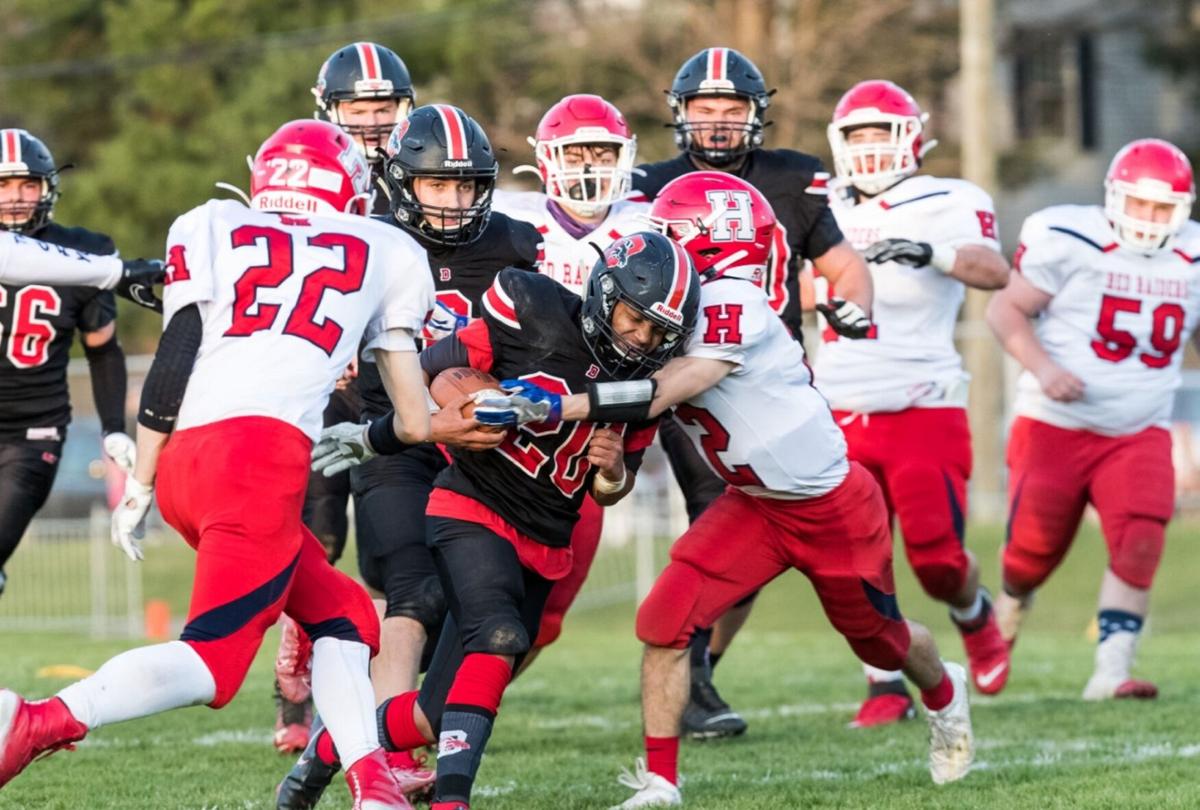 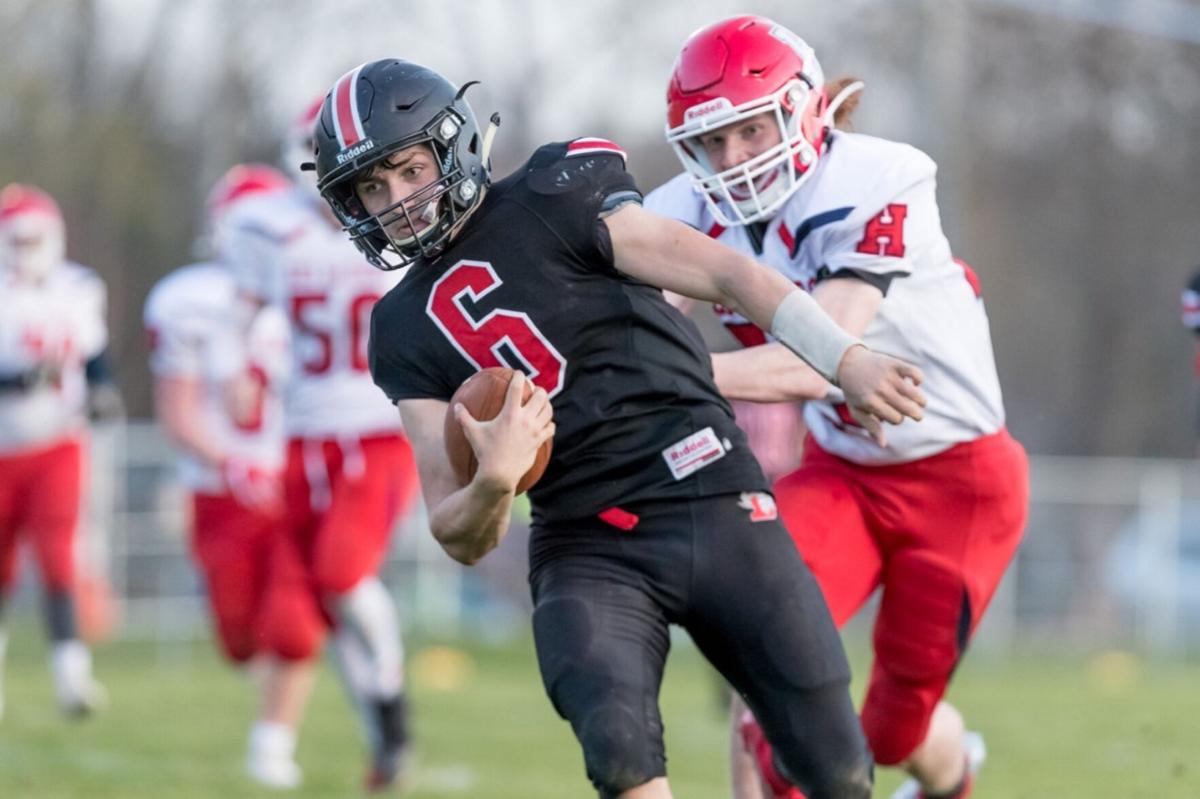 Photos by Steve Harrison Dansville's Evan Pruonto picks up some first half yards against Hornell Wednesday. 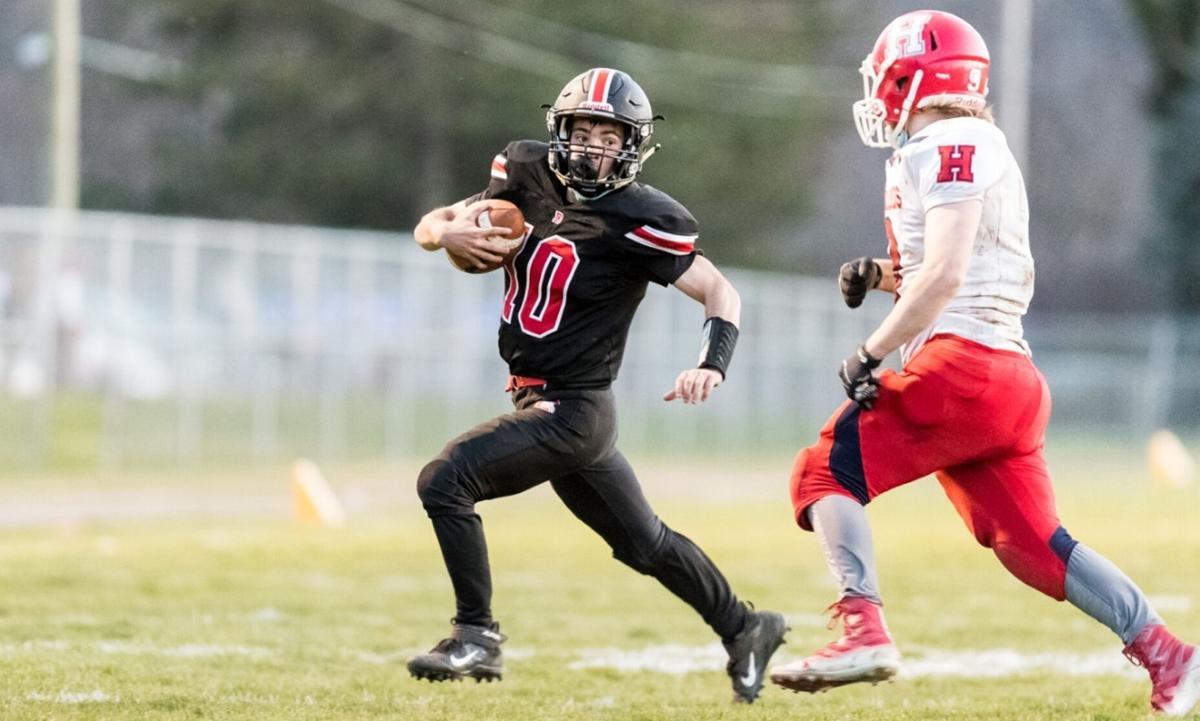 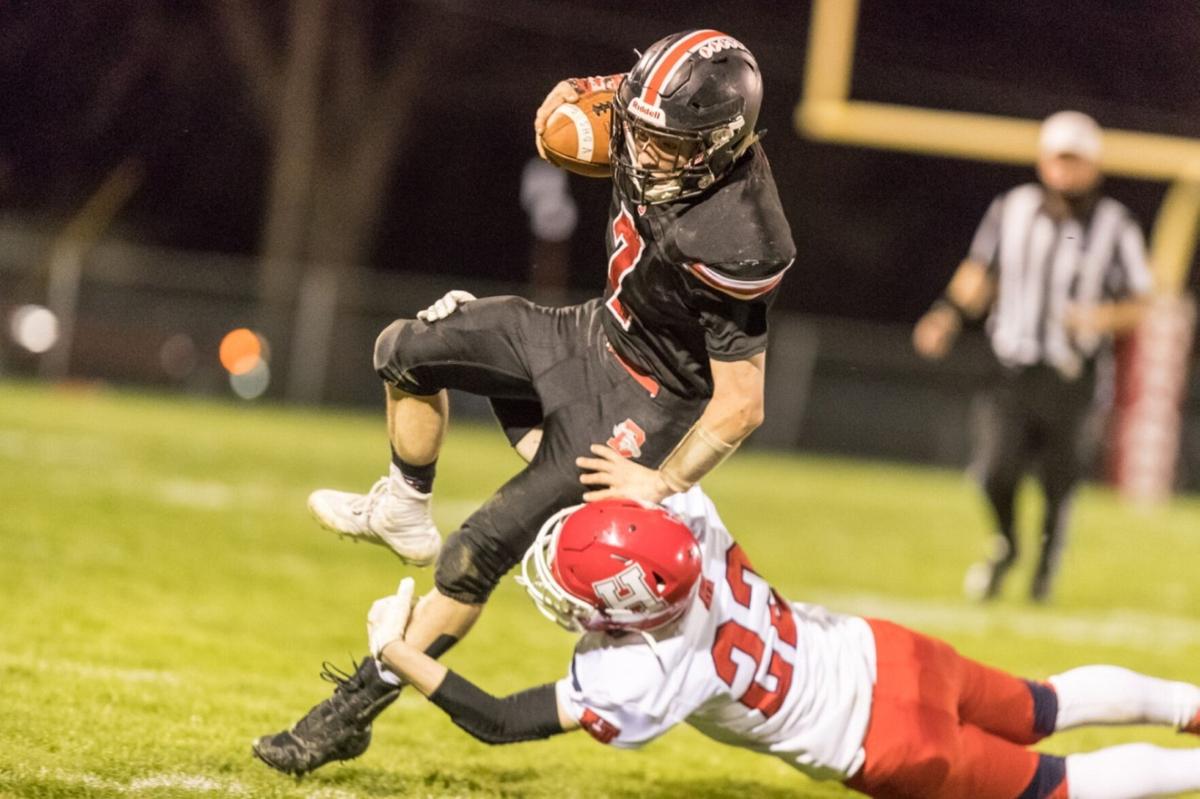 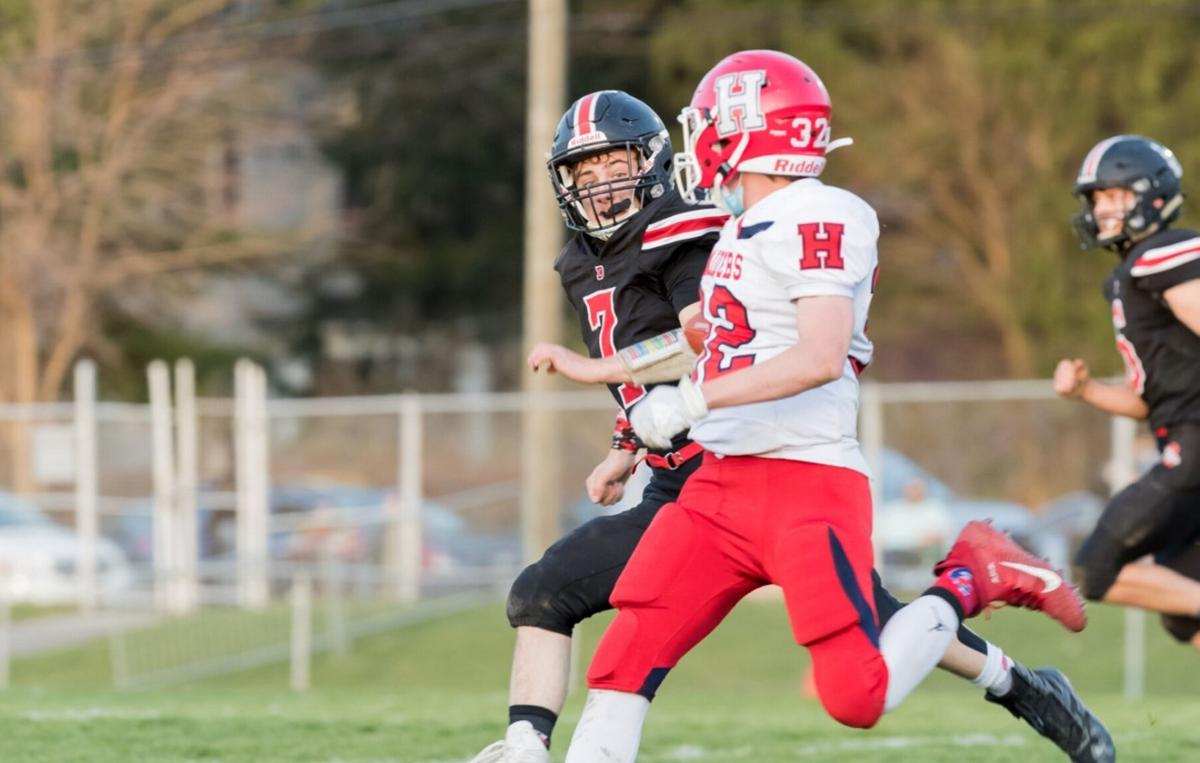 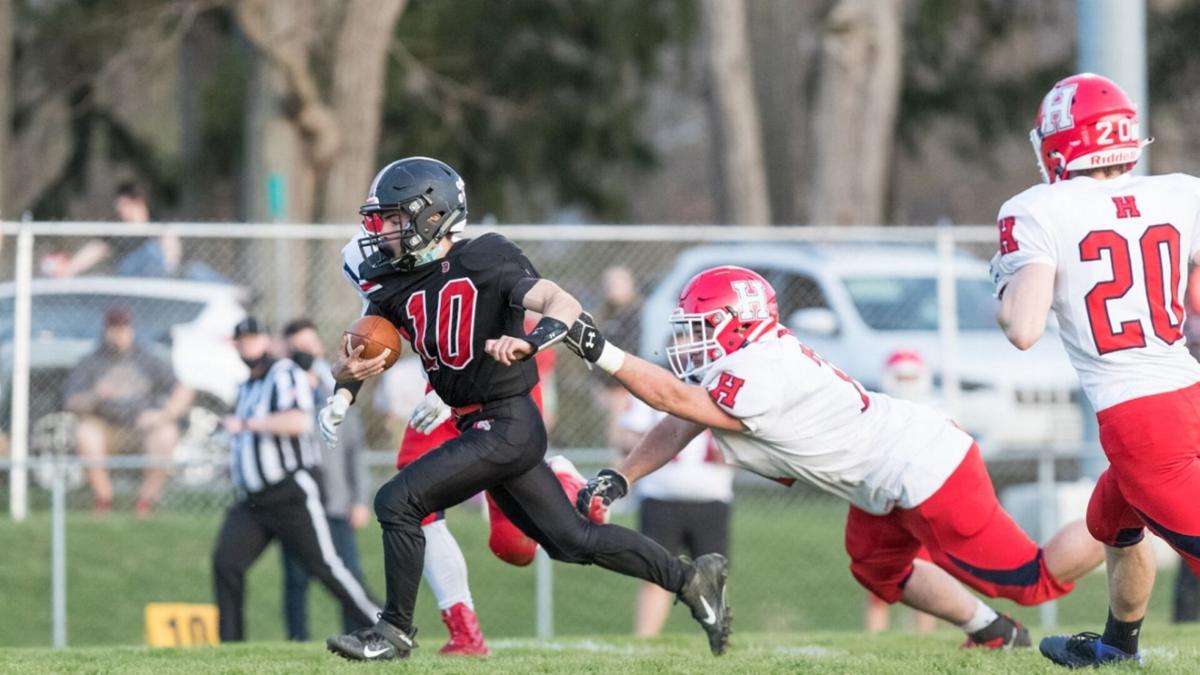 Photos by Steve Harrison Dansville's Evan Pruonto picks up some first half yards against Hornell Wednesday.

DANSVILLE — Visiting Hornell took advantage of some untimely second half Dansville miscues as the Red Raiders built a 28-18 lead late to eventually hold on for the thrilling 28-26 victory over the Mustangs on a beautiful Wednesday night at Ralph Clements Field in Dansvillle.

This one went back and forth most of the night.

Hornell junior Mason Drew was the workhorse in the backfield for the Red Raiders as he scored on a 4-yard TD run with 3:35 left in the first period to put Hornell on top 7-0.

Dansville answered back as Calab Rigdon turned a broken play into a 16 yard touchdown run with 10:30 left in the first half to cut the deficit to 7-6.

Rigdon’s 17-yard TD run would put the Mustangs in the lead at 12-7 late in the second quarter.

But Hornell would have lady luck on their side as Dom Nasca connected with wideout Griffyn Baker for a 25 yard touchdown pass on the final play of the first half that swung the momentum back to Hornell as they grabbed the lead.

The touchdown came on a third and goal from the 25 with just three ticks left when Baker split two defenders on a well thrown ball by Nasca.

But Dansville responded once again as they regained the lead midway through the third period as Ryan Carnevale slipped across the goal line from three yards out with 5:16 left in the third as the Mustangs went up 18-14.

Unfortunately for the Mustangs’ defense, they could not stop Hornell on the next series as the Red Raiders put together a 55-yard drive that started in the third period and finished early in the fourth when Nasca capped the series with a five yard QB draw that found the endzone and following the successful PAT kick the Red Raiders forged ahead at 21-18.

Dansville’s ensuing drive ended in disaster as they put the football on the ground and Hornell lineman Alex Lockwood fell on it on the Mustang 43 putting the Red Raiders back in business.

That’s when Drew went back to work as he picked up some first downs and ended the drive with a six yard TD run with 4:47 left to put Hornell up double digits at 28-18.

But there was absolutely no quit in these Mustangs as Dansville responded — this even after a big Hornell sack forced Dansville into third and long — as Rigdon rolled out of the pocket and fired a pass in the flat to wide receiver Drew Morrow who had curled to the inside and then flipped the football to Evan Pruonto who raced around the outside for the touchdown that cut the deficit to 28-24 with 2:19 left.

Morrow, the 6-foot-4 junior, would go up and catch the two-point throw from Rigdon to cut the deficit to just two points at 28-26.

Unfortunately for the Mustangs, their attempt at getting the football back on the onsides kick would fall short giving Hornell the victory after running out the clock.

Pruonto had a solid game rushing for Dansville with 85 yards on eight carries and one TD while Carnevale pounded out 65 tough yards on 16 touches and one score.

Rigdon, who ran for 20 yards was also 3-of-5 passing for 59 yards hitting Morrow all three times and also on a two-point conversion.

Defensively, Pruonto and Cam Cartwright were all over the field with 14 and 12 tackles respectively.

Gus Swyers added nine stops while Carnevale made seven tackles with Shane Crandall and Holdyn Freeman each with five tackles. Freeman also had a fumble recovery and a sack for the Mustangs.

The victory for Hornell improved the Red Raiders to 2-2 while Dansville fell to 1-3 on the season.

Both teams will not qualify for sectionals as four teams in Class C are all 4-0 and only four teams make it.

Dansville heads to Mynderse Academy on Tuesday for their next game.

The Golden Eagles picked up their first win of the season, 28-7, over the Wildcats in a game played on the turf in Penn Yan.

Ben Teed carried the ball six times for 25 yards and a TD, while Caleb Hanggi, Brady Knudsen and Brogan Cotter each added touchdowns. Cotter also went 4 of 4 on PATs.

Defensively, Jack Mulford made 13 tackles, recovered two fumbles and came away with a sack for W-C. Cotter, Charley Drew and Ryan Belanger all made five tackles for the Eagles, with Cotter adding an interception and Drew and Belanger each recording a sack.

“Our boys played very well and our offense was able to open up the playbook and move the ball well both on the ground and in the air,” Way-Co head coach Darren Knapp said.

The undefeated and host Rams held on the beat Penn Yan/Dundee in a game that shouldn’t have been as close as the final score.

After seizing a 38-12 lead at halftime, B-H allowed PY/D to fight their way back into the game, but the second half rally came up just short and the Rams survived a serious scare to remain unbeaten. Bath-Haverling gained a total of 413 yards in the win, 156 of which came on account of Brayden Hess’ 14 carries. A.J. Brotz had a big day as well, including a 75-yard touchdown run which helped him to a seven-carry, 94-yard night. Keian McRae had only one carry for the Rams but took it for a 16-yard score.

Justin Yehl led the way in the passing game, throwing for 65 yards on five completions, including two TDs. Brotz caught both touchdowns and finished with four receptions for 64 yards.

For the Rams’ defense, Josh Miles made seven tackles and forced a fumble. Brotz finished with five tackles and made two interceptions. Hunter Cupp recovered a fumble and returned it 30 yards, while Austin Thorius added five tackles.

On special teams, Curtis Conrad made two onside kick recoveries for B-H in the second half.

Bath-Haverling has a huge road test next Tuesday night when they take on undefeated Waterloo at Tom Coughlin Field with the winner of that game possibly earning a number one seed in Class C,