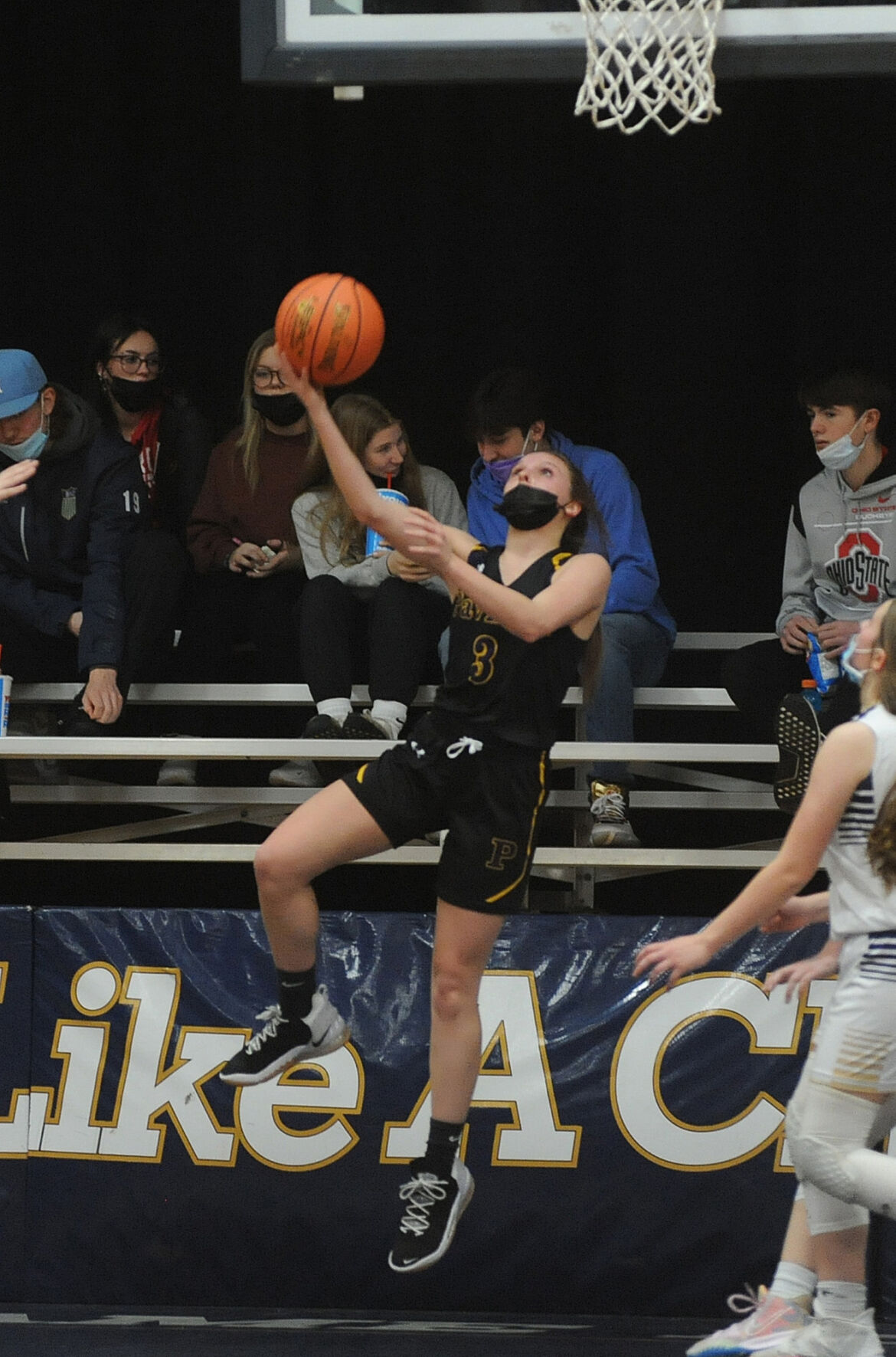 Mark Gutman/Daily News Pavilion’s Karlee Zinkievich (left) and Lauren Kingsley (right) have the Gophers off to a 10-1 record to the season, 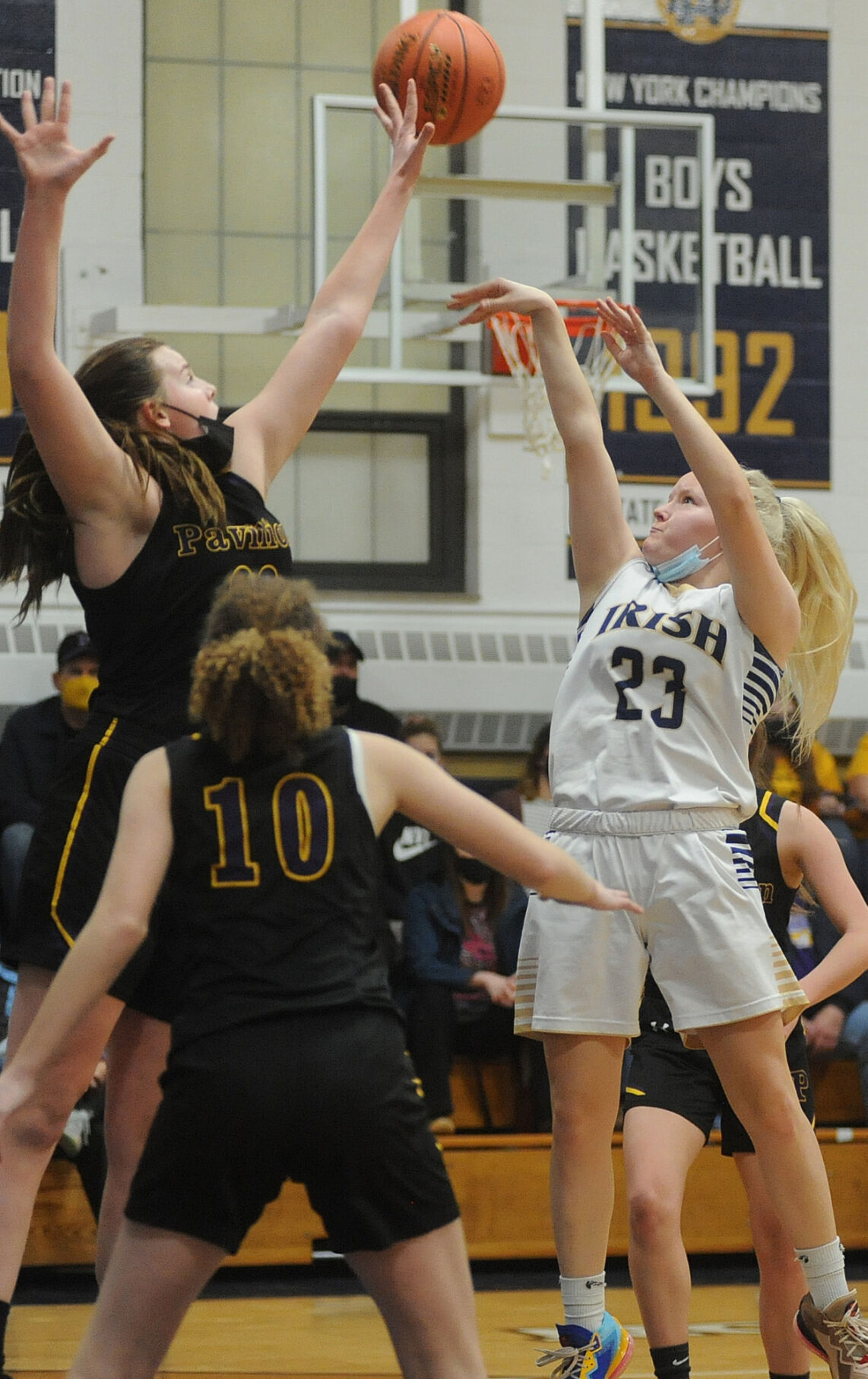 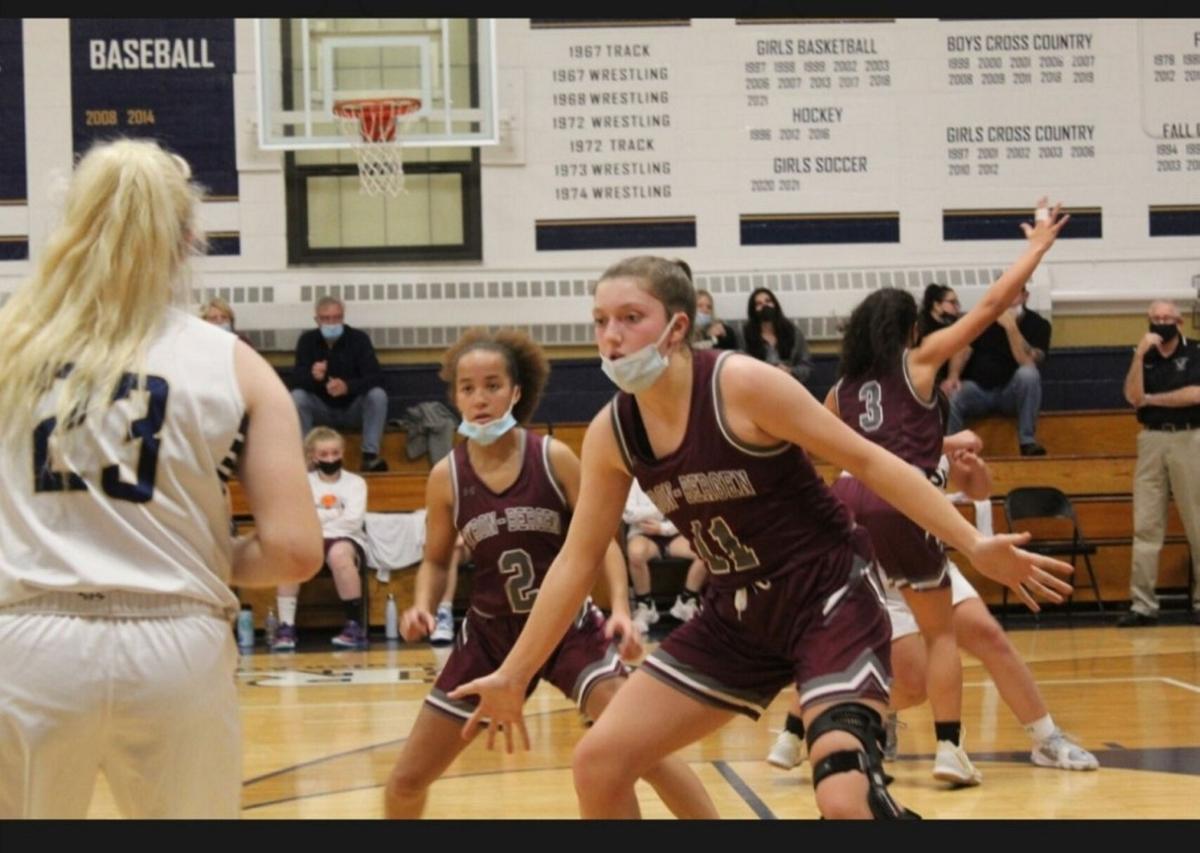 Photo Courtesy Byron-Bergen Girls Basketball Byron-Bergen’s Kendall Phillips is in a defensive position during the win over Notre Dame on Thursday night. Ava Wagoner (2) is in the background for the Bees. 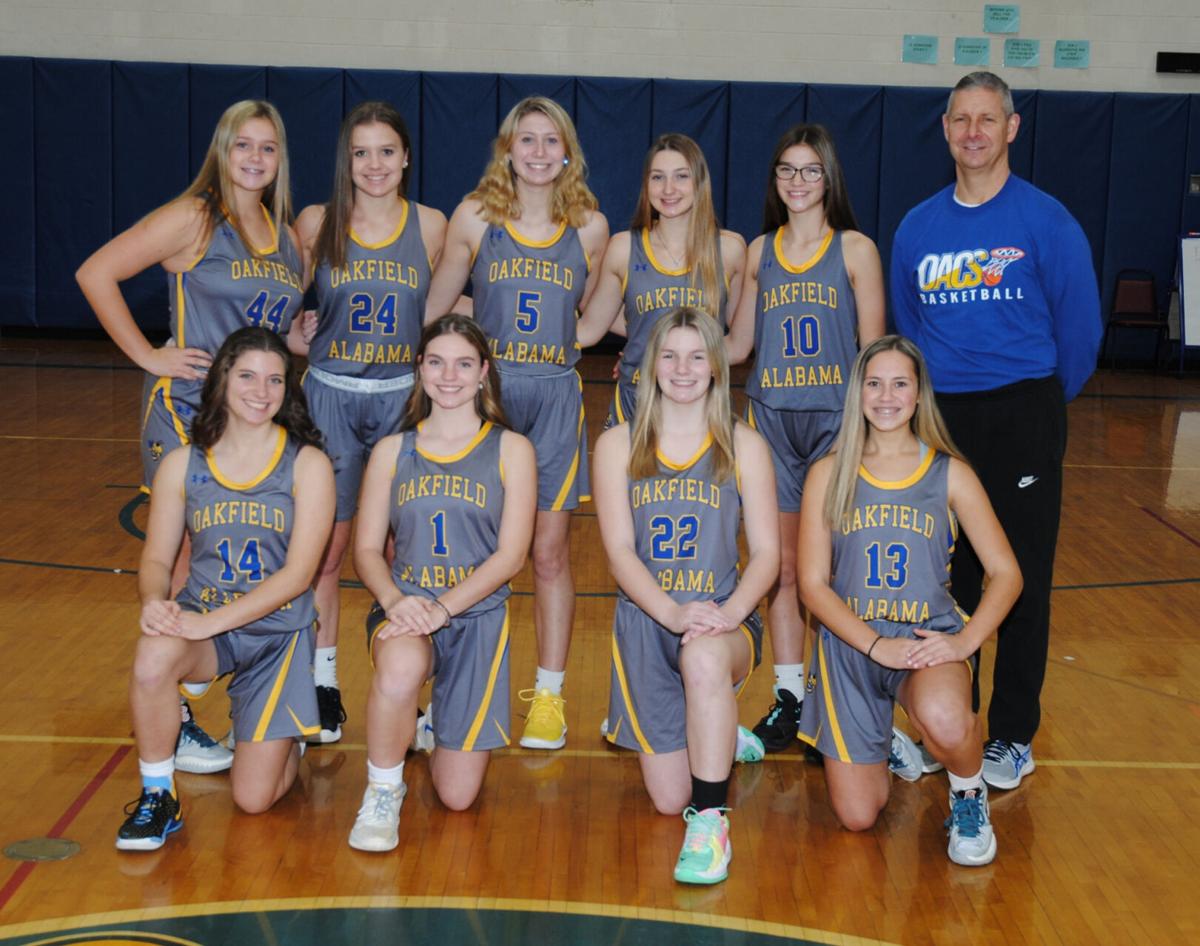 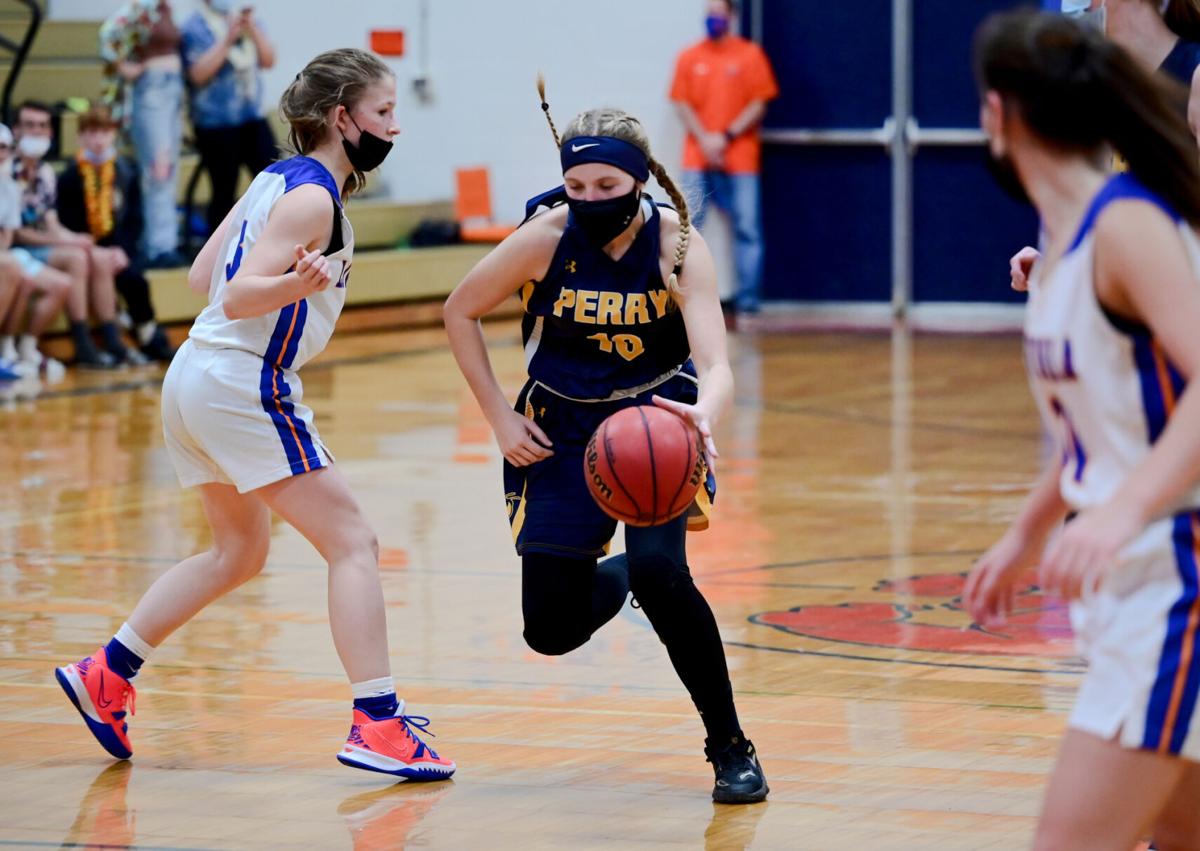 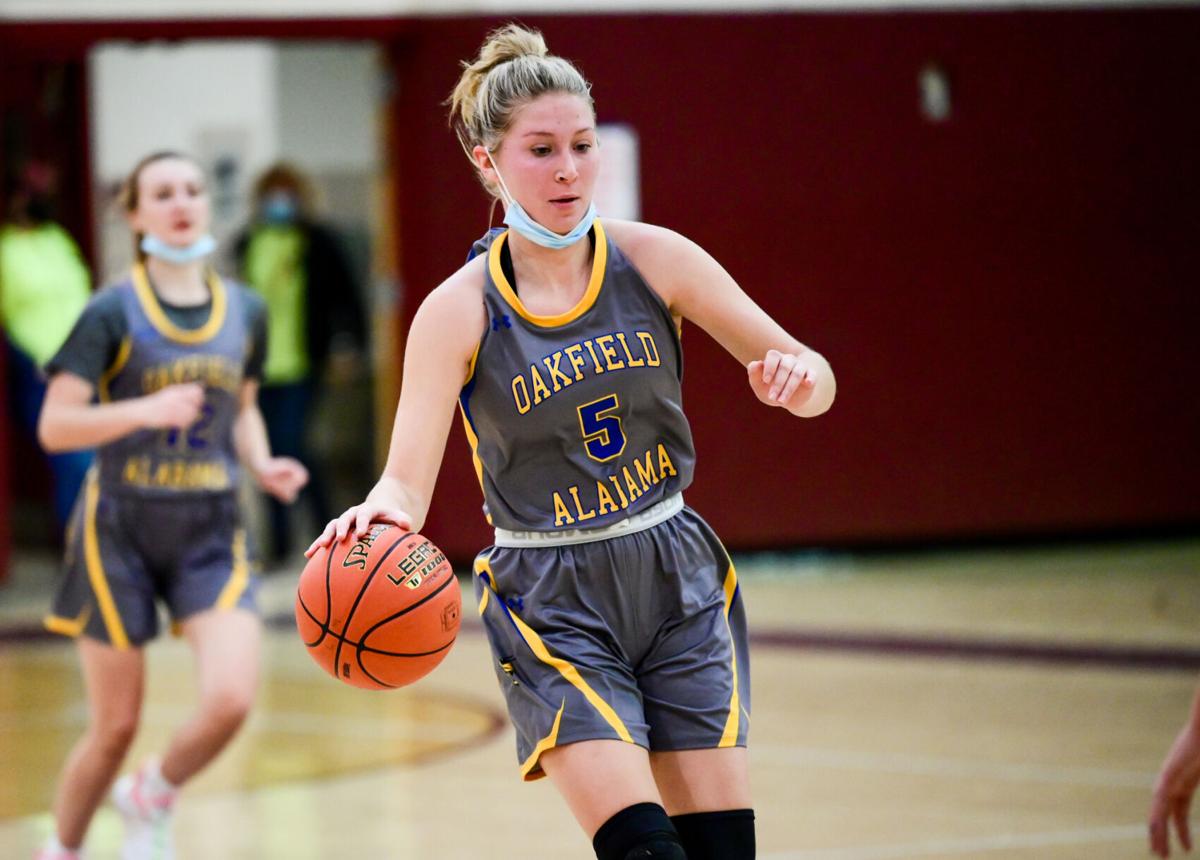 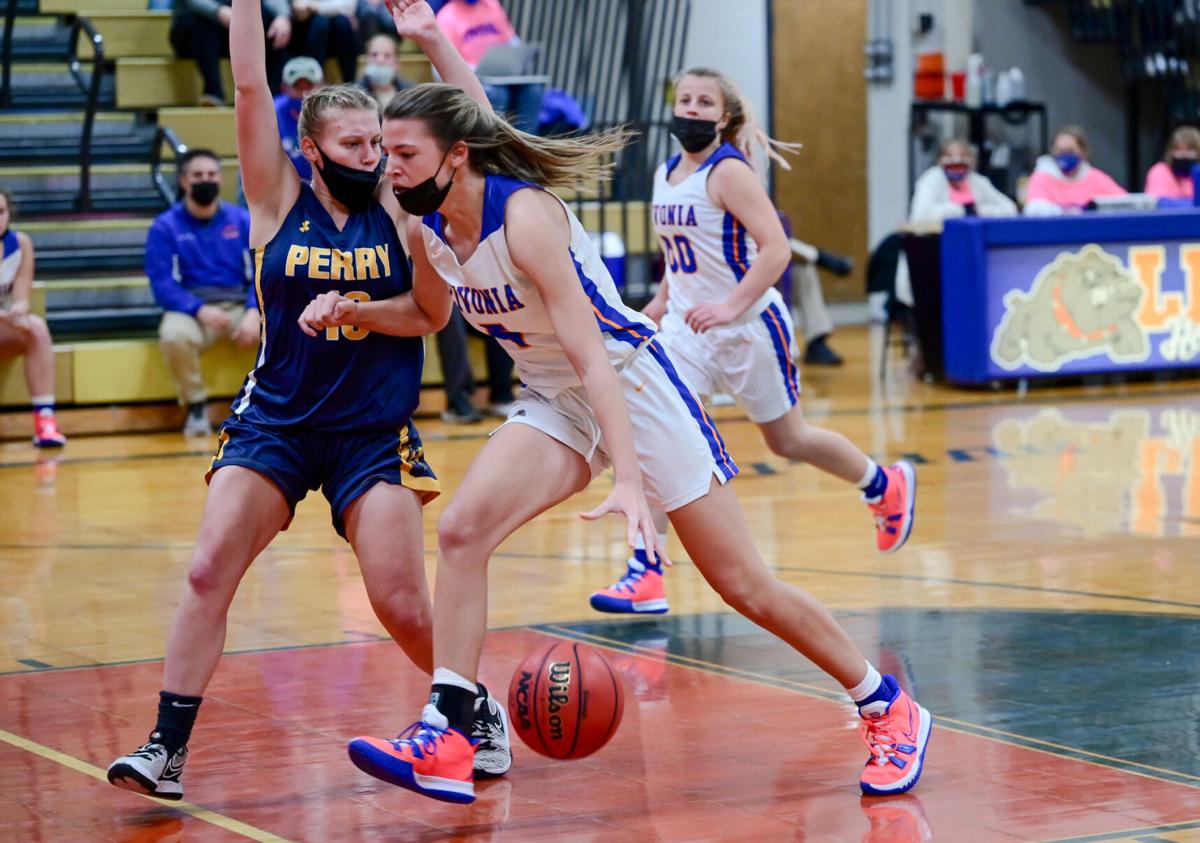 Mark Gutman/Daily News Pavilion’s Karlee Zinkievich (left) and Lauren Kingsley (right) have the Gophers off to a 10-1 record to the season,

Photo Courtesy Byron-Bergen Girls Basketball Byron-Bergen’s Kendall Phillips is in a defensive position during the win over Notre Dame on Thursday night. Ava Wagoner (2) is in the background for the Bees.

Last week we took a look at the boys players that are in mid-season contention for the Daily News Fab-5 team and Player of the Year and now it is time to take a look at the girls. And the running is just as up in the air.

With several teams in the mix for a sectional title and off to impressive starts, coming with it has been a number of strong individual performances along the way in a balanced season. From surprise teams such as Kendall, to perennially strong teams such as Oakfield-Alabama and preseason favorites such as Pavilion, the season on the hardwood is off to an exciting start with more to come.

Here is a look at this season’s players topping the list:

NATALIE WHITMORE, Alexander — The Trojans have had an up-and-down season so far at just 6-5 but of their five losses, four have come by single digits, while three have come to one-loss teams. A longtime varsity member and a force in the paint for a number of years, Whitmore has been one of the most dominant players in the GR this season. Averaging a double-double, Whitmore leads Alexander in scoring at 13.5 points per game, while in a setback to one-loss Lyndonville earlier in the week she put together one of the best games of her career with 27 points, 15 rebounds, six steals and five assists.

With dynamic freshman guard Alyssa Kramer (11 ppg.) injured early in that game and her future unknown, Whitmore could be the one to lead Alexander to a deep sectional run this winter.

EMILY GERSITZ, CHASE HARDING, Attica — With three straight wins, the Blue Devils have quietly moved out to 7-2 on the season and this senior duo has been a big part of that balanced attack. In just her second varsity season she is averaging a big double-double of 10 points and 14.3 rebounds per game to go with 3.5 steals per night. Meanwhile, Harding — who is in her fourth varsity campaign — does a little bit of everything. The guard leads the team with 10.6 points per game to go with 5.9 rebounds, four assists and three steals per night.

With losses to just one-loss Kendall and Oakfield-Alabama, the Blue Devils have a big three-game stretch starting next week with Byron-Bergen, one-loss Lyndonville and red-hot Elba.

KENDALL PHILLIPS, Byron-Bergen — The Bees got off to an impressive 5-0 start but have scuffled of late, dropping three of their last four. However, those setbacks have been narrow losses to undefeated Pavilion and one-loss Lyndonville and Kendall. Still just a junior on a young team that features just two seniors, Phillips is the Swiss Army Knife for the Bees. The guard leads the team with 11.1 points per game to go with 5.3 rebounds and two assists per night.

She will be counted on if the Bees are going to get back on track as they have three tough games ahead starting Friday with Pembroke, and then Attica and Alexander.

HAZELL NICKERSON, Caledonia-Mumford — Still just a freshman, Nickerson is a team captain for the Raiders and has been a big part of them winning three of their last four games to move to 6-5 on the season. A force in the post, the forward is averaging a double-double with 12 points and 13 rebounds per night to go with 3.5 blocks per game.

Along with freshman guard Ava Amorese, Nickerson makes up a dynamic young duo that has the future bright for Cal-Mum for years to come. Though with a somewhat favorable schedule to close out the season, the Raiders could be looking to make some noise this season.

DAKOTA BRINKMAN, Elba — The Lancers, after losing a plethora of longtime varsity players — and three 1,000-point scorers to graduation — got off to a tough start to the season, dropping their first two games and beginning the winter at 2-4. However, this young and inexperienced team has seemingly started to grow into its own.

With a huge upset of previously undefeated Oakfield-Alabama earlier in the week, Elba had won three in a row heading into a Friday night game with Alexander. In her third and final varsity season, Brinkman is a hold-over from the Lancers teams that won five straight sectional titles and this season she leads the team with 11 points per game. Brinkman knows what winning looks like and that could be huge for this young group,

ELIZABETH SNYDER, Kendall — The Eagles are off to one of the best starts in program history at 9-1 heading into Friday night’s huge game with GR foe Lyndonville and this senior forward has been a big part of it.

Snyder is averaging a monster double-double with 12.7 points and 13.4 rebounds per game, while she also blocks 5.5 shots per night and averages 2.4 steals and two assists per game. Snyder is also a key cog in the Kendall defense that is surrendering under 25 points per game through the first half of the season.

Starting Friday the Eagles’ schedule will get tougher – with Elba and Note Dame to follow — but this team has proven it could be a force come sectional time.

KYLIE BUCKLEY, Livonia — This junior forward has helped lead the Bulldogs to a solid 7-3 start to the season. Buckley is averaging a double-double with 23 points and 10.8 rebounds per night to go with 3.7 steals, 2.6 blocks and 2.2 assists per game.

ELLA LEWIS, Lyndonville — In her fifth varsity season, this senior captain guard has flown under the radar as one of the top guards in the league for a couple of years. This season Lewis and the Tigers had gotten off to an impressive 8-1 start heading into a big game with one-loss Kendall on Friday night.

Along with running the floor, Lewis leads the Tigers with 12.9 points per game and is one of three players — Lorelei Dillenbeck (10.9 ppg.) and Karlee Rounds (10.9 ppg.) — that is averaging double figures this winter for a balanced offensive effort that has seen the Tigers only fall to Notre Dame early in the season.

KELSEY SCHLAGENHAUF, CAITLIN RYAN, Oakfield-Alabama — Despite the stunning loss to Elba earlier in the week that saw the Hornets’ undefeated season come to an end, Schlagenhauf and Ryan have been two of the best players in the GR all season.

At 10-1, O-A is still primed for a high sectional seed and a run at a block and the senior G/F Schlagenhauf and sophomore guard Ryan have led the way. Schlagenhauf is just short of averaging a double-double with a team-high 11.1 points and nine rebounds per night, while she also averages 3.8 steals and two assists. Ryan is also having a quality season with 9.4 points and seven rebounds per game to go with nearly three steals and two assists per night.

LAUREN KINGSLEY, KARLEE ZINKIEVICH, Pavilion — Arguably the two best players in the area on one of the best teams, this pair has been doing it for years and is getting it done once again in their junior year together,

Following a dominant win over a solid Notre Dame team early in the week, the Golden Gophers are off to an impressive 9-0 start and are looking to get the sectional block back and they will do it behind this duo. Kingsley leads the team with 15.7 points and 5.8 blocks per game, while she is second on the team with 10.3 rebounds per night; Kingsley also averages nearly four assists per game.

Zinkievich is the floor leader and she leads the Gophers with 7.1 assists per game to go with 12.9 points, four rebounds and three steals per night.

Pavilion started its second half of the season on Friday with a game against rival York, the team that cost the Gophers their second straight sectional title last season.

KARLI HOUSEKNECHT, Pembroke — A junior guard on a team that features just two seasons, Houseknecht has come into her own this winter and was the Genesee Region Player of the Week last week.

Houseknecht leads the Dragons with 12.4 points per game to go with four steals and three rebounds per night. Pembroke is still finding its footing at 5-5 this season, but the program isn’t that far removed from winning back-to-back sectional titles.

MCKENNA KELLY, Perry — The Yellowjackets have struggled to a 3-7 start to the season but it hasn’t been because of this three-year varsity senior guard.

One of the top scorers in the area, Kelly is averaging a career-high 16.8 points per game to with 6.1 rebounds and two assists per night.

Perry looked to get back in the win column on Friday night at Mt. Morris before a tough, three-game stretch to follow with games against Avon, Pavilion and Attica.

EMMA TANGEMAN, Warsaw — It’s been a tough season for the Tigers at just 2-8 but Tangeman has continued to do her part in her third and final varsity season.

The 6-foot forward is nearly averaging a double-double with 10 points and 9.8 rebounds per night to go with three blocks and two steals per game.

Losers of four straight games, the Tigers will look to get back on track with home games against Arkport and Keshequa coming up.

KATELYN CURRY, SYDNEE EMERSON, York — The defending Section V Class C2 champions are off to a strong 8-2 start to the season and these longtime varsity seniors are leading the way.

A guard, Emerson does a little bit of everything and leads the team with 13.4 points to go with 4.6 rebounds per game. Senior forward Curry averages 11 points per game and is the team’s leading rebounder as the Golden Knights have won three in a row since a loss to then-undefeated Oakfield-Alabama.

York played the first of two games this season with Pavilion in a rematch of last year’s sectional title game on Friday night to start the season half.