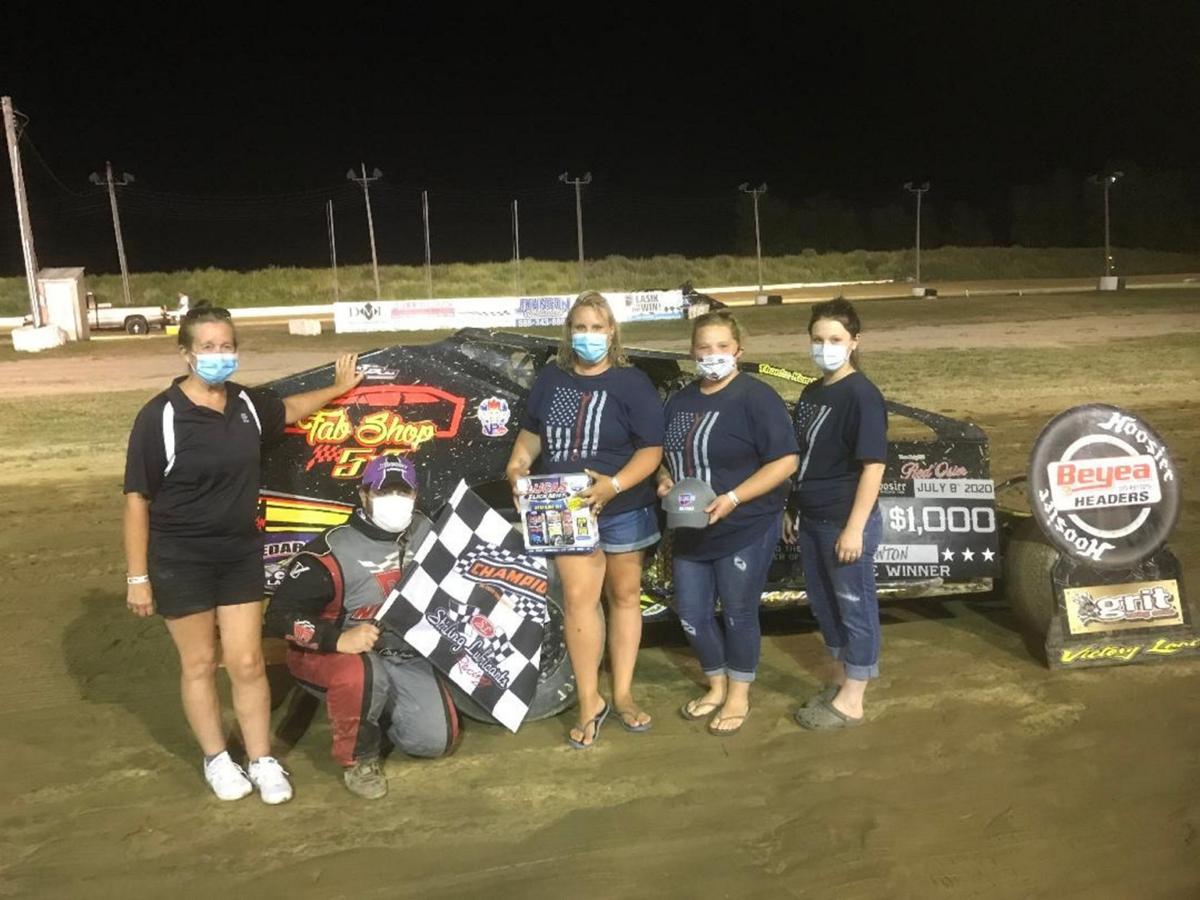 Provided Ricky Newton held off a stout field to win the 30-lap GRIT Sportsman Tour event at Genesee Speedway on Thursday Night and the $1,000 top prize. 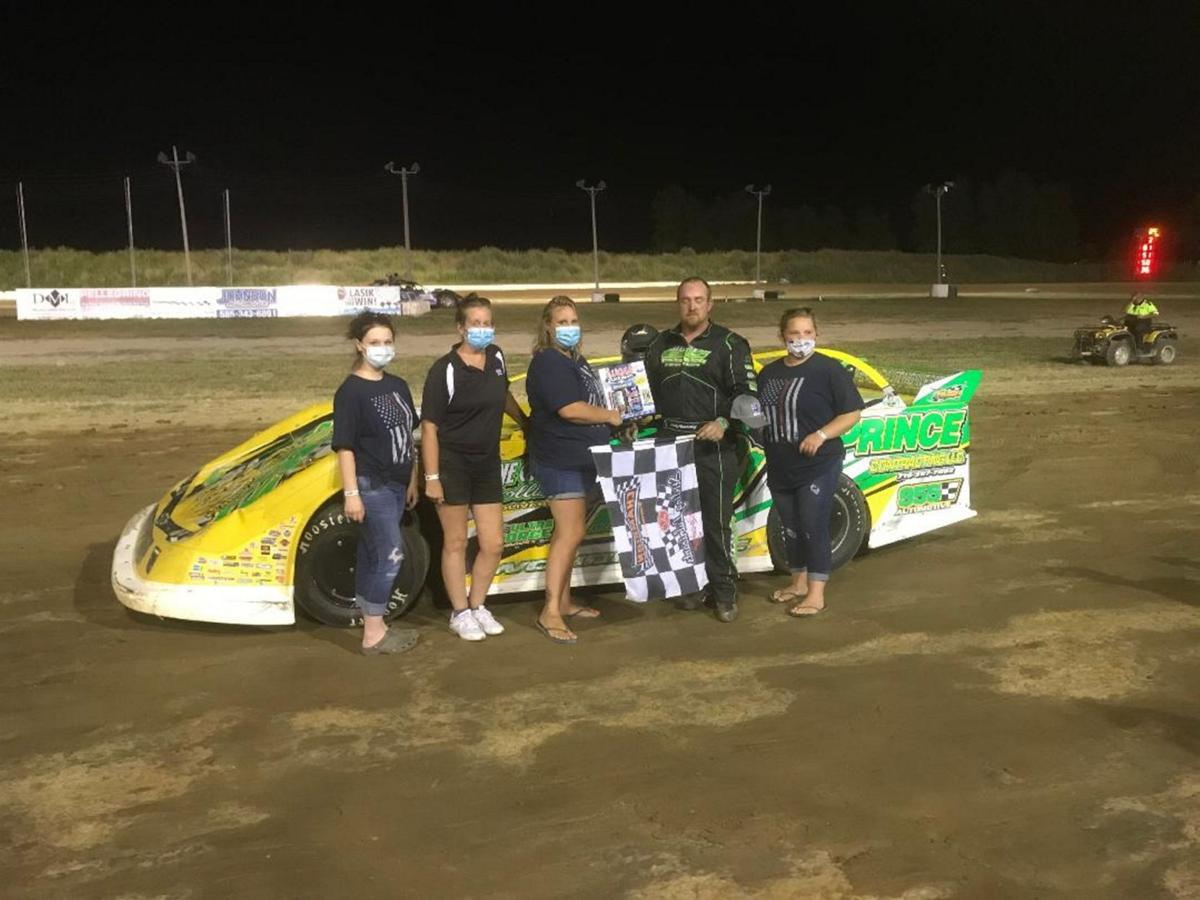 Provided Jeremy Wonderling won his second race in as many events at Genesee Speedway with his victory Thursday on Carquest Night.

Provided Ricky Newton held off a stout field to win the 30-lap GRIT Sportsman Tour event at Genesee Speedway on Thursday Night and the $1,000 top prize.

Provided Jeremy Wonderling won his second race in as many events at Genesee Speedway with his victory Thursday on Carquest Night.

BATAVIA — A scorching-hot afternoon in Genesee County turned in to a combustible evening as lightning danced around the Genesee Speedway; thankfully the only thing that hit the 1/3-mile oval were nearly 100 race cars on a near-perfect race surface.

With fans back in the stands for the second time in five days, the Genesee Speedway roared back to life with a show that was pushed at a fast pace with storms and showers from every direction narrowly missing the fairgrounds by less than 5 miles. When all was said and done and six interviews were set up with the race winners, a host of new names were parked on the front stretch for the first time in 2020.

The sportsman event was made a GRIT Racing Series Tour event and the 30-lap $1,000 event sure did not disappoint. With just one caution and six drivers dicing it out inside the top five down the stretch almost everyone in attendance was on the edge of their seats, except Ricky Newton that is, who had no idea what was going on behind him.

Newton, of Oakfield, led all 30 laps to score his first win at his local track since 2018.

“It was a pretty normal race for me out front,” admitted Newton in Victory Lane. “I didn’t hear anyone behind me or see anyone so I just ran my race and tried to hit my marks.”

On Carquest Night, Newton took the lead from the drop of the green flag from the outside of the front row but would find a pair of stalkers on his rear bumper until the race’s only caution on lap 19.

Jonathan Reid and Dave Conant stayed within two seconds of Newton’s No. 11N while battling with one another for the second spot. On the lap 20 restart though, Cam Tuttle threw his name in to the mix making a move from 4th to 3rd and almost taking second place away. Tuttle was not the only driver joining the lead group as Garrison Krentz also diced it up within the top five. The restart was also beneficial for Kyle Inman, who had to start at the tail of the field after suffering a mechanical issue in his heat race. Inman charged from 10th to 6th on lap 20 and made it a six-car scramble down the stretch.

Reid was able to lead the second place battle and had his sights set on Newton but there was nothing he could do to take the lead away and would settle with the runner-up finish. Dave Conant would drive back up to third while Krentz and Inman rounded out the strong top five.

The Late Model event was a heavyweight fight contested on a fast but tricky race track. In the end, it was Jeremy Wonderling who would make the power moves to get out front and stay out there.

Wonderling, of Wellsville, captured his second win at Genesee in the last five days with a power move on a lap seven restart to go from fourth to the lead in just one lap. From then on it was smooth sailing for the No. 3J, but up until that point it has been a wild ride.

Doug Ricotta led the opening seven laps but all eyes were on Wonderling who from the opening lap was making moves to the front. “Mr. Excitement” tried two big slide jobs to get by Paul Grigsby without completing the pass, but on his third attempt on lap five Wonderling got in to corner three hot and drifted in to Grigsby, who stopped as a result of the incident. Officials would penalize Wonderling two spots for rough driving.

“I messed up on that one and need to apologize to Paul (Grigsby),” remarked Wonderling after the race. “I had been trying to get by and just got in a little hot and locked it up.”

After going back to sixth Wonderling moved right back up to fourth before another caution flag appeared a lap later. On that restart, Wonderling made his move powering around the outside of turns 1 and 2 to take second and then go over Ricotta for the lead.

“I was surprised to see (Ricotta) on the bottom and had to drive it in deep to get around him on the top,” explained Wonderling.

As Wonderling held a healthy distance Ricotta was able to hold on for second, his best finish of the year. JJ Mazur charged up to complete the podium in third. Austin Hauser had his best career finish in fourth ahead of Brian Kotarski, who rounded out the top five.

The Street Stock Feature saw Josh Pangrazio and John Zimmerman, the two winners thus far in 2020, duel it out for the win in the 20-lap feature. Pangrazio made an incredible charge from 4th to the lead on a lap 4 restart, moving by Dan Schulz coming to the complete the lap and then held back John Zimmerman down the stretch, as the “Z-man” tried the bottom line to reel in the defending track champion. It was the third win in as many attempts in 2020 for Pangrazio, his eighth win in-a-row at Genesee dating back to August of 2019. Zimmerman would hang on for second with Dennis Cummings driving back up to third. Dan Schulz and Jesse Qutermous rounded out the top five.

Cole Susice’s defense of his Mini Stock track championship had not gone the way he planned after the first three races, as he was unable to finish any of those features; but that changed on Thursday as he led wire-to-wire to claim a much-needed win. Susice, of Ransomville, had to fend off the challenges of Brad Shepard in the late stages for his first victory at Genesee since July 2019. On a lap 9 restart, Shepard had a run to the inside of Susice, but a caution flag would reappear before the battle would be sorted out. On the ensuing restart, Susice got the run he needed and would drive off to the win while Shepard settled for second. James Gayton drove up from 19th to finish in third while Brad Whiteside and Eric Brumsted rounded out the top five.

Brian Monahan was another first-time winner in the Novice Sportsman as he led all 15 laps of the feature-only format to win in his first time running in the division at the track. Dylan Duhow gave chase late in the event on a lap 11 restart but just could not make the move to take the lead and settled for second. Tim Nies finished third for the second week in a row.

Brian Gregory put on a performance in the Bandit Feature, dominating the 12-lap feature to claim his first win of the season. Gregory used the high line to run away from point leader Jake Bansmer, building his advantage to up to three seconds during the caution-free event before safely bringing home the win in the feature-only format for the division. Bansmer placed in second after failing to win a heat or feature race for the first time this year while Tyler Guzzardi crossed in third.

— Genesee Speedway will take this weekend off before returning to action next Saturday, July 18 for a Super 6 at 6 p.m. program. The event will be presented by Beamer’s Sales and Service. For more information visit www.Genesee-Speedway.com.