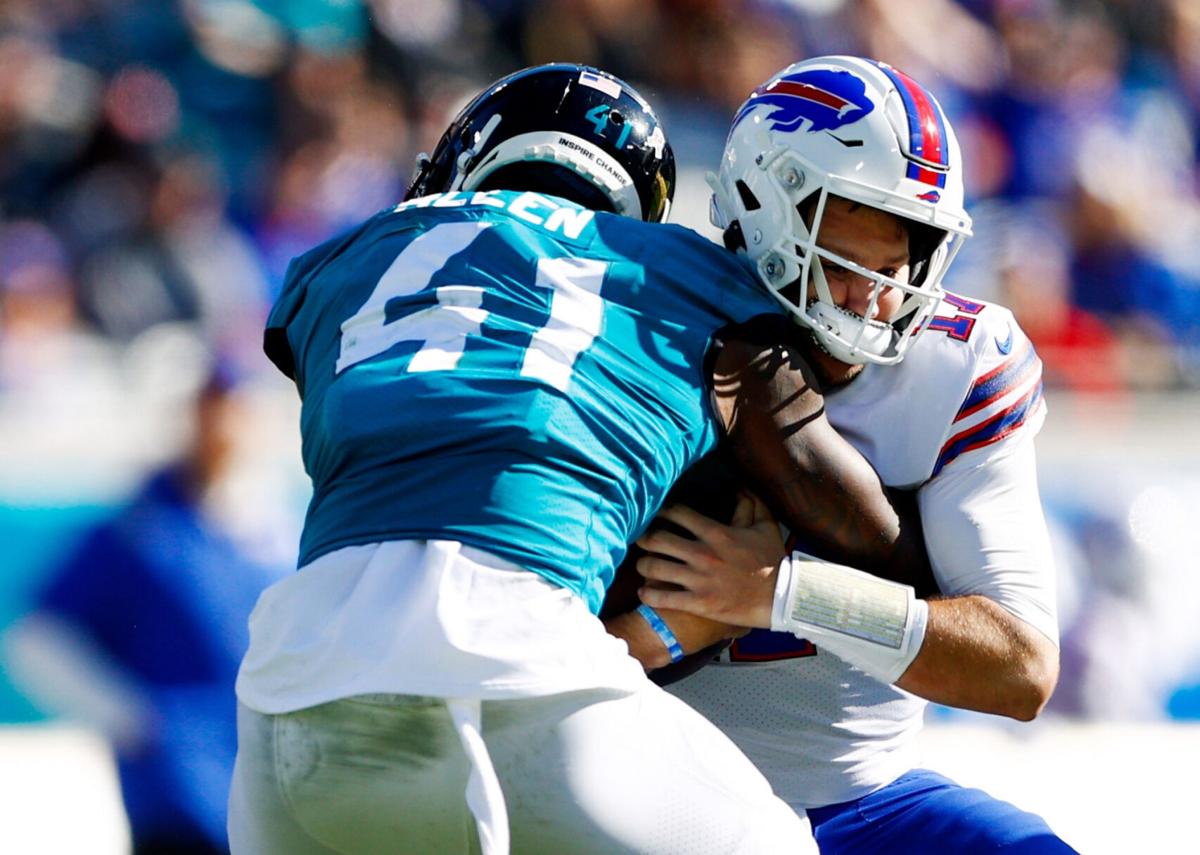 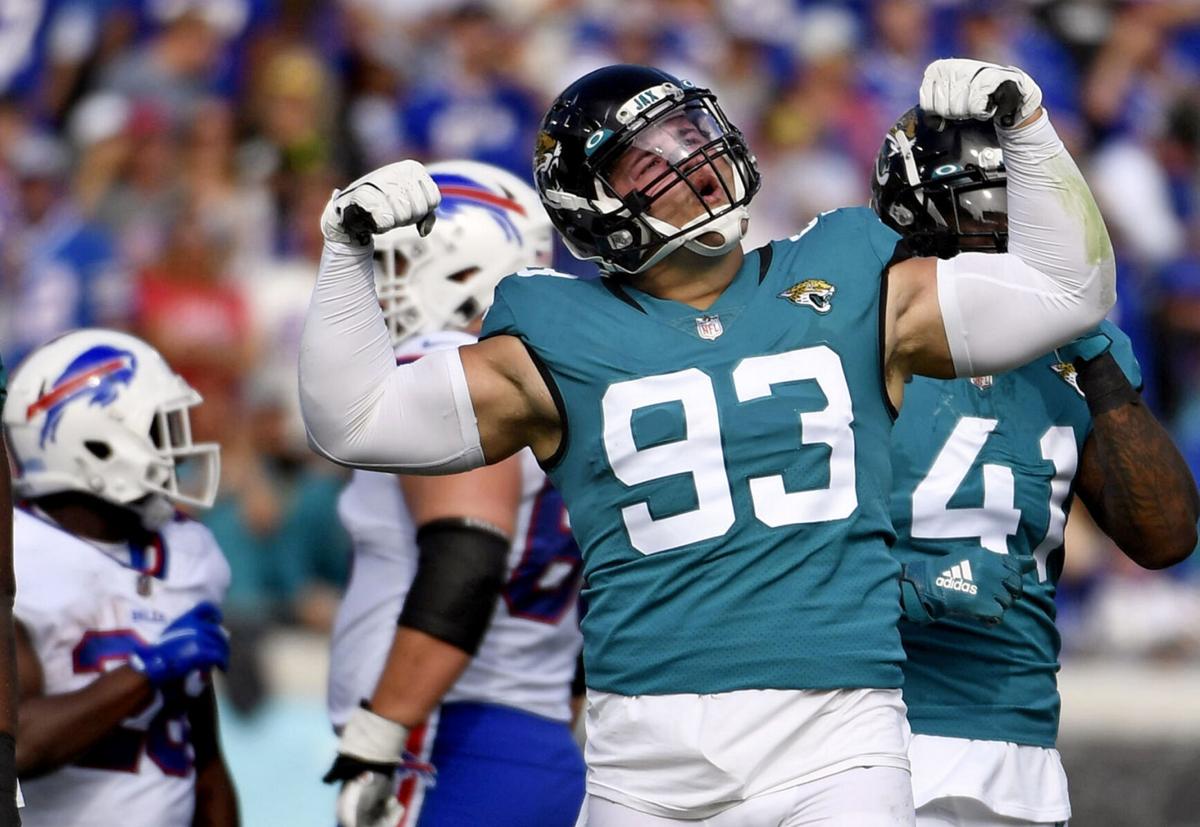 Melina Myers/USA TODAY Sports | Jacksonville Jaguars defensive lineman Taven Bryan (93) celebrates after a play during the first half against the Buffalo Bills at TIAA Bank Field.

Melina Myers/USA TODAY Sports | Jacksonville Jaguars defensive lineman Taven Bryan (93) celebrates after a play during the first half against the Buffalo Bills at TIAA Bank Field.

JACKSONVILLE, Fla. — After the Bills’ 9-6 loss to the Jacksonville Jaguars, a despondent Josh Allen sat at the podium and described his performance using an often-used four-letter word.

It was tough to argue with his synopsis, as Allen and the Bills stunk it up against the Jags, allowing what many believe to be the worst team in the NFL to earn a tight victory and hand Buffalo its third loss of the season.

Everything seemed to go wrong for the Bills (5-3) in this game, which featured three Buffalo turnovers, 12 Buffalo penalties and a few questionable coaching decisions.

In the end, this loss may not disrupt Buffalo’s ability to win the AFC East and earn a trip to the postseason. But it certainly changes the narrative surrounding a team that, prior to the loss, appeared destined to reach the Super Bowl.

Since perhaps the 2005 Week 17 loss to the Pittsburgh Steelers’ backups that ousted the Bills from playoff contention, today’s loss to Jacksonville (2-6) was the worst I can remember during my time following the Bills. For reference, I was born in 1991.

We just witnessed a defeat of epic proportion, with one of the best teams in the league falling to a historically bad team. Coming into Buffalo’s Week 9 loss to Jacksonville, the Jaguars had lost 21 of their previous 22 games. The Bills had won 16 of their past 22 games.

As Sean McDermott always says, the NFL is a week-to-week league. This week, the Bills were as bad as they’ve been during McDermott’s tenure as Bills head coach.

It was as sloppy of a game as we’ve seen the Bills play under McDermott, with penalties and turnovers telling the story during what was the Bills’ third conference loss of the season.

In total, Buffalo committed 12 penalties for a whopping 118 yards, many of which came at inopportune times. Buffalo also recorded three giveaways, all by Allen, including two interceptions and a lost fumble. Allen also came close to coughing it up in the game’s waning moments, but it appeared as if the officials had ruled his forward progress had been stopped before he lost the football.

The interceptions were the most concerning aspect of Allen’s performance, as in the face of intense pressure, the Bills QB put the ball up for grabs twice and into the waiting arms of Jaguars defenders. Until today, Allen hadn’t turned the ball over three times in a single game since the 2019 season.

Along with the questionable performance on the field, Bills head coach Sean McDermott didn’t have his best day. A decision to allow the Jaguars to kick a 55-yard field goal to tie the game at six was questionable, to say the least. Before the kick, a Jags holding penalty gave McDermott the opportunity to move Jacksonville out of field goal range to a 3rd and 15, but he declined to do so, allowing kicker Matthew Wright to come on and drill the field goal.

All around, this was not the Bills’ best day. This is a loss that may take a few weeks to forget.

The Jags defensive captain finished the game with eight tackles, two for a loss, a sack, a pass deflection, a hit on the quarterback, an interception and a fumble recovery. It was a career day for Jacksonville’s Allen, who left an impression on all those watching this afternoon.

After being drafted in the second round of the 2019 draft, Bills offensive lineman Cody Ford has seemed to regress with each opportunity he’s been given. During today’s loss to the Jaguars, Ford reached an all-time low.

The former second-round pick struggled mightily throughout his first start since being benched earlier this season. Instead of seizing a golden opportunity to thrust himself back into the competition for a starting role, Ford proved why he is no longer worthy of a roster spot. It’s time to move on from Ford as an option on the active roster.

In a way, it’s tough to single Ford out for his performance against the Jags, as the entire Bills offensive line performed poorly. But the spotlight was on Ford entering his return to the starting lineup, and he failed to deliver.

Buffalo will look to erase this game from memory as they move into a Week 10 matchup with the New York Jets.

Before today’s loss to Jacksonville, it was tough to envision the Jets remaining competitive against the Bills. But after today’s defeat, anything is possible.

As good as the Bills have been on paper this season, they have been as inconsistent as any team in the league. The highs have been high. The lows have been low.

What will next week bring?