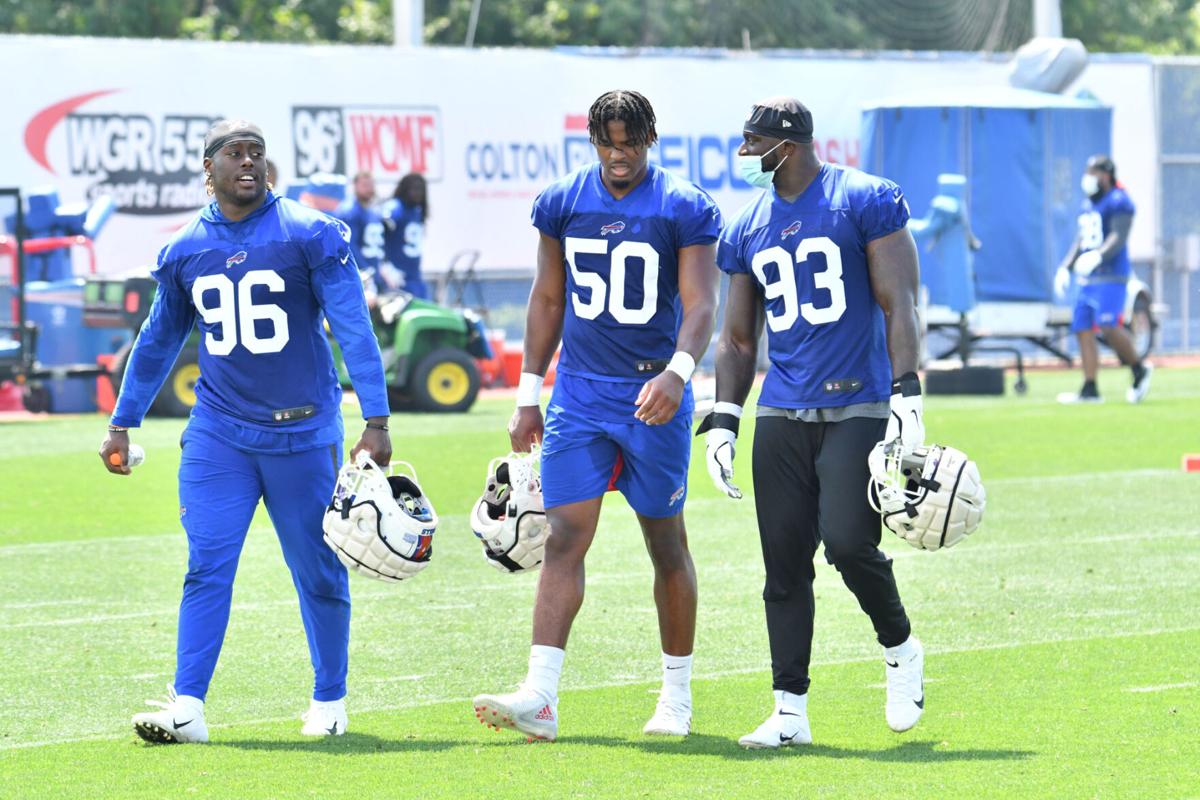 Mark Konezny/USA TODAY Sports | Defensive end Efe Obada (93) has been one of the Bills’ standouts through the first week of training camp. 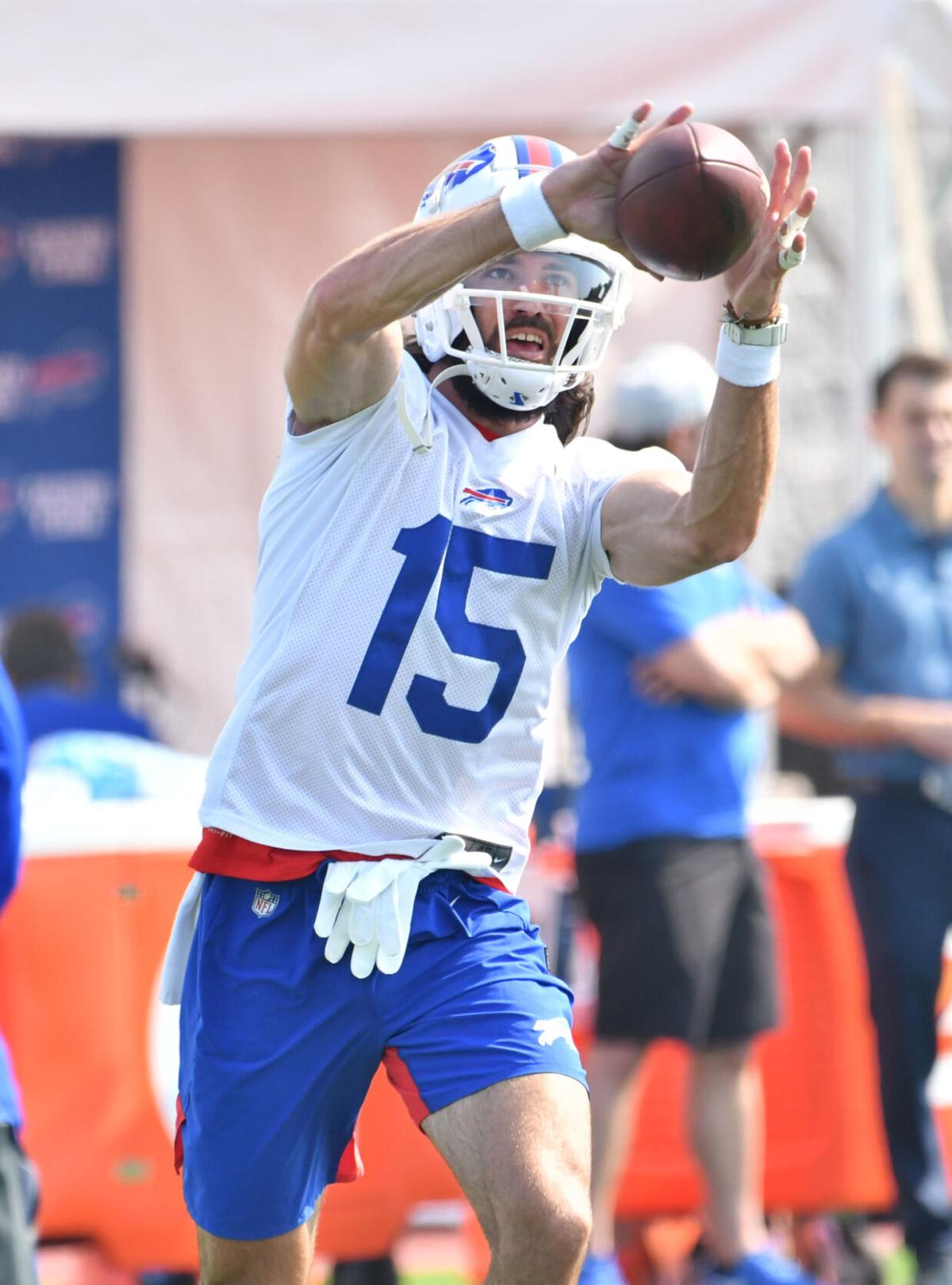 Mark Konezny/USA TODAY Sports | Defensive end Efe Obada (93) has been one of the Bills’ standouts through the first week of training camp.

Several Bills players have left an impression for their impressive or less-than-stellar performance through the team’s first week of training camp.

Like any preseason, there are bound to be numerous players who will elevate their status, although we didn’t initially expect them to make the opening day roster. There will also be those who initially seemed like roster locks that fall out of favor and finish on the wrong side of the roster bubble.

Here’s a short list of players that are trending toward cracking the 53-man roster on opening day:

As part of a crowded room, defensive end Efe Obada has reportedly been one of the most impressive edge rushers thus far during Bills training camp.

Considering all of the youth that Buffalo has at the position going into this year, Obada entered camp with a lot of work to do to make the opening day roster. But through the early days of practice, Obada’s versatility has been turning heads.

“Efe is a young, strong guy,” said Bills veteran defensive end Mario Addison. “One thing I can say about him is that he is very coachable. He is willing to learn.”

Obada signed a one-year contract with the Bills this offseason. He’s played in 42 career games with one start and recorded 5.5 sacks in Carolina last season.

Kumerow had a big day at the Bills’ open practice this past Saturday and has reportedly followed that up with a few more impressive performances since.

The former Green Bay Packer’s contributions on special teams already significantly improve his chances of making the roster. But it’s been his ability at wide receiver that has stood out during training camp.

“I think Jake’s a good football player,” said offensive coordinator Brian Daboll. “Training camp is for all this. You want to see guys that are maybe behind the top guys. You give a guy a day rest or another guy gets dinged up, and you see where those guys fall in and if they can do it. Because the more you can do, the more you can do in this business. He’s done a good job for us as a receiver, but he’s done a good job in the kicking game too.”

At Saturday’s practice, Kumerow made several tough catches in traffic and appeared to have already developed a solid connection with quarterback Josh Allen.

Kumerow is proving why future Hall of Fame QB Aaron Rodgers was singing his praises just last week. The four-year veteran returned to Buffalo on a one-year deal this offseason after appearing in six games with the Bills last season.

After his breakout performance late last season turned him into a fan favorite, defensive tackle Justin Zimmer has reportedly picked up right where he left off.

Zimmer is battling Vernon Butler and Harrison Phillips to secure his spot in the defensive line rotation, and through the first few days of training camp, he seems to have a leg up on the competition.

“(Zimmer) did a terrific job for us a season ago,” said defensive coordinator Leslie Frazier. “He epitomizes what you look for in a football player. The way he works, the way he approaches every single practice, every meeting. He’s a lunch pail-guy for us. And he’s a tough out. He’s going to battle every single snap.”

Zimmer, a six-year pro, is older than you may think at 28 years old. But as days go by, he appears more and more like a late bloomer that is beginning to find his stride at the NFL level. And, unlike Butler, who will count $7.8 million against the cap this season, Zimmer makes a minimal salary which increases his chances to crack the opening day roster.

The Bills have Zimmer under contract through the 2021 season.

During the first day of padded practice, Morris was reported to have put forth a notable afternoon.

With Hollister out and TE Tommy Sweeney still working his way back from a season-long absence prompted by myocarditis, if Morris can continue to prove to be a reliable target, he may have an outside chance of suiting up for the Bills Week 1 against the Steelers.

Morris led Bowling Green with 20 catches for 248 yards receiving during the ‘20 college season and signed a three-year contract with the Bills.

Although there was some question as to whether or not Breida would crack the opening day roster, according to reports, he appears to be a near-lock early in training camp.

Buffalo brought in the former 49ers and Dolphins running back to help provide the Bills’ offense with an added speed element, which it lacked a season ago. Early returns show Breida has been as advertised.

“He’s really quick, and he’s a vet,” said Bills’ second-year RB Zack Moss. “He has a lot of tips for us on and off the field. Just having a guy like that who’s vocal has really brought our group together a lot more.”

To begin camp, many questioned if Buffalo would bring back late-season sensation Antonio Williams or even Christian Wade as its third running back. But early on, Breida appears in line to fill that role when the regular season kicks off.

After stops in San Francisco and Miami, the five-year veteran signed a one-year contract with the Bills in the offseason.