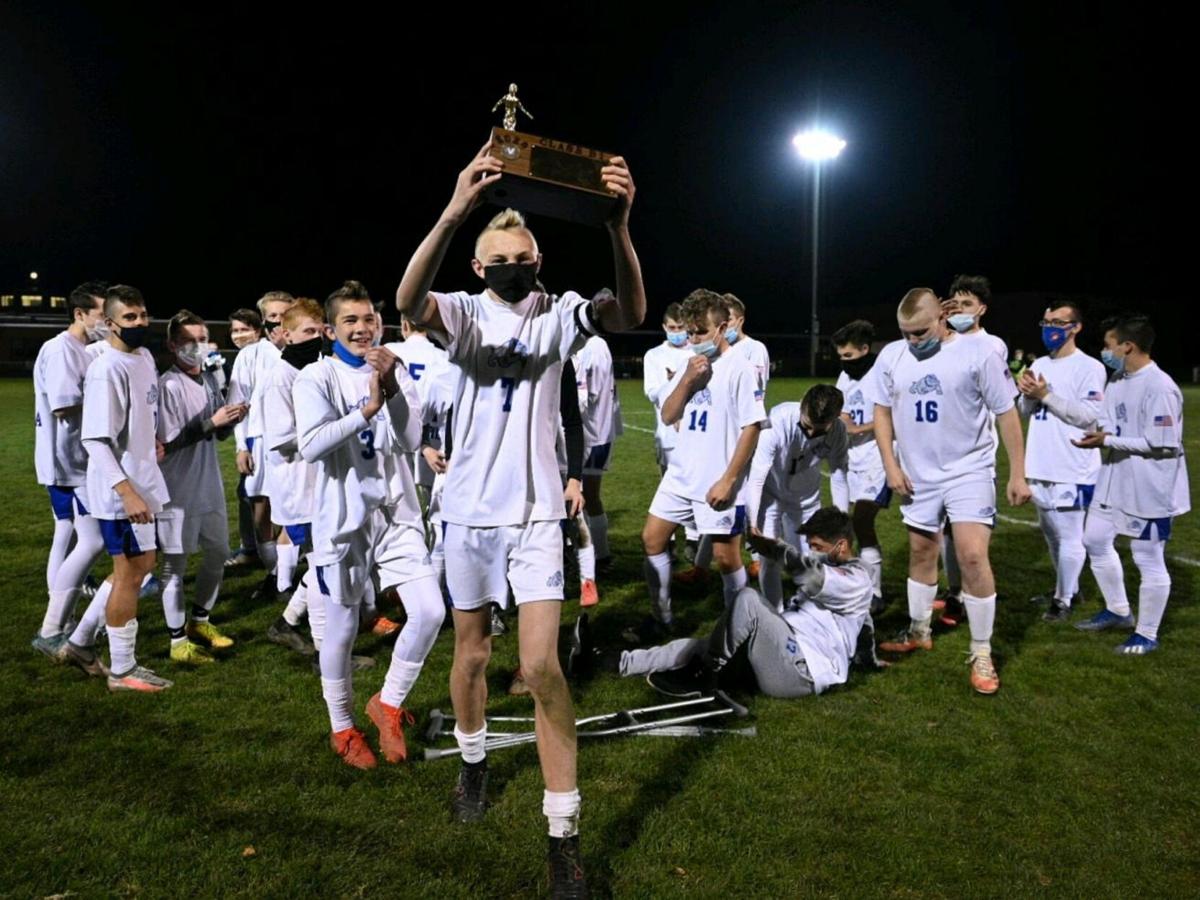 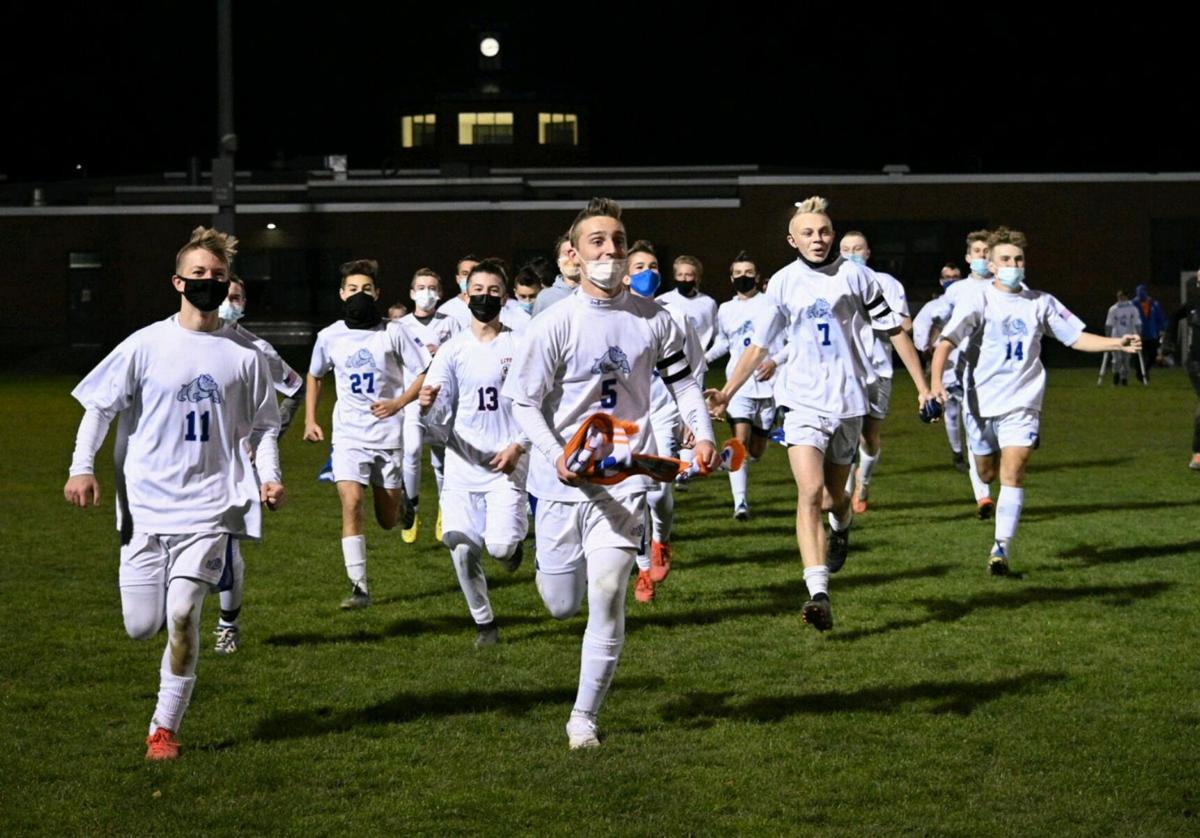 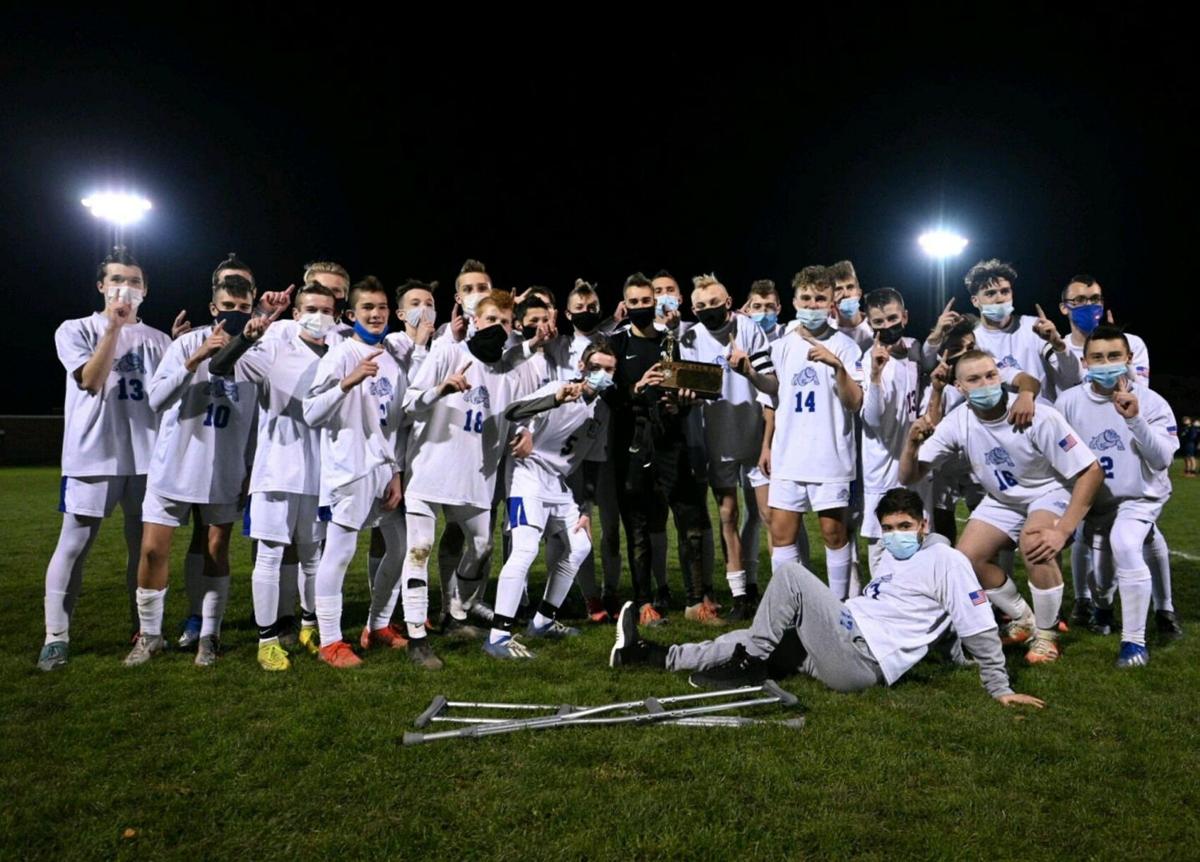 ONTARIO — When the high school soccer season finally began on Oct. 5, visiting Livonia left Wyoming County on the short end of a 1-0 score to host LetSaw.

Fast forward 45 days and that same Livonia boys soccer program had a much different ride home from Wayne High School as the Bulldogs took home the Section V Class B1 block following their thrilling 3-2 victory over the No. 1 seeded Eagles Thursday night.

And what a game it was, and it featured a tale of two halves.

First half goals by senior Shawn Minnehan and sophomore Jackson McEnerney had Livonia out to a dominating 2-0 lead after the first half.

Minnehan’s ice breaking goal came off a corner kick that found Minnehan’s right foot for the far post tally that made it 1-0.

Livonia’s second goal was a thing of beauty following a midfield direct kick by the Bulldogs that found the box and after a scramble came back to a hustling Jack Donnelly who slid a perfect pass to the top of the box where McEnerney struck it perfect into the top right 90 for the goal and a 2-0 lead.

Livonia threatened a few more times before the first half ended and a 2-0 lead could have been 4-0 with a few bounces here or there.

Wayne, who came into Thursday’s contest with just one loss — a 1-0 setback to Class AA rep McQuaid, was the heavy favorite entering the finals, outscoring opponents 50-4, including their 2-1 victory over LCAA rep Hornell in Tuesday’s semifinals.

Trailing by two goals at the break, the Eagles were not going away anytime soon and came out in the second half with fire in their eyes and by the 20:00 remaining mask break time out, had scored a pair of goals to tie the game up at 2-2 and more importantly taken back all the momentum that Livonia once had.

Myers, Livonia’s senior keeper, would come up with a pair of incredible back-to-back saves, one of which head coach Ray Maxwell described as “world class,” including a point blank diving stop from 10 feet and another one following a perfectly placed corner kick, would keep the score tied at 2.

Hoang, a junior, would receive his biggest moment of the season on the ensuing offensive possession when he took a long throw-in near midfield from Ewan Maxwell that found its way to a hustling Hoang who struck a left-footed rocket from 25 yards away from the deep left wing that sailed into the top right corner for the impressive goal that put Livonia up 3-2.

It was Hoang’s 10th goal of the year.

The saves by Myers and goal by Hoang could not have come at a bigger moment in the game and pumped some life back into the Bulldogs.

Livonia would protect their one goal lead in the final minutes as Wayne threw everything they could the Bulldogs way, sending several extra players into offensive possession.

But Donnelly, Brady Bishop and other Bulldog defenders would fend away any Wayne offensive attempts to preserve the victory on another sectional block that was headed back to Bulldog Blvd.

Coach Maxwell was proud of his team on how far they had come in the past 45 days.

“It was a daunting task playing the top seed at their place,” coach Maxwell said. “We played a good first half and poor second half. We needed a bit of magic and got it from Bryce Hoang and Brenden Myers.”

The victory was coach Maxwell’s 505th career win and allowed him the celebration he’s always wanted — with son Ewan, who will graduate this June.

“It was extra special to celebrate Ewan’s last high school game with a sectional title,” Maxwell said. “I was very proud of his leadership tonight.”