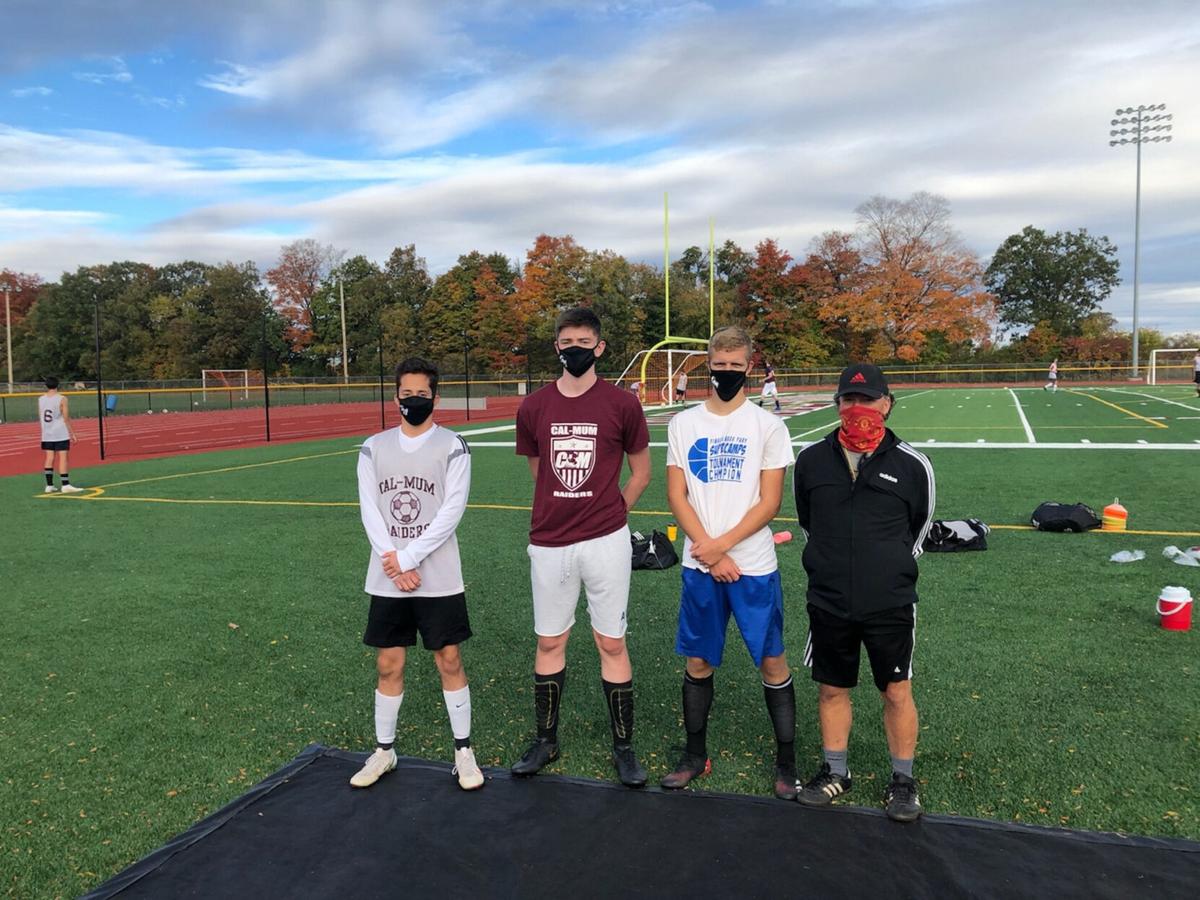 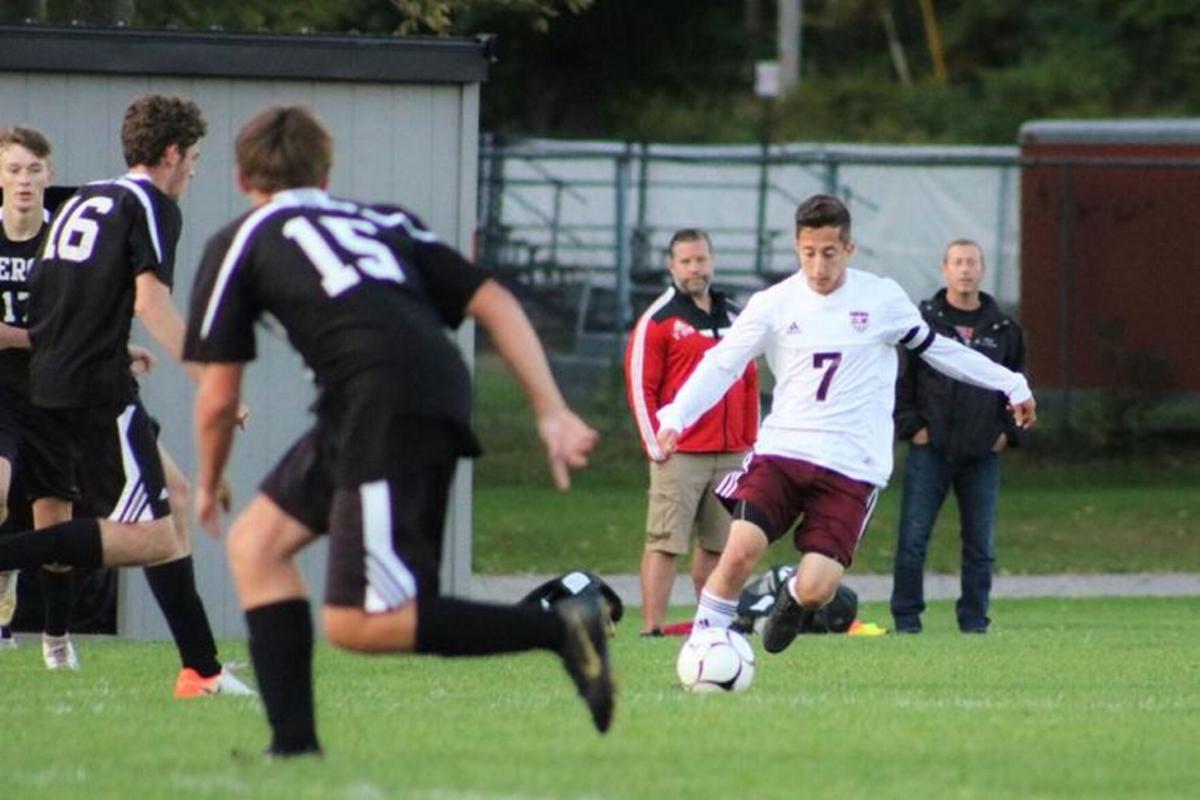 File photoSebastian Kresge, playing against Le Roy last season, is off to a great start with three goals and three assists in 2020. 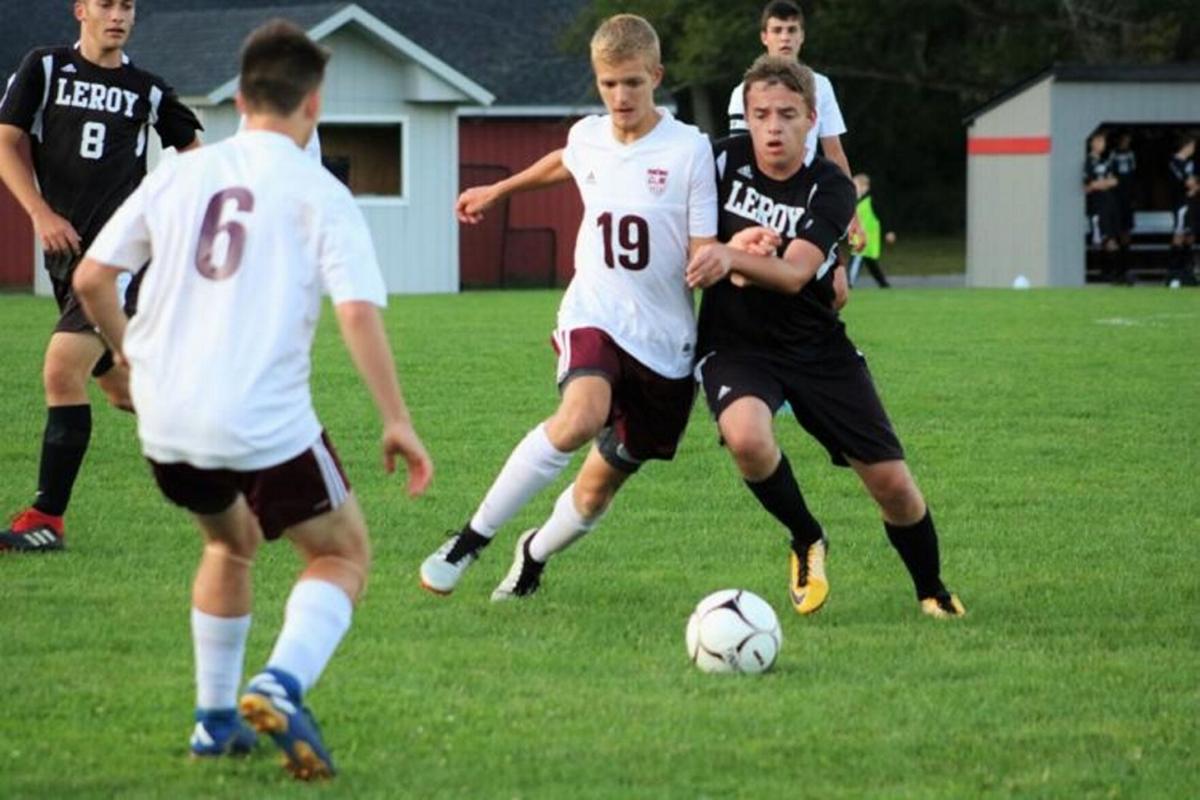 File photoSebastian Kresge, playing against Le Roy last season, is off to a great start with three goals and three assists in 2020.

CALEDONIA — Being a boys soccer player at Caledonia-Mumford, even a talented one, has to be a somewhat thankless and overshadowed position to be in.

When people talk about Cal-Mum, the words are often about the football team’s Section V record-tying 15 sectional titles, plethora of state championships, numerous players who have gone on to play in college or the glory years of legendary head coach Mike Monacelli. Even though the Red Raiders have only won two blocks in the last 15 years, when someone says Cal-Mum, the majority think immediately of football.

Deservedly so, the football team gets plenty of notoriety, but there are other programs in the fall that also take the field. And while teams such as the boys soccer program have struggled to gain the level of success of the football team, they are still there.

With no action on the gridiron in 2020, things may have changed for longtime head coach David Veltre and the Red Raiders, whether it is a coincidence or not.

For the first time in recent memory, the Red Raiders are off to a 4-0 start and they are enjoying every minute of it.

“The intensity has been unbelievable, the preparation, the teamwork, everything has really been on par,” Veltre, who is in his 22nd season at the helm, said. “These guys work hard, they want it; their passing game is up, their shooting game is up and they just really want it. The other thing is that there isn’t much going on. There is the girls team and the cross country team and they look around and that’s it. They enjoy that and they feel kind of privileged and grateful so they just give it their all out here.”

Obviously, things have certainly been a little different, other than the early-season success.

Instead of beginning with practices in late August, New York State teams were forced to wait until September 21 to begin their seasons. There are mask guidelines, social distancing guidelines, plenty of other guidelines and a condensed schedule, which have all made the beginning of the season unique.

And having a condensed schedule in the tough Livingston Conference has made Cal-Mum’s start even a little sweeter.

“It’s definitely interesting because we’ve never had a season like this. I’m just happy that we’re able to play my senior year,” said Sebastian Kresge. “We’re just not a young team anymore and our chemistry has been really good. We’ve been working really hard and we’ve been able to find the back of the net. We just have to take it one game at a time and we work hard in every practice and every game.”

At least for three games, that hard work has paid off.

The Red Raiders have surrendered just one goal over their first three games — wins over Perry, Pavilion/York and Geneseo — while they have also averaged three goals per game, scoring three in each contest.

However, the group is definitely not getting ahead of themselves because they know that there is still nearly a month of the regular season yet to go.

“Through everything these guys have just focused on the game of soccer and that’s what it’s really all about,” Veltre said of the circumstances of playing during COVID. “And they’ve come out and been able to be successful. Yeah, we’ve won three games but these guys aren’t looking at that. They are looking to the next game.”

Kresge has been off to a blistering start, already having scored three times and handed out three assists to pace the solid offensive effort. Yet it’s been quite the balanced effort throughout.

Five different players have found the back of the net, with Mason Nusbickel and Evan Raniwicz each scoring twice, while the defense has been top notch in front of goalkeeper Nate Howard.

“It’s kind of upsetting that we can’t really have any of our friends there or many fans but it’s nice being the top team in the school for once,” Nusbickel said. “We just have to come with the same intensity in the games and in practices. In the games we’ve really be in the zone so I think we just have to keep that going.”

Through the opening weeks of the season, Howard has been one of the top goalkeepers in the LCAA. The senior has allowed just one goal, while notching a total of 11 saves in the three relatively easy wins.

With a very winnable game Thursday against 0-3 Mount Morris, Cal-Mum could very easily be 4-0 heading into a tougher portion of their schedule that will include Keshequa and Avon.

To Howard, there really hasn’t been a huge secret to the team’s early success.

“It feels great. We play with a great group of guys and we’ve also been playing together since we were like 12 so we really know each other, we know how to play with each other and we know each others strengths and weaknesses,” Howard said. “It’s good to know who you are playing with and that we can keep this success going forward.”

For Veltre, it’s much of the same, as this team has a closeness about it that doesn’t come around every season.

“They are very accountable,” Veltre said. “We really know that if the ball goes in our net it’s not one guy’s fault, it’s the whole team’s fault, or if we score, the same thing. That’s really where they’re at right now. They are very team-oriented and very supportive of each other.”

Unlike the ultra-successful (at least historically) football program, the soccer program hasn’t seen much success in the past. The Red Raiders have never won a Section V title, while advancing to the Class C2 semifinals in 2017 was the farthest that the team has advanced in the postseason in the last 10 years.

The majority of the past decade has seen Cal-Mum ousted in the opening round of the sectional tournament, but that is nothing that this year’s group is focusing on.

“It’s just been playing together. Either practicing or in the games we’ve really been talking to each other and everyone is really on the same page,” Alex Hallet said. “We just can’t look in the past. It’s a new year and we just need to keep moving on and look to the future and what this team brings.”

As for this season and the possibilities that may lie ahead? Those thoughts only last as far as Thursday’s game at home against Mount Morris.

“They focus on one game at a time and they need to believe in themselves, on and off the field,” Veltre said. “Every effort they bring here at practice they have to bring to the game, and they really do believe in themselves. We try not to think of the outside stuff. They are really focused. It’s only been three games but that’s been a key to their success.”

Garrett Thompson and Zachary Kuhn each scored first half goals to put the Red Raiders up 2-0 at the half.

Both goals were assisted by Mason Nusbickel.

With a game looming with Keshequa (5-0) on Saturday, the Red Raiders currently sit just two points behind the Indians in the LCAA Division II standings.