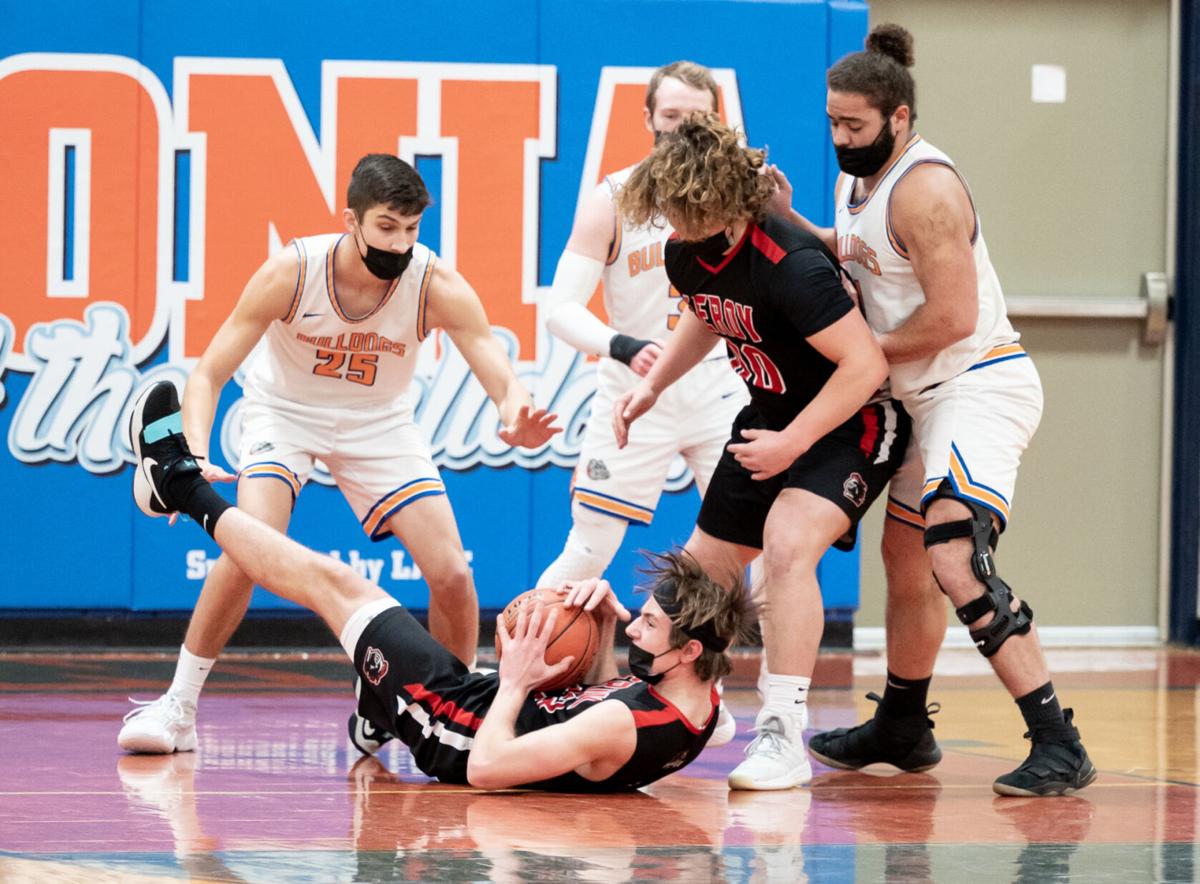 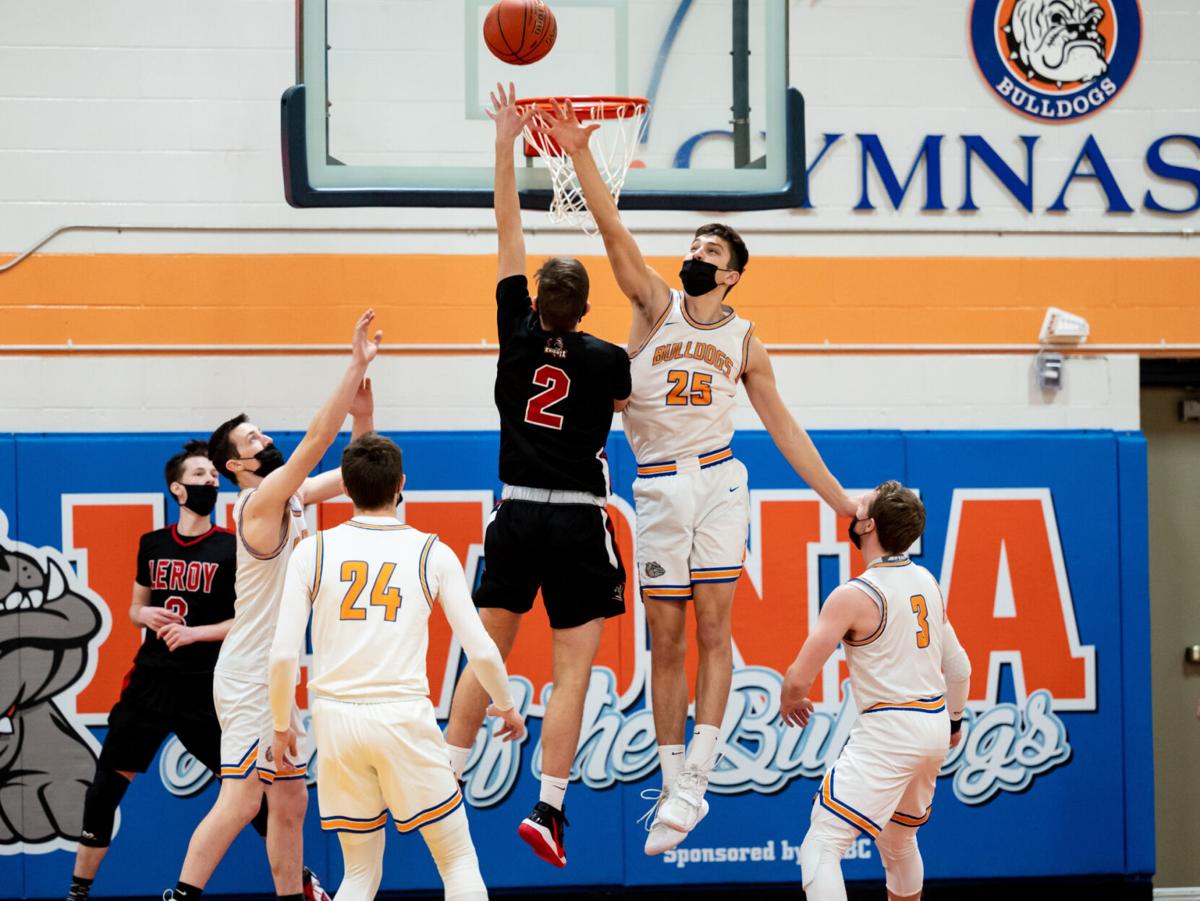 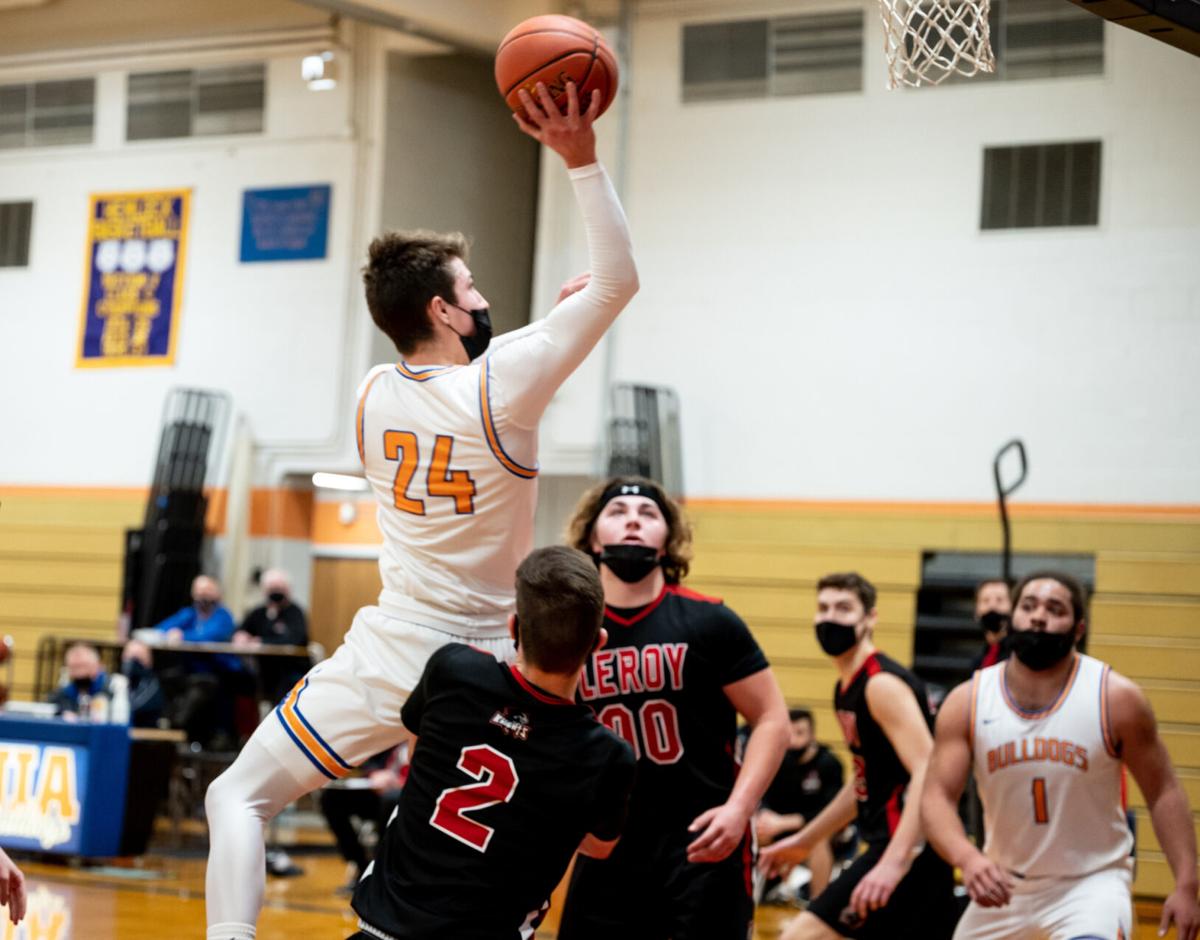 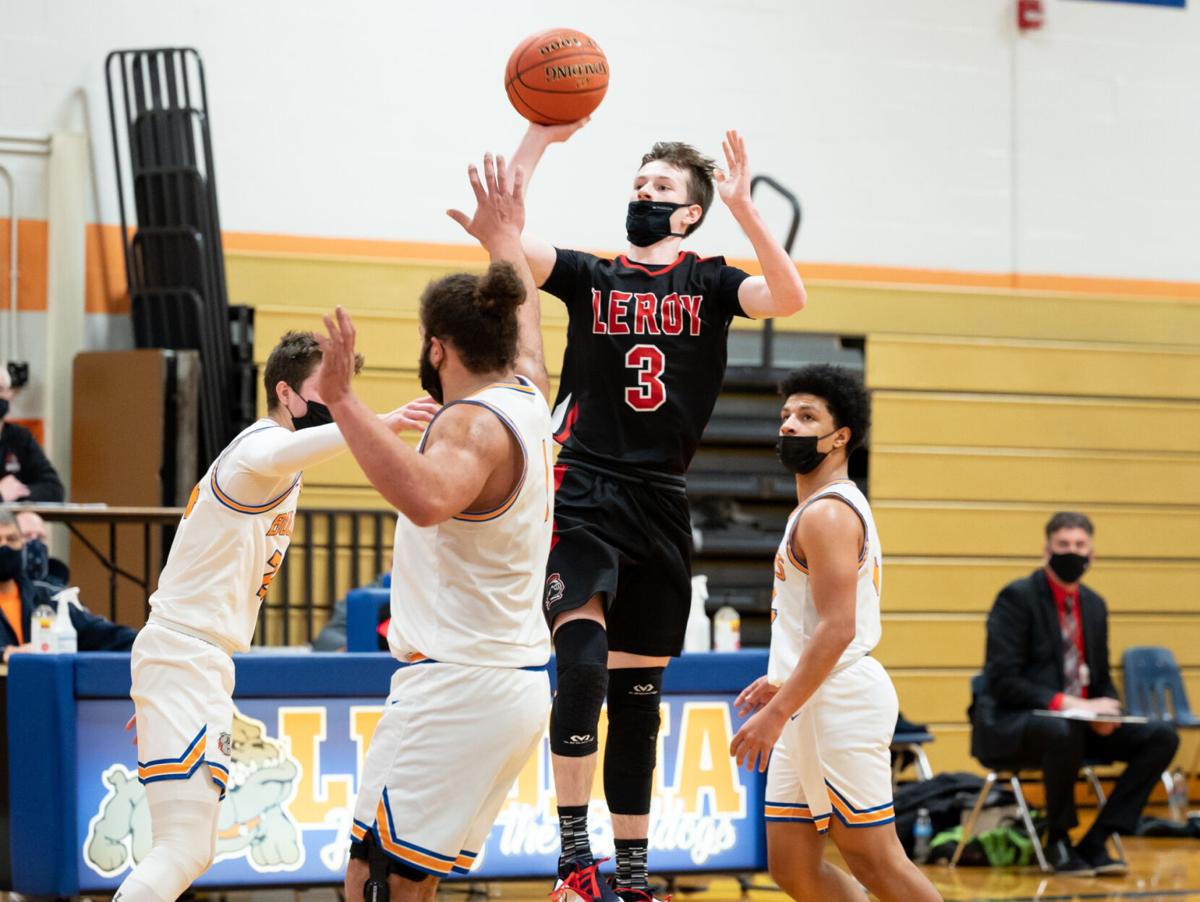 LIVONIA — It wasn’t easy for Livonia head coach Matt Young’s bunch on Friday night against league rival Le Roy, but in the end, behind 23 points from senior Alex Minnehan, the Bulldogs worked their way to a 49-46 win to improve to 8-0.

“Three games a week is tough for everyone,” said Livonia head coach Matt Young. “LeRoy is a tough matchup for us with their length and athleticism. Our legs seemed tired tonight with our shots falling short, but every team might be going through the same type of scenario.”

Livonia led by nine at halftime, but Le Roy came out of the break red-hot and entered the fourth quarter trailing by just one. To begin the third quarter, an attempted alley-oop from Le Roy resulted in a technical foul and common foul, which quickly cut the Knights’ deficit to five. Le Roy junior Mitchel Hockey then hit two three-pointers in the frame to help cut the Bulldogs’ advantage to just one heading into the fourth.

Ahead 48-45 with 3.9 seconds remaining, Livonia fouled Hockey which sent him to the line for two shots. The Knights’ junior made the first and attempted to miss the second intentionally but missed the rim and was whistled for a violation. Livonia took over possession and sealed the deal with a free throw and then a steal on the ensuing Le Roy inbound pass.

“We’ll take this win,” said Young. “But we know we have to improve.”

Hockey led Le Roy with 22 points, including three three-pointers. He also finished 7-of-9 from the free-throw line. Seniors Andrew Loftus and Cody Lytle added 12 and 10 points, respectively, for the Knights.

With the loss, Le Roy is now 4-3 and looks ahead to a road matchup with Hornell on Tuesday. Livonia will play Dansville the same night.

“This year, we’ve been telling our guys that it’s a sprint, not a marathon,” said Young. “You have to bring your ‘A’ game every night.”

The Golden Knights got off to a great start, outscoring the Blue Devils 29-14 in the first quarter and ran away with the near 30-point victory. Freshman Jake Pangrazio led York with 27 points, including seven three-pointers, senior David Cuozzo added 18 points and senior James Kennedy chipped in 10 points for the Knights.

Senior Riley Kowasz scored 18 points for the Yellow Jackets as they made their way to 2-5. Senior Caleb Carr added 14 points for Perry.

“It was a tough-fought road win,” said Perry head coach Anthony Macaluso. “It was a great team effort.”

The Mustangs won their third straight game behind 19 points and 15 rebounds from star junior Drew Morrow.

“This team continues to show me that they have a lot of heart and a lot of grit,” said Dansville head coach Dave Moodie.

Dansville trailed by eight at the end of the third quarter but outscored the Rams 15-4 in the fourth quarter to earn the comeback win.

“We didn’t shoot the ball well in the first three quarters. But when it was time to flip the switch in the fourth quarter, guys stepped up,” said Moodie. “Very proud of their effort and their accomplishments so far.”

A hard-fought effort from the Golden Gophers ran out of gas in the fourth quarter, as they fell to the Blue Devils by 13.

“Give all the credit to Geneseo as they just continued to come at us play after play,” said Pavilion head coach Jack Jeffres.

Senior Adam Wright paced the Blue Devils with 22 points, sinking 10-of-11 free throws on his way to a big night. Senior Cole Tillotson led Pavilion with 17 points to go with four assists. Senior Trevor Wiedrich put forth an all-around effort for the Gophers, finishing with 15 points, 10 rebounds and seven blocks.