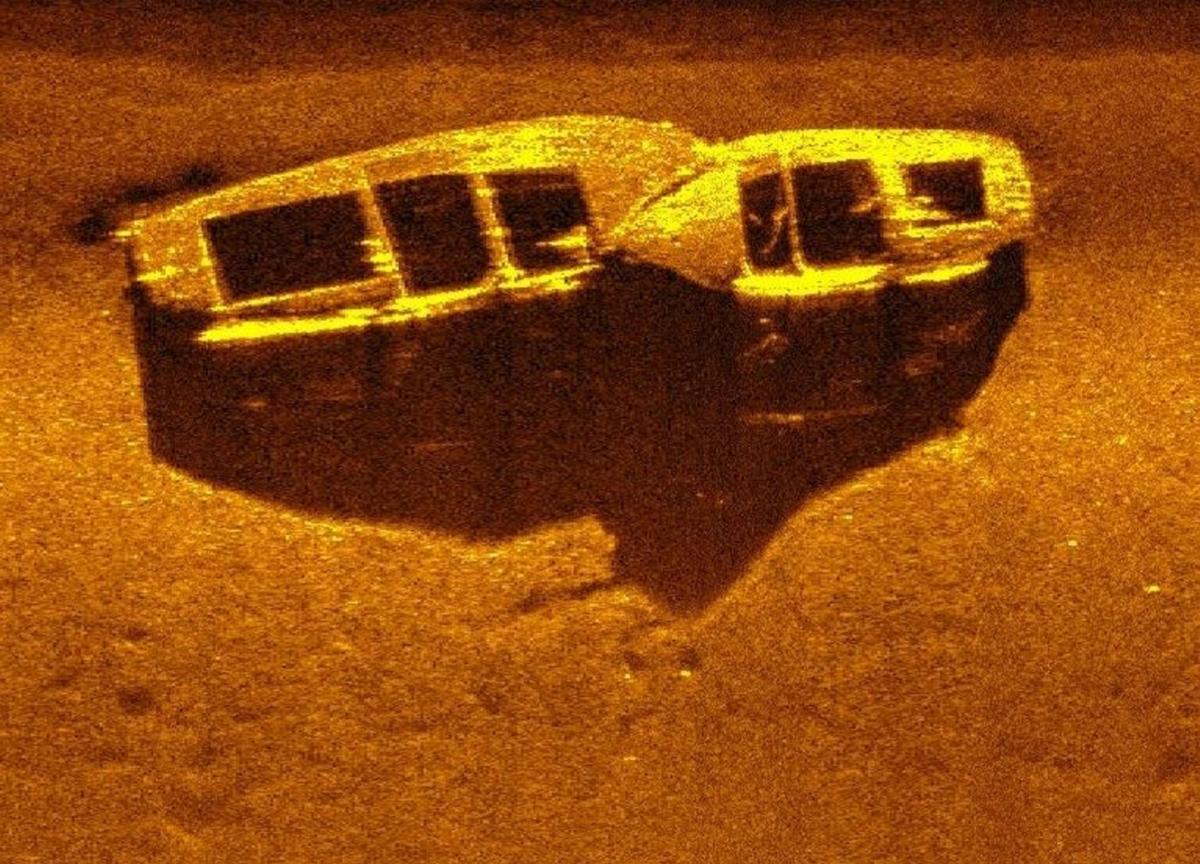 Photo courtesy of Livingston County Sheriff’s Office Sunken wreck. A sonar image of two Chris Craft boats that sunk after colliding head on with each other on the east side of Conesus Lake in July 1945. 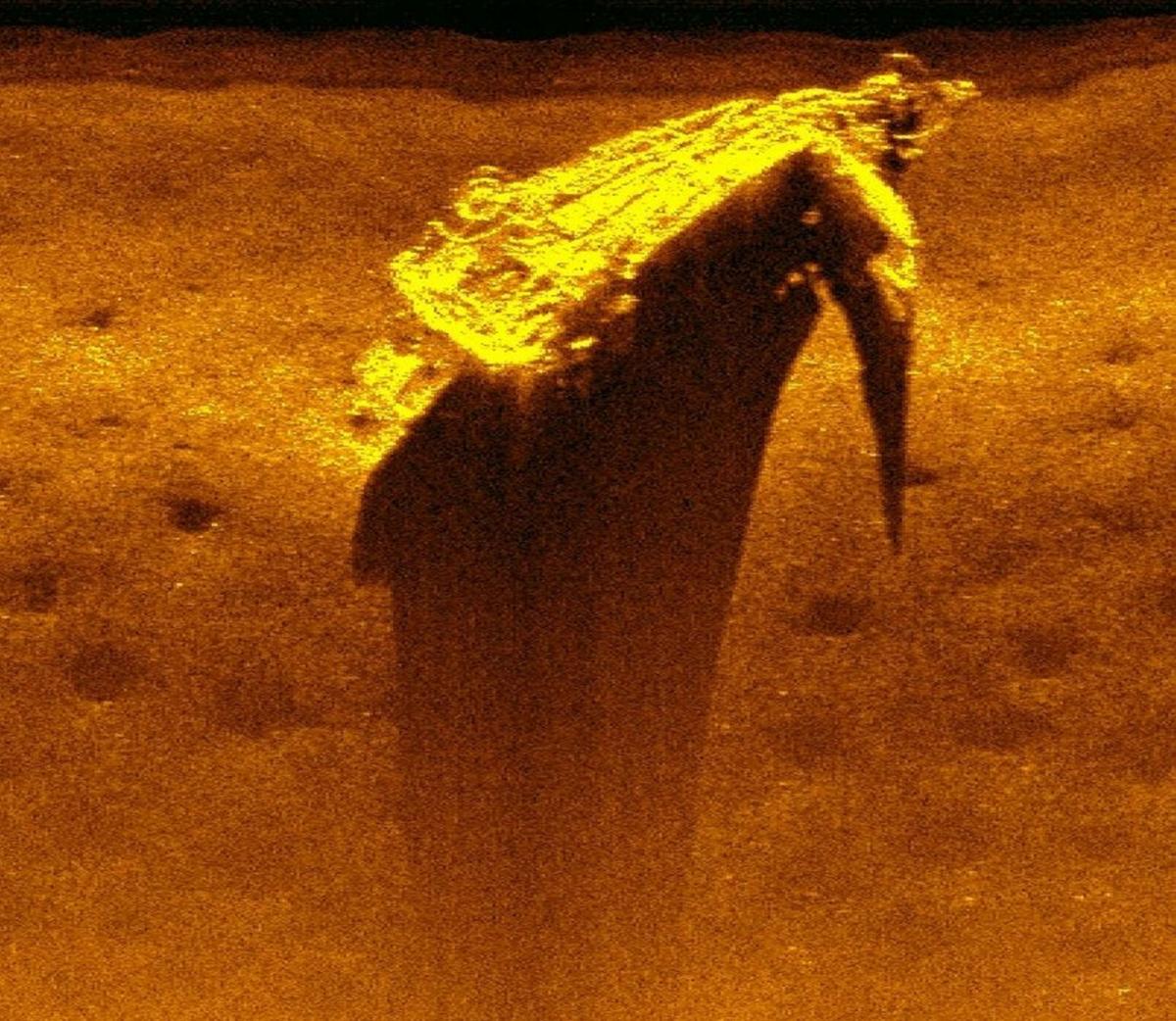 Photo courtesy of Livingston County Sheriff’s Office A sonar image of a former hearse that was used as an ambulance and in 1962 found its way to the bottom of Conesus Lake.

Photo courtesy of Livingston County Sheriff’s Office Sunken wreck. A sonar image of two Chris Craft boats that sunk after colliding head on with each other on the east side of Conesus Lake in July 1945.

Photo courtesy of Livingston County Sheriff’s Office A sonar image of a former hearse that was used as an ambulance and in 1962 found its way to the bottom of Conesus Lake.

As the warm months of summer draw people to participate in all manner of activity on Conesus Lake, the subject of what lurks below its surface will certainly find its way into many a conversation.

A catalyst to many of these conversations is likely to be the story of the propeller, which now sits at the entrance to Vitale Park in Lakeville, that once belonged to the McPherson/Starrucca Steamboat.

The story of the largest boat to ever grace Conesus Lake, and its untimely demise, is one of many that’s well-known in the area. Other stories and conjecture about what rests on the bottom of Conesus abound, though many are unverified,

Thanks to advancing technology in the hands of the Livingston County Sheriff’s Office, some of those questions are starting to be answered. Two years ago, the Sheriff’s Office acquired its own highly technical marine sidescan sonar equipment for use in cases relating to submersed objects.

The Sheriff’s Office Underwater Search and Recover Team’s divers claim visibility is almost non-existent in many areas of the lake. Members say they are often forced to rely only on feel and the information the new sonar system provides to locate objects before they dive into low visibility areas.

After a case involving the drowning of a youth at the gravel pit in Avon in 1968, Deputy Clark Young and Deputy Wesley Van Gee, under the leadership of Sheriff Martin Gilbride, founded the Sheriff’s Scuba Team. The team is now referred to as the Underwater Search and Recovery Team or USRT.

But it was the case of the two boys who disappeared near the south end of Conesus Lake in 1991 that first made use of early marine sonar technology on loan from Connecticut State Police.

In a joint effort with the New York State Police, Sheriff’s deputies and search and rescue volunteers came together in an attempt to find the two missing boys.

Another large search effort was again attempted by the Sheriff’s Office in 1995 to find the two teenage boys, who were assumed drowned, after a shoe containing bones was found on the shore. The latter search was ultimately unsuccessful.

The sidescan sonar technology became a new tool for the USRT and was being perfected by Karl Bloom, then a member of the State Police. In 2015, Bloom joined the Sheriff’s Office as a deputy assigned to Marine Patrol. Bloom is also a member of the newly created SONAR Unit, which is comprised of five specially trained deputies and assists the USRT with searches in open bodies of water.

Recent use of the SONAR Unit’s sidescan equipment has helped shed light on what secrets the lake’s waters conceal. The first confirmation was about a story of a hearse at the bottom of the lake.

In May 2016, the Livingston County News ran a story my wife and I wrote about a “hearse” that went through the ice and came to rest at the bottom of the lake. Told to us by former Geneseo resident Jim Culbertson, the story was vindicated when Sheriff deputies verified its location and captured it in a marine sonar picture last summer.

After deputies discovered the sunken ambulance, now Deputy Clark Young asked Lore if she knew anything about an accident involving two Chris Craft boats on the east side of the lake. During the search for the two missing boys in 1991, the collaborative search team discovered the wreckage of two Chris Craft boats that had sunk, apparently together, after a head-on collision with each other. With no small amount of research, Lore was able to confirm the accident occurred in July 1945 and the two crafts were owned by Charles Jones of Caledonia, formerly from Le Roy. Jones and his wife had a cottage at Sutton Point near the Myrtle Richardson family cottage. After hearing the cries for help, Conesus Lake cottagers on the east side joined together to rescue the victims. Livingston County Leader on July 11, 1945 reported:

“Two Chris-Crafts owned by Charles Jones of the Sunny Sol Company of Caledonia collided in Conesus Lake Monday morning at 3:45 o’clock capsizing all the occupants in to the lake. Both boats sank.

“Gene Longfellow and Arthur Kelland (sp Kellond) of Avon were in one boat. In the other boat were Mr. and Mrs Jones who have a summer home on the lake, and Clayton Stapley of Avon. The accident occurred about one mile from the head of the lake.

“Residents at the lake heard the cries and a rescue party was formed by Carl Schacht, Fred Gray of Rochester and James Luciano a detective of the Rochester police department who went in boats and brought all safely to the Gray cottage. Dr. Hamilton of Hemlock was called and gave first aid assisted by Miss Jean Fiester, a graduate nurse and guest of Mr. and Mrs. John Augus at their cottage. Mr. and Mrs. Augus gave assistance in caring for the unfortunate people after they were brought to shore.

The following summer, Walter Carron of Rochester requested help to salvage the two 16-foot Chris Craft boats, according to the Avon Herald News, but deputies have since confirmed it was unsuccessful.

Lore also found a short note in the Conesus Laker that Charles Jones had purchased a Chris Craft in 1942 from Colonel (Phantom Indian) Tooey, who had a Chris Craft dealership on West Lake Road a mile south of Long Point. Interestingly, the Sheriff’s Office’s SONAR Unit have confirmed one of the Chris Craft boats is a 16 footer, but the other one is 17.5 feet.