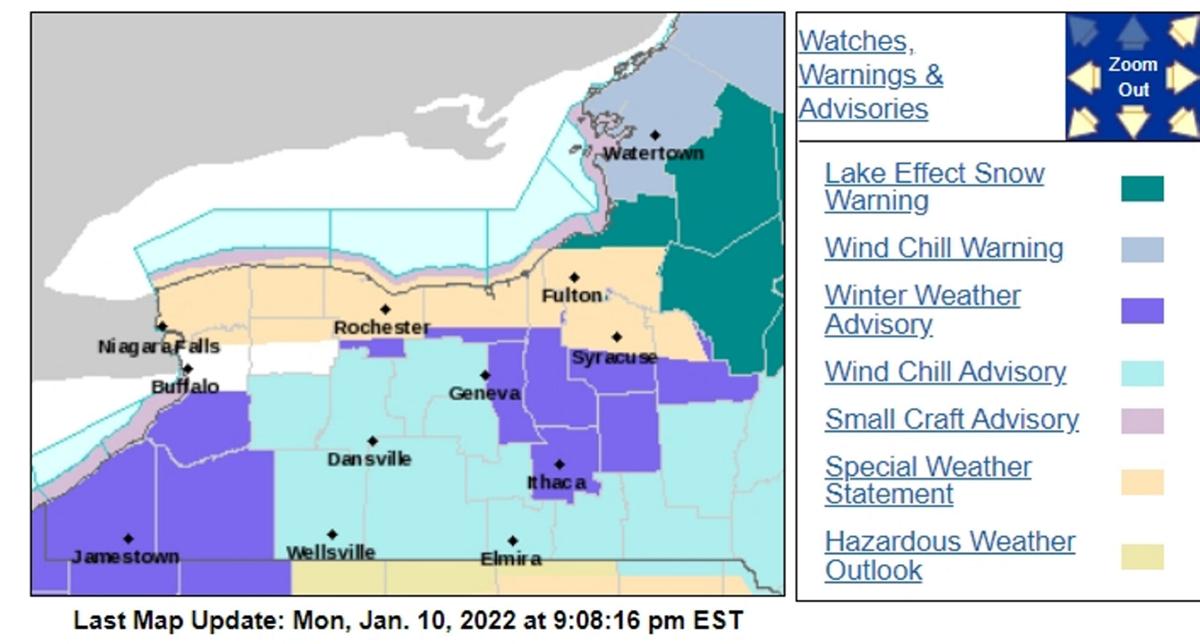 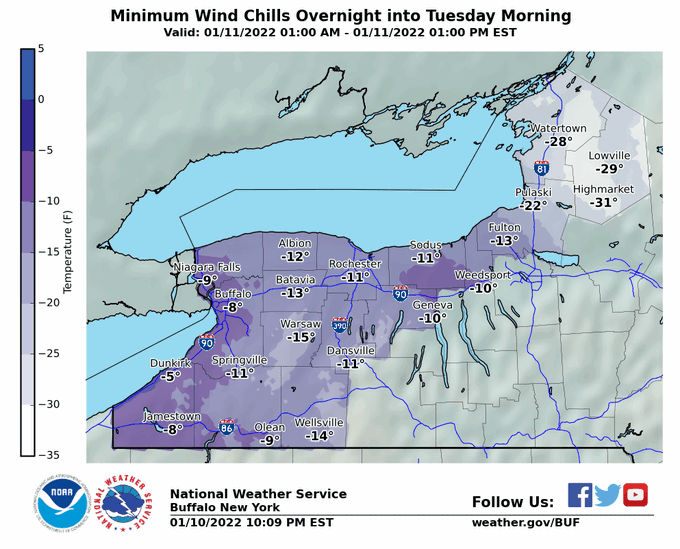 An arctic cold front pushing south from Canada will set the stage for some bitter cold weather late tonight through Tuesday.

The National Weather Service has issued a wind chill advisory that will be in effect from 1 to 10 a.m. Tuesday in Livingston and Wyoming counties.

The advisory also includes Ontario and Allegany counties. A separate advisory will be in effect for Steuben County.

Very cold wind chills - as low as 15 degrees below zero - and expected, the Weather Service said.

The cold wind chills could cause frostbite on exposed skin in as little as 30 minutes.

This is a potentially dangerous situation to be outdoors. If you must be outside, be sure to cover all exposed skin. Frostbite can occur in 30 minutes or less with apparent temperatures of 15 below zero or colder, the Weather Service said.

The best way to avoid frostbite is to stay inside, while drinking lots of fluids to increase the volume of your body’s blood. Frostbite is more likely to affect individuals with poor circulation or who are not properly dressed for the weather, according to the Centers for Disease Control and Prevention.

Until you can get indoors, don’t massage or rub frostbitten areas, drink warm liquids, put on extra layers, and remove anything tight such as rings and watches.

Indoor first aid requires the victim getting in a warm (not hot) bath and using warm towels to wrap the face and ears. Any contact with hot items, like heating pads or other heaters, could burn the victim before feeling returns.

Frostbitten skin can often cause blistering and swelling. If the blisters become blue or grey and the skin is alarmingly swollen or numb, get the victim to a hospital immediately.

Hypothermia, a condition marked by a dangerously low body temperature, is another serious cold-weather threat.

Individuals at increased risk for hypothermia include older adults with insufficient heat, clothing or food; babies sleeping in cold rooms; people who are outdoors for extended periods of time such as the homeless, hikers or hunters; and people who are drinking alcohol or using drugs, according to the CDC.

Make sure to dress properly if you are planning to be outdoors during this time.

If you’ll be going outside to shovel or for other activities, stay bundled up in layers of clothing, a hat, gloves, and insulated boots (preferably waterproof). Mittens are known to be better than gloves, but the goal is to be as covered up as possible.

A winter weather advisory is in effect until 1 p.m. Tuesday for Monroe and Wayne counties.

Lake effect snow is expected, with total snow accumulations of 4 to 7 inches in the most persistent lake snows. Winds gusting as high as 35 mph will produce blowing and drifting snow, the Weather Service said.

Plan on snow covered and slippery road conditions with poor visibility at times.

Lake effect snow will fall in relatively narrow bands. If traveling, be prepared for rapidly changing road conditions and visibilities.

A winter weather advisory remains in effect until 4 a.m. Tuesday for Orleans and Niagara counties.

Total snow accumulations of 3 to 5 inches are forecast in the most persistent lake snows. Winds gusting as high as 35 mph will produce blowing and drifting snow, the Weather Service said.

Plan on snow covered and slippery road conditions at times with poor visibility.

The entire region could see sow tonight as a large band of snow will cross a large portion of the Thruway from Buffalo to Syracuse with poor travel conditions, the Weather Service said.

Among locations to be affected are the Buffalo metro area, Greater Rochester area, Batavia, Lima, Canandaigua, Newark and Cato. This includes Interstate 390, Interstate 490 and Interstate 590 in Rochester, and Interstate 90 between exits 54 and 40.

Conditions can deteriorate rapidly in winter weather situations. Be prepared for snow covered roads and very poor visibility. Slow down and allow extra time to reach your destination, reminds the Weather Service.