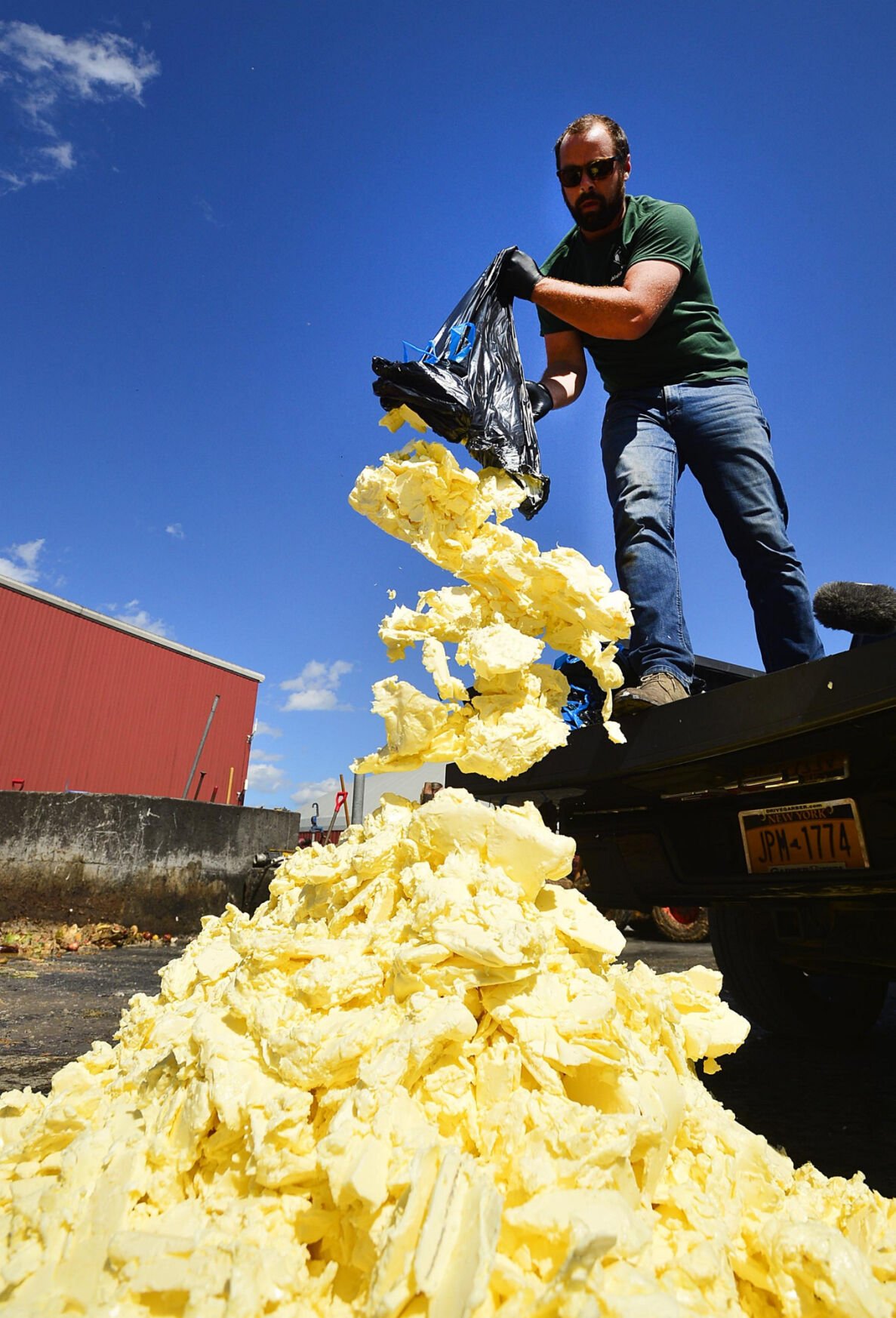 Vice President Chris Noble of Noblehurst Farms dumps the remains of the New York State Fair butter sculpture out of black garbage bags on Tuesday afternoon. The butter was mixed with food waste and will be used to produce renewable energy. 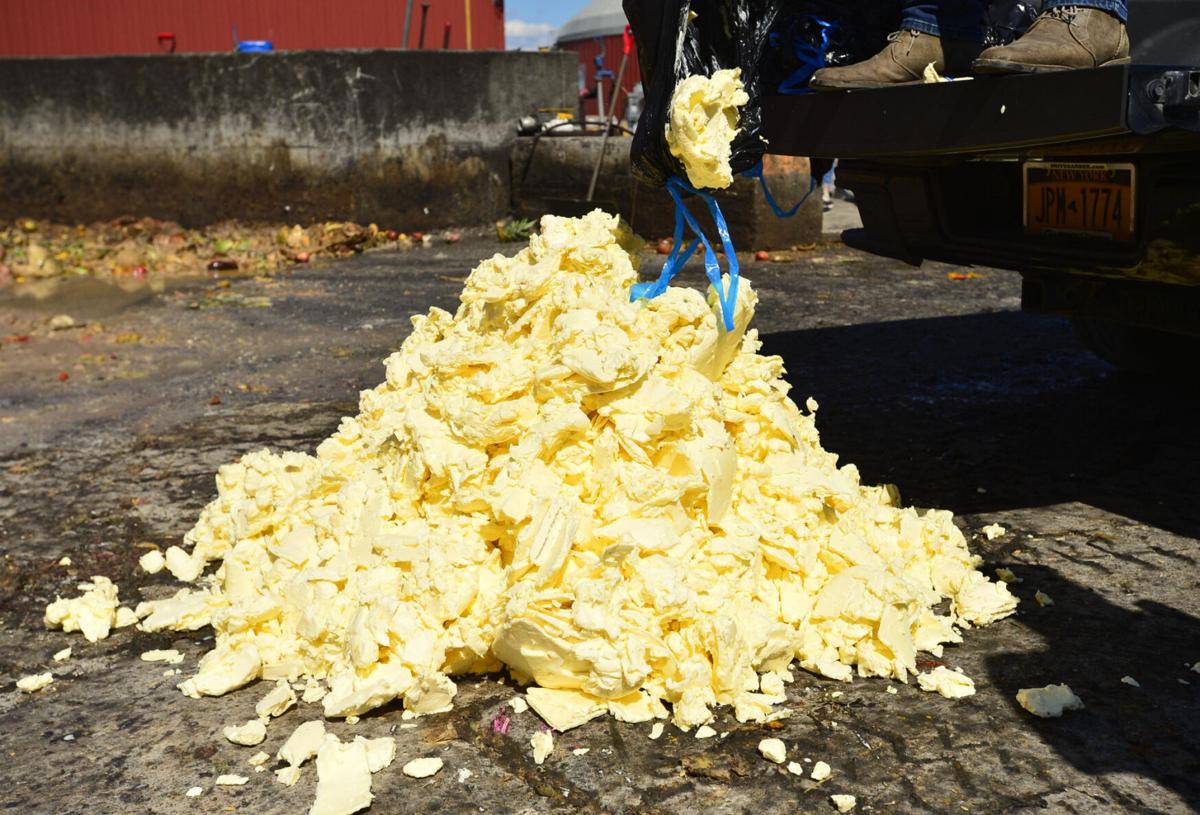 The remains of the New York State Fair butter sculpture lie on the ground awaiting processing at Noblehurst Farms. 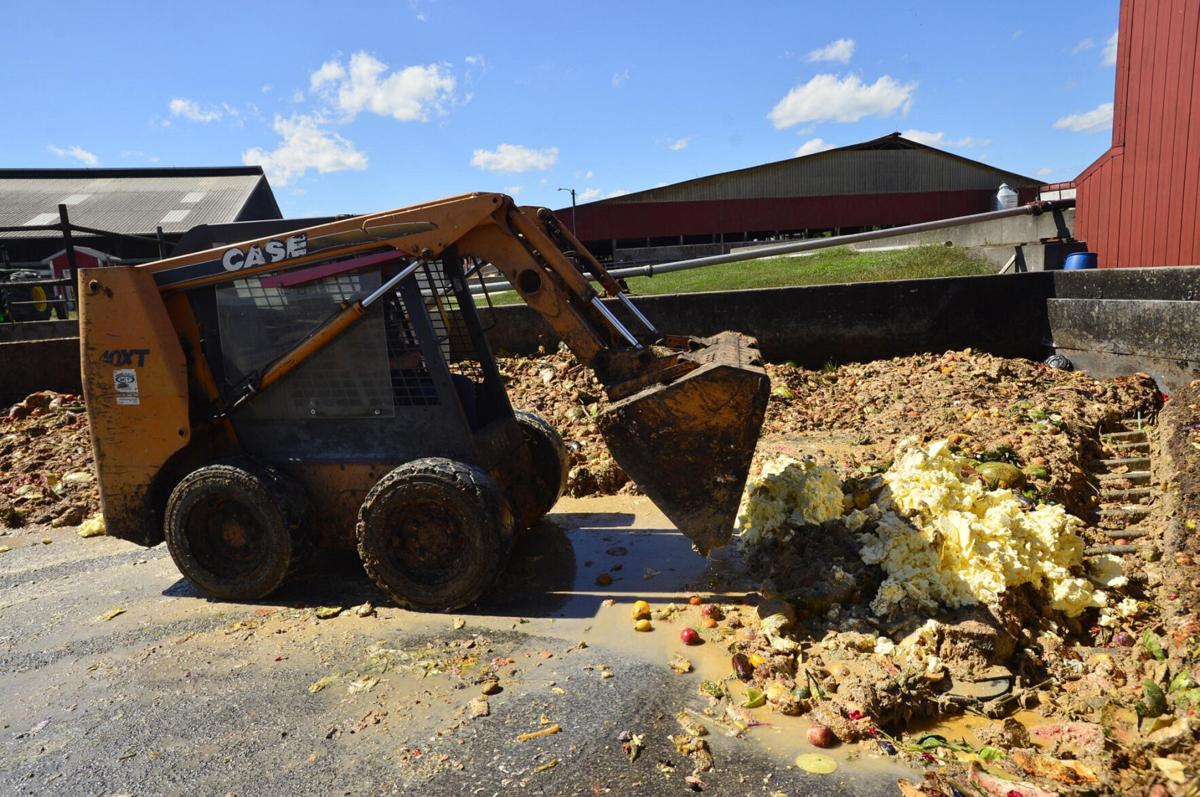 Vice President Chris Noble of Noblehurst Farms dumps the remains of the New York State Fair butter sculpture out of black garbage bags on Tuesday afternoon. The butter was mixed with food waste and will be used to produce renewable energy.

The remains of the New York State Fair butter sculpture lie on the ground awaiting processing at Noblehurst Farms.

PAVILION — Even the greatest butter sculptures must meet their end.

After an 18-day viewing at The Great New York State Fair, the 53rd Annual Butter Sculpture is being put to a new use a Noblehurst Farms.

About 800 pounds of the sculpture’s remains were delivered Tuesday afternoon to meet their ultimate fate. What had once been a butter-based rendition of kids at play was now, well, an enormous pile of glop.

“We brought the butter back from the New York State Fair today,” said Vice President Chris Noble of Noblehurst Farms. “The Cornell Master Gardners put it into plastic bags for us,”

The butter was dumped out of the plastic bags and mixed together at the farm with watermelons, pumpkins, and other food scraps collected from local Wegmans stores and universities for recycling.

“We are going to put it through our system that combines food scraps along with our cow manure to create a biogas in our anaerobic digester, and that biogas will be burned for electricity, Noble said.

Noblehurst Farms has been reusing the butter for years.

This year’s sculpture, “Back to School, Sports, and Play ... You’re Gonna Need Milk For That,” featured three scenes — teens in a school cafeteria, on a soccer field, and at home gaming.

The three-part masterpiece illustrated that whether in school, participating in sports or at play with their friends, dairy products are an important component of meals and snacks, offering essential nutrients to power learning and fueling physical activities.

“It was a beautiful piece this year and I brought my daughters out because they really liked the soccer players,” Noble said. “It was bittersweet but at the same time we are providing a circular loop here. The butter is made from milk up in Batavia, then brought to the fair, created a beautiful sculpture and then brought back here to create renewable energy that will produce power to run our farm to help create milk again.”

The butter was donated from the Batavia-based O-AT-KA Milk Products Co-Op Inc., to the New York State Fair to help create the popular sculpture.

The piece was created by Jim Victor and Marie Pelton and was a donation that O-AT-KA CEO Bill Schreiber said he was happy to make.

“Butter is food and generally the butter that we donate there is a defect in packaging,” he said. “There is nothing wrong with the butter. It could be that a package is miscoded or damaged in some way For one reason or another the packaging was damaged and we could not go to market with it, so it made sense to donate that butter to the sculpture.”

Shreiber has been with the O-AT-KA Milk Products Co-Op for about 10 years and said he has always worked to help out people at state fairs and the farmers who work so hard to produce quality products.

“I have always been an advocate for farmers and for butter in general,” he said. “You don’t have to go back that far in time to when butter was demonized and people ate margarine because they were under misguided perception that it was better for them. This is an opportunity to promote butter and it’s many positive attributes.”

In addition to showing off the butter he is also hoping to educate people about its nutritional values.

“Butter is a wonderful product and sometimes people misconstrue the nutritional value of butter,” he said. “Butter is high in all of the fat soluble vitamins. Vitamins A,D,E. Vitamin A supports your body’s natural defenses and your immune system,vitamin D is all about bone growth and vitamin E plays a role in maintaining healthy skin and reduces damage from UV and sunlight. So butter is, can and should be part of a healthy diet if taken in moderation. It is a wonderful product.”

In addition to the health benefits Noble said the renewable energy created from the butter could be enough to provide power to local home for about three days.

“The anaerobic digester is basically like a big stomach heated to the tune of about 104 degrees and is infused with lots of bacteria,” he said. “So just like your stomach, the bacteria eats the food and creates gas and that gas is then used a renewable natural gas to create electricity.”

The anaerobic digester is a 1.3 million gallon vessel full of food waste and manure. It’s something that some say not only benefits Noblehurst Farms but the entire community.

“The methane gas that normally would have been emitted by the decomposition of organic matter such as butter is now captured in this big dome and is no longer going into the atmosphere and it is going into a beneficial use and that is a great thing for the environment,” Noble said.

From large scale renewable energy projects to small ones, members of the American Dairy Association say giving new uses to products is something everybody can do.