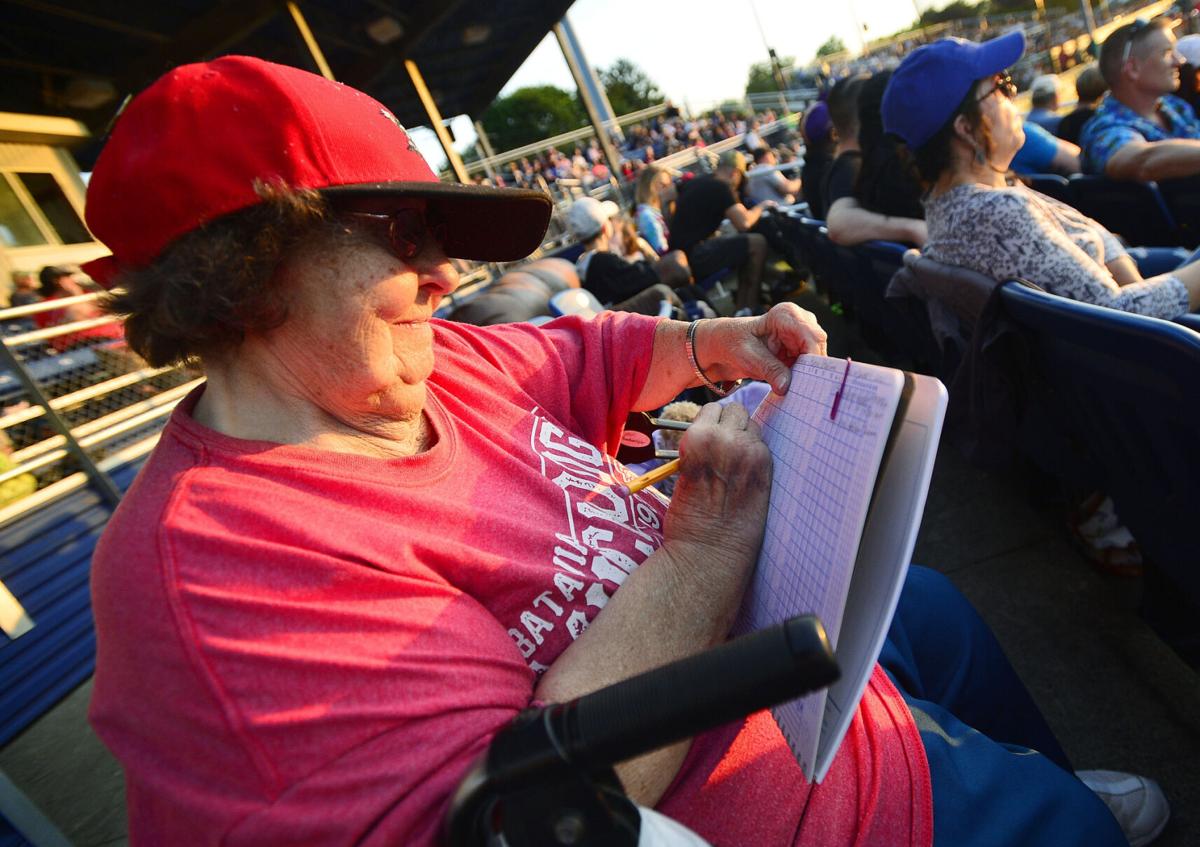 Mark Gutman/Daily News Karen Kopper of Buffalo keeps track of the game on her own line up sheet on opening night of the Batavia Muckdogs at Dwyer Stadium. 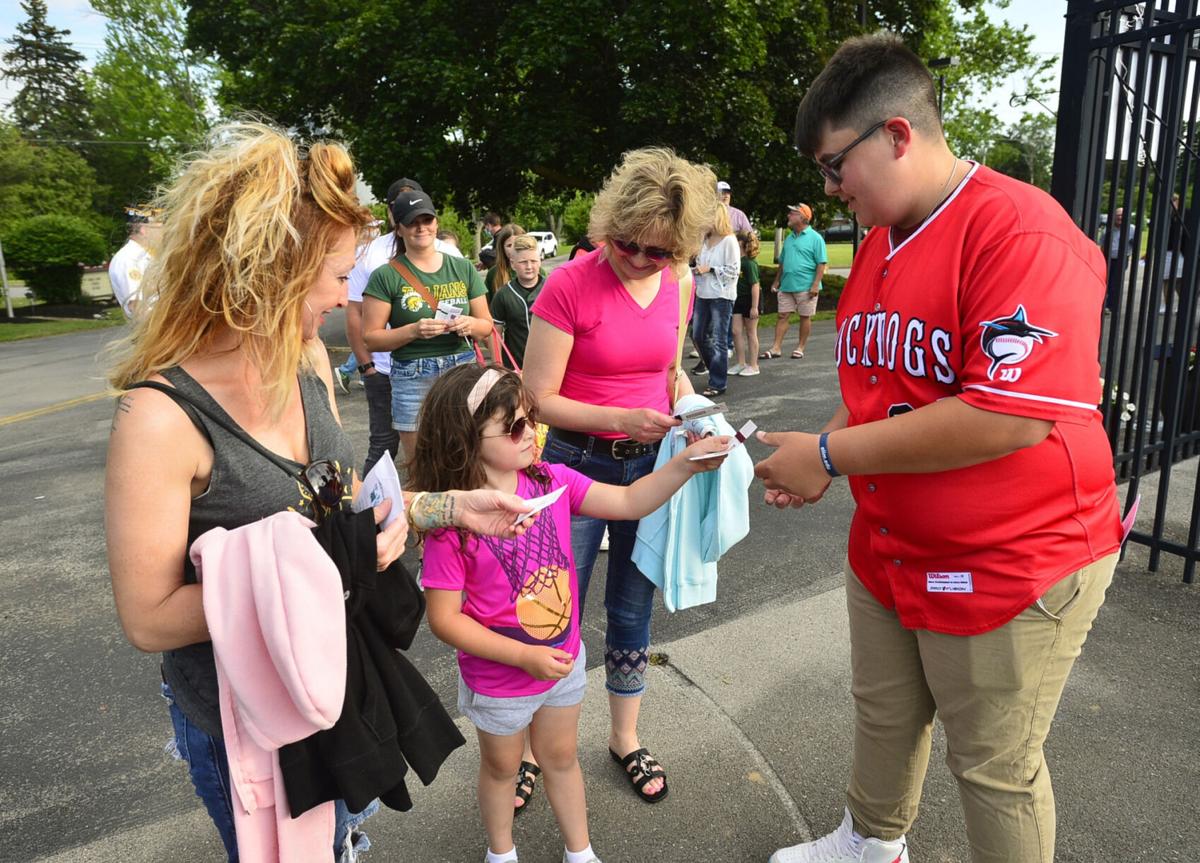 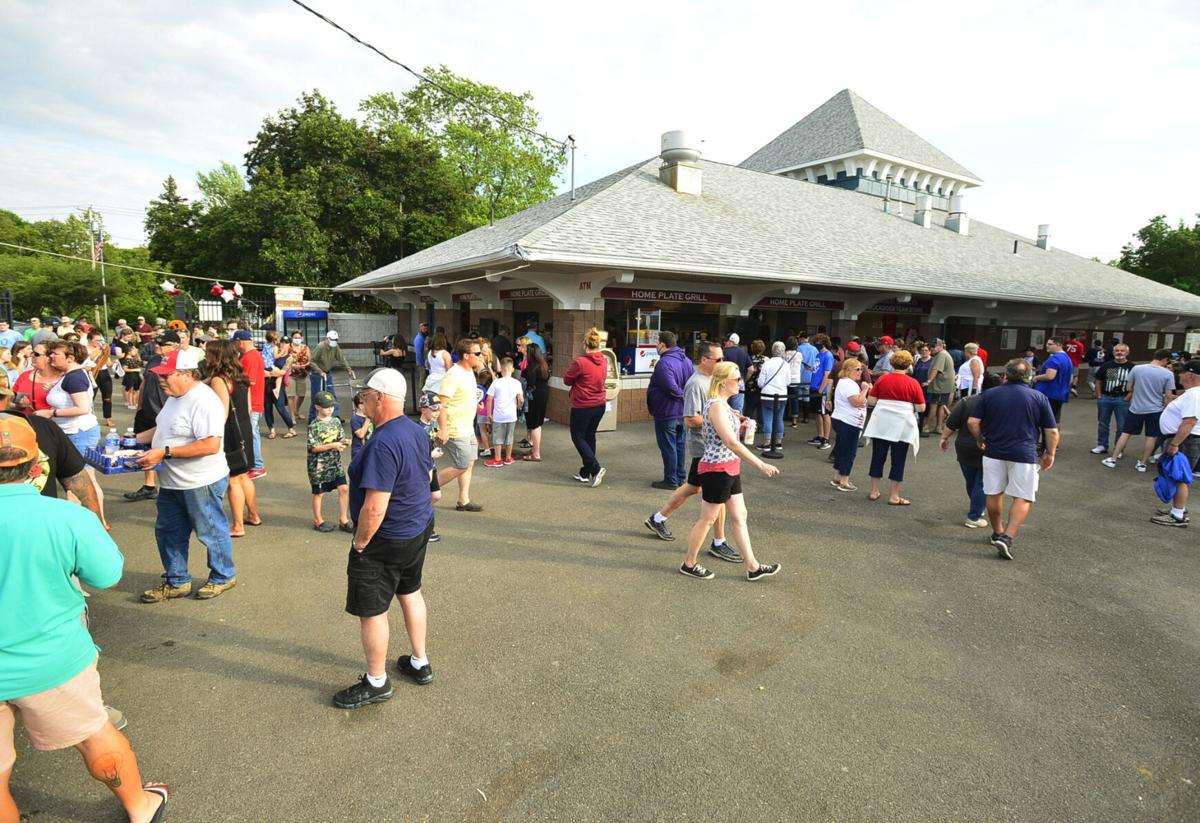 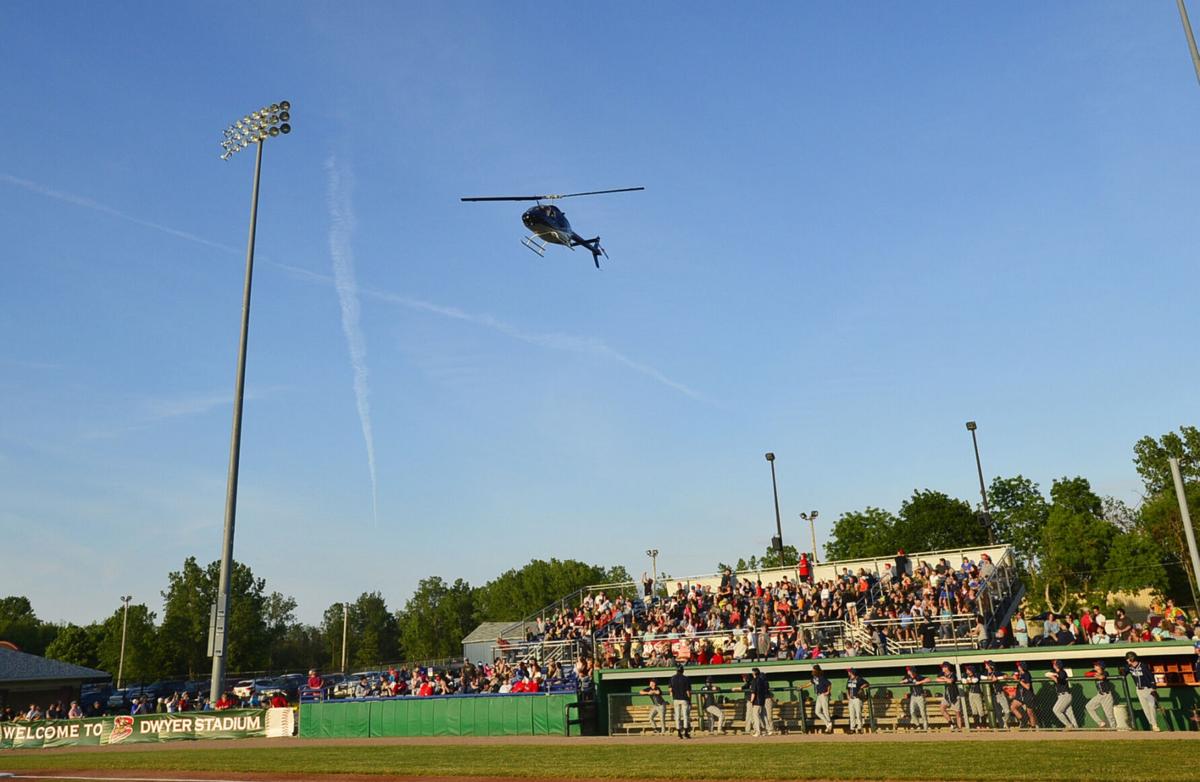 Mark Gutman/Daily News A helicopter with a special baseball drop enters the field prior to the start of the Muckdogs home opener on Friday night in Batavia. 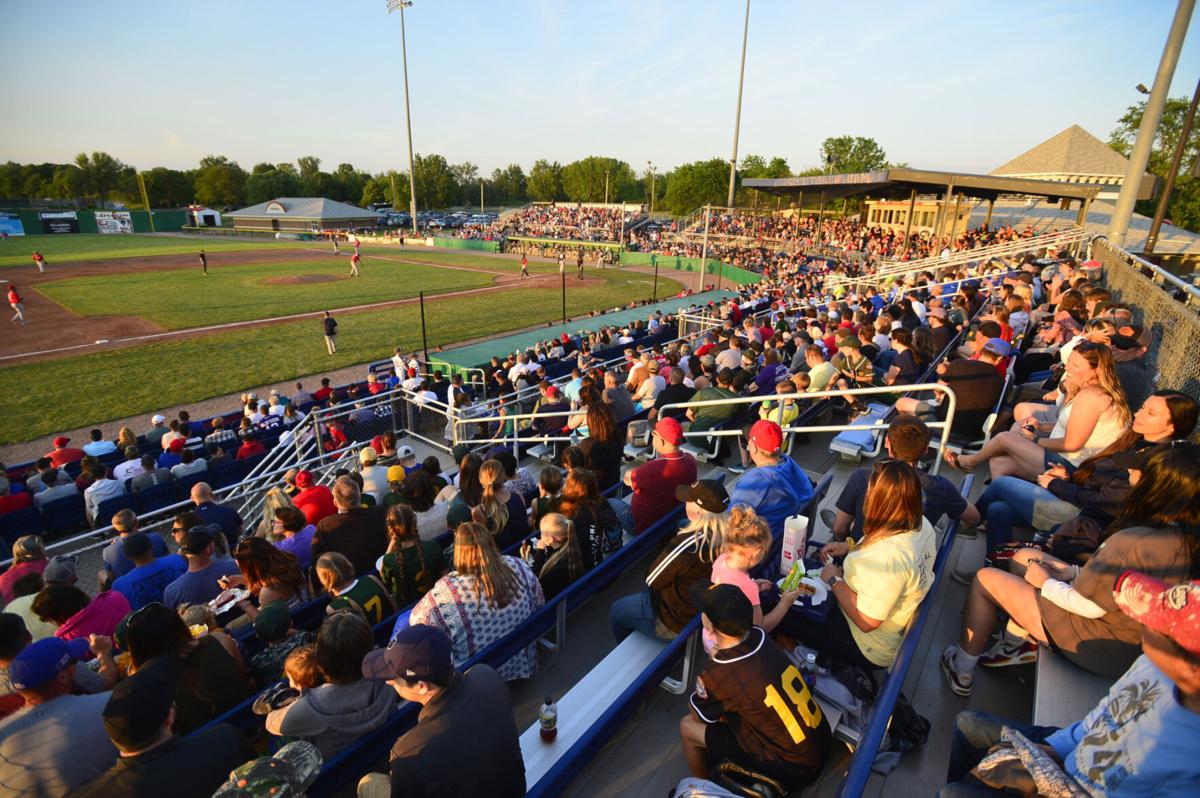 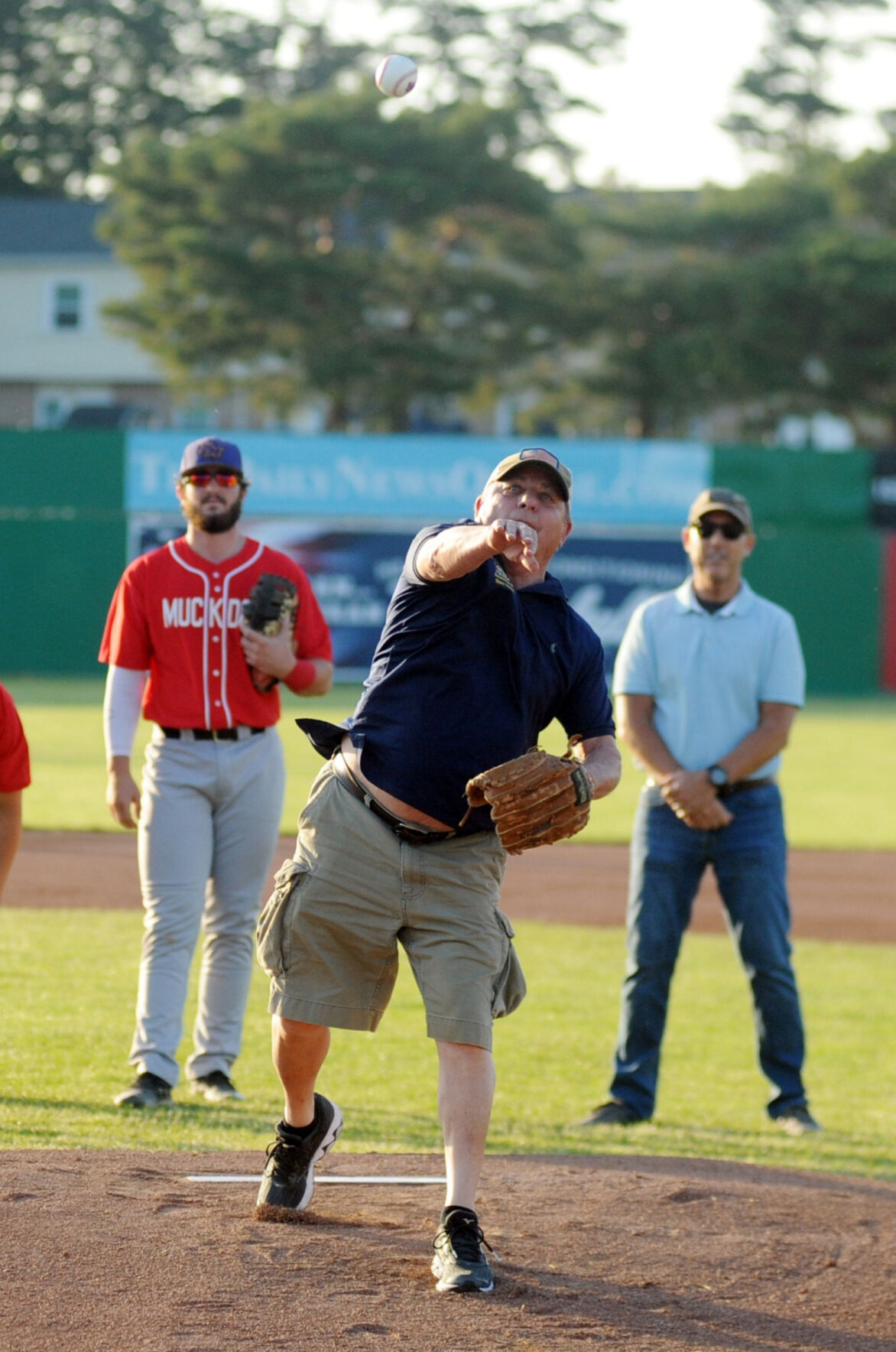 Mark Gutman/Daily News Assemblyman Steve Hawley throws out one of the first pitches of the Muckdogs Home opener Friday night.

Mark Gutman/Daily News Karen Kopper of Buffalo keeps track of the game on her own line up sheet on opening night of the Batavia Muckdogs at Dwyer Stadium.

Mark Gutman/Daily News A helicopter with a special baseball drop enters the field prior to the start of the Muckdogs home opener on Friday night in Batavia.

Mark Gutman/Daily News Assemblyman Steve Hawley throws out one of the first pitches of the Muckdogs Home opener Friday night.

BATAVIA – The sun was beginning its descent above the left-centerfield wall at Dwyer Stadium as Batavia Muckdogs pitcher Tyler Prospero, a Batavia native, delivered the game’s first pitch from the mound. At the plate, Elmira’s South Trimble connected on a soft fly ball to right-centerfield that was easily caught.

And with that, a Batavia Muckdogs team had again taken the field in the city of Batavia.

Friday night’s game was the home opener for the new Batavia Muckdogs, one of the newest franchises in the Perfect Game Collegiate Baseball League. It also marked the first time that a Muckdogs team had played a home game at Dwyer Stadium.

“I love the Muckdogs. I went through the wall last year. It was so terrible not to be able to see them play,” said Karen Kopper.

Fans packed the stadium at 299 Bank St., welcoming the ‘Dogs back with excitement.

Many fans wore vintage gear from the former New York Penn-League Muckdogs, the last team to use the name. There were several different styles of hats – red or black backgrounds – jerseys, and t-shirts noting the team’s 2008 championship season of the 1939 founding of Batavia’s original New York-Penn League team.

Kopper, who grew up on Ross Street, not far from the stadium, said she’d been a baseball fan since she was a little girl and traveled the train to Cleveland to see Bob Feller pitch. (“I probably shouldn’t have told you that,” she said with a laugh, “You’ll know how old I am.”

Kopper may have been among the senior fans in a stadium filled with all ages, but she was already in midseason form. A fresh spiral-bound scorebook sat on the seat to her left, waiting for her to pencil in the teams’ lineup’ and make pitch-by-pitch notations once the game began. She was also accompanied by a small stuff animal, a light brown dog that she had put in a Muckdogs uniform and also wrapped in a mask “in case it was needed.”

“When a player does really well, I waggle him in the air and throw him up and catch him,” she said, giving the bear a little toss to demonstrate.

Kopper, who now lives in Buffalo, was looking forward to a beautiful season. She said she thinks this team, who she met during a player meet-and-greet for season ticket holders earlier in the week, is closer than any professional Muckdogs team she has followed.

As for the game, she likened it to an orchestra.

“You see different batters come up, and you watch as the infielders move around to where they think the ball will go,” Kopper said. “There’s nothing more exciting than watch a hot corner (third base) to first base play.”

The former Muckdogs had last played at Dwyer Stadium on Sept. 4, 2019, a playoff game victory over the Lowell Spinners. The Muckdogs would lost the next two games on the round and be eliminated from the playoffs.

There was no Muckdog season in 2020 as baseball’s minor leagues shutdown due to the COVID-19 pandemic. With the restructuring on the minor league system by Major League Baseball the New York-Penn League was no more, along with the Muckdogs.

Nichols saw an opportunity to continue Batavia’s baseball legacy and took over the Muckdogs name for the PGCBL. The new Muckdogs will play a 48-game schedule that runs through July. The Muckdogs began their season Thursday, with a 7-0 victory over Elmira.

On Friday, they took the field in Batavia.

“There should be baseball in Batavia,” said Brad Rogers, who was general manager of the New York-Penn League Muckdogs for more than a decade, 1984 to 1995. “The fans in this area are very knowledge able baseball. Thank goodness it’s back.”

“I just love baseball. I’m most excited to actually root for a home team,” said Larry Conway of Batavia. “They have guys from Batavia and the surrounding area. I love that idea.”

Conway has been coming to Muckdog games for years. His friend Jeff Twardowski has been attending for a dozen years.

“Where else can you go see a baseball game without having to travel 40 miles or more?” Twardowski asked.

Cassandra Prong of Corfu attended the game with her extended family, including three young sons who love baseball. Prong estimated that she had been attending baseball games at Dwyer for at least 25 years, since she was a young girl.

“Now, I get to bring my own kinds, and its the same seats I grew up with,” she said. “This has been a very welcome back to normalcy, and that the community turned out like this is fantastic.”

Many of longtime fans noted that returning to Dwyer was like an old home day at the stadium.

“I’ve been coming out here for years. Always the same seats, and knowing the same people,” Conway said.

Rogers said walking in to the stadium he met several people he knew from years’ past.

“It’s neat to be able to see them again,” he said.

For others, Friday’s game was their first time at a ballgame at Dwyer.

“I look forward to coming back,” said Danielle Bell of Batavia, who was with a group from Alexander Tri-Town baseball that participated in opening night ceremonies and joined players on the field.

Tyler Lang, one of the Alexander ballplayers, said it was exciting to be with the players. Though, he was looking forward to popcorn and “eating all that I can eat.”

David Owczarzak, wearing a Muckdogs pinstriped jersey, and his daughter Kendall, with a Muckdogs ball cap, made the drive from Buffalo. They come to a lot of games. David said he wanted to see what the knew team would be like, while Kendall said she “likes watching baseball and spending time with my dad.”

A night at the ballpark also provided a sense of optimism after a long 15 months of so living with a pandemic and many restrictions.

“It’s nice to be getting closer to normalcy, to be able to come out to something like this,” said Tom McGary of Batavia, who was attending with his son, daughter and wife.

A trio of young fans might have been hoping for a lot of foul balls. Caron Colantoni of Batavia was with friends Ben Landers of Batavia and Owen Flynn of Le Roy. They each had baseball gloves and said that being at the game was exciting “and we hope to catch foul balls and have them signed by players,” Caron said.

The opening night ceremonies found energetic introductions from the Muckdogs – high fives, low fives, side fives, arm bumps and leaping high fives. Then there was what Nichols had earlier teased would be something that has probably never happened before in Batavia. A helicopter crossed Bank Street and hovered over the pitcher’s mound where the pilot dropped a ball toward Nichols, who did catch the ball in a faded leather mitt.

The Muckdogs are also home tonight for a game against the Jamestown Tarp Skunks. Game time is 7:05 p.m.