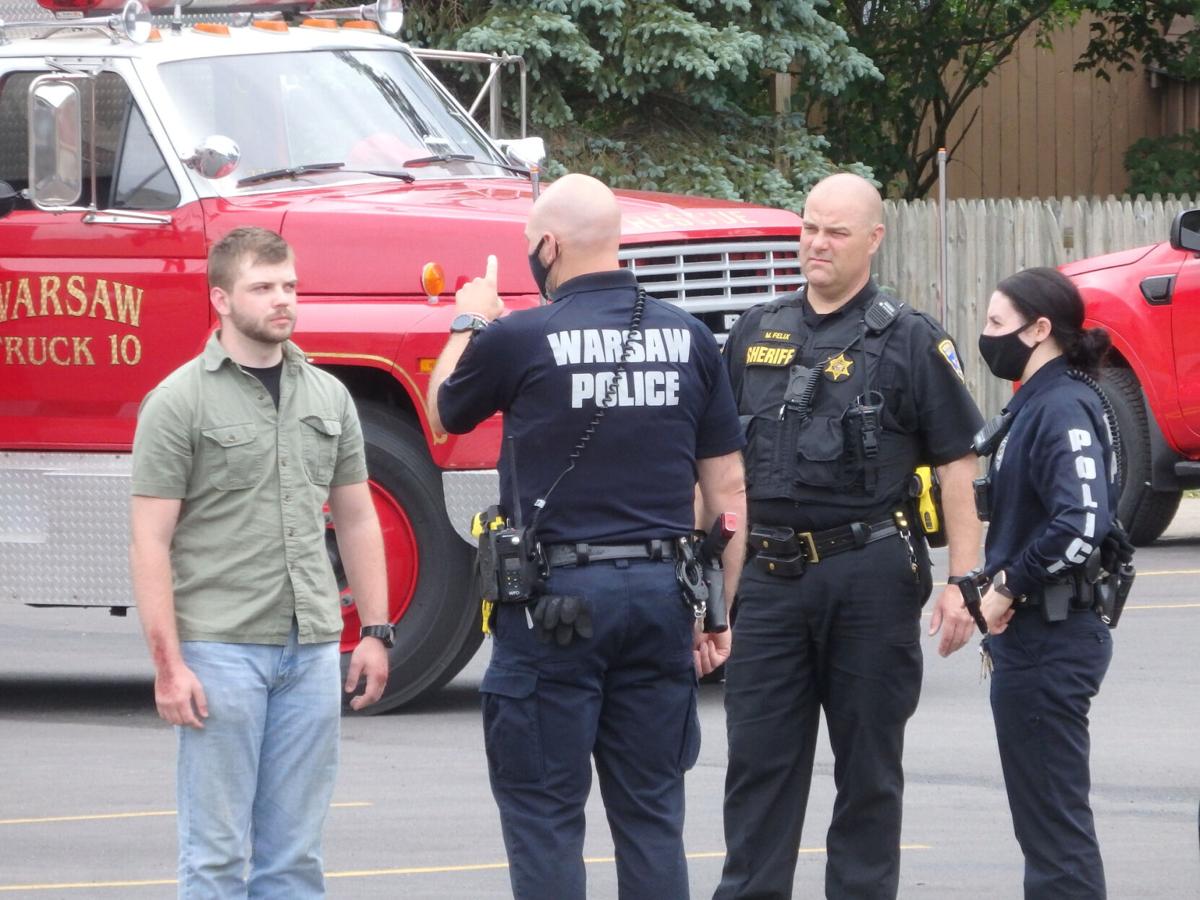 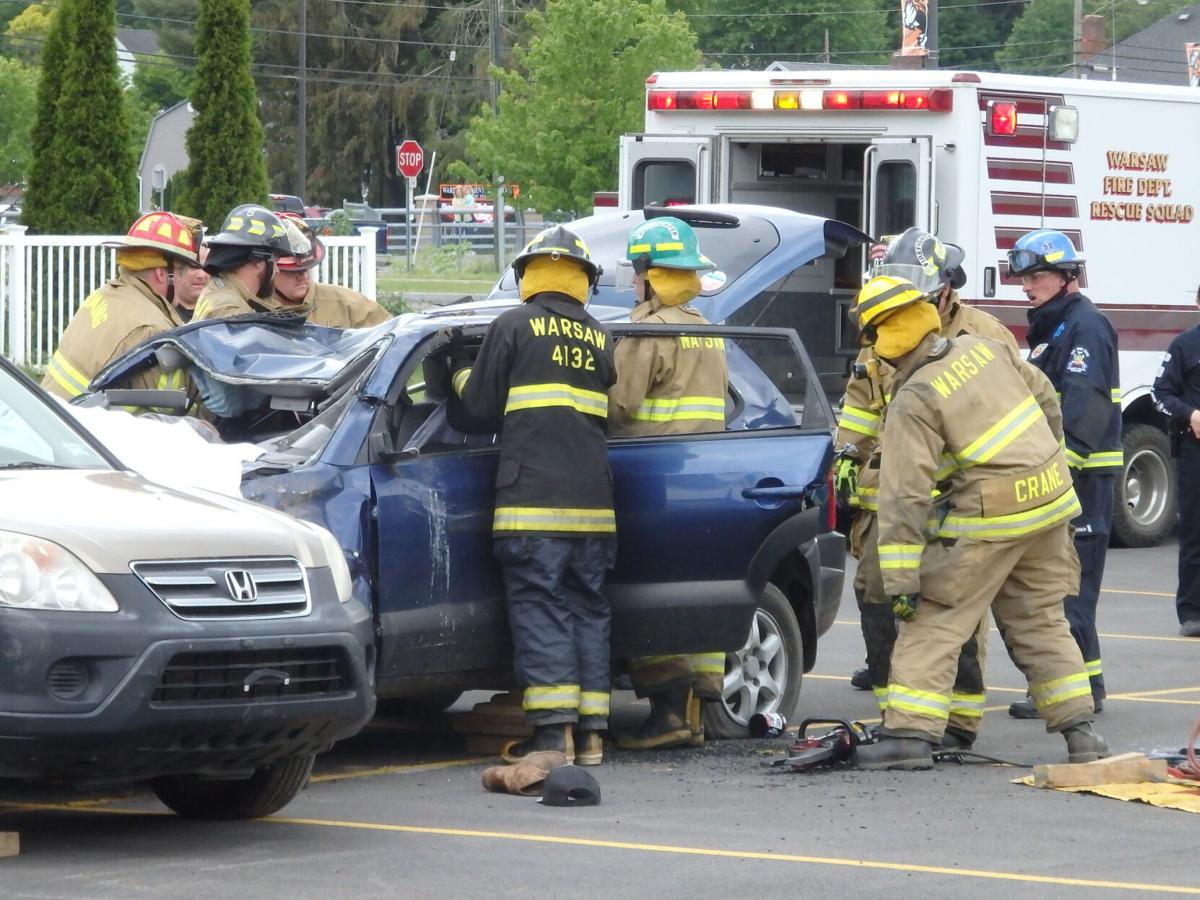 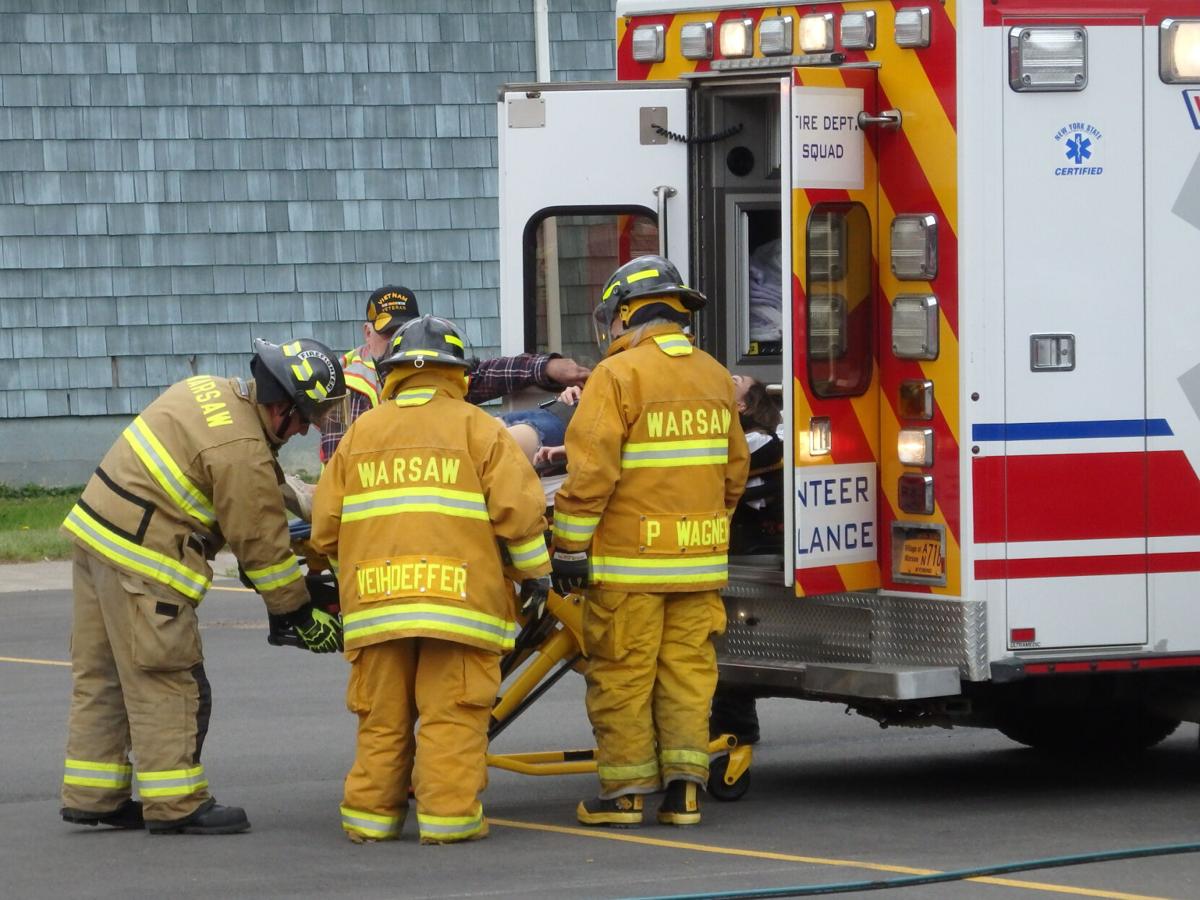 Firefighters load a mock victim into an ambulance during an impaired driving accident simulation Thursday at Warsaw High School. 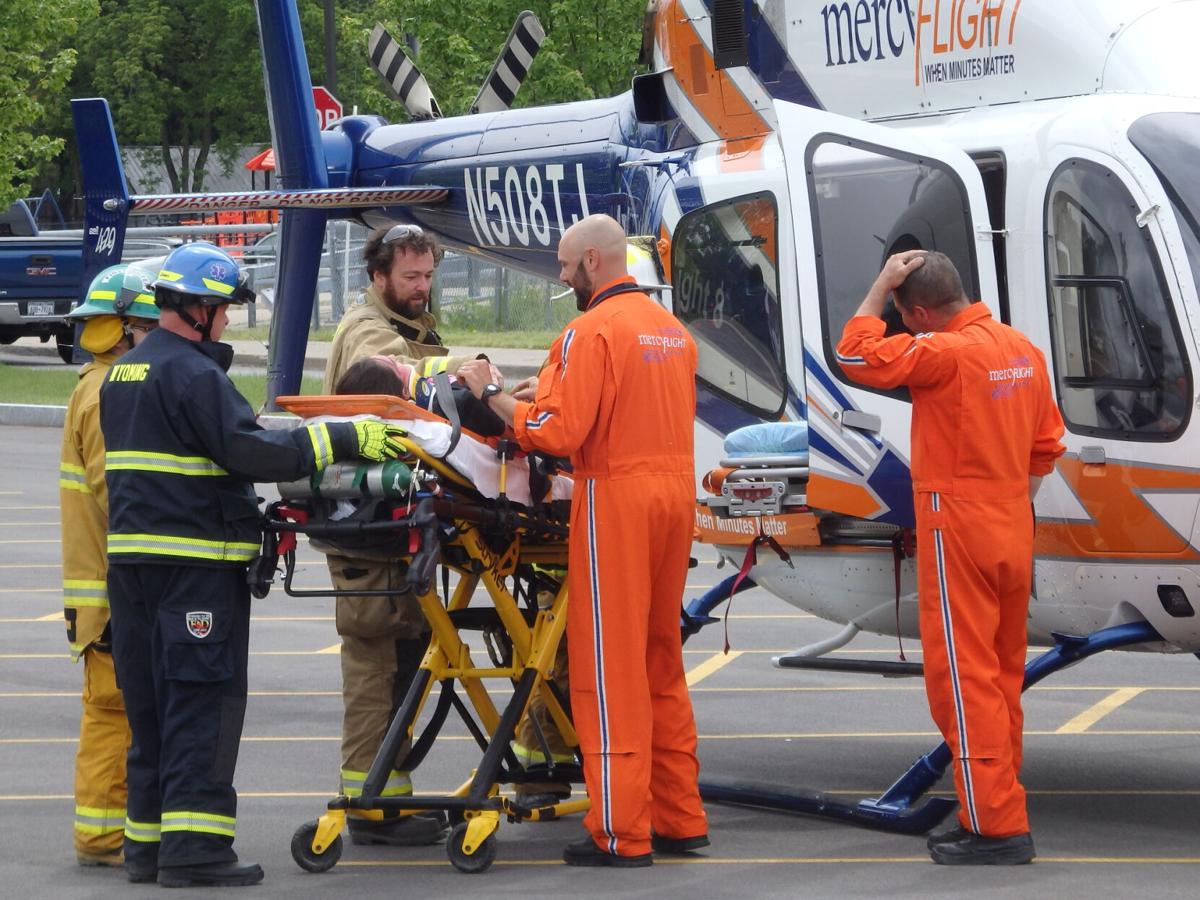 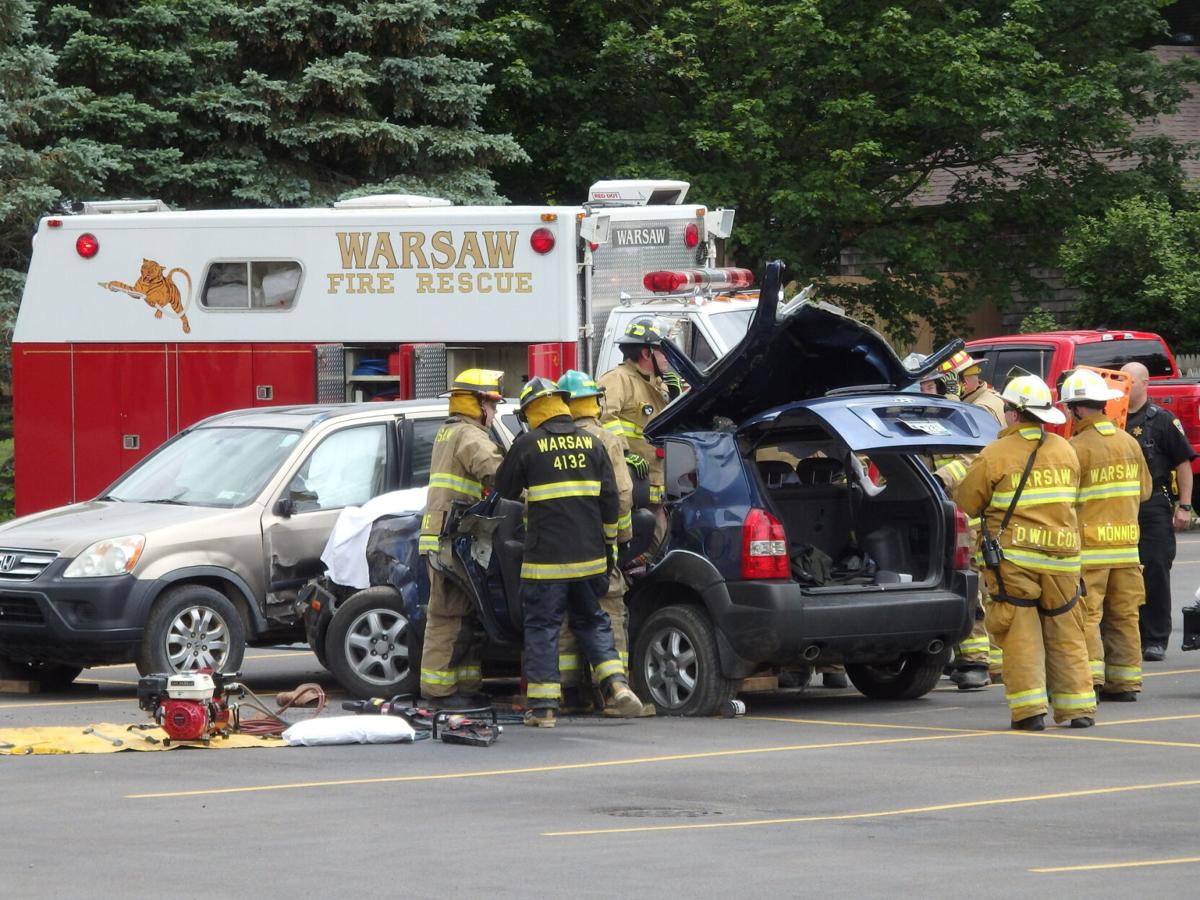 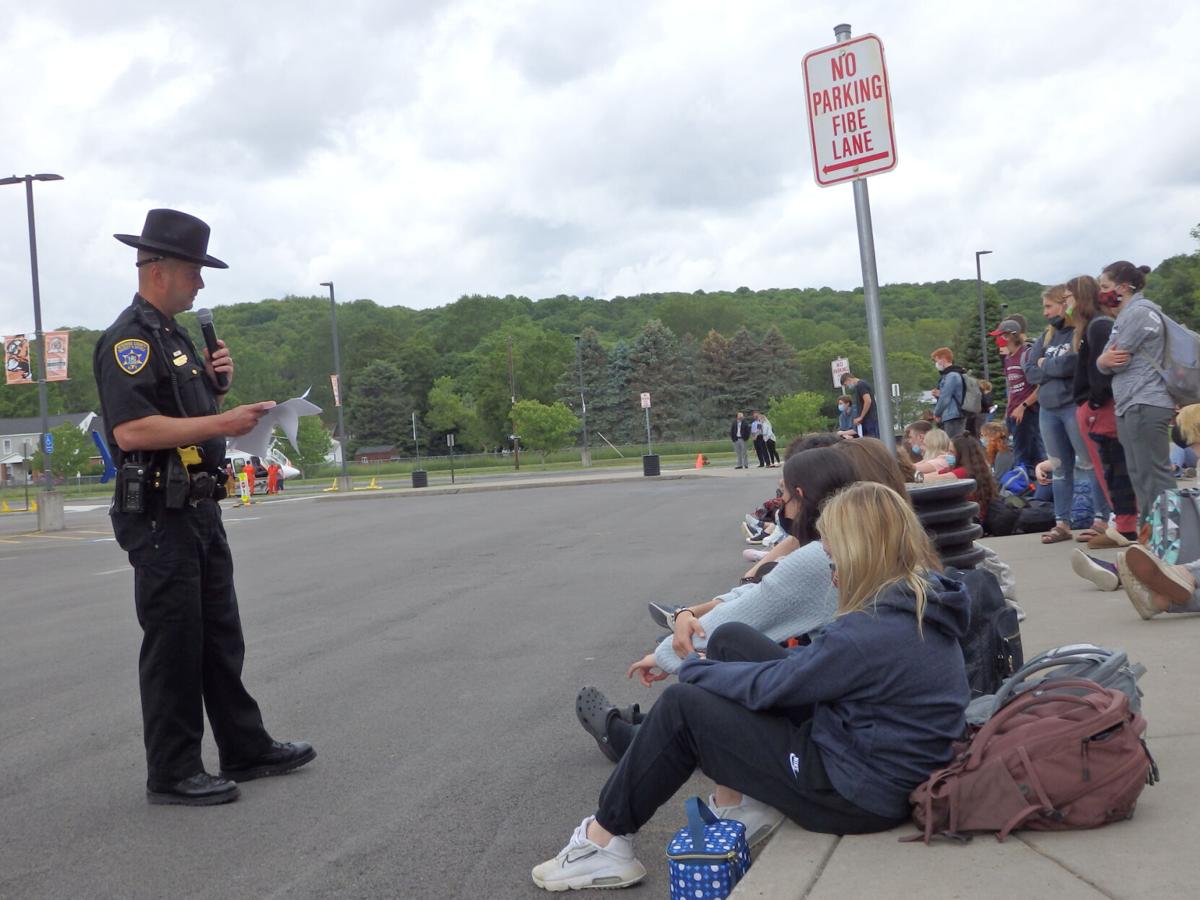 Firefighters load a mock victim into an ambulance during an impaired driving accident simulation Thursday at Warsaw High School.

The experience is all too familiar for police, firefighters and rescue personnel. But even as a simulation, it can form a wake-up call for teens during prom and graduation season.

“The quickest way any of you law-abiding kids can end up in prison is to drink and drive,” said Wyoming County District Attorney Donald O’Geen as juniors and seniors watched emergency crews work at a mock DWI accident scene in the Warsaw High School parking lot. “If something’s going to happen, and that’s going to be the quickest way to go to prison. I’ve seen people 18, 19, 20, 25 years old weep like little babies in the courtroom because they can’t believe they’re going to prison.”

The annual demonstration was conducted at the time of year when fatal accidents are more likely to happen involving young drivers. After the students gathered outside, the village’s fire siren sounded, followed by the arrival police and sheriff’s vehicles, fire trucks and ambulances.

The students watched as firefighters used extraction equipment to remove pretend victims from the two wrecked vehicles. One was loaded into a waiting ambulance while a Mercy Flight helicopter landed for the other.

Village police conducted sobriety tests on one of the drivers and took him into custody, as a coroner and funeral home personnel arrived to handle the accident’s fatality.

O’Geen, along with Sheriff Gregory Rudolph and county Fire Coordinator Bill Streicher narrated and outlined what was happening — again a simulation, but something that happens in real life, and a situation they handle in real life.

“The death notification is undoubtedly, by far, the most difficult and stressful part of my job,” Rudolph said. “After the medical examiner and police personnel complete their on-site investigation, the family of the victim needs to be told.”

“Prom season and graduation are right around the corner,” said district Superintendent Matt Wilkins as the students watched and listened. “ ... It’s just a reminder at the end of the year to make good decisions and it brings it back to the whole (issue) of distracted driving.”

Senior Maddie Stone, 17, played one of the victims, covered in makeup simulating blood and serious lacerations.

“It’s pretty influential,” she said of her participation. “It’s a real thing, so it’s kind of I wanted to be a part of it, to show it really happens.”

What was it like being part of the demonstration?

“It’s weird,” she said. “It gives you a weird feeling, because it can really happen, so it makes it scary.”

Juniors Kourtney Keefer and Emma Tangeman, both 17, were among the students watching.

“I felt it,” Keefer said of the simulation. “It felt like really real.”

As teens, are drinking and driving, and accidents, something that goes through their minds?

“Oh yeah, 100 percent,” Tangeman said. “Especially, I don’t know someone personally but I know people who have had it happen to close people, so it gets to you.”

Tageman said that — even though it was only a simulation — watching the parents identify the child’s body was sad.

“I thought it was a very interesting experience,” he said. “Personally, I have never had to deal with any of those situations thankfully, but I did have a family member who once was Mercy Flighted due to a back injury — like spinal — and seeing the Mercy Flight was pretty interesting.”

“June, for you seniors, is the beginning of the next chapter,” Rudolph said. “All we ask is you do it safely and make those great decisions. That way you can get married and have children of your own, and not be a victim like you saw here today.”