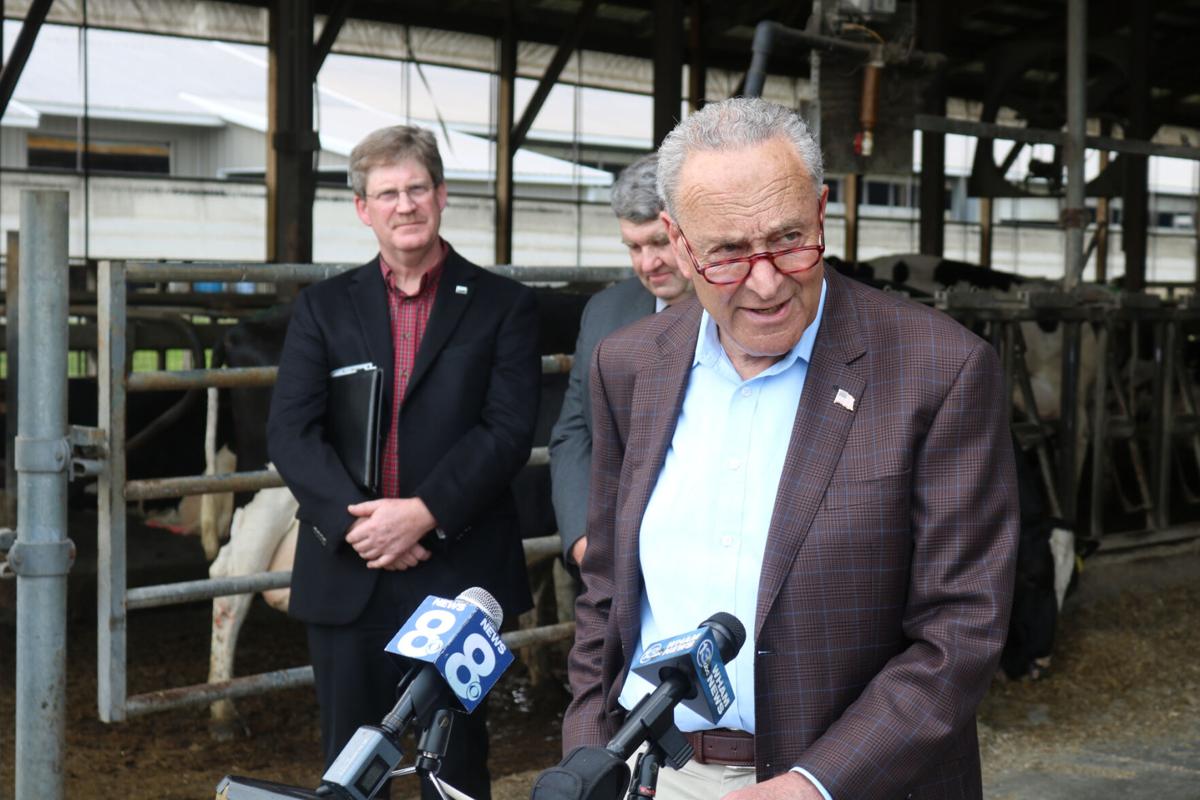 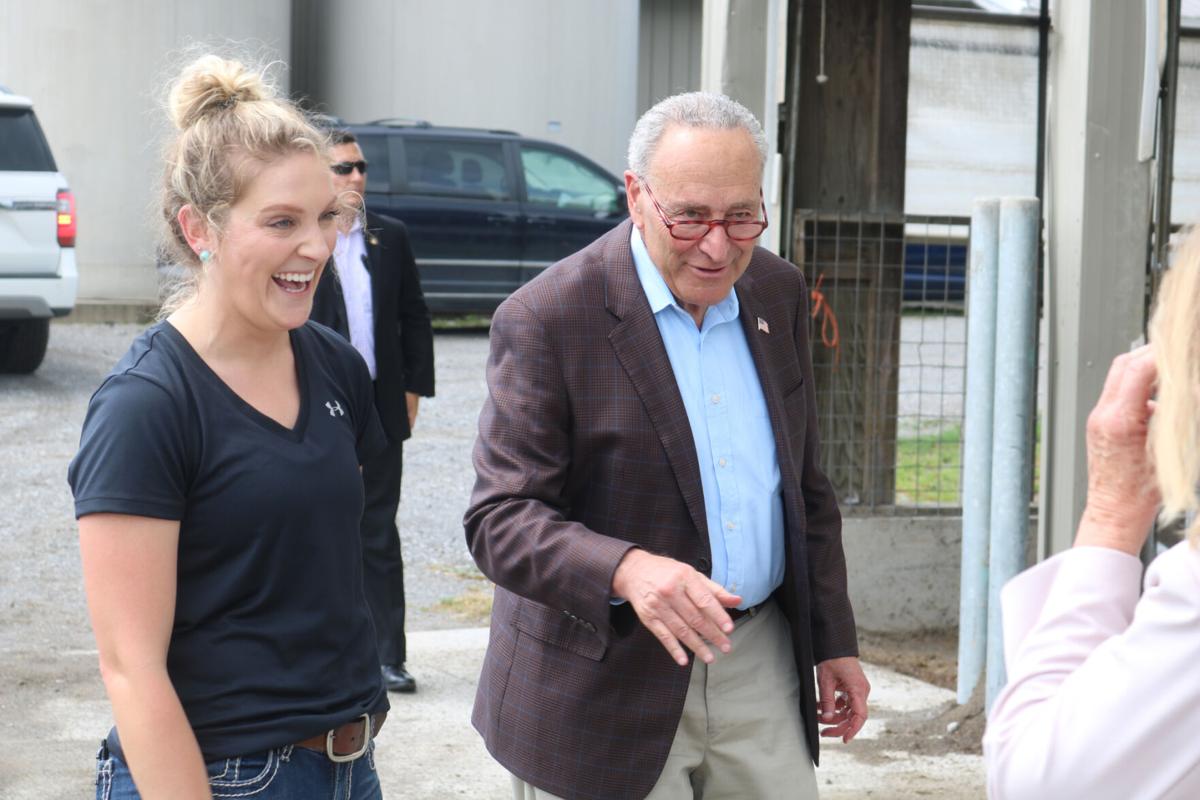 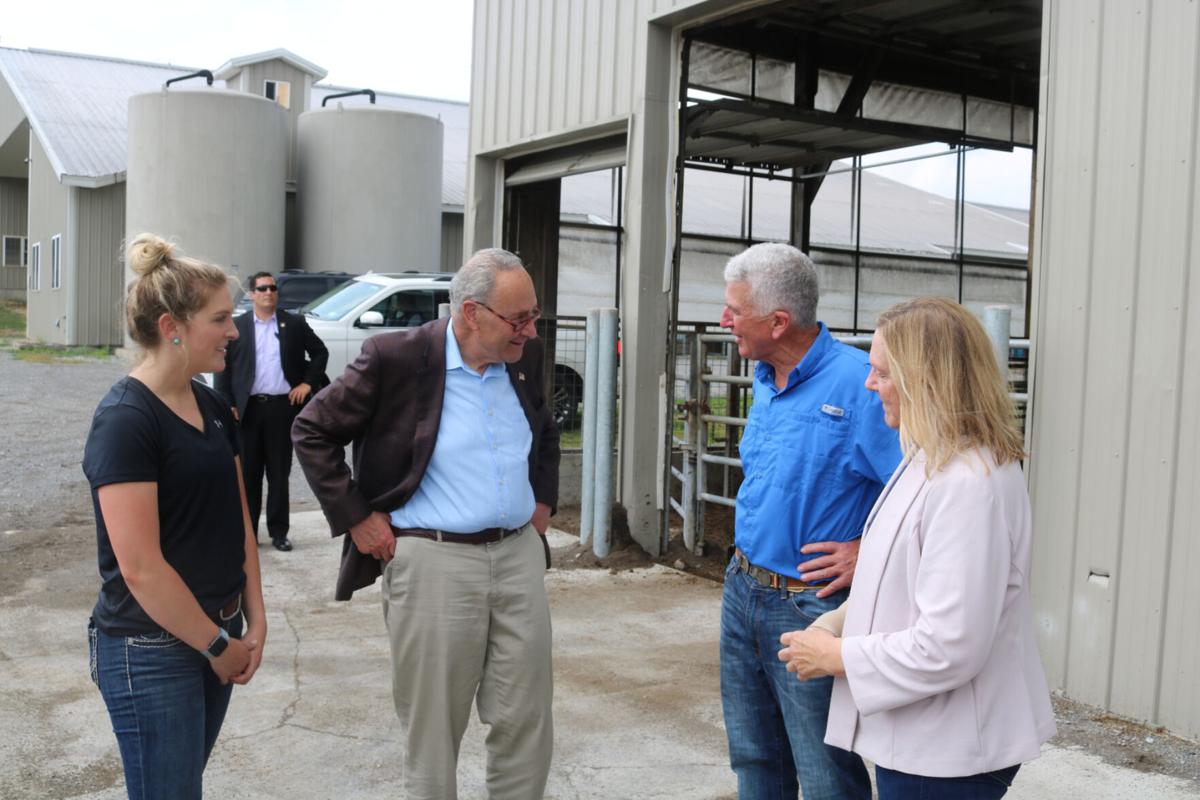 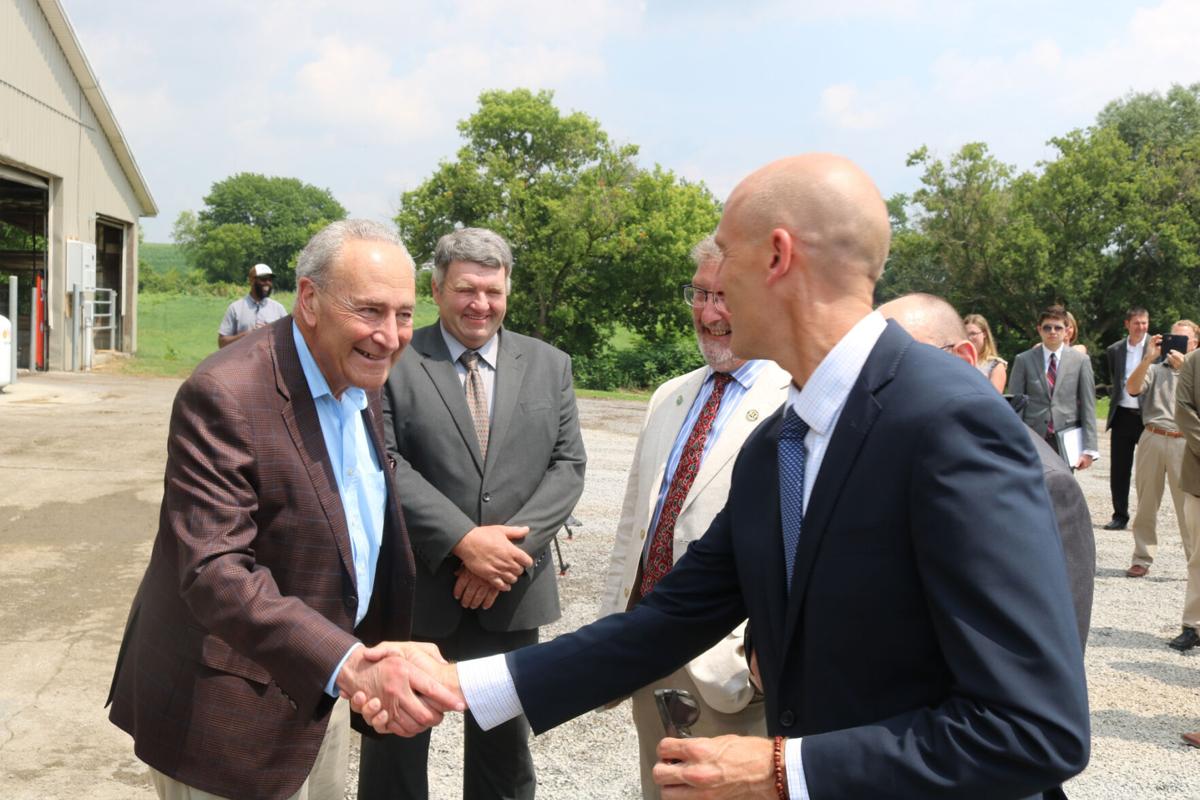 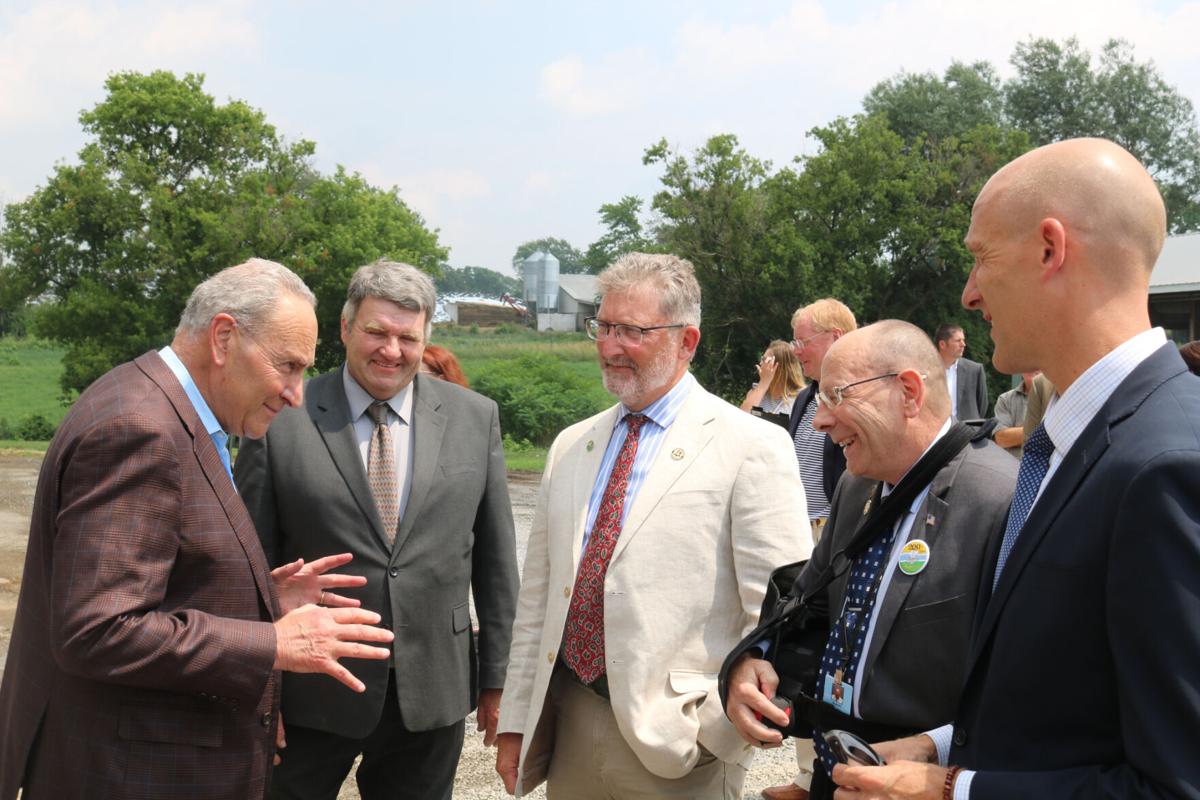 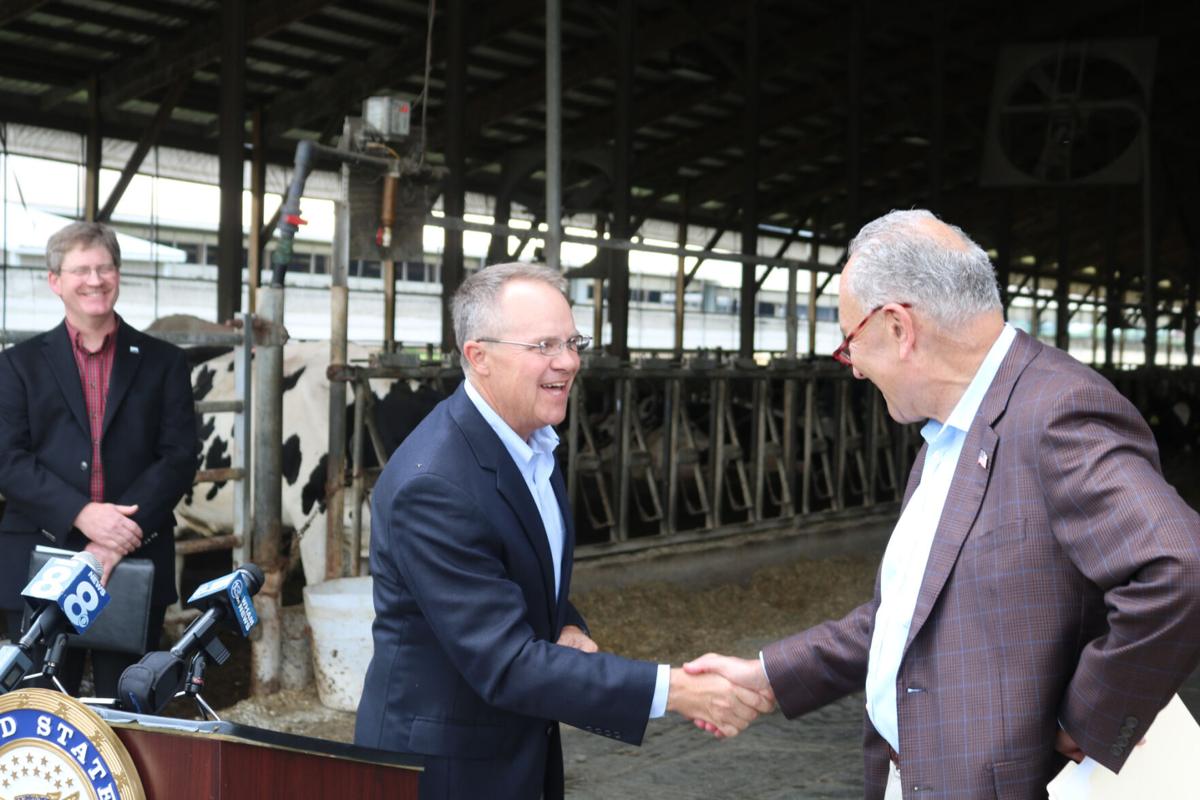 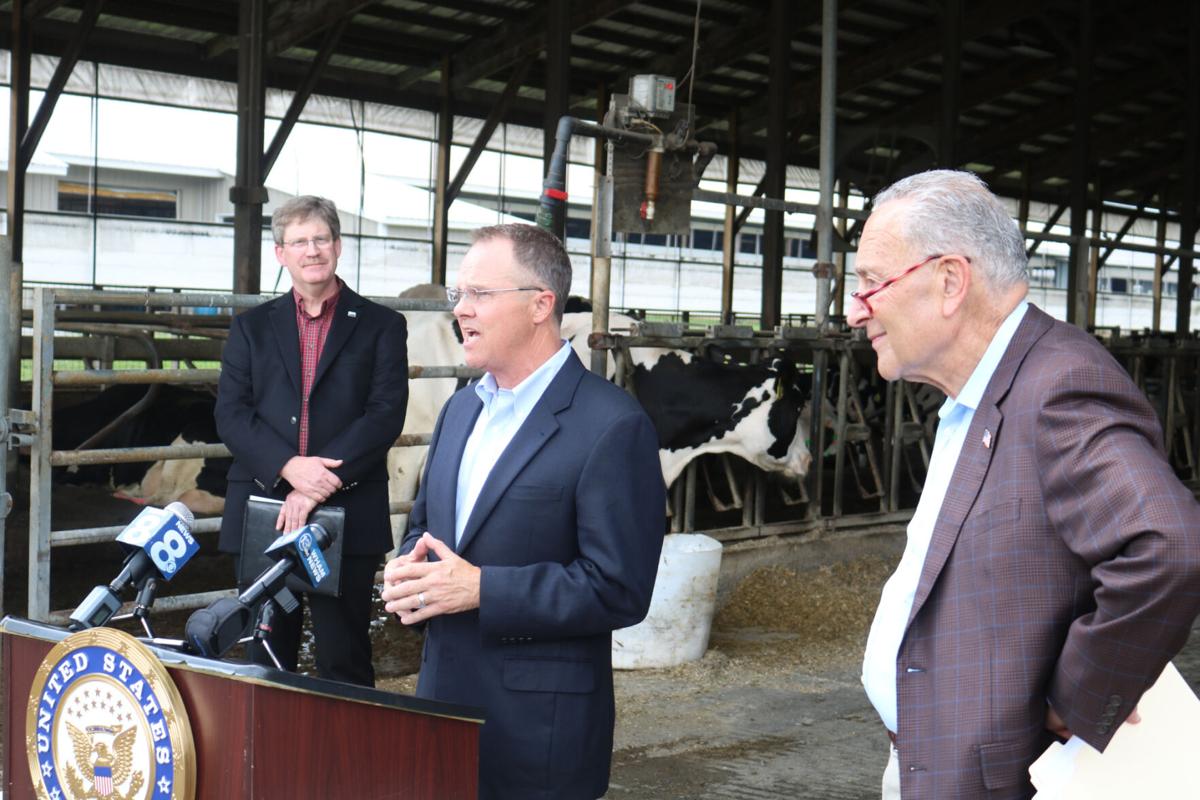 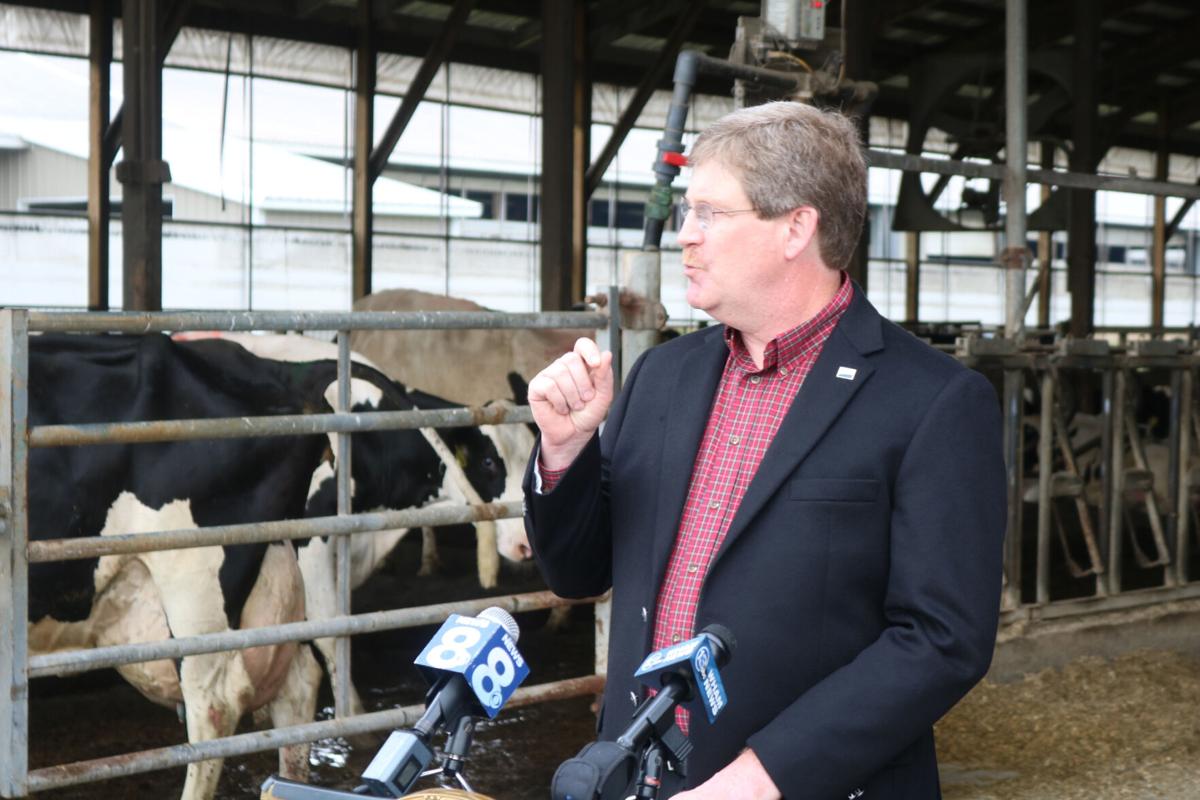 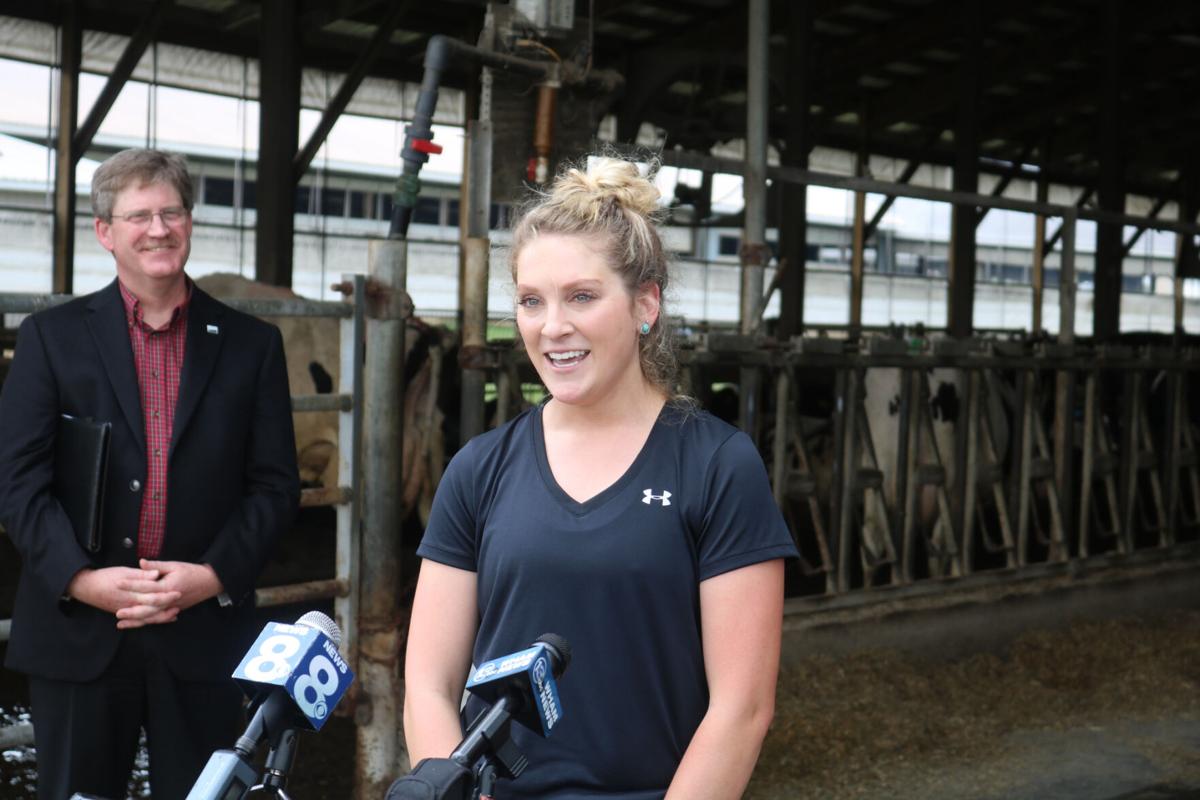 AVON – Up until a few years ago, Jeff Mulligan had dial up internet. It was so slow that he didn’t even bother with email. Then he talked to his neighbor, Mike Howlett of Howlett Farms, about placing an antenna at the top of one of his grain legs on East River Road and beaming it in to the corner of his shop off Barber Road – more than a mile away.

The current, jerry-rigged set up gives Mulligan about 15 megabit per second download speeds. It’s better than the dial up, but it’s also spotty. When it goes down, it’s “a pain in the ass,” said Mulligan, and makes it harder to do what needs to get done on his farm.

“You make do,” said Mulligan, the third-generation owner of Mulligan Farms, of his current set up. “It’s not as bad as it used to be.”

Soon, Mulligan won’t have to rely on his neighbor for shoddy internet access and can look forward to internet speeds many times faster than what he has now. That’s because Mulligan Farms is one of thousands of farms, businesses and homes across Livingston County that will soon have broadband access thanks to an ongoing expansion partnership between the county and Empire Access, an internet service provider based in Prattsburgh, Steuben County.

That effort, which the county has dubbed the Light Up Livingston initiative, took a huge step forward last week with the announcement that the U.S. Department of Agriculture had awarded the county an $11.3 million grant through its ReConnect program that will help fund the latest phase of the expansion.

“We all know how important the internet is these days,” said U.S. Sen. Charles Schumer, who traveled to Mulligan Farms July 6 to announce the funding. “The pandemic has shown us in no uncertain terms that the internet is as essential as the telephone or electricity. It’s a necessity, not a luxury. We all rely on it every day to do our jobs, to study, to communicate with friends and loved ones, now a lot for medicine. So many different things.”

“He created the REA, the Rural Electrification Act, and every home got electricity,” said Schumer. “My goal is to have the same thing for broadband… everyone needs broadband. Everyone needs it and we’re going to try to do it.”

“This is huge,” Coyle said of the grant award. “This is hopefully a springboard to bigger and better things.”

To ensure as many residents have broadband access as quickly as possible, Coyle said the county will be pushing state officials “very hard” in the coming months to expedite the process of securing the permits necessary for Empire Access to mount its fiber optic cable to existing telephone poles instead of having to find alternative means like burying it, which can be a more time-intensive process.

“Empire will tell you – it used to be in the weeks, now its in the months to a year,” said Coyle of the time it can take to negotiate such agreements. “That just elongates the process.”

“It does take time,” acknowledged Bob VanDelinder, director of marketing for Empire Access. “We have to apply for basically licenses or permits to attach to existing poles. Our engineers work with utility companies in order to obtain those permits to attach.”

Jim Baase, chief operating officer for Empire Access, said his company will run about 340 miles of fiber optic cable throughout the county as part of this expansion project.. Once work wraps, somewhere between 2,000 and 4,000 addresses – about 11,000 people – will have the option of signing up for broadband internet access through Empire that didn’t have it before.

“It’s going to be a lot faster and the latency, because we peer in New York City, it’s going to be very low,” said Baase of the internet browsing experience customers can expect. “We’re the best gaming network and we’re the fastest network in the U.S.”

While building out fiber networks costs about the same in urban and rural areas, Baase said rural networks come with fewer potential customers, which can make turning a profit more difficult.

“So we need programs like this USDA ReConnect program to make it all work,” he said.

Empire is expected to begin work on expanding its network in 2022. Expansion will occur in, if not all, at least the vast majority of the county’s 17 towns, with significant expansion planned in areas of Mount Morris, Springwater, York, Caledonia, Nunda, Ossian and Geneseo.

All in, the expansion is expected to take around 2 or 2-1/2 years and cost about $15.1 million. Livingston County is covering the balance of the project’s cost after the grant funding is exhausted – about $3.8 million.

A work schedule has not yet been finalized, said VanDelinder, though he expects one to come together within the next few months. Empire’s plan, said VanDelinder, is to bring service to customers on a rolling basis, as networks are built out in certain areas.

“Initially, what we’re looking at (is) as we finish an area, once we have our network up and running hopefully we can get service to those residents sooner and then just continue to build out those areas,” he said.

A basic internet service plan through Empire will run customers $50 per month for 250 mbps download and 50 mbps upload speeds.

Wifi service is not included in that $50 base subscription rate, said VanDelinder, and ranges from $5 to $10 per month.

Livingston County’s partnership with Empire Access is the second in its multi-phase plan to bring broadband access to every address in the county.

It’s the county’s hope that more readily available broadband access will help spur economic growth and make it easier for local businesses to operate and connect with customers across the globe.

At Mulligan Farms, a faster internet connection will allow the farm to implement a new system to manage its milking operations that will allow for remote tech support.

“So what they’re going to be able to do is to log on to the computer and access and understand if there’s a problem with our milk system (and) they’ll be able to fix it remotely,” explained Emilie Mulligan, who manages the farm’s dairy operations. “They’re based out of Batavia and Auburn and they’re short on support and staff right now so they can do it remotely instead of driving an hour out here to access it.”

A faster connection will also allow the farm to better connect with schoolchildren during virtual farm tours.

“To be able to educate young children about where their food comes from and to be able to have broadband here on the farm will make that much easier for us going forward,” said Emilie Mulligan.

The county’s broadband expansion efforts started back in 2019, when the county commissioned an inventory of internet infrastructure and a public survey to gather input from residents about their level of satisfaction with their internet service and what changes they wanted to see in the future.

The first phase of the broadband expansion in the county got underway in 2019, when the Federal Communications Commission approved $12.8 million in funding over 10 years for Armstrong Telecommunications to bring broadband access to 6,700 homes in rural New York, including 42 in southern Livingston County. According to the FCC, Armstrong will offer download speeds of at least 100 mbps and upload speeds of 20 mbps.

Even after Empire’s expansion is complete, Coyle said several hundred and perhaps as many as 1,000 county residents will still lack broadband access.

To bring that number closer to zero, the county plans on applying for a $5 million grant through the National Telecommunications and Information Administration. Should it receive the funding, the county would use it to expand broadband access via a public-private partnership with one or more internet service providers – similar to its partnership with Empire Access. The NTIA grant application is due in August. The agency is expected to announce recipients in late November.

Beyond the NTIA funding, the county has plans to apply for additional funding through USDA’s ReConnect program and is open to pursuing other state and federal funding opportunities to meet its goal of bringing broadband access to every address in the county.

Coyle said the county may even consider paying for future expansion out of its own pocket using some of the $12.2 million in federal funding it’s slated to receive through the American Rescue Plan.

Livingston County has set up a dedicated webpage for information about its broadband expansion plans. It can be accessed at LivingstonCounty.us/LightUpLivingston. The page includes a frequently asked questions section as well as links to detailed maps that show what areas Armstrong Telecommunications and Empire Access plan on expanding broadband access.

Those seeking more information on the project can also contact the Livingston County Planning Department at (585) 243-7550.