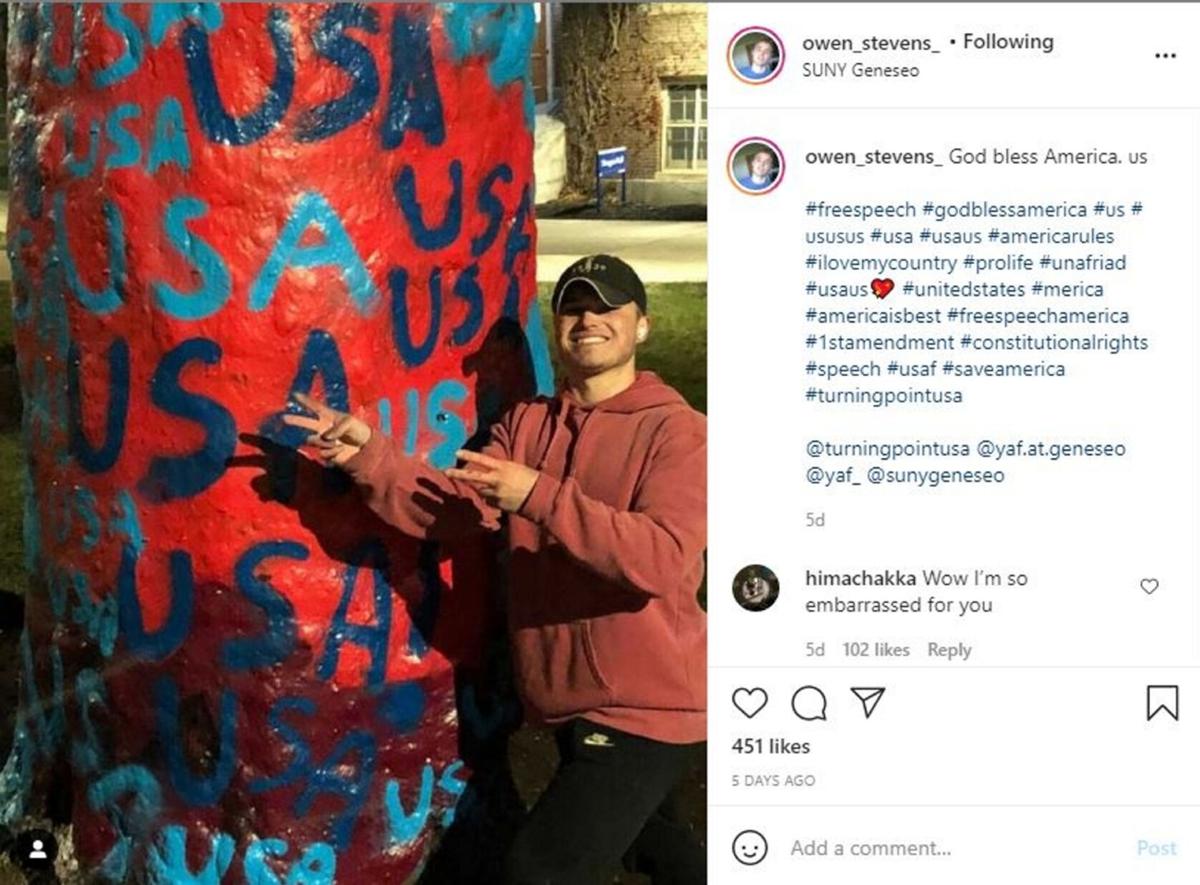 Photo courtesy of Owen Stevens SUNY Geneseo junior Owen Stevens poses for a photo next to the college’s Greek tree in Sturges Quad. Last week, Stevens painted over messages of support for the Black Lives Matter movement that previously adorned the tree. The act has sparked controversy at the college, which has put in place a temporary moratorium on the repainting of the tree and a rock elsewhere on campus that also acts as a de facto public canvas. 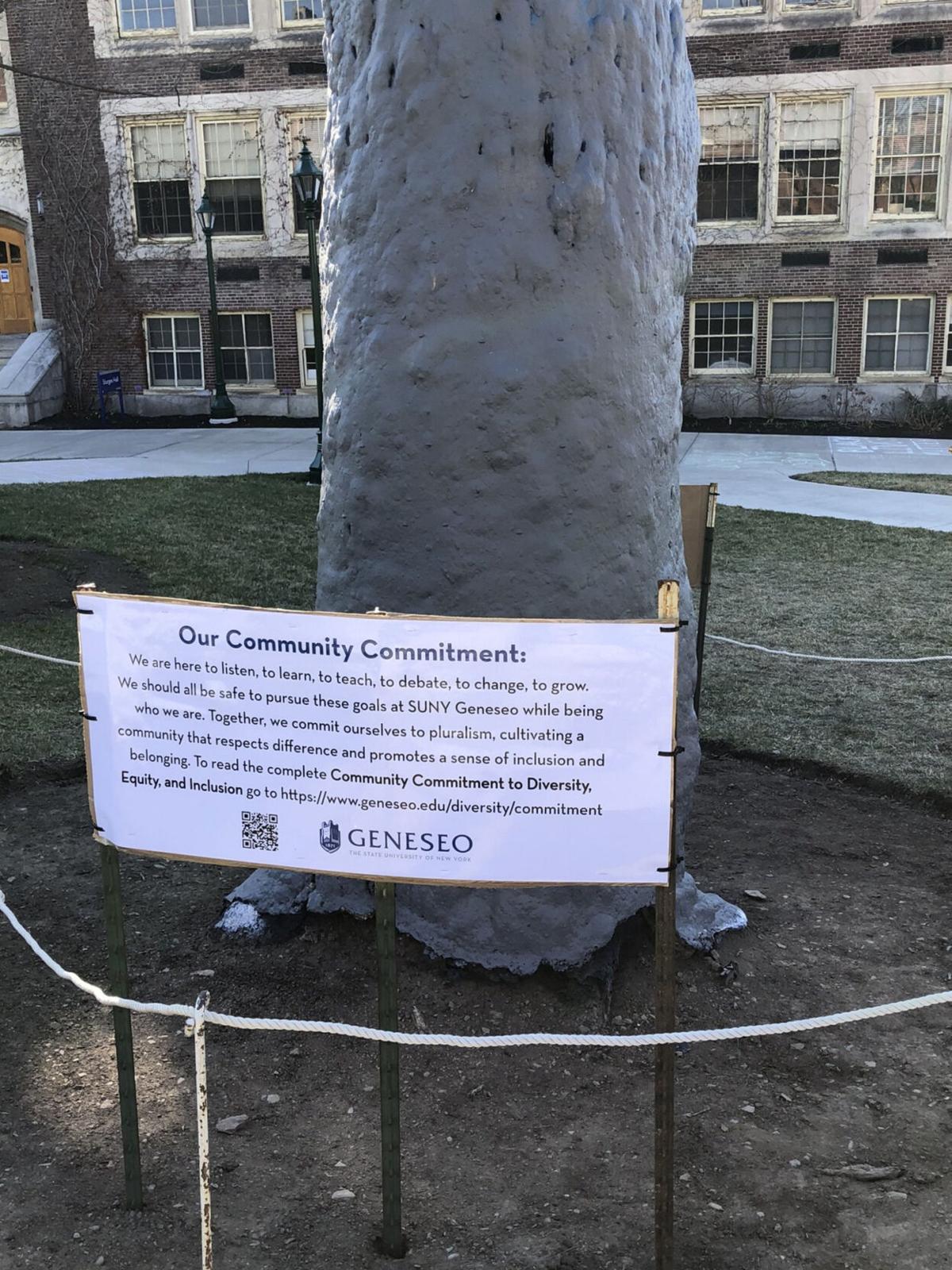 Matt Leader/Livingston County News After junior Owen Stevens painted over messages of support for the Black Lives Matter movement on the college’s Greek tree with patriotic messages last week, the college painted the tree gray and put in place a temporary moratorium on the painting of the tree.

Photo courtesy of Owen Stevens SUNY Geneseo junior Owen Stevens poses for a photo next to the college’s Greek tree in Sturges Quad. Last week, Stevens painted over messages of support for the Black Lives Matter movement that previously adorned the tree. The act has sparked controversy at the college, which has put in place a temporary moratorium on the repainting of the tree and a rock elsewhere on campus that also acts as a de facto public canvas.

Matt Leader/Livingston County News After junior Owen Stevens painted over messages of support for the Black Lives Matter movement on the college’s Greek tree with patriotic messages last week, the college painted the tree gray and put in place a temporary moratorium on the painting of the tree.

GENESEO – A SUNY Geneseo student who has clashed with the college and fellow students in recent weeks over comments he made on Instagram has retained counsel from a conservative legal aid association and is considering taking legal action against the college.

According to reporting from The Daily Wire, a conservative media company, the college suspended junior history education major Owen Stevens from mandatory in-school field experiences earlier this year after it became aware of videos posted to Instagram in which, among other things, Stevens praised Christopher Columbus, stated his belief that there are only two genders and mocked different gender identities.

Stevens, who is originally from Hemlock and graduated from Livonia High School in 2018, provided records to the County News that show that prior to his suspension, the interim dean of the college’s school of education said Stevens’ Instagram posts “do not show respect for the inherent dignity and worth of individuals whose identity or culture falls outside of his own narrow view of acceptable norms.”

The interim dean said Stevens’ comments exemplified “negative and disrespectful... attitudes toward individuals, including students in schools and communities with whom” the college works and fail to “demonstrate a genuine interest in working with diverse students.”

According to The Daily Wire, the terms of Stevens’ initial suspension required him to complete a remediation plan that included taking down the Instagram videos, toning down his social media presence and attending school-sanctioned training. Stevens successfully appealed his suspension and was reinstated last month on the condition he review the state’s “Guidance to School Districts for Creating a Safe and Support School Environment For Transgender and Gender Nonconforming Students” documents and “self-monitor” his social media posts to “ensure that he presents himself in a professional manner,” The Daily Wire reported.

Stevens told The Daily Wire that, despite the lifting of his suspension, he still plans on taking legal action against SUNY Geneseo.

“This is a huge victory for us … but we need to push back so that destructive policies leave our universities,” Stevens said, according to The Daily Wire. “We are still planning legal action … The much larger issue is that the university will almost always back down in the face of negative media attention. Going the legal route will provide legal precedent in order to challenge their policies in court.”

While Stevens declined to comment for this article - “Lawyers won’t let me,” - he referred questions to the Alliance Defending Freedom, a non-profit legal aid society that, according to its website, “exists to keep the doors open for the Gospel by advocating for religious liberty, the sanctity of human life, freedom of speech, and marriage and family.”

In response to a request for comment from the County News, the ADF confirmed the organization was representing Stevens and provided the following statement attributed to him.

“Universities should be a market place of ideas, not an assembly line for one type of thought. Colleges should be focusing on educating future world leaders, not policing speech on social media. As a future teacher I am committed to teaching students how to think and not what to think. Clearly my university doesn’t hold these values based on their speech policing,” said Stevens in the statement. “Although they repealed the suspension after I filed an appeal, the damage has already been done. Further, they have not revised the policies that allow them to police and punish students’ speech in the first place. Thus, we’re exploring our next options to protect free speech for all students and ensure the marketplace of ideas remains open.”

“We do not comment on active or pending legal matters,” she said.

Stevens has been increasingly in the public eye since The Daily Wire first reported on his suspension. But even before that, he was known to many SUNY Geneseo students for his conservative views and willingness to espouse them publicly.

After a Black Lives Matter mural on the college’s Greek tree in Sturges Quad was painted over last November in red, white and blue paint and patriotic messages such as “God Bless the USA,” speculation swirled on campus that Stevens was the painter – a claim Stevens denied at the time during an interview with the County News and again Tuesday. To read past County News coverage of the incident and its aftermath, click here.

Just last week the tree, again adorned with images in support of the Black Lives Matter movement, was painted over with red and blue paint and dozens of “USAs.” This time, Stevens confirmed he’d painted over the tree and even posted a picture of himself posing next to it on his Instagram account.

“If we’re not allowed to speak our minds in the world and especially in America, I think we’re falling very short of what this country was founded on,” Stevens said during an interview with WGSU, FM-89.3, SUNY Geneseo’s student radio station.

He’s gained hundreds of followers on his personal Instagram account in recent weeks and even started a podcast, “Just Owen,” where he speaks about his Christian faith and conservative views and what he characterizes as the shortcomings of liberalism and institutions of higher education. To listen to the podcast, click here.

The heightened awareness has also brought other consequences.

Stevens told The Daily Wire that he received threats from fellow students after posting videos to his Instagram account. And just last week, after he painted over the Greek tree, Stevens said he was involved in a tense dispute with “a Black kid” near the intersection of Main and Center streets in the village.

Geneseo Police Chief Eric Osganian confirmed the April 2 incident. According to Osganian, a male approached Stevens, opened the passenger door to his vehicle while Stevens was in the driver’s seat and “began yelling racist slurs at him.”

“It appears that during this encounter the other male was the aggressor,” said Osganian. “Both ended up going their separate ways. There were no charges and I advised University Police of the encounter.”

After Stevens painted over the BLM messages with patriotic ones last week, the college painted the tree a drab gray, roped it off and put in place a temporary moratorium on the painting of the tree and a rock on the college’s north campus near Steuben Hall that, similar to the tree, has functioned as a de facto public canvas.

In an email to students after the most recent repainting, SUNY Geneseo President Denise Battles said the moratorium would remain in place until a previously announced committee tasked with developing a public art policy to govern “the creation and display of ongoing public art on our campus” released its recommendations.

“We will revisit the tree and rock painting once the committee charged to consider our protocols completes its review and its recommendations can be considered,” Battles wrote.

In an email Wednesday, a college spokesperson said the committee includes faculty, staff, students and alumni and that the college expects its recommendations “to be released before the end of the academic year.” The college’s academic year ends May 20. The spokesperson did not respond to a follow up question asking which specific faculty, staff, students and alumni comprise the committee.

A SUNY Geneseo student created an online petition April 1 calling for the college’s Student Association to be placed in charge of who gets to paint the tree and rock.

“As students are the ones painting the tree and the rock, it makes most sense for students to regulate this,” reads the petition. “The Student Association Executive Board has a director of student affairs who would most likely be the best person to regulate this. If the tree and rock can be regulated as soon as possible, people who choose to deface them will have to face the consequences of their actions, instead of getting away with it.”

The petition, which can be viewed online by clicking here, had garnered 165 signatures as of Wednesday afternoon.

The tree remained cordoned off this past weekend and a hastily erected sign placed next to it bore a message from the college.

“We are here to listen, to learn, to teach, to debate, to change, to grow. We should all be safe to pursue these goals at SUNY Geneseo while being who we are,” the sign read. “Together, we commit ourselves to pluralism, cultivating a community that respects difference and promotes a sense of inclusion and belonging.”

Nearby, hand drawn messages on pieces of paper and cardboard had been taped – presumably by students – to a more permanent sign explaining the history of the Greek tree.

“Tolerating racism is racism,” one of them read.

'Christopher Columbus is awesome and should be celebrated'