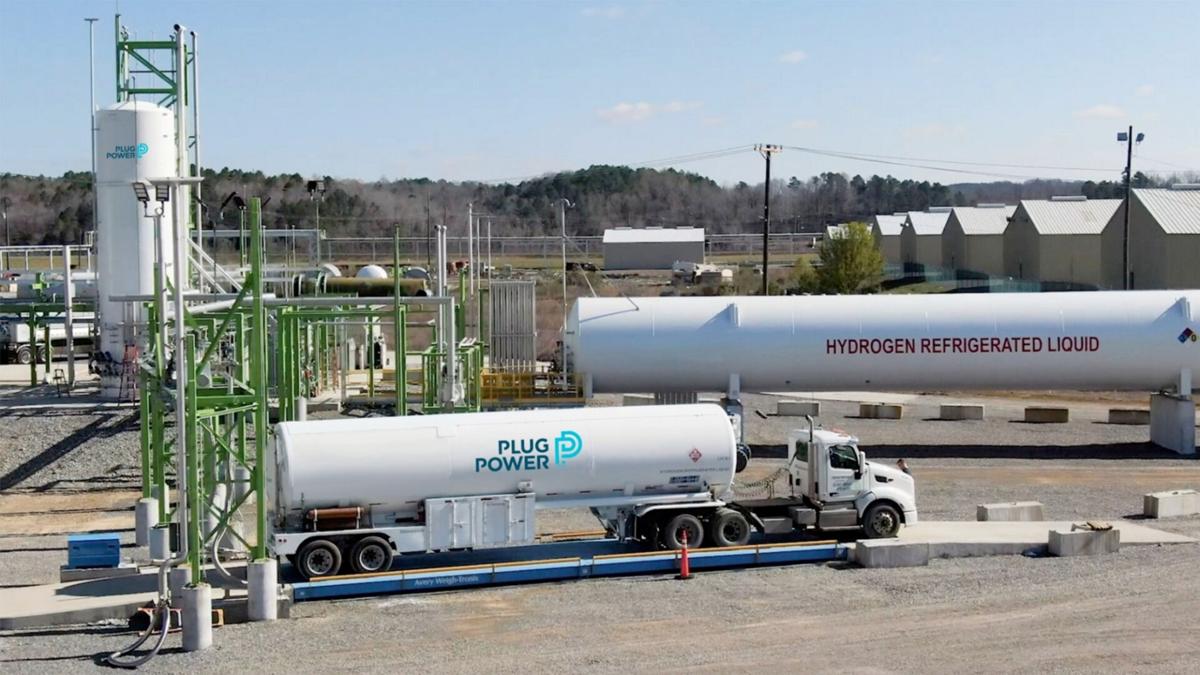 Photos courtesy of PlugPower An existing Plug Power hydrogen production facility, the same type of facility the company announced Thursday it would be constructing at the Science, Technology and Advanced Manufacturing Park in the town of Alabama, Genesee County. 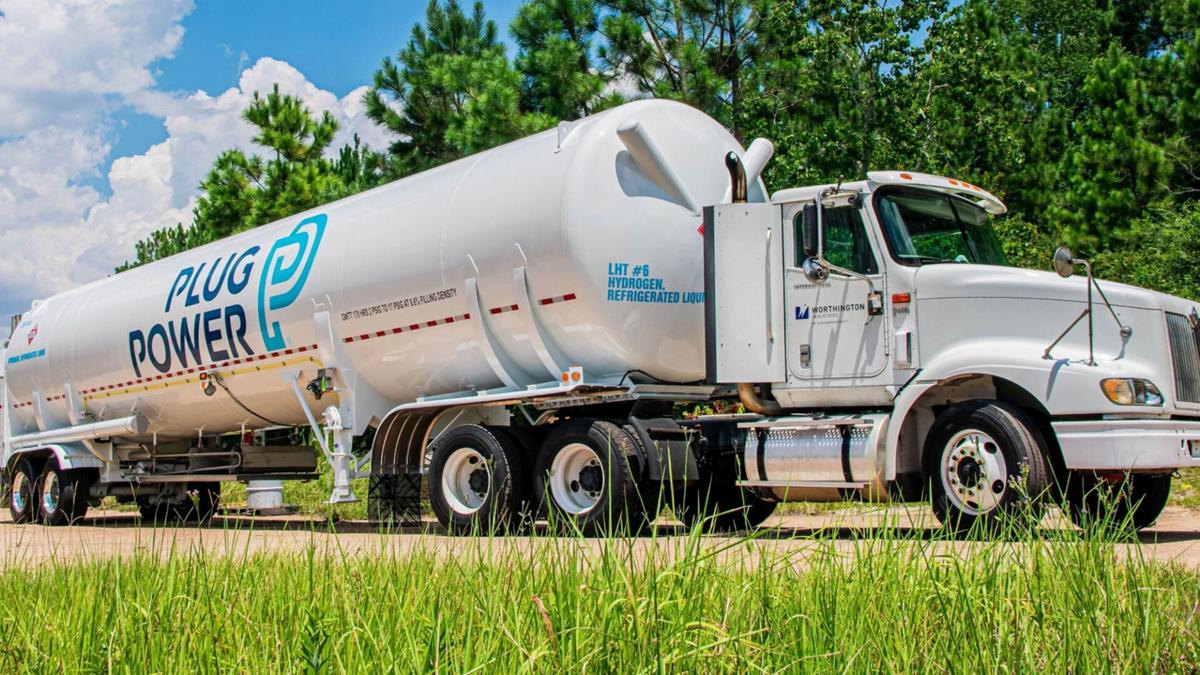 Photos courtesy of PlugPower An existing Plug Power hydrogen production facility, the same type of facility the company announced Thursday it would be constructing at the Science, Technology and Advanced Manufacturing Park in the town of Alabama, Genesee County.

ALABAMA – Plug Power Inc., a leading producer of hydrogen fuel cells and related infrastructure, announced late Thursday that it plans to construct a $290 million liquid hydrogen production facility at the Science, Technology and Advanced Manufacturing Park in the town of Alabama.

“Plug Power’s future rightfully revolves around building the green hydrogen economy,” said Andy Marsh, CEO for Plug Power, which was founded in Albany County in 1997. “We are grateful that our home state of New York is helping lead the way on climate and clean energy initiatives and that Plug Power’s green hydrogen solutions can make such a positive impact on the environmental and economic climates in the state.”

The project would be the first for the what is locally known as the STAMP site. The manufacturing park has been in development since 2007 and in recent years been mentioned as a candidate for several high-profile projects, most recently Samsung and Amazon. An earlier project withdrew in 2018 before breaking ground.

In addition to Plug Power’s manufacturing facility, which the company said would be the largest green hydrogen production facility in North America, the project includes the construction of a 450-megawatt electrical substation that will service the entire Science, Technology and Advanced Manufacturing Park.

In a press release Thursday, Gov. Andrew Cuomo said the substation could support potential future expansion of the facility “as well as future growth opportunities at the business park” in general.

Such volume would allow the company, which counts Amazon, BMW and Walmart among its clients, to offer pricing to its transportation fuel customers that’s competitive with diesel, it said.

While Plug Power didn’t announce a timeline for the project, state Assemblyman Steve Hawley, R-Batavia, said the company was planning on breaking ground on the facility “this summer.”

“Plug Power has committed to creating 68 jobs at the new production facility which will pay an average salary of $70,000 with benefits,” Hawley continued. “...This facility will use state-of-the-art techniques to create clean energy that will be used throughout the country, and I am hopeful it is the first of more job-creating projects to come for the STAMP site.”

The project will receive state and local incentives from the New York Power Authority, Empire State Development and Genesee County.

Potential incentives through the NYPA, which are subject to approval by the New York Power Authority Board of Trustees next month, include a 10-megawatt allocation of low-cost hydropower from the Niagara Power Project, $1.5 million from the Western New York Power Proceeds program and 143 megawatts of high-load factor power that NYPA will procure for Plug Power on the energy market.

According to the governor’s office, Empire State Development will provide up to $2 million in Excelsior Tax Credits in exchange for job creation commitments. Genesee County will provide additional local tax incentives, pending various approvals by the Genesee County Economic Development Center. Additional details on the nature of those local incentives were not available by press time Thursday.

Steve Hyde, president and CEO of the Genesee County Economic Development Center, hailed the company’s announcement in a statement Thursday and said the STAMP site has been the subject of “significant interest among advanced manufacturing companies across the globe.”

“The economic benefits of this proposed development at STAMP also underscores how this project contributes to New York State’s leading role in mitigating climate change,” Hyde continued. “Plug Power is an international leader in manufacturing clean hydrogen which can significantly reduce air emissions and in the process create good paying jobs for our community and region.”

Alabama Town Supervisor Robert Crossen said he was encouraged by the interest that various advanced manufacturing companies, including Plug Power, have shown in the STAMP site and town of Alabama.

“We have worked very hard to bring forward a site suitable for a project of this scale,” said Crossen, “and we look forward to achieving the important steps to develop and advance this project in our community.”

This latest announcement from Plug Power comes a few weeks after the company unveiled plans to construct a “gigafactory” in the town of Henrietta, Monroe County, that it said would bring 377 new jobs to the area.

Matt Hurlbutt, president and CEO of Greater Rochester Enterprise, said once it’s up and running, the liquid hydrogen produced at Plug Power’s Alabama plant will support operations at its planned facility in Henrietta.

Plug Power’s liquid hydrogen production facility would be the first tenant at Genesee County’s STAMP site, which comprises some 1,250 acres of build-ready parcels near the intersection of routes 77 and 63.

The Plug Power project must still be presented to the GCEDC board, with other details and agreements yet to be finalized.

The history of the STAMP site goes back to 2006 when New York State began a search to identify sites for large-scale manufacturing parks that would target up-and-coming technology. In 2007, the STAMP site in the town of Alabama was identified as a location that could provide for such a park. Site design followed and in 2014 infrastructure design, engineering and construction launched with the allocation of $33 million by New York state.

A previous project, 1366 Technologies was poised to be the park’s first tenant when the company and GCEDC officials announced on Oct. 7, 2015, plans for a $700 million solar manufacturing facility on 105 acres of the 1,250-acre park. At the time of the announcement, the project had planned to break ground in 2016 and be completed in 2017 or 2018.

But in 2018, with ground not broken, the Massachusetts-based company withdrew the project after efforts to secure a $150 million federal Department of Energy loan were withdraw. The loan request, which dated back to 2011 and the project’s earliest stages, had not progressed within the agency. The uncertainty of the federal request spurred the company decision to withdraw and seek to develop the project overseas, the company’s CEO said at the time in a statement to The Daily News.

GCEDC officials acknowledged at the time disappointment in the company’s decision, while noting marketing changes in the industries the park was targeting and the risks in capitalizing such costly projects.

The 1366 Technologies project did provide a catalyst for infrastructure development at the park, which has been the subject of significant speculation in recent weeks after reports in the Wall Street Journal that it was one of five sites in the United States that Samsung Electronics Co. was considering for a new semiconductor plant. The Journal reported in January that the South Korean electronics manufacturer was considering an investment of as much as $17 billion to build a chip-making factory in Arizona, Texas or New York. The newspaper cited documents it had viewed and people familiar with the company’s plans.

A similar report by The Hill put the investment at up to $13 billion.

In addition to its proximity to the state’s high-tech corridor by the New York State Thruway, the STAMP site is attractive due to its low energy costs. Jim Krencik, director of marketing and communications for GCEDC, said energy prices at the STAMP site are as low as $0.03 per kilowatt-hour.

The site has often been mentioned as a potential location for large facilities or regionally significant economic development projects. In August 2020 for example, the site was cited when reports surfaced that a developer for retail giant Amazon was looking at locations for a regional distribution center and warehouse in Genesee and Orleans counties. The STAMP site is already designed and permitted for construction, with tens of millions of dollars of infrastructure work completed and continuing. “With this support, STAMP has achieved significant site readiness milestones through completion of major site and infrastructure pre-project requirements,” Hyde, the GCEDC CEO, previously told The Daily News. “These milestones, along with the Buffalo-Rochester Metro Corridor’s abundant talent and low-cost electricity, have enabled increased attractiveness for large scale economic development projects interested in the expansive footprint and robust utility capacities available at STAMP.”