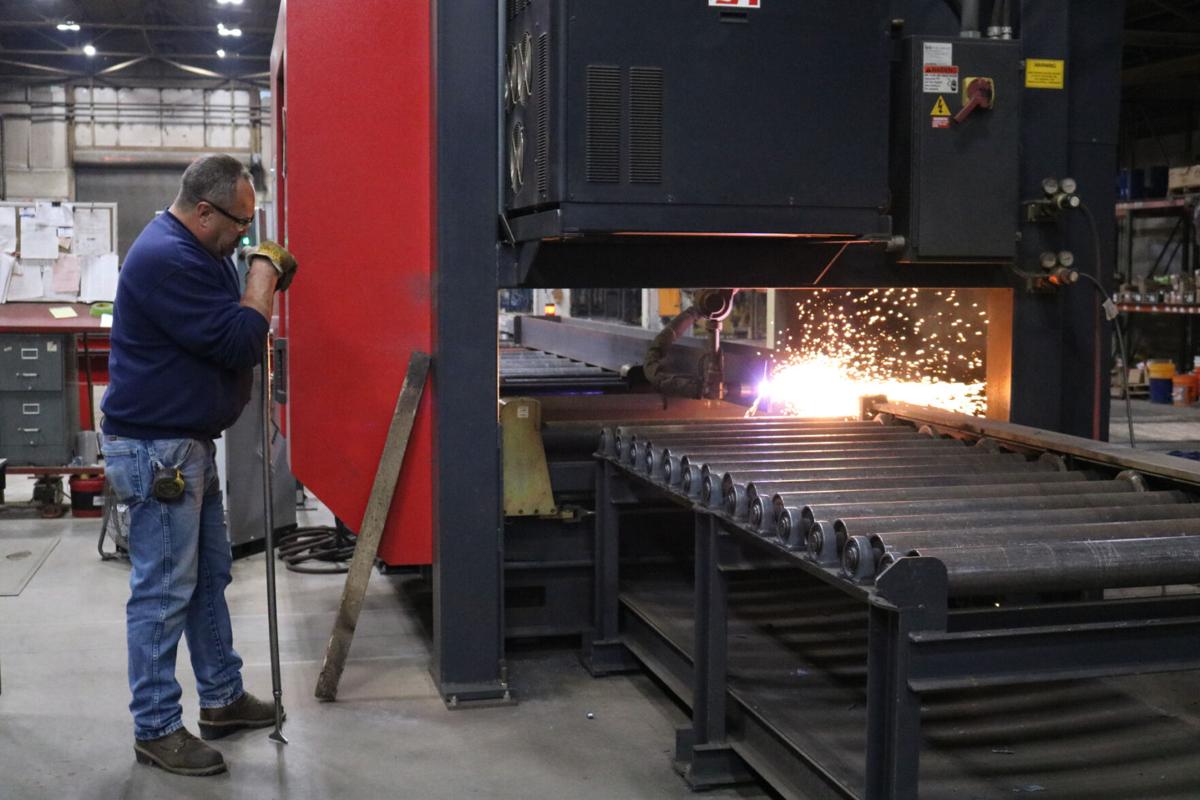 Sparks fly. Each of the 71 gantries took about 11 weeks for 70 LMC Industrial Contractors employees to fabricate. The gantries now form the backbone of the New York State Thruway’s new,cashless tolling system. 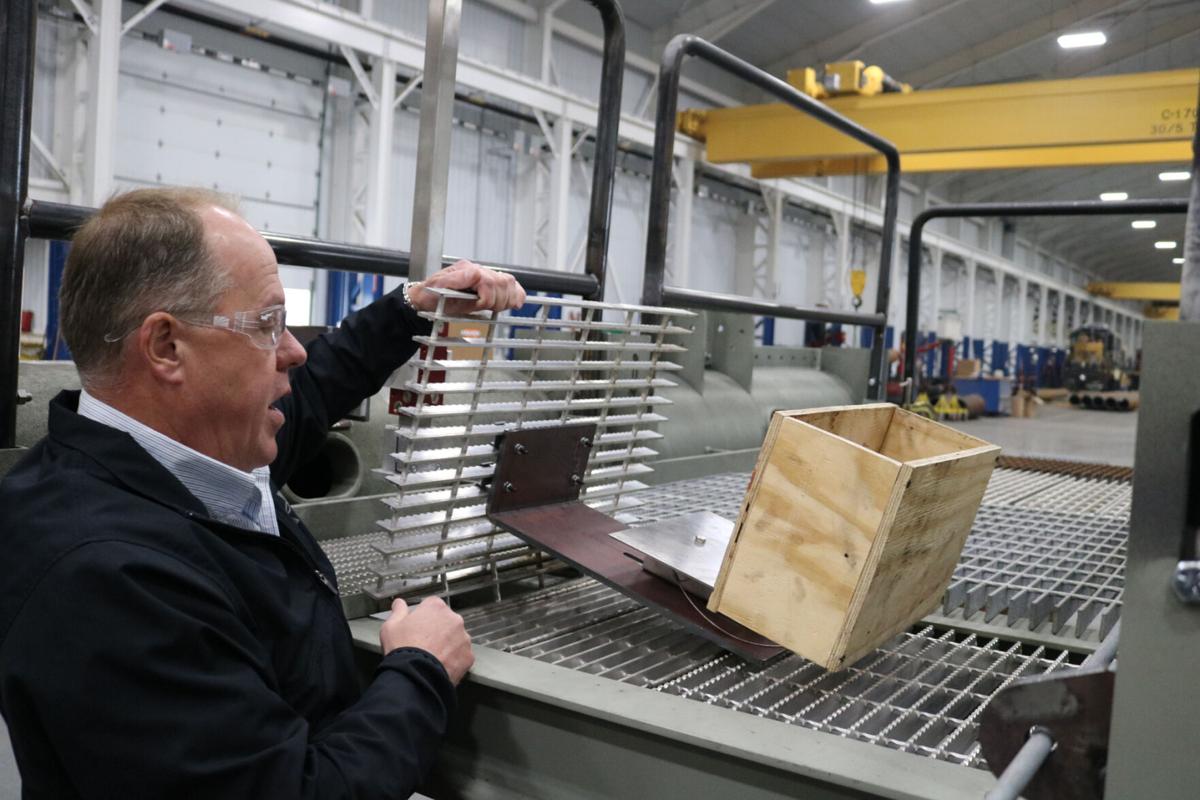 Matt Leader/Livingston County NewsJeff Holley, LMC Industrial Contractors’ vice president of operations, shows an ease of access feature on one of the 71 gantries the company fabricated that now form the backbone of the New York State Thruway’s cashless tolling system. 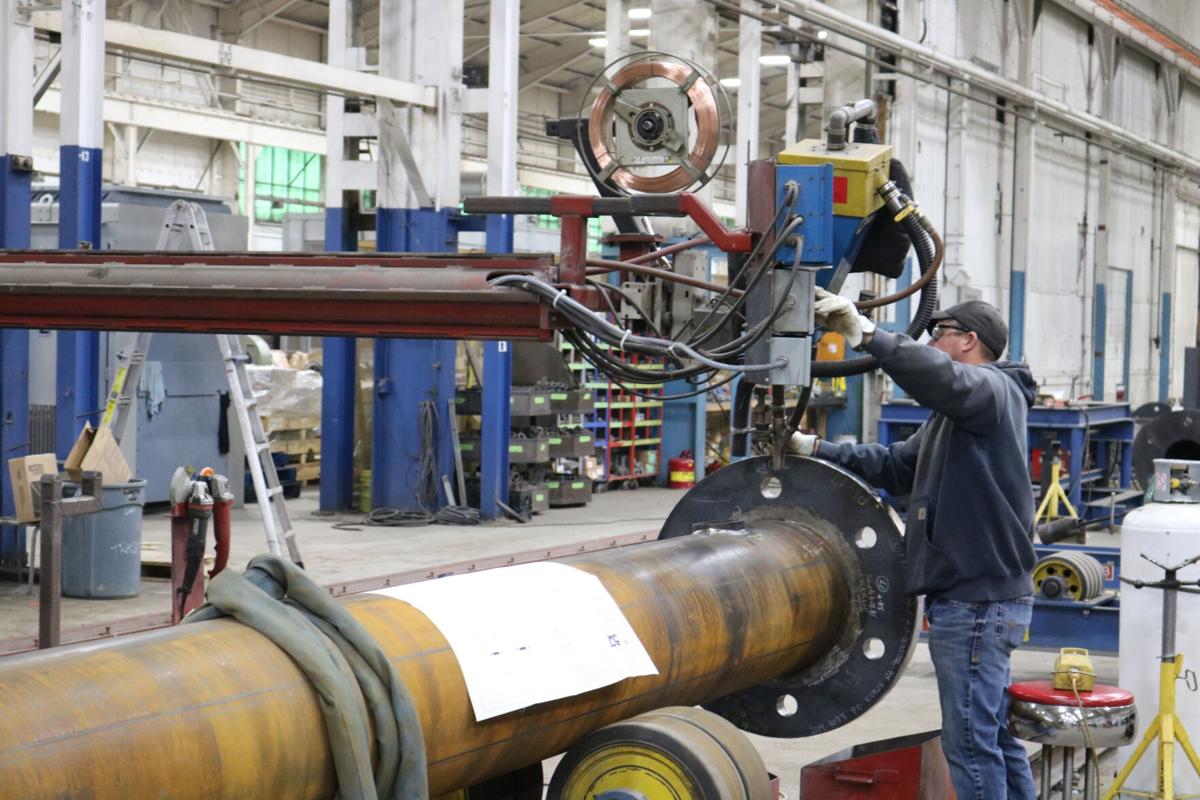 Some of the 70 or so LMC Industrial Contractors employees that worked on the company’s New York State Thruway gantry project. 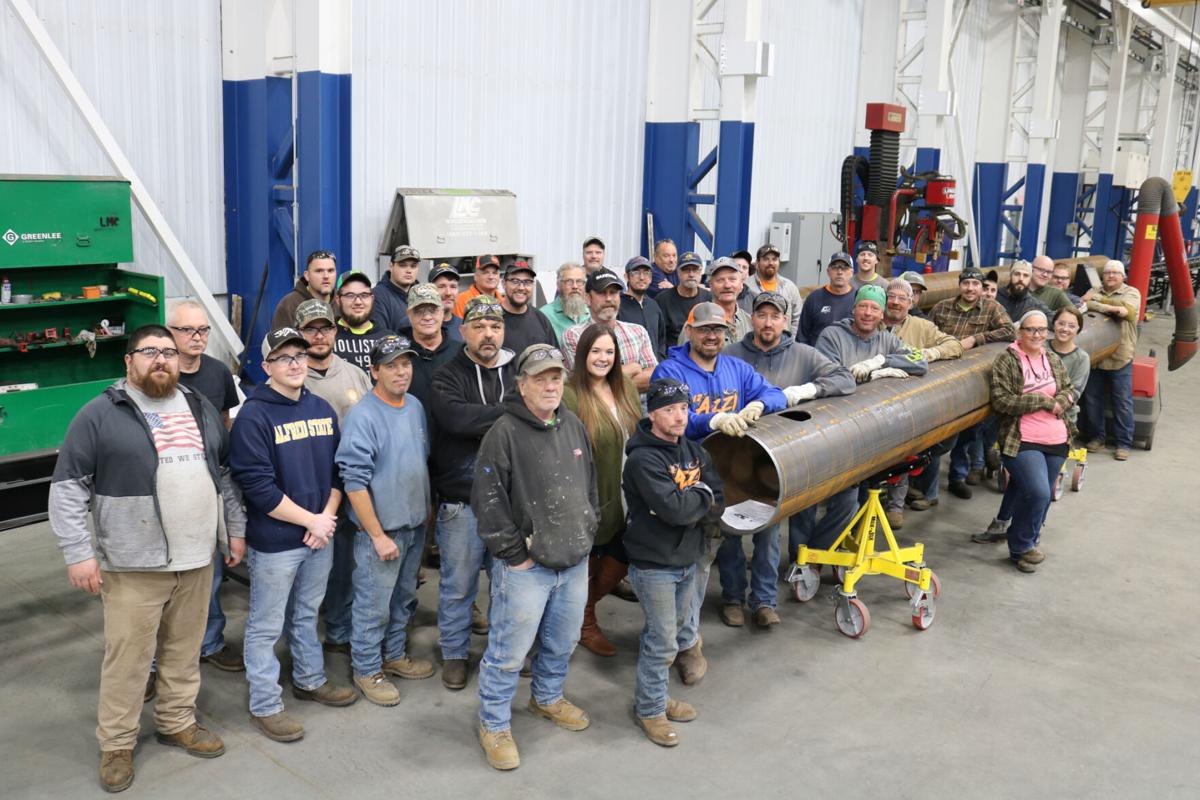 Matt Leader/Livingston County News Some of the 70 or so LMC Industrial Contractors employees that worked on the company’s New York State Thruway gantry project. 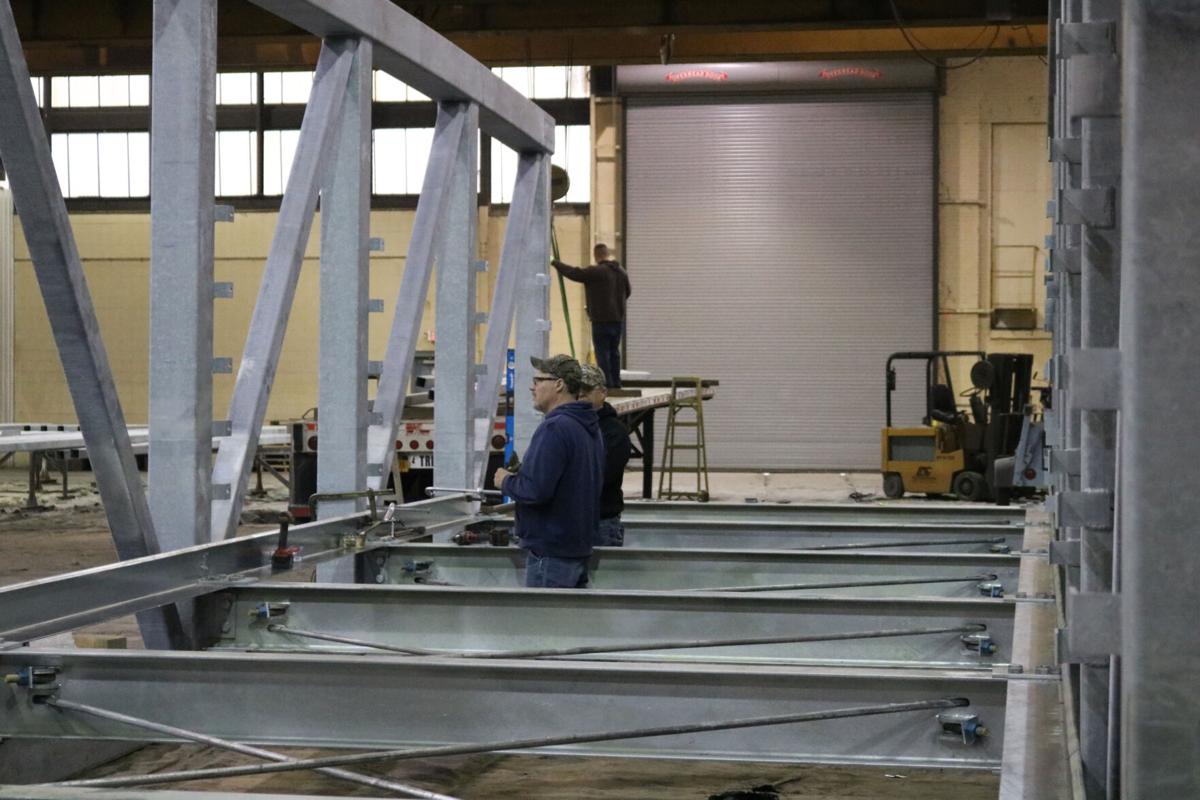 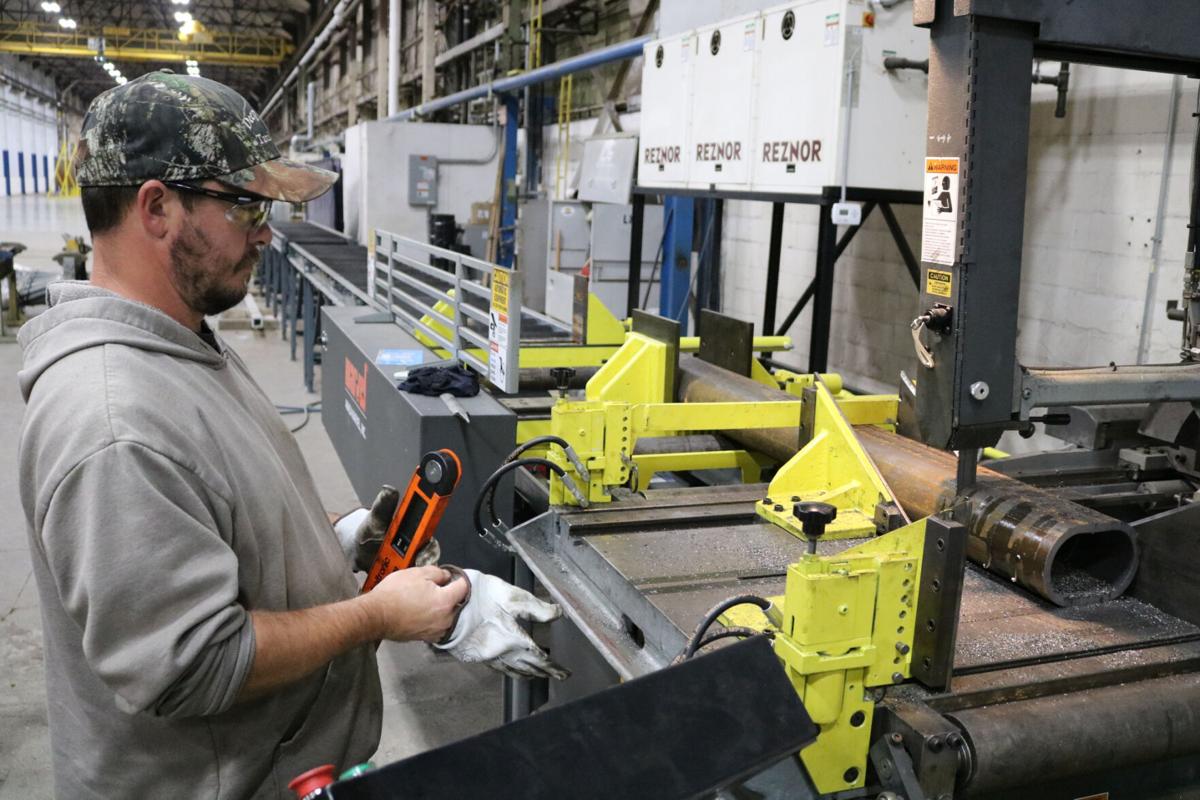 Sparks fly. Each of the 71 gantries took about 11 weeks for 70 LMC Industrial Contractors employees to fabricate. The gantries now form the backbone of the New York State Thruway’s new,cashless tolling system.

Matt Leader/Livingston County NewsJeff Holley, LMC Industrial Contractors’ vice president of operations, shows an ease of access feature on one of the 71 gantries the company fabricated that now form the backbone of the New York State Thruway’s cashless tolling system.

Some of the 70 or so LMC Industrial Contractors employees that worked on the company’s New York State Thruway gantry project.

Matt Leader/Livingston County News Some of the 70 or so LMC Industrial Contractors employees that worked on the company’s New York State Thruway gantry project.

NORTH DANSVILLE –When it comes to products that transcend the confines of this small corner of the world, Livingston County-based businesses have a few claims to fame. All the sugar packets used at Dunkin’ Donuts locations, for instance, are packaged at Sweetners Plus in Lakeville. Every scoop of Cool Whip plopped atop a slice of pumpkin pie or apple crisp starts out at the Kraft-Heinz plant in Avon.

With the opening of the New York State Thruway’s cashless tolling system this past weekend, Livingston County added another claim to the list.

That’s because the giant, tube steel gantries - all 71 of them – that form the backbone of the new, cashless system were fabricated at LMC Industrial Contractors in North Dansville.

The gantries stand 22 feet tall and between 58 and 150 feet wide. They span both east- and westbound lanes of traffic and bristle with all the cameras, sensors and other equipment necessary to detect the presence of vehicles below and automatically levy the appropriate tolls without the need for pull-up booths.

LMC was notified in June 2019 that it’d been awarded the gantry contract. If started fabrication in October of last year and, on July 31 of this year, finished fabrication of its 71st and final gantry. When all was said and done, the gantries took nearly 3.5 million lbs of steel to construct.

According to Jeff Holley, LMC’s vice president of operations, 36 of the gantries fabricated by the company are what are called mainline gantries, meaning they were installed at different points along the thruway, not at entry or exit. The remaining 35 are road-tolling gantries, which are installed at entrances and exits and differ in design and componentry from the mainlines gantries.

Each gantry took about 11 weeks to finish, said Holley, and involved the work of some 80 employees. In all, counting those that work out of its North Dansville facility and in the field, LMC employs about 650 people, said Holley.

Speaking during an interview at LMC’s North Dansville location late last year, Holley declined to comment on the specific dollar value of the gantry contract beyond saying it was in the “millions of dollars.”

“This is the largest structural steel job we’ve had to date at LMC,” he added.

LMC was founded by current owner and president Larry Mehlenbacher and two partners in 1982 as a small, mechanical contractor specializing in piping work, said Holley.

“LMC’s very first job was the Kraft Food facility in Avon,” Holley said. “There was a large addition that went in in the early 80s. That was LMC’s job, to do that work.”

In 2005, long after his two partners had retired, Mehlenbacher purchased the former Foster Wheeler facility off Interstate 390 in the town of North Dansville. The 650,000-square-foot facility became LMC’s primary base of operations, replacing its original facility on Lakeville Road in Avon.

Mehlenbacher’s hope in purchasing the facility, said Holley, was to transform LMC from a small mechanical contractor doing work for hospitals, schools and food companies into a fully-fledged energy company, ready to insert itself into the rapidly expanding natural gas industry in Pennsylvania and across the U.S.

The gamble paid off and LMC now pulls about 70 percent of its business from the oil and gas industry, said Holley. It does a lot of natural gas pipeline and compressor station work, said Holley and, apart from electrical and some specialized insulation work, handles all aspects of its contracts in-house.

The company’s thruway project can be traced to a 2010 decision to branch out into the structural steel fabrication industry, specifically bridge construction and rehabilitation, as a means of diversifying its operations. The decision was an easy one, said Holley, because LMC’s bread and butter energy business already required a significant degree of capability in the space.

“That’s what brought the structural group along and started building it up was we were trying to support our own efforts in the energy business,” he said.

In 2013, following millions of dollars of investments that included the purchase of the hugely expensive equipment needed to handle the large pieces of steel necessary for bridge building, LMC became an American Institute of Steel Construction, or AISC, certified steel fabricator, which allowed it to construct intermediate bridges.

“An intermediate bridge just means you can do town, county, some smaller interstate highway bridges,” Holley explained. “What I can’t do is go out here and build this huge bridge that goes across this river because the steel size, members are too huge. It’s nothing we have the capability of doing in our shop.”

After gaining the certification, the company got its feet wet by focusing on pedestrian bridges.

Visitors to the Buffalo Naval Park at Canalside in Buffalo will be familiar with the company’s work as the area features two pedestrian bridges fabricated by LMC.

The company also does a lot of pedestrian bridges for rails to trails projects across the state.

“That’s a big thing for the governor,” Holley said. “They want more walking paths and there’s tons of new trails being built all over the place in order to get over some of these little creeks and streams. There’s just a ton of these little tiny pedestrian bridges that are everywhere.”

In 2019, LMC was approached by a consortium of contractors - “This job was so big that one contractor couldn’t really do all the work, so three contractors formed an LLC to basically do this job,” - that was quoting New York’s cashless tolling project that Holley said was “right up our alley.”

And while proving the company is capable of handling such a prolific and high-profile contract is nice, the real impact of LMC’s gantry project is in the people it kept on the job in North Dansville, said Holley.

Cashless tolling to start ahead of schedule

ALBANY — Cashless tolling on the Thruway is here, and more than a month ahead of schedule.