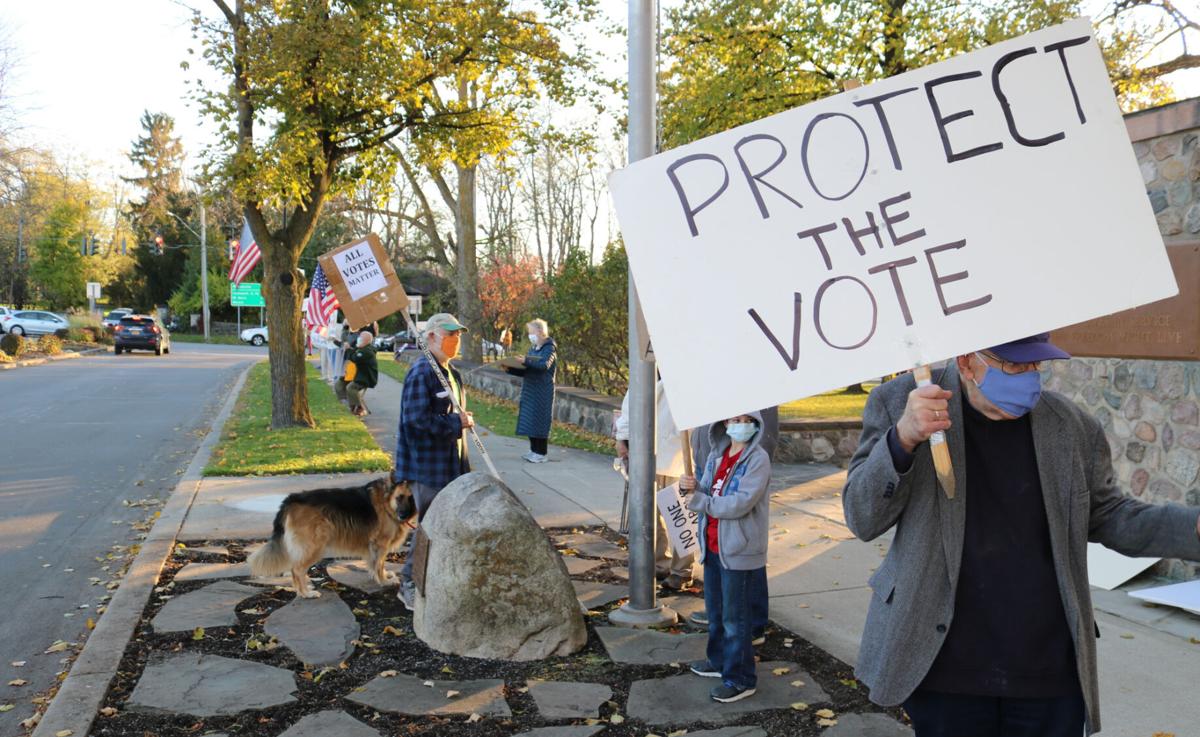 Brendan McDonough/Livingston County News About a dozen people gathered in Geneseo on Nov. 4 for a rally that called on leaders to “protect the vote.” The rally was among some 170 that took place across the national at the urging of a national group called “Protect the results.” 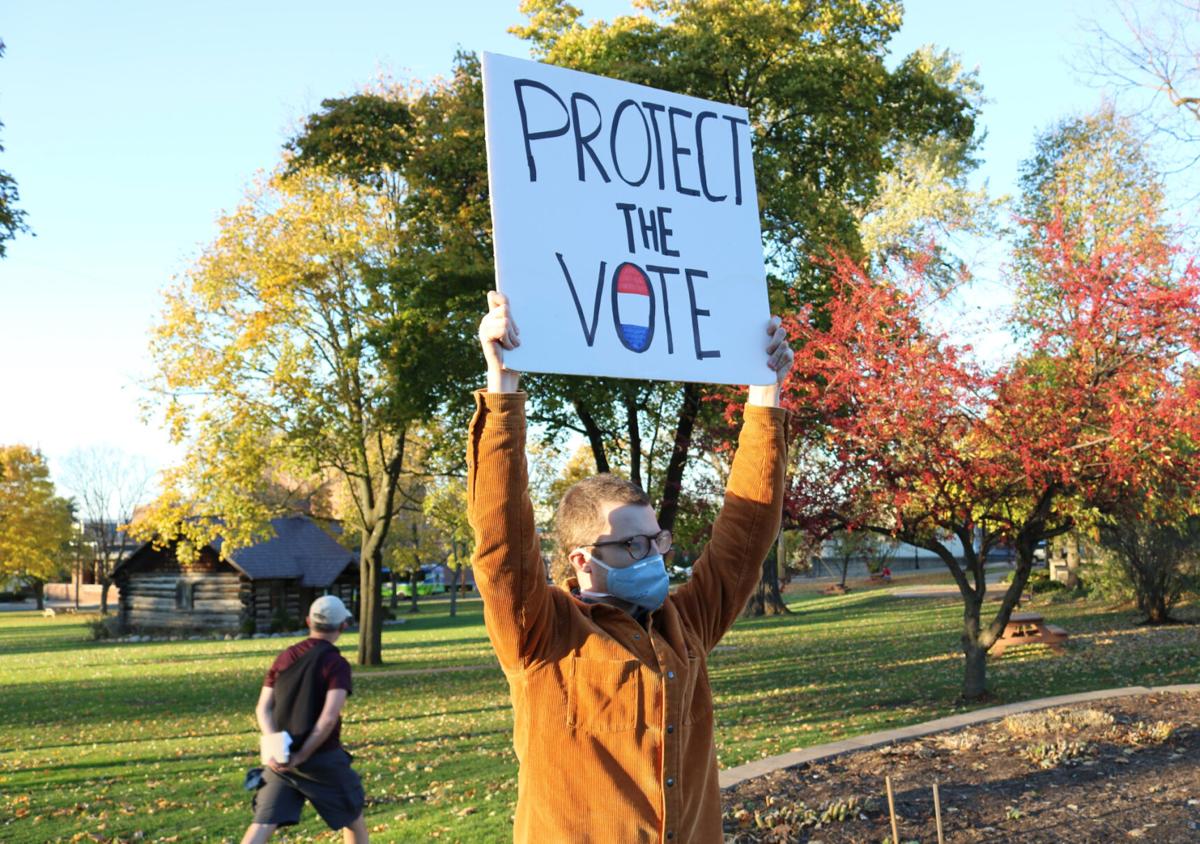 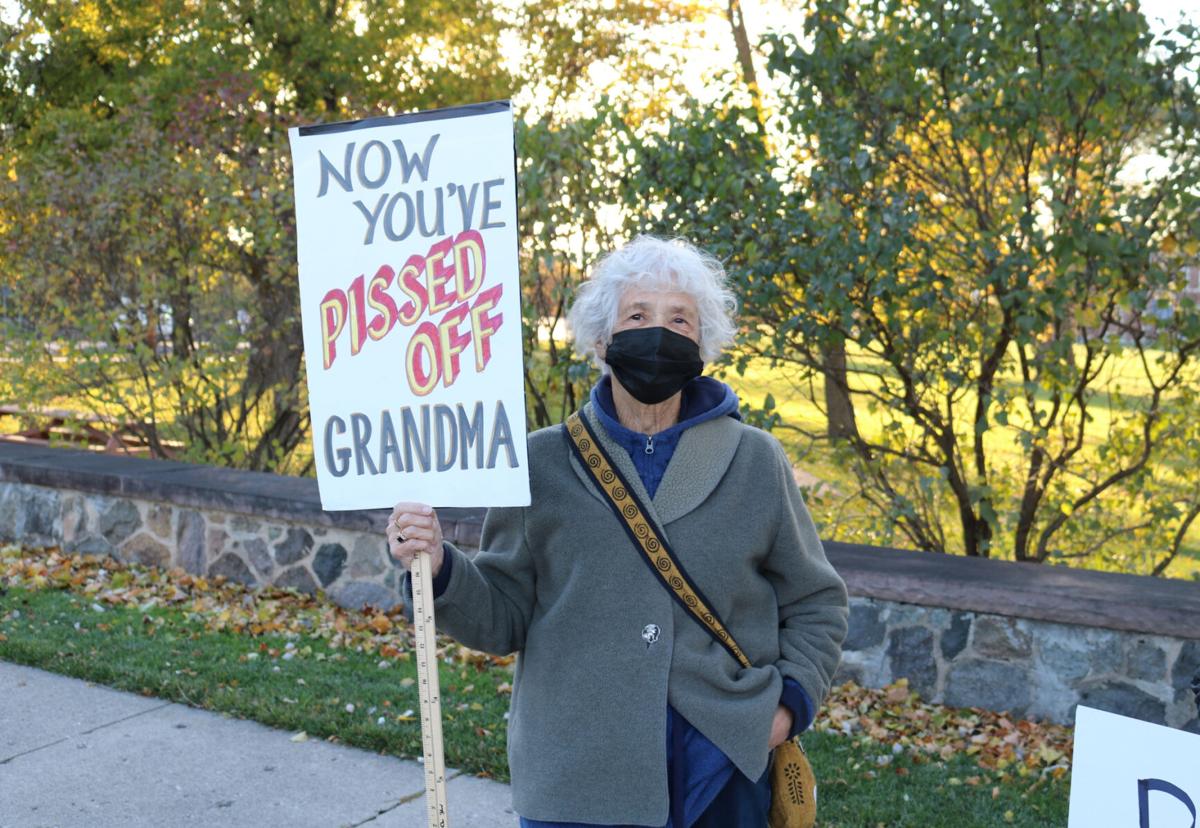 Brendan McDonough/Livingston County News About a dozen people gathered in Geneseo on Nov. 4 for a rally that called on leaders to “protect the vote.” The rally was among some 170 that took place across the national at the urging of a national group called “Protect the results.”

GENESEO – People of all ages lined one side of the village’s Main Street at Route 20A – a historical marker recognizing the “Village Square” nearby – holding signs that proclaimed “Protect the Vote” as counting of ballots entered a second day in many states as the outcome of the presidential election remained uncertain.

“We are just trying to make sure that the powers in charge know that the people should be the ones to decide the results of the election,” said organizer Chris Norton.

Protesters in Geneseo and at other similar events nationwide were responding to President Donald Trump’s claim in a 2 a.m. speech that counting all legally cast ballots was “a fraud on the American public.” Trump falsely claimed that he had won the election even as millions of Americans’ ballots had yet to be counted.

Some 170 rallies took place Wednesday across the nation at the urging of a group called Protect the Results, a national pro-democracy group aimed at protecting people’s liberties.

“We just want to make sure that the election results are counted and respected,” said Norton.

One of those protesting was Geneseo resident William Sutor. He said it is now more important than ever to make sure his rights and the rights of all Americans are protected.

“The idea that we should just stop counting votes when it favors one side is utterly ridiculous. I would like our society to continue to have fair and free elections,” said Sutor.

From the very old to the very young, people of all ages came out to take part in the protest. One of those was Sandra Condry who came from Scottsville.

“I am a pissed off grandma,” she said, holding a sign that matched her sentiment. “I think it is so important to protect the vote.”

Condry saw the gathering as an opportunity to take a stand for older Americans like her.

Also taking a stand was Sandra Nix who said she came out to represent all women.

For student Awab Shawkat, taking part in the rally was so important that he skipped a class to attend the event. The event meant more to him than just holding a sign. It was also important for protecting the vote and the rights of his fellow gay and lesbian friends.

“There have been a lot of reforms that are targeting same sex discrimination at the work place and are being passed at the state level. This week predicts the next four years and is it going to be another four years of shrinking person’s rights,” said Shawkat.

Student Jess Rivera also wants her rights protected. This election, she said, it was the COVID-19 pandemic not the elected officials that prevented her friends from heading to the ballot box.

“Just getting people to start pushing and remembering that we need to keep our government accountable. I know a lot of people due to health and safety concerns they are not able to get their voices heard and that is something that is a shame,” said Rivera.

Organizers said they don’t have any additional protests planned in the future but many said whether in a group or by themselves they would keep standing up to protect their rights and their votes.

“I think a lot of people feel that their voices are not being heard,” said Sutor, “and I think it is one way, in addition to voting, to make their voices heard.”

Sandra Condry came all the way from Scottsville to take part in the protest. She saw it as an opportunity to take a stand for older Americans like her.