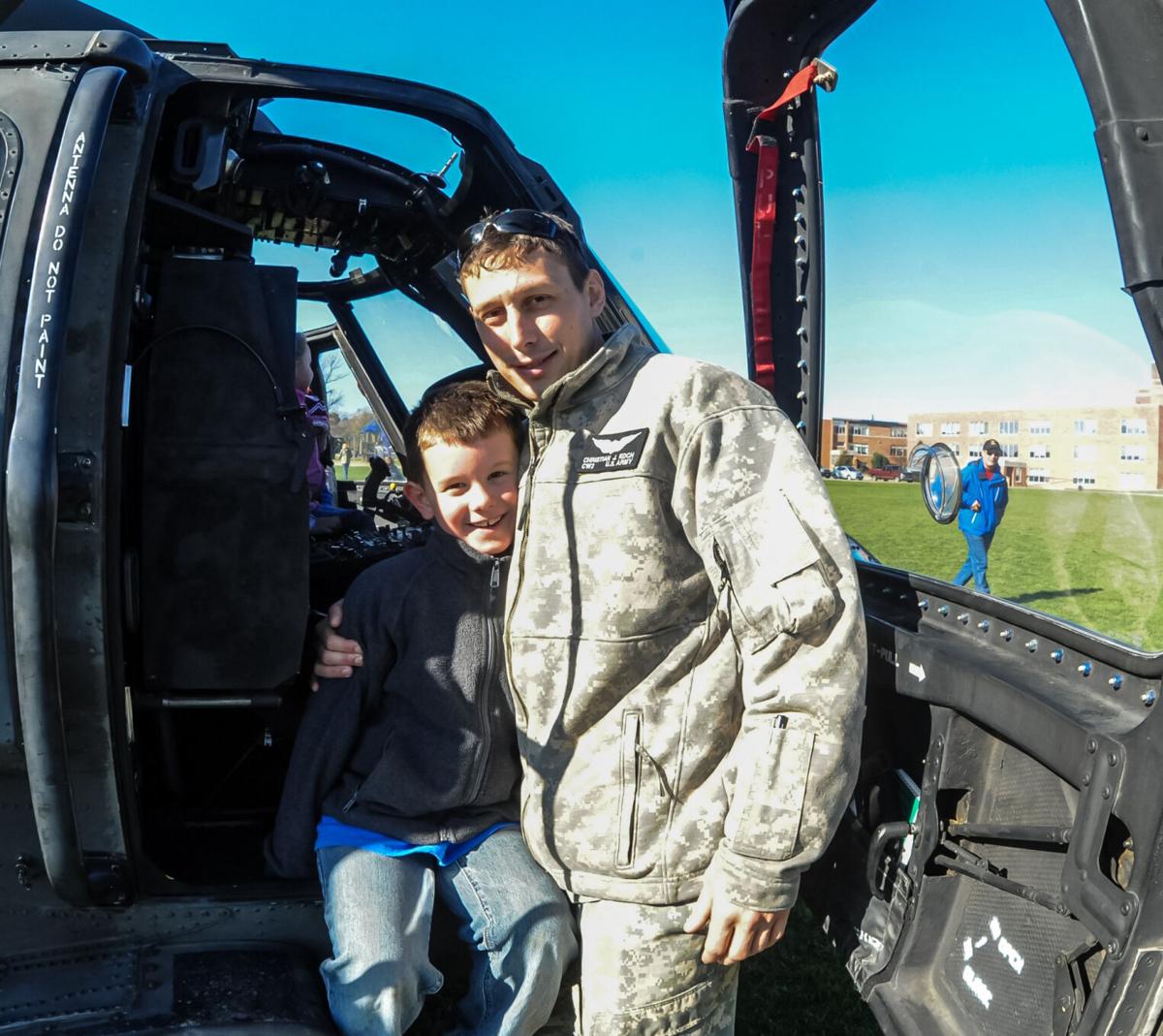 Livingston County News File PhotographChristian Koch is shown with his nephew after landing a Blackhawk helicopter at York Central School during a veterans celebration on Nov. 10, 2010. 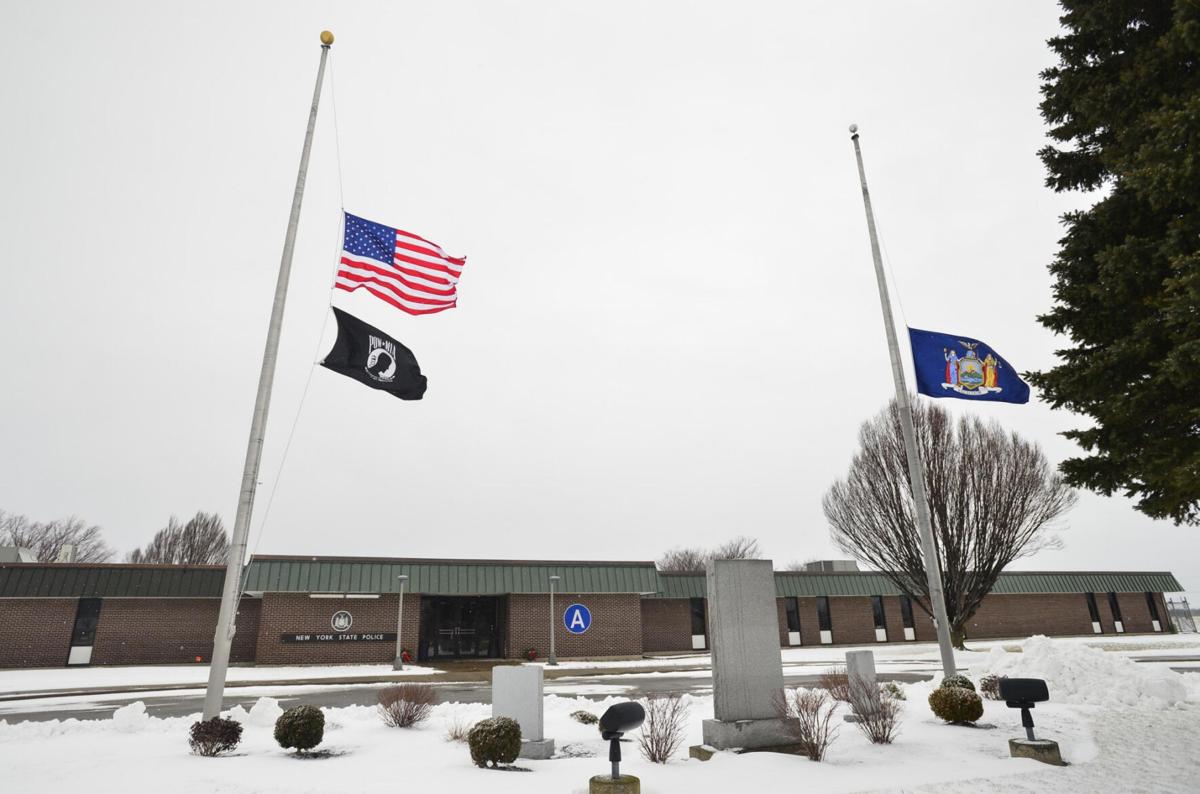 Mark Gutman/Daily NewsFlags flew at half mast Friday morning at State Police Troop A Headquarters in Batavia, in honor of Christian Koch and two other National Guard soldiers who died in Wednesday’s helicopter crash. 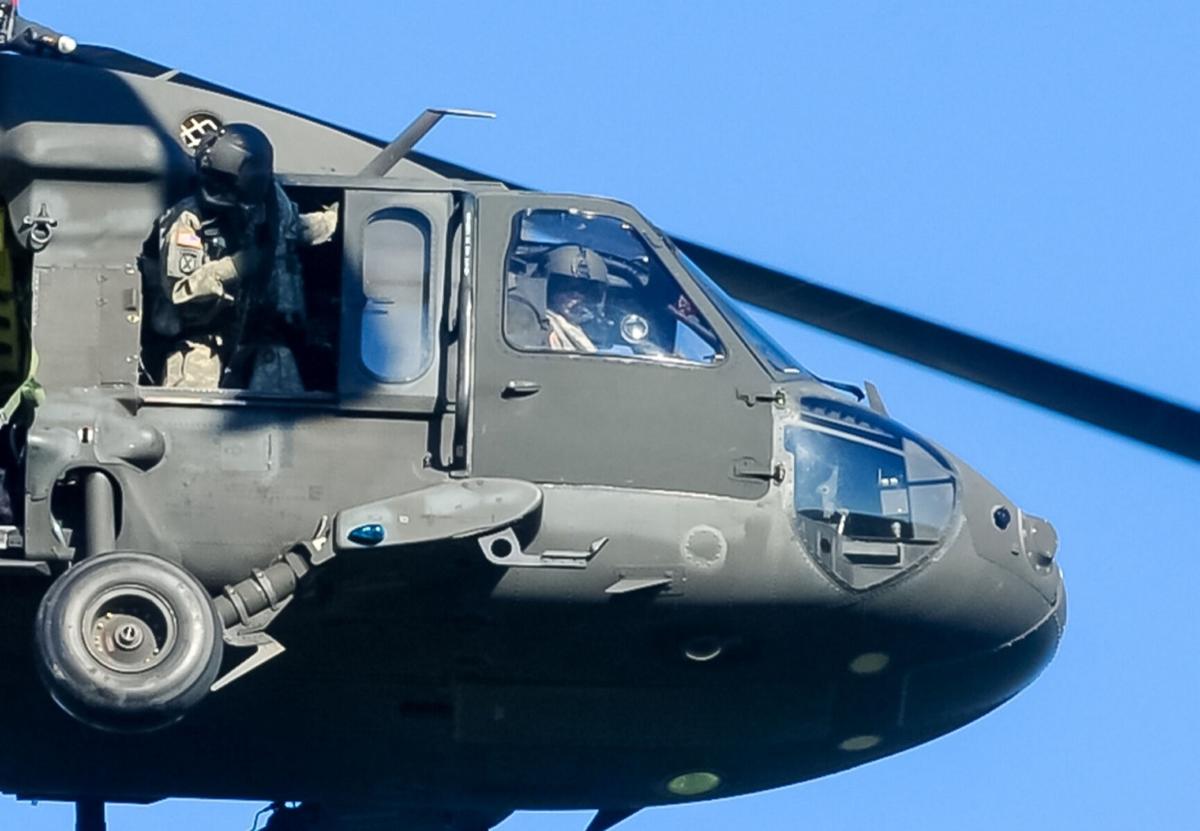 Christian Koch pilots a Blackhawk helicopter during a veterans celebration at York Central School on Nov. 10, 2010. 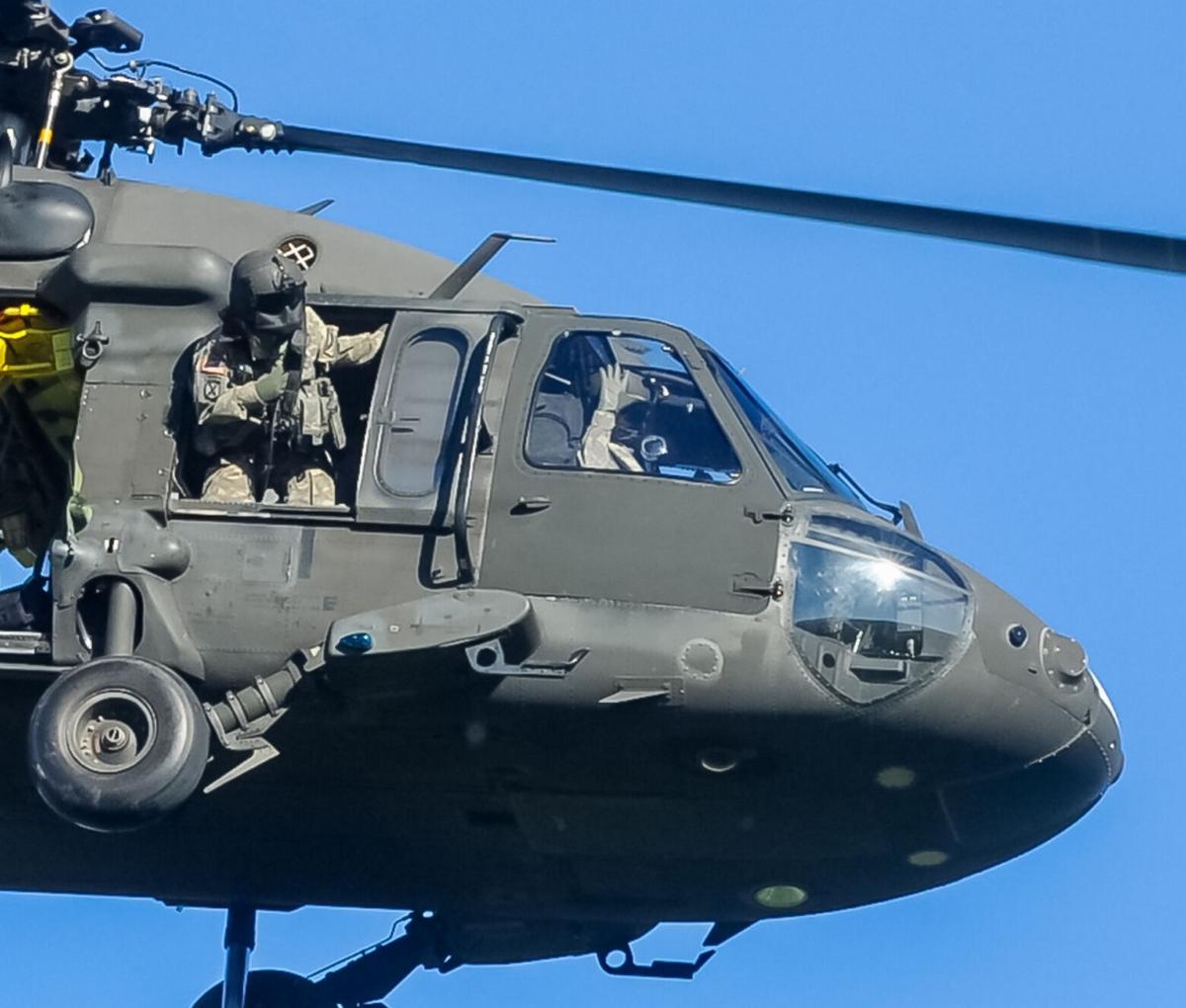 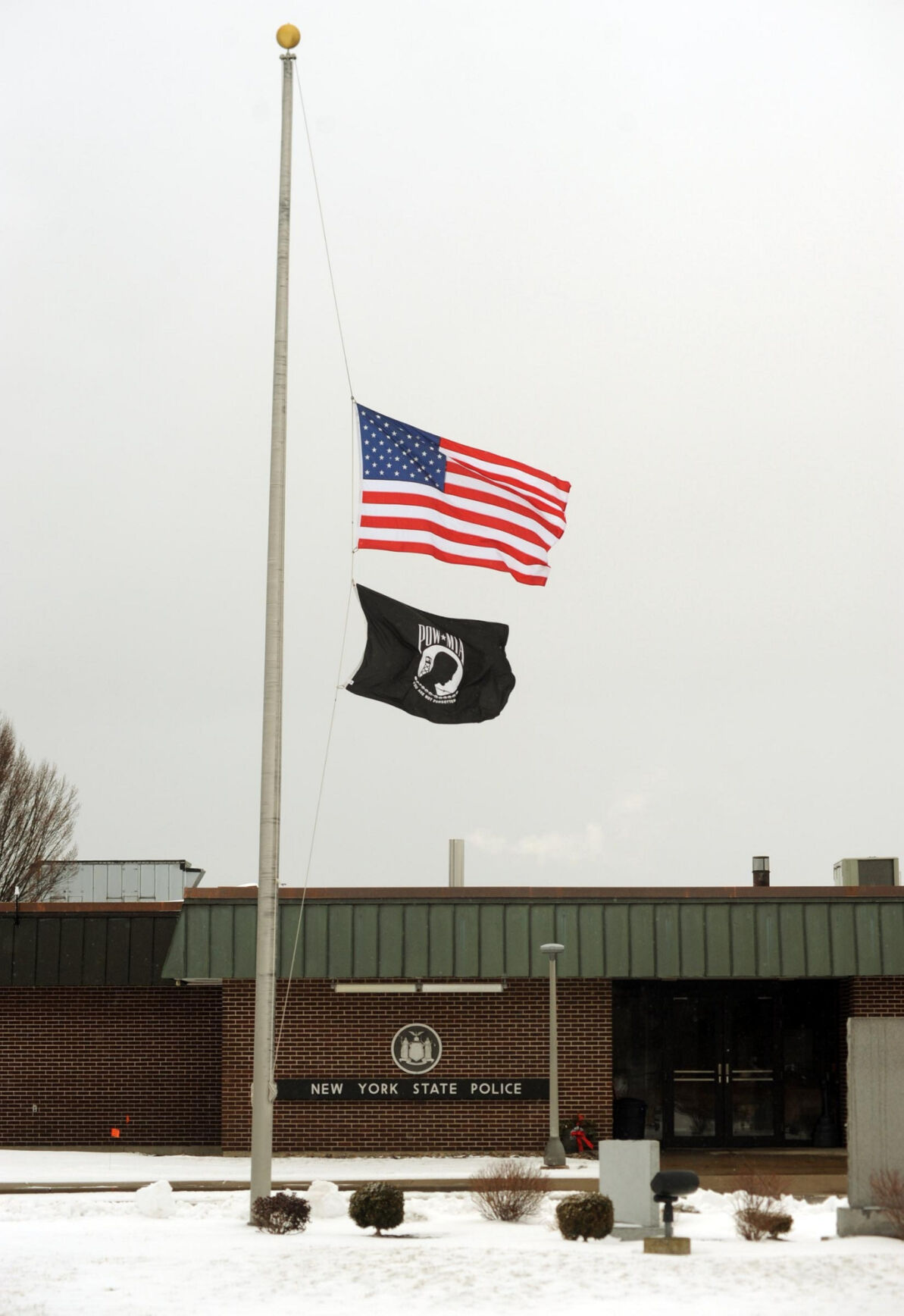 Flags flew at half mast Friday morning at State Police Troop A Headquarters in Batavia, in honor of Christian Koch and two other National Guard soldiers who died in Wednesday’s helicopter crash.

Livingston County News File PhotographChristian Koch is shown with his nephew after landing a Blackhawk helicopter at York Central School during a veterans celebration on Nov. 10, 2010.

Mark Gutman/Daily NewsFlags flew at half mast Friday morning at State Police Troop A Headquarters in Batavia, in honor of Christian Koch and two other National Guard soldiers who died in Wednesday’s helicopter crash.

Christian Koch pilots a Blackhawk helicopter during a veterans celebration at York Central School on Nov. 10, 2010.

Flags flew at half mast Friday morning at State Police Troop A Headquarters in Batavia, in honor of Christian Koch and two other National Guard soldiers who died in Wednesday’s helicopter crash.

A York Central School graduate who was honored for helping rescue an 11-year-old boy from a ravine in Wyoming County last year, was one of three National Guard soldiers killed in a helicopter crash Wednesday night,

Christian Koch, 39, was piloting the UH-60 Blackhawk helicopter when it crashed in a field along West Bloomfield Road in Mendon, Monroe County.

Koch, of Honeoye Falls and formerly of Avon and Caledonia in Livingston County, was killed along with Steven Skoda, 54, and Daniel Prial, 30, both of Rochester, according to the state Division of Military and Naval Affairs, which identified the soldiers on Friday.

“These soldiers were a part of our National Guard family and we mourn their loss, alongside their family members and loved ones,” Col. Richard Goldenberg, the New York National Guard public affairs officer, said in a statement. “The New York National Guard will be there for these family members as they navigate these trying times. Our chaplains and casualty assistance officers will be with them whenever needed. Our service members wish to extend their heartfelt thanks to the members of law enforcement, first responders and the community at large for their support and sympathy during this trying time.”

Koch was a chief warrant officer 4 and a 20-year veteran of New York Army National Guard. He also worked as a civilian pilot for the State Police.

It was in his role with State Police that Koch, along with other first responders, was honored in November 2020 by the Red Cross with the Heroism Through Teamwork Award for the harrowing rescue of an 11-year-old boy who had fallen down a ravine in Middlebury.

The boy had been hiking with family when he tumbled down a steep ravine.

Koch was called to pilot a State Police helicopter, which hovered 300 feet above the boy. The boy was attached to a cable and hoisted from the ravine. He suffered a broken leg and other injuries but has recovered.

A life of service

Koch was a 1999 graduate of York Central School. In 2010, he returned to the school for an early Veterans Day program on Nov. 10, and landed a Blackhawk helicopter on a back practice field — an event that people still remember excitedly. He was accompanied by a half-dozen other York Central alumni who spent the day with students, and led tours of the helicopter and other Army vehicles before the helicopter departed from the field in the afternoon.

In 2016, Koch joined thousands of Guardsmen for a month-long training exercise at the Army’s Joint Readiness Training Center in Fort Polk, La.

Koch had been a pilot for State Police since March 2016. In addition to a pilot and crew member on many rescue and search missions, Koch also served as a division unit trainer, instrumental in the last year conducting annual training for division pilots.

“The New York State Police thank him for his service to his country, and to the people of the State of New York,” the agency said in a statement.

Koch is survived by his wife and four children.

The first was created by Koch’s sister-in-law, Aimee Koch, on GoFundMe.com.

“On January 20, 2021 Christian was sadly taken from his wife, children, family and community in the service of our Nation,” Aimee Koch wrote in the fundraiser’s description. “Christian leaves behind his wife Teressa, children Addison and Everett, and step children to whom he was a ‘bonus dad’ Talia and Ari as well as his loving extended family. Please help us to recognize his sacrifice and provide for the family.”

The other fundraiser was created by Sasha Milner on MealTrain.com. The fundraiser had raised more than $4,800 of its $5,000 goal as of Friday evening. To access the MailTrain fundraiser, go to https://tinyurl.com/y5bp2tbh.

In a statement Friday, Assemblywoman Marjorie Byrnes, R-Caledonia, said there “are no words” that fully express the deep sadness Wednesday’s crash has wrought in the community.”

“Our grief extends to Christian’s hometown of York, former home of Caledonia and throughout Livingston County where he was so active, and across our entire state. Our hearts break thinking of their families and the incredible sacrifice they have now made,” said Byrnes, whose 133rd Assembly District includes Livingston County and the town of Mendon, where the crash occurred.

“All of these men deserve our deepest, most grateful honors and thanks because they chose a life of service, not only to serve in our military through the New York National Guard but, in Christian’s case also through a life of service in our State Police,” Byrnes said. “It is truly remarkable and devastating for us all to lose such an extraordinarily civic-minded person. We thank him, and his family, for his service. It will not be forgotten.”

Wednesday’s crash is under investigation by an Army safety investigation team that began arriving Thursday from the Army Safety Center at Fort Rucker, Ala., to begin its analysis of the accident. The team will gather all relevant data and evidence to use during its investigation from before, during, and after the accident.

The team will investigate the potential human, materiel and environmental factors that may have caused or led to the accident.

The UH-60 medical evacuation helicopter the three men were piloting was on a routine training mission when it crashed about 6:30 p.m. Wednesday in a field along West Bloomfield Road near Cheese Factory Road.

The helicopter was assigned to C Company of the 1st Battalion, 171st General Support Aviation based at the Army Aviation Support Facility in Rochester. The unit trains to perform aeromedical evacuation and the crew had been conducting night vision goggle proficiency training in the local area.

“The service members were more than just service members. They are members of our hometown community. They live among us. They work among us. And they perform duties and professional responses that a lot of people choose not to do,” Monroe County Sheriff’s Office Chief Deputy Michael Fowler said during a Thursday press conference.

When emergency crews arrived on scene the helicopter was on fire, Baxter said.

Those responding then attempted life saving measures, Baxter said, and instituted a grid search with a state police helicopter to find anyone on that aircraft or in the area.

“Once we recognized the life saving measures wouldn’t be successful, we immediately moved to secure the scene and begin the difficult process of recovering those heroes,” Fowler said Thursday. “That effort went on for several hours with a lot of cooperation from other first responders. The medical examiner’s office took the lead and worked hand-in-hand with New York Army National Guard to ensure the process was done in the most respectful and most dignified manner we could possibly perform in a difficult situation like this.”

Fowler said a large area has been secured to protect the crash scene.

Baxter said Wednesday the debris field extends “over what I’d describe as a few city blocks,” or hundreds of feet in each direction from the crash site.

“This is a heavy, heavy burden upon all of us,” Baxter said “These are our freedom providers ... just showing again that freedom is not free. We lost three great Americans today in the service of our country.”

Gov. Andrew Cuomo directed that flags on all state buildings be lowered to half-staff in honor and in tribute to the soldiers.