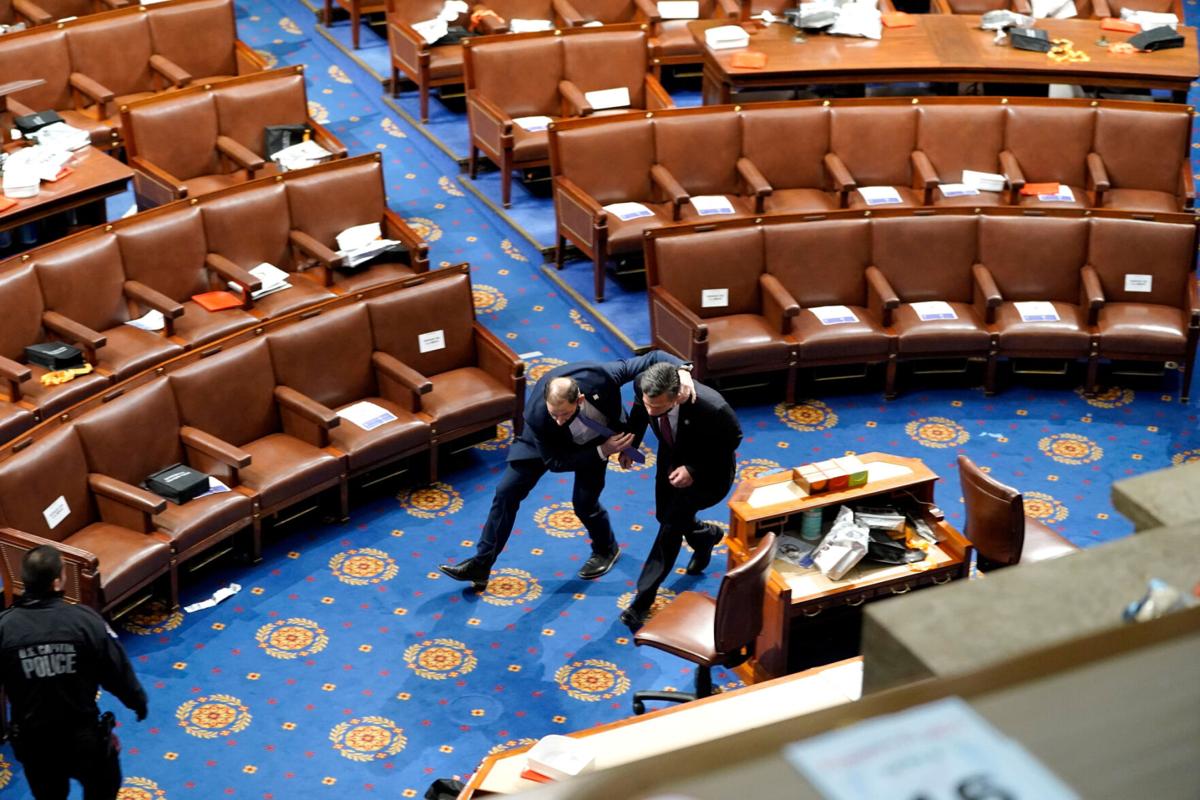 Courtesy of Tribune News Service Members of Congress run for cover as protesters try to enter the House Chamber during a joint session of Congress on Jan. 6, 2021 in Washington, D.C. 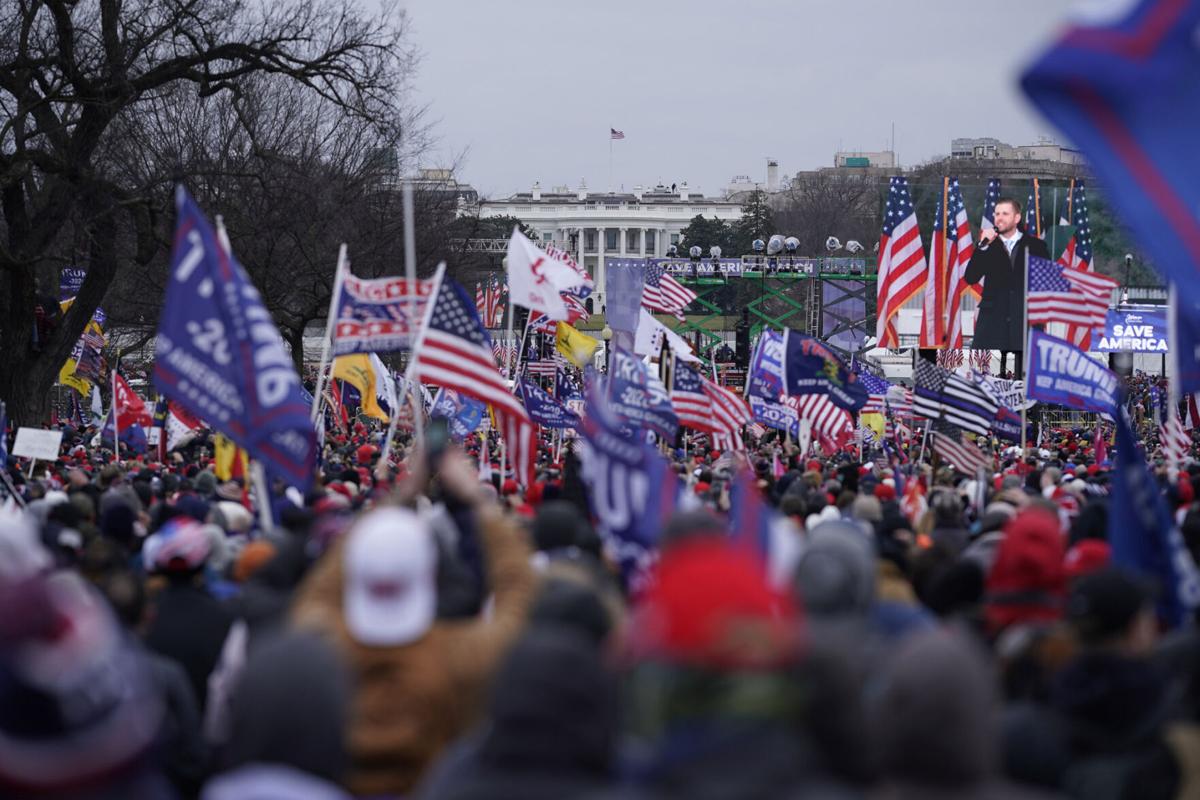 Protesters gather on the second day of pro-Trump events fueled by President Donald Trump's continued claims of election fraud in an attempt to overturn the results before Congress finalizes them in a joint session of the 117th Congress on Wednesday, Jan. 6, 2021, in Washington, D.C. (Kent Nishimura/Los Angeles Times/TNS) 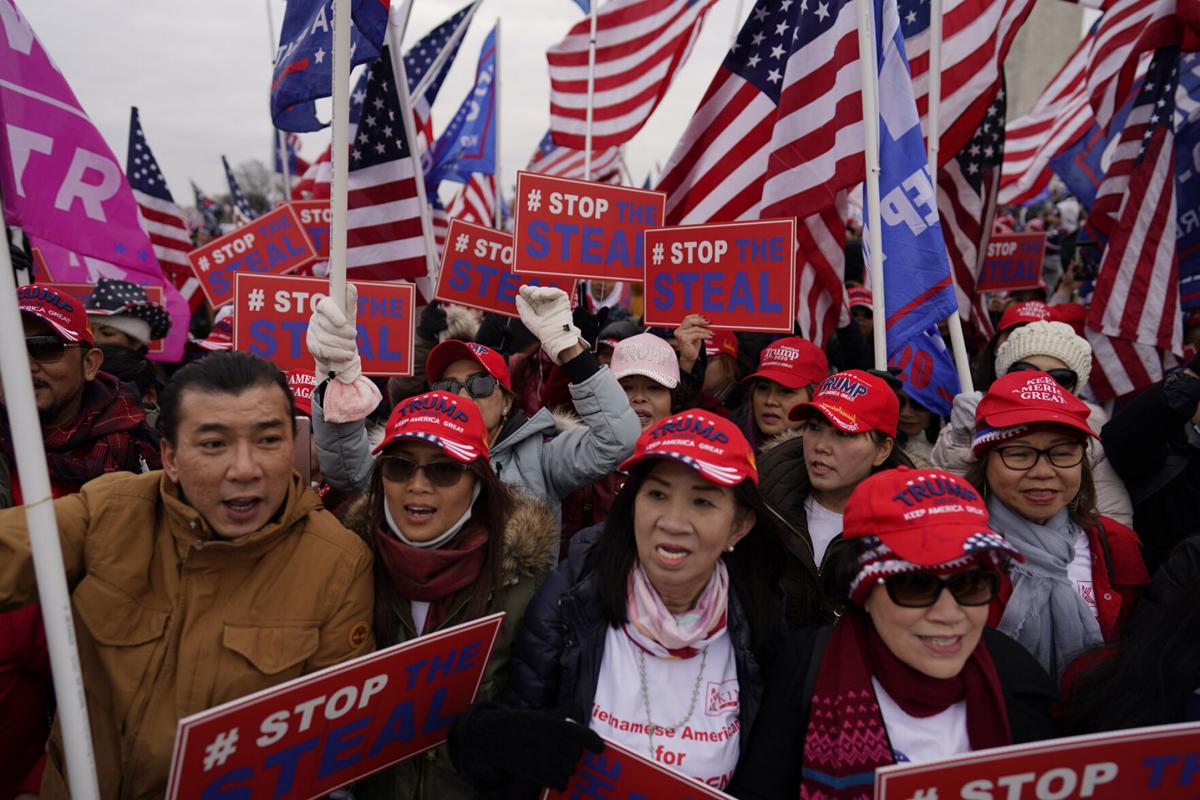 Kent Nishimura/Los Angeles Times/TNS Protesters gather on the second day of pro-Trump events fueled by President Donald Trump’s continued claims of election fraud in an attempt to overturn the results before Congress finalizes them in a joint session of the 117th Congress on Wednesday, Jan. 6, 2021 in Washington, D.C.

Courtesy of Tribune News Service Members of Congress run for cover as protesters try to enter the House Chamber during a joint session of Congress on Jan. 6, 2021 in Washington, D.C.

Protesters gather on the second day of pro-Trump events fueled by President Donald Trump's continued claims of election fraud in an attempt to overturn the results before Congress finalizes them in a joint session of the 117th Congress on Wednesday, Jan. 6, 2021, in Washington, D.C. (Kent Nishimura/Los Angeles Times/TNS)

Kent Nishimura/Los Angeles Times/TNS Protesters gather on the second day of pro-Trump events fueled by President Donald Trump’s continued claims of election fraud in an attempt to overturn the results before Congress finalizes them in a joint session of the 117th Congress on Wednesday, Jan. 6, 2021 in Washington, D.C.

ALBANY —  New York leaders denounced violent protests and an insurrection mob on Washington’s Capitol Hill by President Donald Trump supporters where one woman died after being shot inside the U.S. Capitol and at least one improvised explosive device was found Wednesday in objection to Congress voting to cement President-elect Joe Biden’s win in the 2020 presidential election.

The National Guard and federal police were deployed to combat the violent breach on Capitol buildings and offices, which followed earlier messages of hope from lawmakers to mark the start of the state’s 2021-22 legislative session.

A woman who shot inside the Capitol during the violent protest died Wednesday evening.

The halls of New York’s state Capitol in Albany were quiet while scores of protesters stormed the U.S. Capitol in Washington after some congressional Republicans attempted to object the Electoral College vote certifying Biden’s victory in support of Trump.

Protesters breached security perimeters at the U.S. Capitol, putting the building on lockdown shortly after proceedings began. Lawmakers inside the House chamber were told to wear gas masks and lay on the floor as Capitol police released tear gas, then evacuated from the building.

Biden, who will be inaugurated Jan. 20, addressed the nation from his hometown of Wilmington, Delaware.

“At this hour, our democracy is under unprecedented assault unlike anything we’ve seen in modern times,” he said. “...It borders on sedition.”

The president-elect lambasted Trump for inciting the violence before urging him to denounce his supporters’ threatening and illegal actions.

Trump posted a response video on Twitter shortly after Biden’s remarks encouraging peace from demonstrators after repeating falsehoods he won the November election.

“We have to have peace, so go home,” Trump said in the one-minute video. “We love you. You’re very special.”

Federal lawmakers in both chambers entered lockdown after protestors stormed and threatened the Capitol.

Representatives with U.S. Sen. Chuck Schumer’s office said the Democratic senator is safe, and referred to his statements on Twitter.

At 3:37 p.m., Schumer quoted one of Trump’s tweets asking protesters to remain peaceful, saying “It’s a little late for that. Don’t you think?”

“From @SpeakerPelosi and me: We are calling on President Trump to demand that all protestors leave the U.S. Capitol and Capitol grounds immediately.”

Gillibrand released a statement about the storming of the Capitol early Wednesday evening. The senator and her staff continued to be in lockdown as of 5:30 p.m., but were reported safe.

“The storming of the U.S. Capitol is a stain on American democracy,” she said. “Make no mistake, this disgraceful violence will not stop the inauguration of Joe Biden on Jan. 20.”

The attack of Trump supporters on the U.S. Capitol was a failed coup attempt, Gov. Andrew Cuomo said.

“The cornerstone of our democracy is the peaceful transfer of power,” the governor said in a statement. “We must call this what it actually is: a failed attempt at a coup. This is the final chapter of an incompetent, cruel and divisive administration that has trampled on the Constitution and the rule of law at every turn, and we won’t let President Trump, the members of Congress who enable him or the lawless mob that stormed our nation’s Capitol steal our democracy. The election results are clear and the will of the American people will be carried out.”

State Lt. Gov. Kathy Hochul, a Democrat, said the demonstrators were domestic terrorists in a reaction to their violence Wednesday.

“It’s more than an assault on the Capitol building,” she said in a statement. “It’s an assault on democracy and America itself. Domestic terrorists who undermine our free and fair elections and attempt to sabotage the peaceful transfer of power must be brought to justice.”

“The coup attempt initiated by outgoing President Trump has been despicable,” James said in a statement. “Today, it became violent. If blood is shed, it will be on his hands. These actions, fueled by lies and wild conspiracy theories espoused by President Trump, must be unequivocally condemned by every corner of our society.

“Ultimately, I am confident the rule of law will prevail. Joe Biden, our duly elected president, will assume office Jan. 20, and history will remember this as a sad but unsuccessful attempt to destroy our democratic republic.”

“As a veteran, I’ve proudly fought for America’s right to protest peacefully. There is nothing peaceful about the chaos in Washington today. This is NOT who we are,” Ortt said.

“In the United States of America, we pride ourselves on a peaceful transition of power,” he said. “This is domestic terrorism and it is an attempt to overthrow the elected will of the American people.

“President Trump needs to call on his supporters to end this assault on our democracy. And he must – he absolutely must – concede that Joe Biden is the President-elect of the United States. This needs to end now.”

Assembly Minority Leader Will Barclay condemned the demonstrations in Washington.

“The situation unfolding in Washington D.C. is nothing short of tragic,” he said. “What we’ve witnessed today has no place in our country and should be condemned by anyone who considers themself a true American. Protests have always been part of political discourse, but the events at the Capitol have crossed every line imaginable. As a nation, we are better than this — and we need to show it immediately.”

“Donald Trump began his presidency talking about ‘American carnage,’ and now that is how he is ending his time in office,” she said in a statement. “People are storming the U.S. Capitol because the President has told them he has been wronged, despite there being no evidence to support that claim. Over the past four years, more than any other time, we have seen that elections matters, voting matters and leadership matters. As president, Donald Trump has been a failure and the American people, our image and our values have paid the price.”

The fury comes on the heels of Tuesday’s Senate runoff election in Georgia expected to flip the chamber to Democratic control.

Raphael Warnock became the first Black U.S. senator in Georgia history when he defeated U.S. Sen. Kelly Loeffler, putting Democrats within one seat of capturing a majority of the chamber. Jon Ossoff was declared the victor Wednesday after continuing to hold a steady lead over Republican U.S. Sen. David Perdue.

Around noon Wednesday, Stewart-Cousins opened the 2021 state legislative session in Albany before the unrest began, speaking about hope for the future and change in Congress to officially kick off the next two-year term.

“There is hope and promise on the horizon,” Stewart-Cousins said from the floor, speaking of the hardships of the last 10 months brought on by the coronavirus pandemic. “Vaccines have begun to be distributed, a new president that we can trust to help New York, not hurt us, will soon take office.

“And we get to say good bye to Mitch! Because we won Georgia! And my good Friend, Chuck Schumer will be Majority Leader….and Chuck we need you!

“And today, despite the seditious actions of a few extremists, we are confident Congress will do its job and allow the Government to get back to work.”

“As majority leader, I know he will use New York’s progressive values to right the wrongs of the last four years, and to move our country and our state forward,” Heastie said. “After the events we saw today at the U.S. Capitol, it is more obvious than ever that new leadership is needed. Senate Majority Leader Schumer is committed to protecting our democratic values and is the leader that American families need and deserve to have looking out for them in the Senate.”