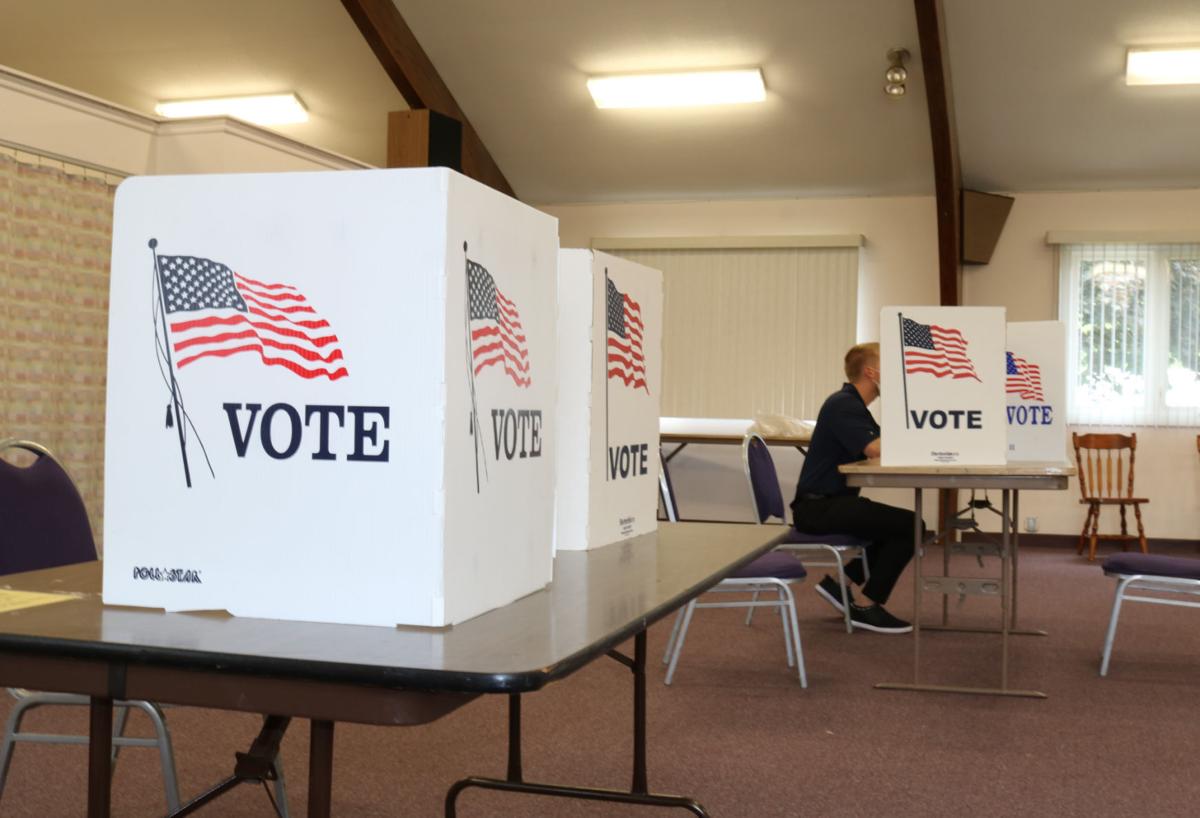 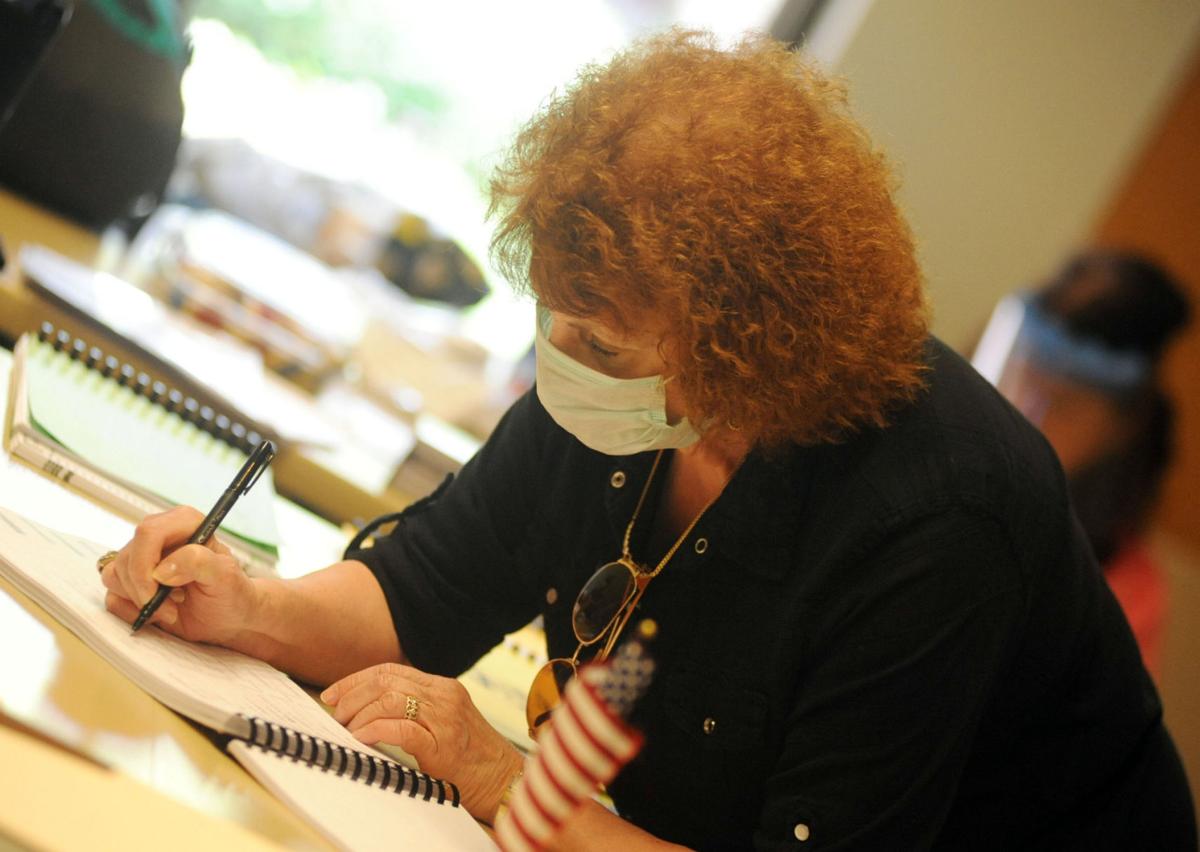 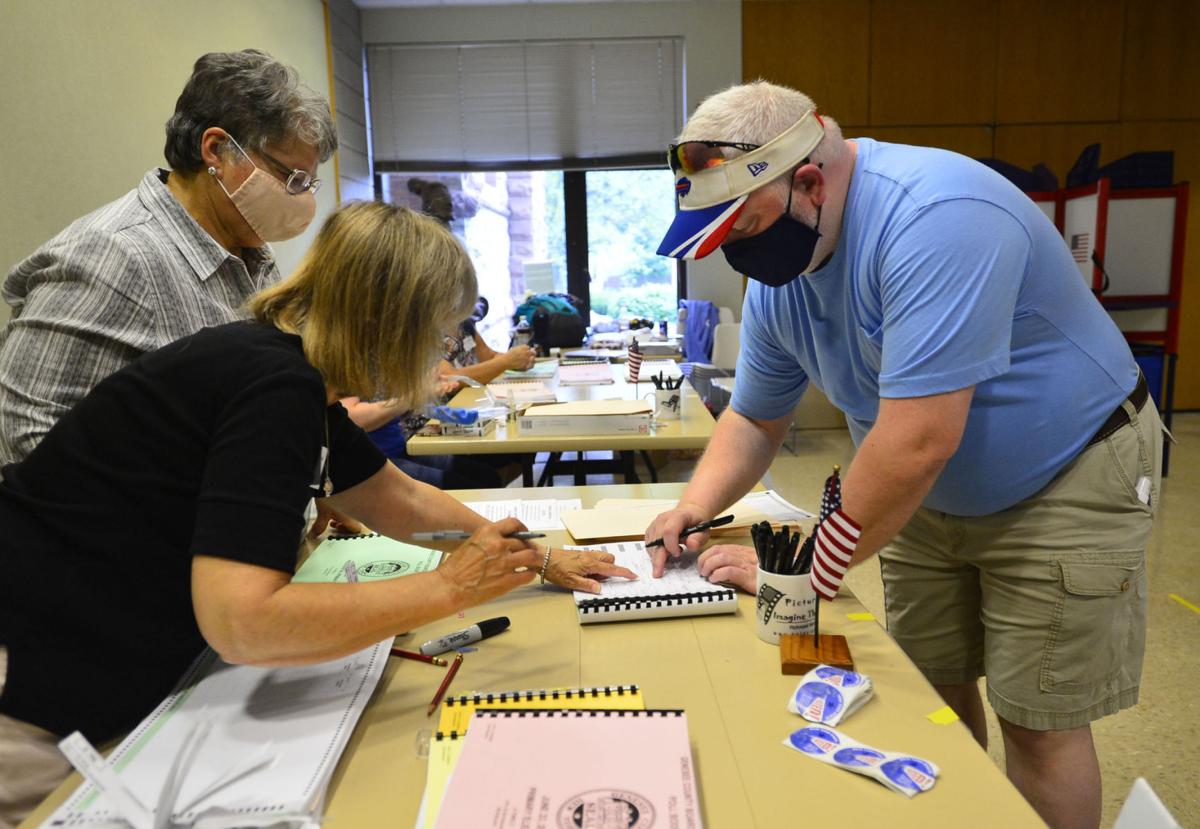 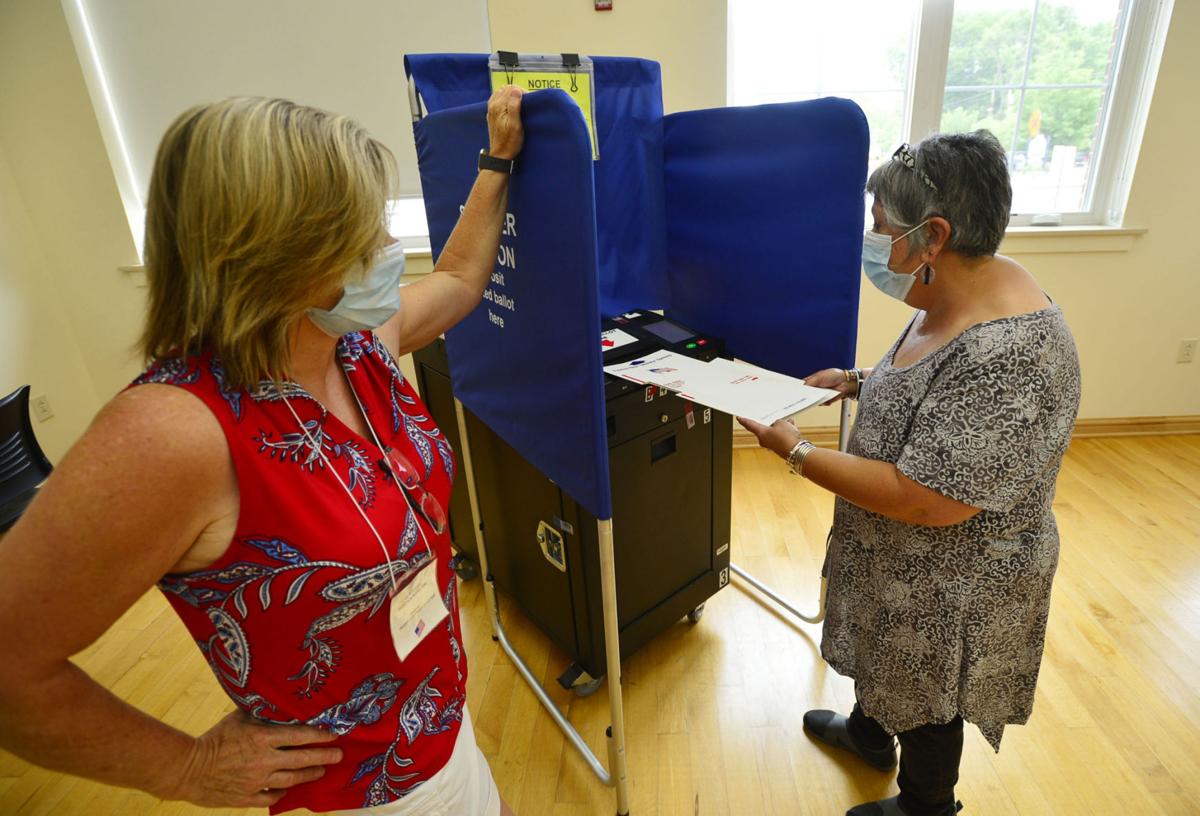 Mark Gutman/Daily News Election inspector at left, Beth Schmidt, watches over as Shirley Nigro places her ballot throuh the voting machine at the Hoag Library in Albion on Tuesday afternoon.

Mark Gutman/Daily News Election inspector at left, Beth Schmidt, watches over as Shirley Nigro places her ballot throuh the voting machine at the Hoag Library in Albion on Tuesday afternoon.

GENESEO – Voters who ventured out to the polls on Tuesday saw a different set up than they were accustomed to.

Measures such as limiting the number of people inside, glass partitions and hand sanitizers were all added in response to the COVID-19 pandemic. The extra precautions were intended to make sure people were able to vote and stay safe amid the pandemic.

“So we are only allowing five voters in at a time and then they go through and we will let other people in,” said Livingston County Democratic Elections Commissioner David M. DiPasquale.

“I thought that it was a very smooth operation and it was very user friendly. As a practice I tend to be pretty cautious any ways, so this is of paramount importance so go on, life is there,” said voter Serena Kniffin.

Voters were out to cast ballots in a special election for the 27th District congressional seat previously held by former Rep. Chris Collins, who left the position last year after pleading guilty to insider trading charges. State Sen. Chris Jacobs, R-Buffalo, and Democrat Nate McMurray, former Grand Island town supervisor, were vying for the seat – which the winner will have the seat until November when he will have to run for election to a full term. Jacobs also faced a Republican Primary.

The Democratic Presidential Primary and delegate voting were among elections that were also on the ballot.

In addition to limiting the number of people allowed into a polling place there was also plenty of hand sanitizer, it is something that took a little bit of getting use to for some voters.

“This was my first time voting in a primary. It was different with hand sanitizer and putting the pen that you use in a different basket,” said voter Theresa Hensler.

Glass partitions were also set up to put space between the polling inspectors and the people who came into vote.

“Our number one priority is the health and safety of our inspectors,” said DiPasquale.

Others say in addition to keeping themselves safe, they wanted to maintain social distancing to protect the loved ones they have at home.

“One active case in Livingston County so I am not worried about it. I am just being careful of it because my wife is undergoing chemo so I can not take any chance of taking anything back to her,” said voter Joseph Ferrero.

Tens of thousands of absentee ballots had been requested.

Siebert reiterated that he and Democratic Election Commissioner Lorie Longhany were encouraging people to vote via absentee ballot out of concern for COVID-19 and the health and safety of poll site workers and voters themselves. He acknowledged that people may not have voted by absentee ballot because they didn’t want to vote or they wanted to vote in-person.

“They want to be sure their vote is counted, so they come in in-person, which, all our polling places are open,” the GOP election commissioner said. “They’re people we know who don’t trust absentee ballots, that they won’t be counted. If they wish to come in, it’s very convenient for them. They know it’s going to be counted.”

“I can tell you if they sent (absentee ballots) to the Board of Elections in Genesee County, it’s going to be counted,” Siebert said.

As for turnout at the polling places early Tuesday afternoon, Siebert said things were pretty slow.

“We anticipated it would be slow because we’ve already got about 8,000 absentee ballots back. I just voted in Stafford at about 12:30 and In the three districts there, there were about 90 people had voted. There were about 100 at the Knights of Columbus in Le Roy. That was about an hour and a half ago,” Siebert said at about 1:15 p.m. Tuesday.

In general, voters’ compliance with wearing masks and social distancing has been excellent, Siebert said.

“All the reports are people are coming in wearing masks, observing the distancing. They’re using the hand sanitizer,” he said.

SIebert did say the Board of Elections can’t ask a voter who comes in without a mask why he or she doesn’t have one.

“If they don’t have a mask on, they’re still not going to be denied a right to vote because they refuse or cannot wear a mask,” he said.

Among the voters who came out of the Genesee County Senior Center in Batavia was Scott Corcoran, who cast his ballots for Chris Jacobs in the NY-27 special election.

Despite the COVID-19 pandemic, Corcoran said he had no concerns about voting at the polling site.

“It was quick to do the voting,” he said, adding it seemed like the process was efficient.

“Myself, I’ve never done an absentee ballot because I like to physically vote in the voting area,” he said. “I feel like it’s a more secure voting method.”

Around noon, more than 200 people had come into the Hoag Library in Albion to vote.

The slow trickle of people moved through the library, which was closed for the special election. Arrows pointed the direction of traffic, and a greeter at the door gave each person a squirt of hand sanitizer before pointing them to where they needed to go.

Voters quietly filled out their ballots and left immediately after, not lingering for more than five minutes. No more than a handful of people were inside voting at any given time.

“Everyone has been really nice and respectful,” said Beth Schmidt, a Republican election commissioner. “Everyone is already coming in with a mask and people are socially distancing. We haven’t really been backed up.”

Turnout was greater than expected in Wyoming County, with officials running out of GOP primary ballots in Java and Bennington. A deputy and Board of Elections staffer were sent out with more.

So voting was definitely a priority — a lady hurried inside the BOE office in Warsaw about 8:50 p.m., asking where she could vote.

Officials at the Wyoming County’s BOE said absentee ballots would decide the election.

At the United Methodist Church on 4520 State Route 63 in Geneseo people came out to vote for a special election for the 27 District Congressional Seat and the Presidential primary.