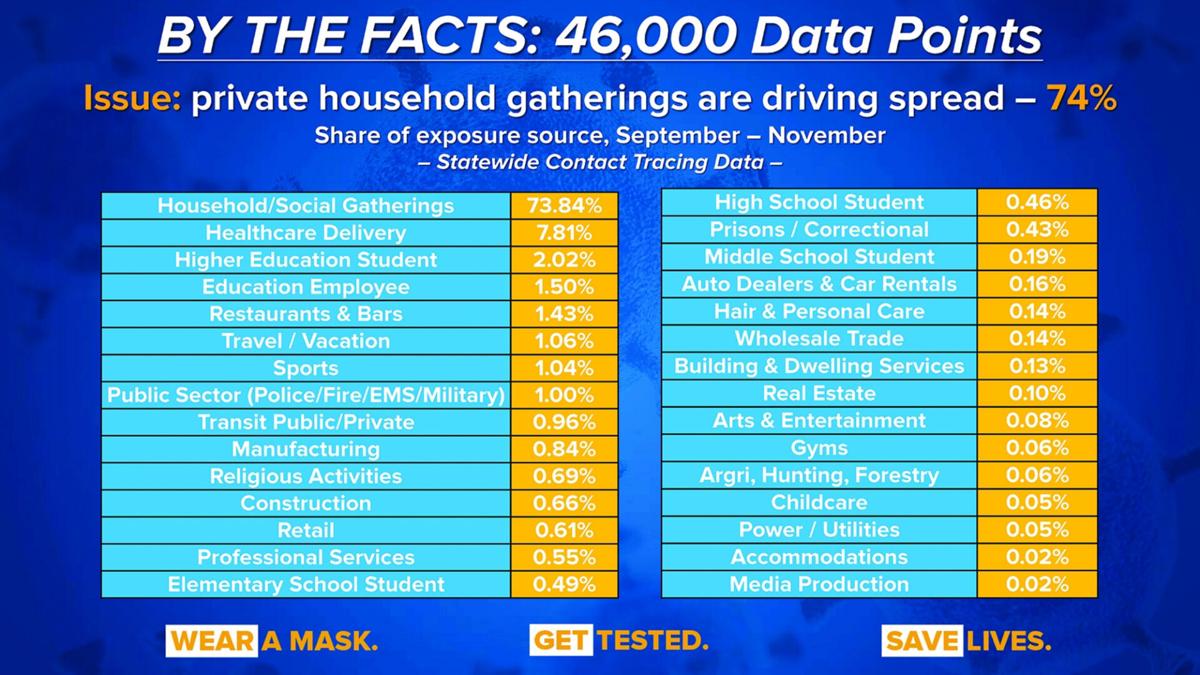 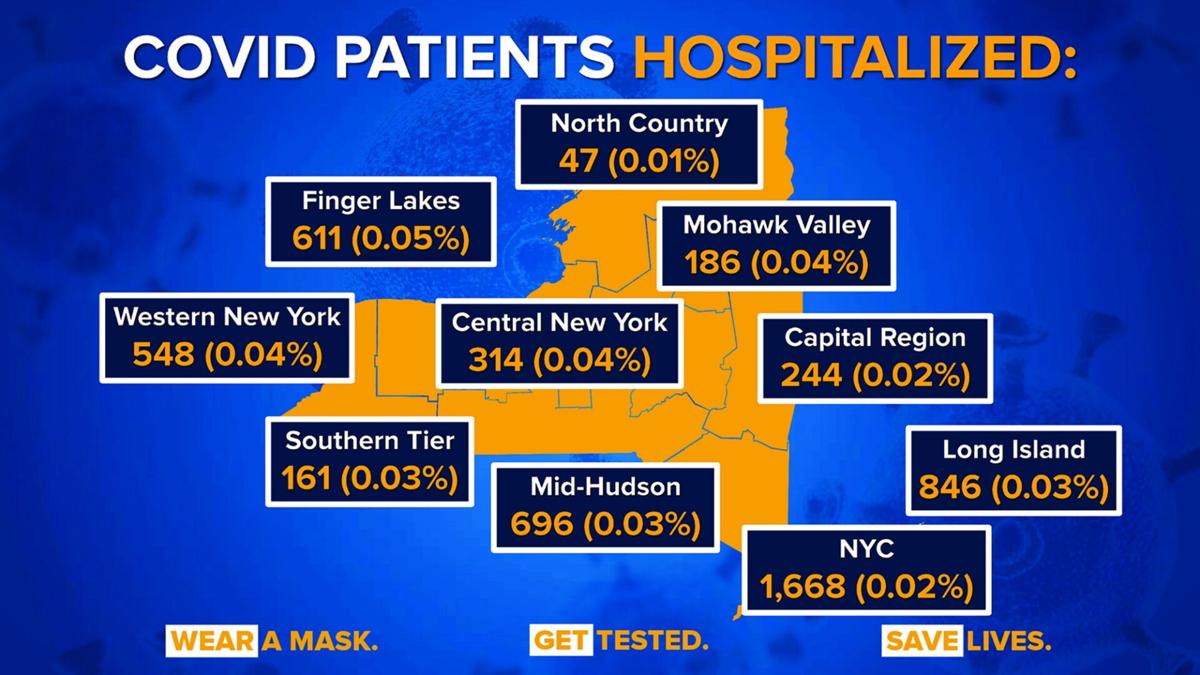 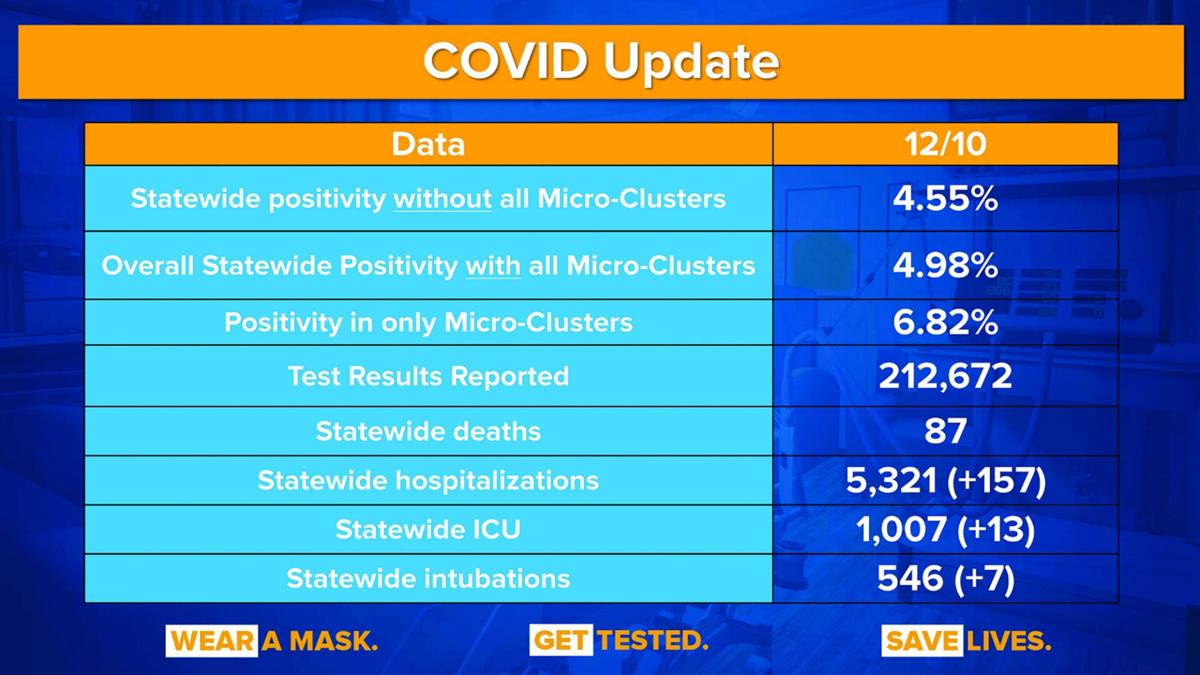 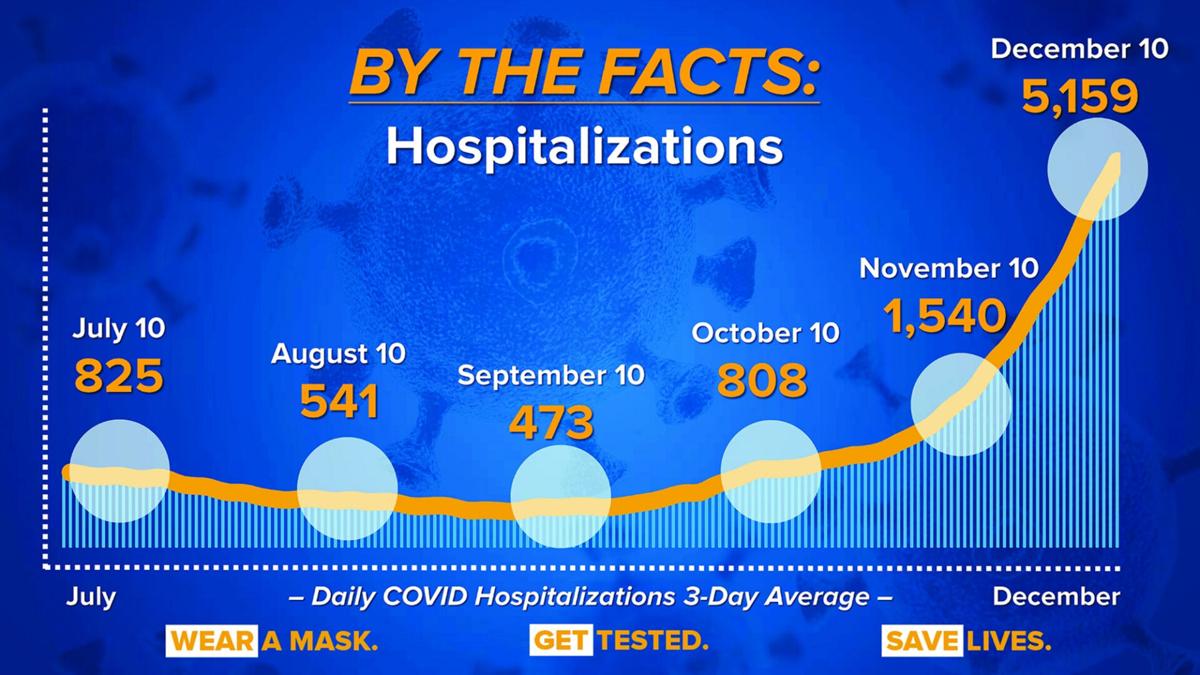 ALBANY — New data released by the state Friday revealed the most prevalent source of COVID-19 spread is small, private gatherings, causing more than 70% of virus infections.

The data released by the state Coronavirus Task Force reveals which activities and industries are more likely to spread the virus in a community. The rates are based on 46,000 data points collected from contact tracer interviews determining the source of exposure from September through November, or the fall surge.

“You want to know what’s generating the new cases so you know where you can stop them,” Gov. Andrew Cuomo explained during a virtual coronavirus briefing Friday afternoon in the state Capitol.

Small, private household gatherings, or what the governor has termed “living room spread,” continue to be the largest catalyst of spread at 74% of new infections.

Health care delivery was the second most likely chance of infection at 7.8%, followed by spread among college students at 2.02%. About 1.5% of new infections hail from educators and education employees.

Hair and personal care businesses caused 0.14% of the infections, with gyms at a miniscule 0.06%. Gyms have caused five known COVID-19 clusters in the state.

“You’re now in very, very small numbers,” Cuomo said of industries further down the contact tracing statistics list. “Hair and personal care was much worse earlier on. So stop the spread where it exists, and stop it where it’s being generated, but don’t waste time on areas that are not generators.”

The state’s transmission rate is 1.3, which signifies an outbreak, as one person infected with COVID-19 is infecting 1.3 other people.

Nonessential businesses are mandated to close in red zones once a community is three weeks away from reaching 90% hospital capacity.

An area is eligible to enter a yellow precautionary zone with a 3% positivity rate over the past 10 days and has a cluster in the top 10% for hospital admissions per capita over the past week.

Orange zones indicate a community has a 4% infection rate over the past 10 days and 85% hospital capacity, or the state Department of Health determined an area has a dangerously high level of hospitalizations.

The state is requiring all 215 hospitals to remain under 85% capacity by using its mandated 25% overflow bed space or reducing elective surgeries and procedures, or both.

“Over 85 percent, that hospital is now in a critical situation,” Cuomo said. “Ninety percent triggers a red zone.”

Hospitals continue to be mandated to have a 90-day supply of personal protective equipment.

In-person elementary and middle school classes remain one of the lowest drivers of new COVID-19 infections, Cuomo said. The governor encouraged all kindergarten through eighth-grade classrooms to remain open unless a school reports a high positivity rate.

“Schools are almost, without exception, safer than local communities in terms of infection rate,” the governor said. “This was not what was initially expected. If it’s safer for the children to be in school, then have the children in school. It’s less disruptive.”

The governor discouraged against a full state shutdown of nonessential businesses like in the spring.

“We want as much economic activity as possible and respect public health and the cost of the virus,” Cuomo said. “Yes, economic activity. Yes, as much as we can, social activity balanced with public health. Some states have had these dramatic full open, full closedowns. I think that’s highly disruptive and it’s not the best way to go through this.

“This is a constant calibration,” he added.