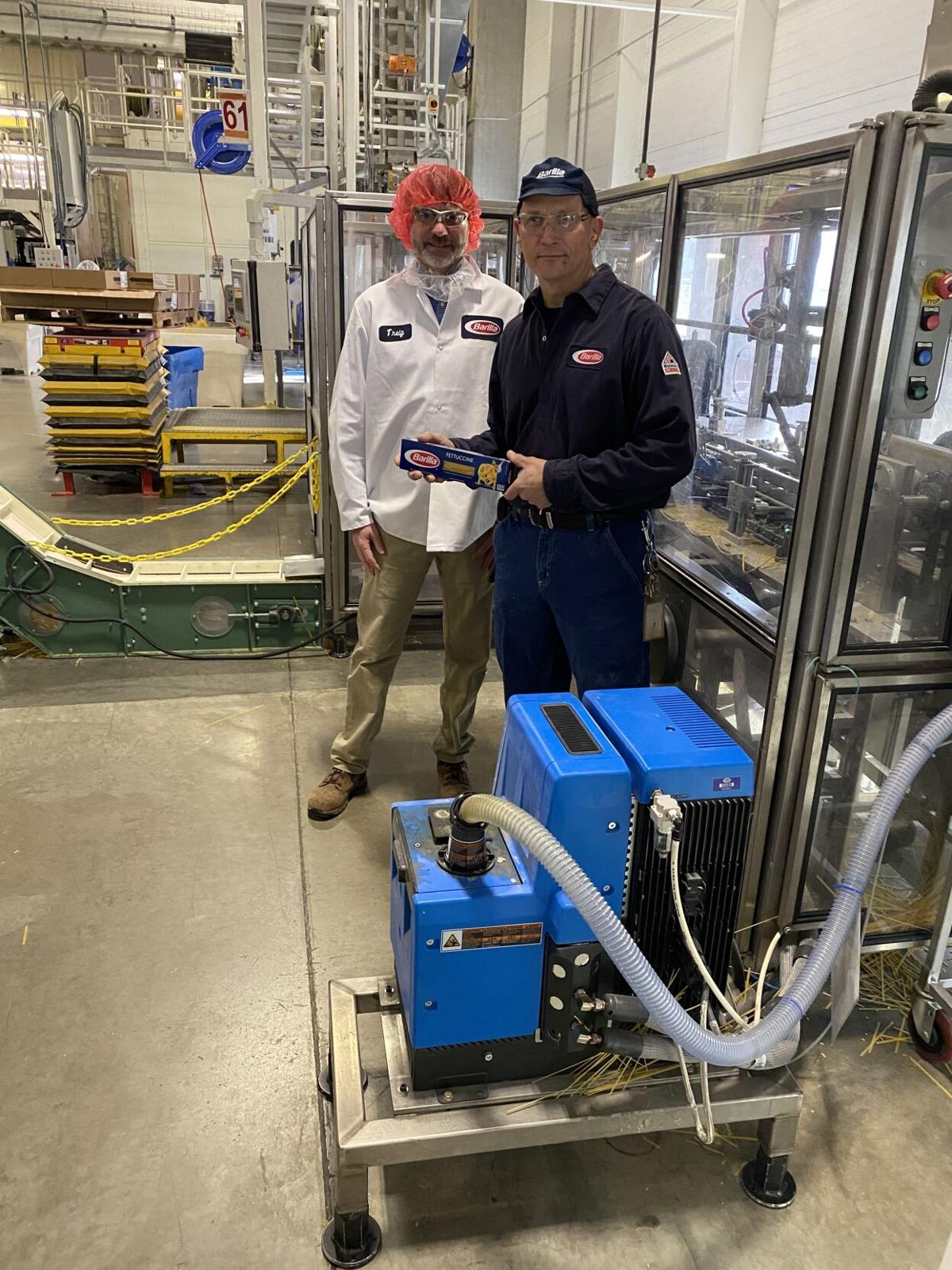 Barilla National Grid Energy Efficiency Specialist Jay Snyder and Barilla Plant Manager Bill Boula appear with a new melt unit that is used to heat-glue and fasten the end of cardboard pasta packages that end up on retail shelves. 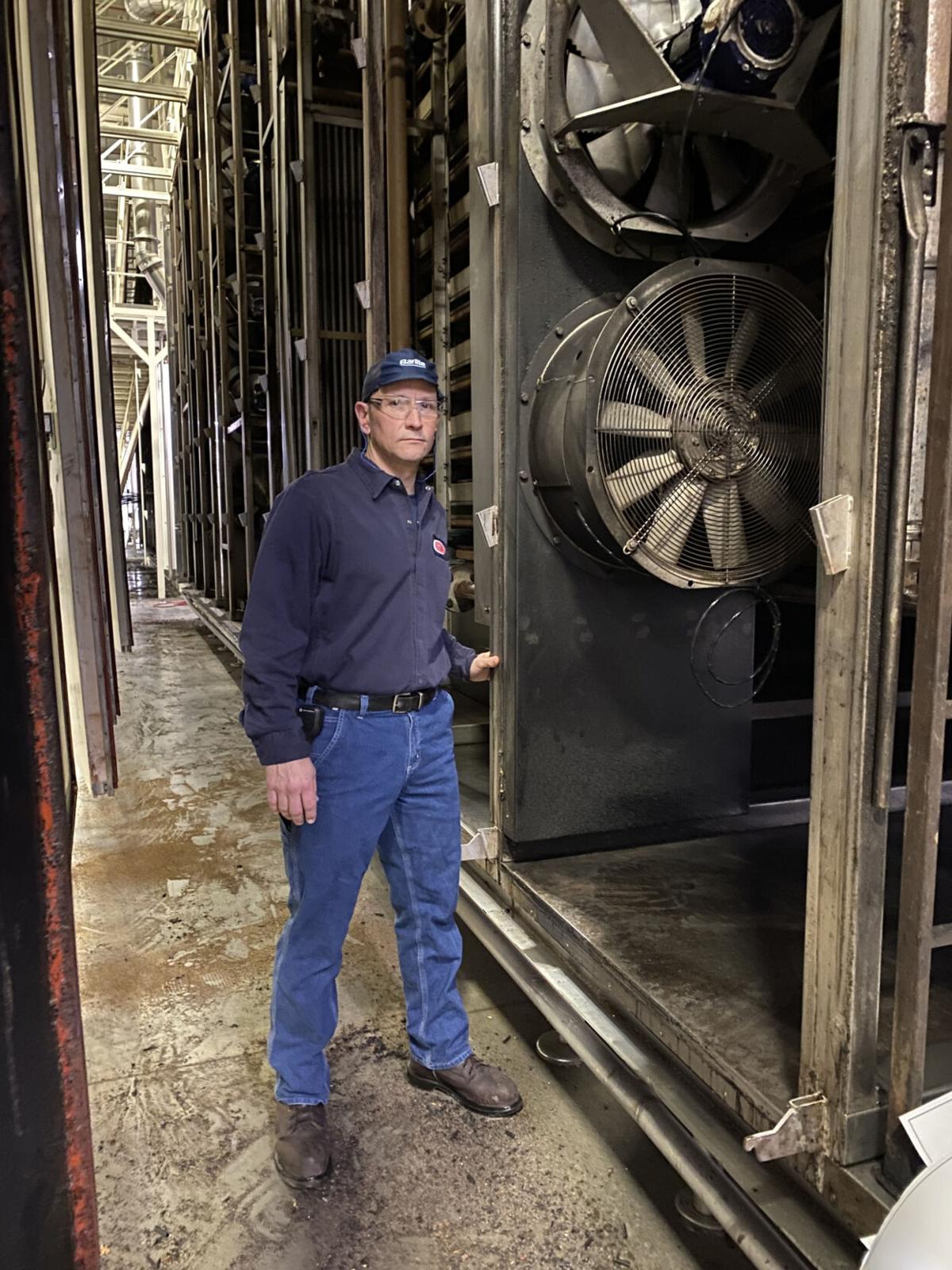 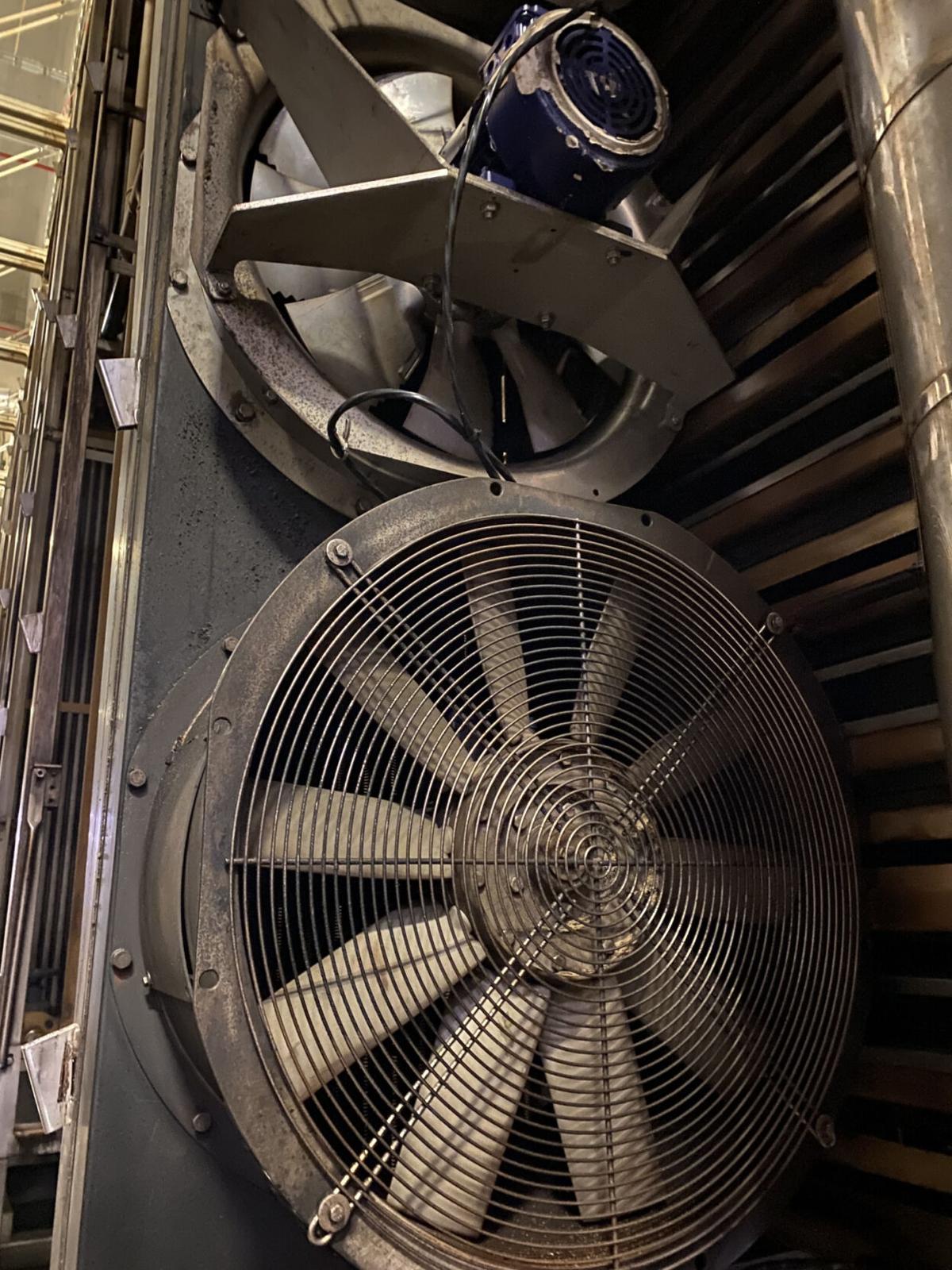 At top are new energy efficient fans being installed at Barilla plants worldwide, including Avon. The older version of the fan being replaced is seen at bottom. 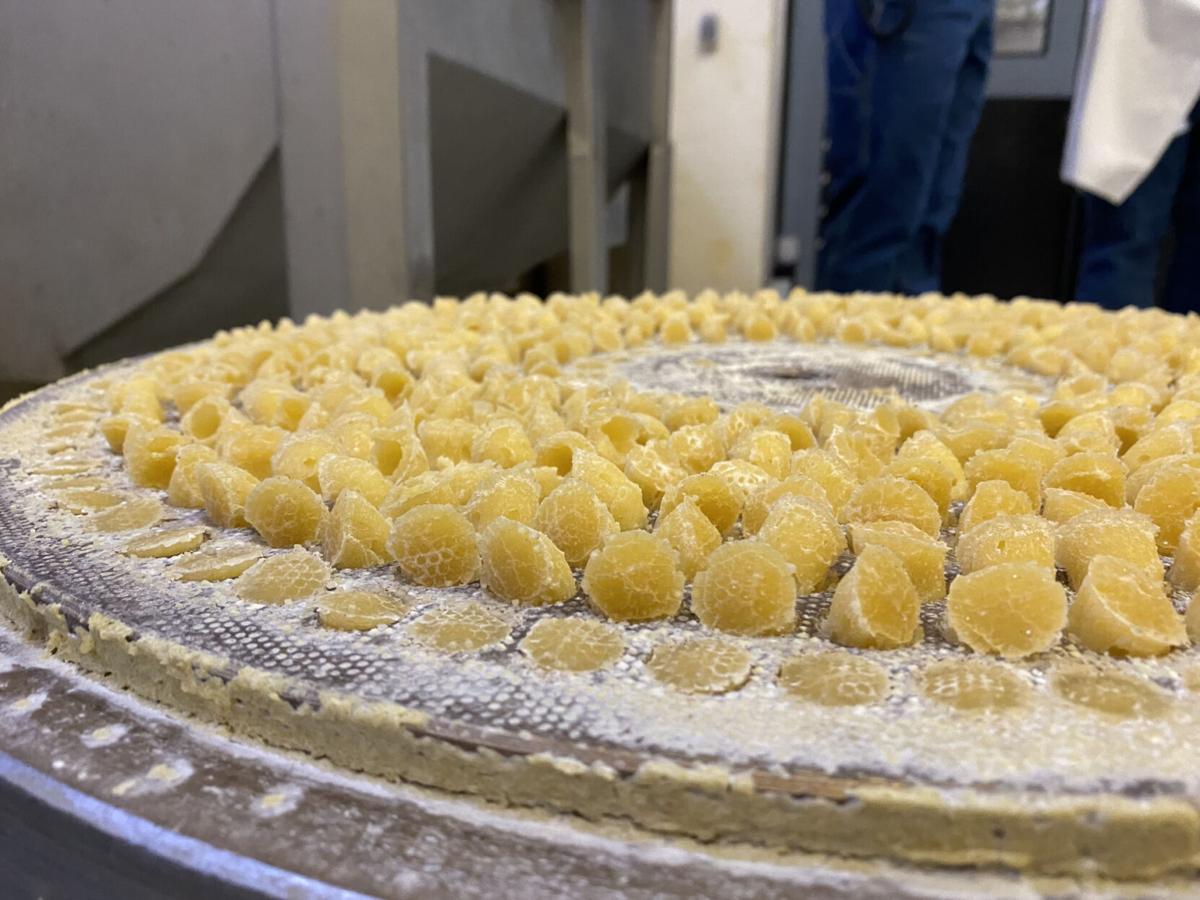 Provided Photograph Barilla Pasta that has been extruded through one of the die machines. The dies are what shape the pasta. 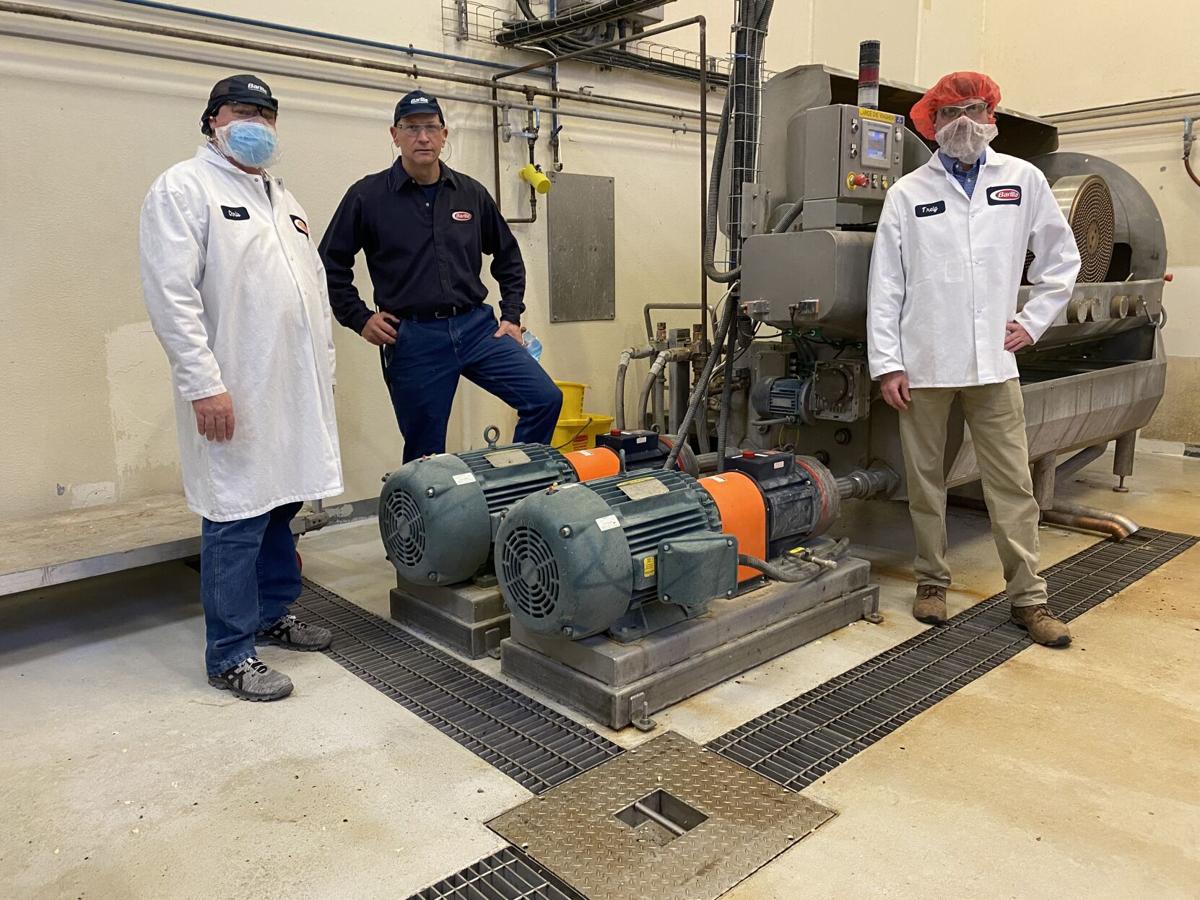 Barilla National Grid Energy Efficiency Specialist Jay Snyder and Barilla Plant Manager Bill Boula appear with a new melt unit that is used to heat-glue and fasten the end of cardboard pasta packages that end up on retail shelves.

At top are new energy efficient fans being installed at Barilla plants worldwide, including Avon. The older version of the fan being replaced is seen at bottom.

Provided Photograph Barilla Pasta that has been extruded through one of the die machines. The dies are what shape the pasta.

The utility company has provided the pasta manufacturer with more than $100,000 in energy efficiency incentives and is continuing to work with the company to identify additional cost- and energy-savings opportunities to help the plant run more efficiently and remain competitive, company and utility officials said.

At Barilla, recent upgrades include those to the packaging line, where a new melt system was installed to heat-glue and fasten the ends of cardboard pasta packages that eventually find their way to retail store shelves. Barilla officials estimate that the new melt system – which now uses less adhesive because glue is applied in a series of small beads instead of longer, straight lines – is also easier for plant staff to operate and expedites the glue-heating process when compared to its less-efficient predecessor.

The new melt system was aided by a $52,000 National Grid energy efficiency incentive and will result in an annual energy cost savings of around $20,000, according to National Grid officials.

Additionally, through a separate retro-commissioning process that Barilla conducted at its 100 Horseshoe Blvd. facility, the company will save an estimated $33,000 annually on glue costs. Annual energy consumption also will be reduced by about 12,000 kWh, which is slightly more than the amount used by the average American residential utility customer in 2020, according to U.S. Energy Information Administration.

Plant manager William Boula said that the work being done at the Avon facility reflects the growth of the company, which also is looking to add staff.

“ ‘Good for you, good for the planet,’ is our mission statement,” Boula said. “And to develop our business responsibly across our various markets, we’re constantly thinking about ways to promote sustainable development for our company, which includes reducing waste and strengthening relationships with those across our supply chain. Partnerships and incentives like those provided by National Grid always help us, and we’ll work together to further increase efficiencies while reducing costs and our carbon footprint.”

National Grid has a history of working with customers that invest in their facilities to bolster sustainability initiatives and support growth plans, the utility company said.

“When National Grid works with companies like Barilla to develop innovative solutions, we move closer to a green energy future because we reduce both energy use and carbon footprint,” National Grid Regional Director Ken Kujawa said in a news release. “The melt system is one of Barilla’s many projects that we’ve worked on together, and we look forward to future collaborations.”

National Grid and Barilla are working to identify opportunities for additional cost and energy savings. Among the projects include improvements to the pasta drying line where more than 500 new energy-efficient fans are to be installed that will reduce noise and energy use.

Boula said that the new fans are part of a broader corporate initiative, and are being installed at Barilla plants worldwide. And while airflow and the drying process will remain the same at the Avon facility, “changing to fans with different housings and blades that rotate quietly will make for a better working environment,” he said. “We estimate that the first 79 fans installed will save around 500,000 kWh annually.”

National Grid and Barilla also are reviewing a potential project for the pasta manufacturers’ bag line, where products for the consumer products and food service industries are packaged.

Funding for the Barilla projects was provided through National Grid’s Energy Efficiency Program, which includes financial incentives for commercial and industrial customers who reduce electricity costs. Incentives are available for customers who install energy-efficient lighting, controls, HVAC equipment, motors/electronic speed controls and other systems that reduce energy use and/or enhance productivity. In 2021, National Grid has provided $46 million in incentives through its Energy Efficiency programs to support electricity and natural gas projects across the company’s New York State service territory.

Other companies that in recent years have benefitted from National Grid’s energy efficiency program have included:

n Linde PLC, which used National Grid incentives to cover up to 19 percent of LED lighting project costs at its Tonawanda facility.

n Cummins’ Jamestown Engine Plant, where an LED lighting program resulted in an annual savings of $425,000 and avoidance of 2,200 tons of carbon dioxide equivalent per year.