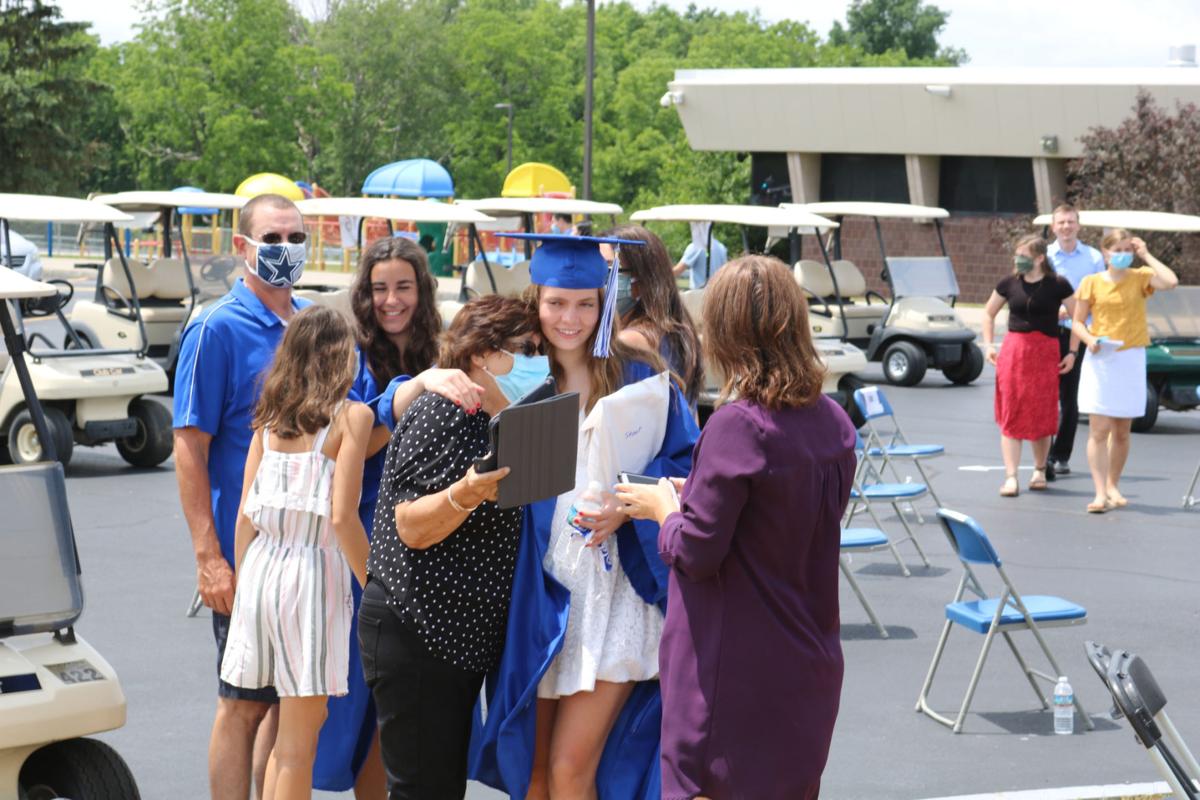 Matt Leader/Livingston County NewsNewest alumna. A member of Geneseo’s class of 2020 gets a hug shortly after receiving her diploma. Saturday morning’s graduation ceremony was held outdoors to adhere to social distancing recommendations. 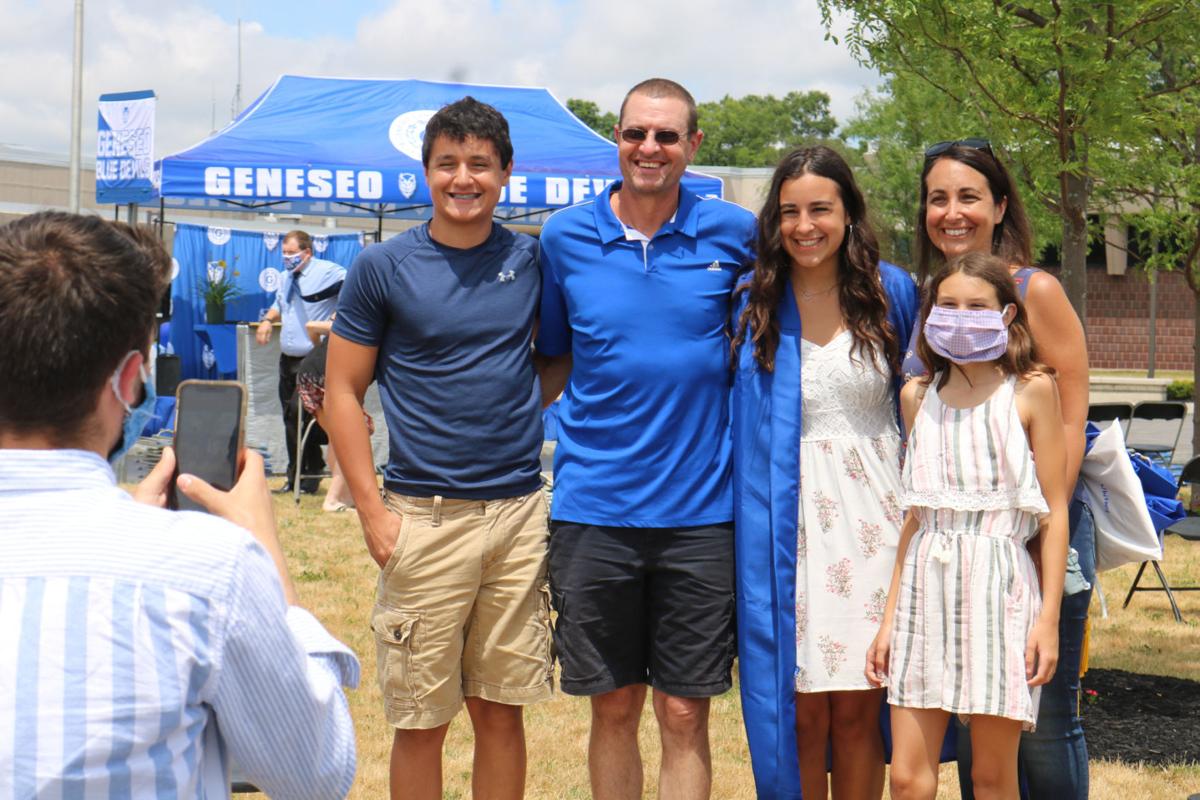 Matt Leader/Livingston County News A Geneseo Central School graduate poses with her family for a photograph following commencement on June 27. 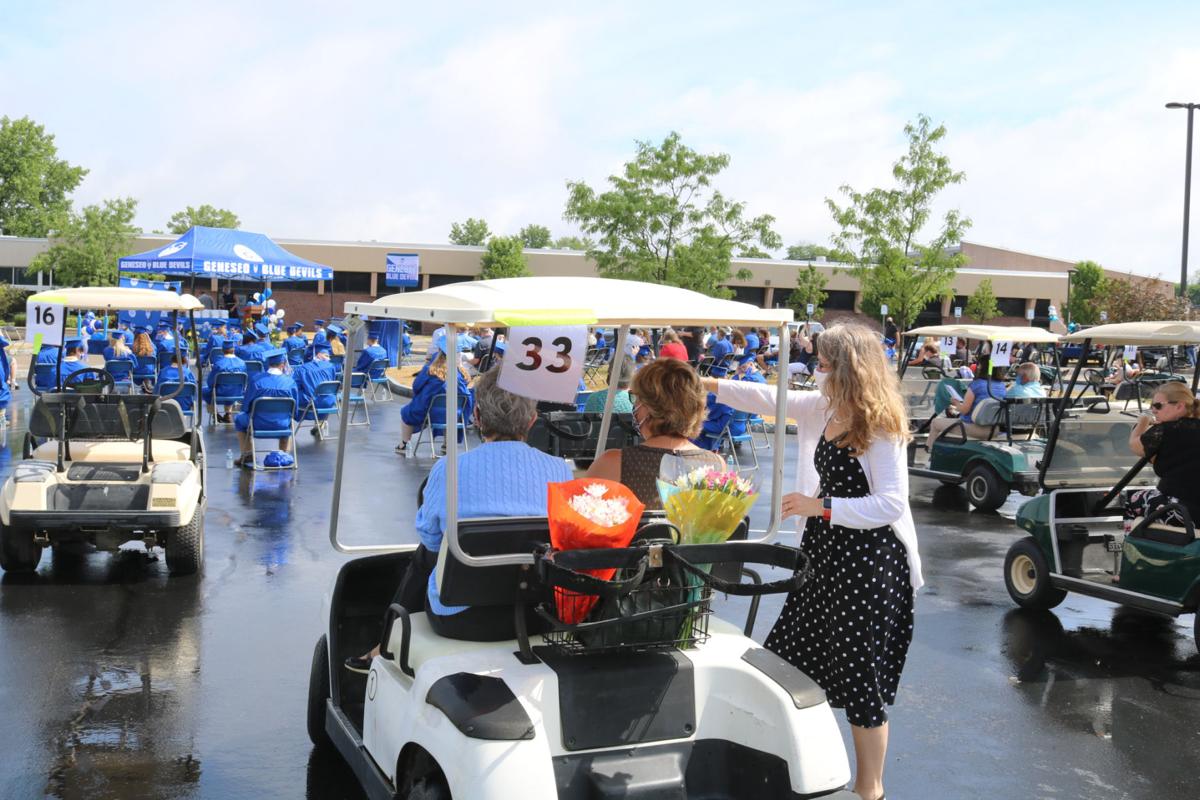 Matt Leader/Livingston County NewsNewest alumna. A member of Geneseo’s class of 2020 gets a hug shortly after receiving her diploma. Saturday morning’s graduation ceremony was held outdoors to adhere to social distancing recommendations.

Matt Leader/Livingston County News A Geneseo Central School graduate poses with her family for a photograph following commencement on June 27.

GENESEO – It’s been a weird year for everyone, not least of all those high school students who were deprived of a senior year. No sports seasons. No prom. No senior skip day. With the ongoing ramifications of the coronavirus pandemic, those events, and the broader sense of normalcy they contribute to, have largely been absent these past few months.

So when the 65 members of Geneseo Central School’s class of 2020 assembled in the high school parking lot Saturday morning, joined by family members and friends, the graduation ceremony that followed yielded more than diplomas. It offered a chance for students to come together, occupy the same space and share a collective experience that is an important right of passage.

The district turned its drop off area and part of its parking lot into a loose semi-circle, with cars, rented golf carts and chairs arranged around a central, raised stage which students crossed – one by one – to accept their diplomas.

About half way through the June 27 ceremony, things stopped. Parents and other family members occupying the chairs and golf carts who’d just watched their seniors accept their diplomas left their seats, which were then sprayed down with disinfectant by district teachers and janitorial staff. After, parents previously waiting farther away in parked cars seated themselves in the chairs and golf carts so they could be closer to the stage when their seniors accepted their diploma during the ceremony’s second half.

Spectators seated in parked cars were far from stingy with their horns, with blaring cacophonies erupting after each graduate walked the stage to accept their diploma.

After Saturday’s ceremony had wrapped up and most families had left the school’s grounds to participate in a car parade through the village, seniors Bella Loughlin and Parker Cole hung back in the parking lot to take some pictures. The two graduates, who attended their first day of kindergarten together at Geneseo, had mixed feeling about graduating.

“It’s kind of sad because we’re not coming back,” said Loughlin, who plans to study finance at Saint John Fisher College in Rochester in the fall. “But it’s time to move on into the next chapter of our lives. I’m kind of excited for moving on.”

Cole said this is “not at all” what he expected of his senior year.

“It was pretty hard to adjust from being at school every day, seeing my friends every single day and just finishing my last year with everyone face to face,” he said. “I went from doing school work and hockey 24/7 to all of a sudden, no longer either because school closed down and so did hockey.”

In recent weeks, Cole’s time has been spent working – sometimes as much as 80 hours per week - and trying to figure out ways to see his friends while adhering to social distancing recommendations.

To reach graduation day, not just after months of isolation, but after approaching it over the course of years of school, is bittersweet, said Cole.

“I’m a little upset by the fact I don’t get to see my friends every single day in the hallways, I don’t get to have a good laugh or crack a joke or do something we shouldn’t be doing,” he said.

Asked if he was sad to be graduating, Cole answer: “A little bit.”

At the same time, it feels like a culmination, Cole said. One he and his classmates have been pursuing for the past 13 years.

“I’m amazed that we finally made it here,” he said. “It’s been forever and I’m super happy we actually got here.”

“Yeah,” added Loughlin with a chuckle. “I agree.”

As Cole and Loughlin move on to the next chapters of their lives, both graduates said they’ll carry with them the sense of close-knit community that was a feature of their time at Geneseo. It’s a place, they said, where there are no unfamiliar faces, where everyone knows everything about everyone else, where people lift you up instead of tearing you down.

Added Cole: “It was an awesome community to grow up in. I loved growing up with everyone and I’m going to miss everyone.”