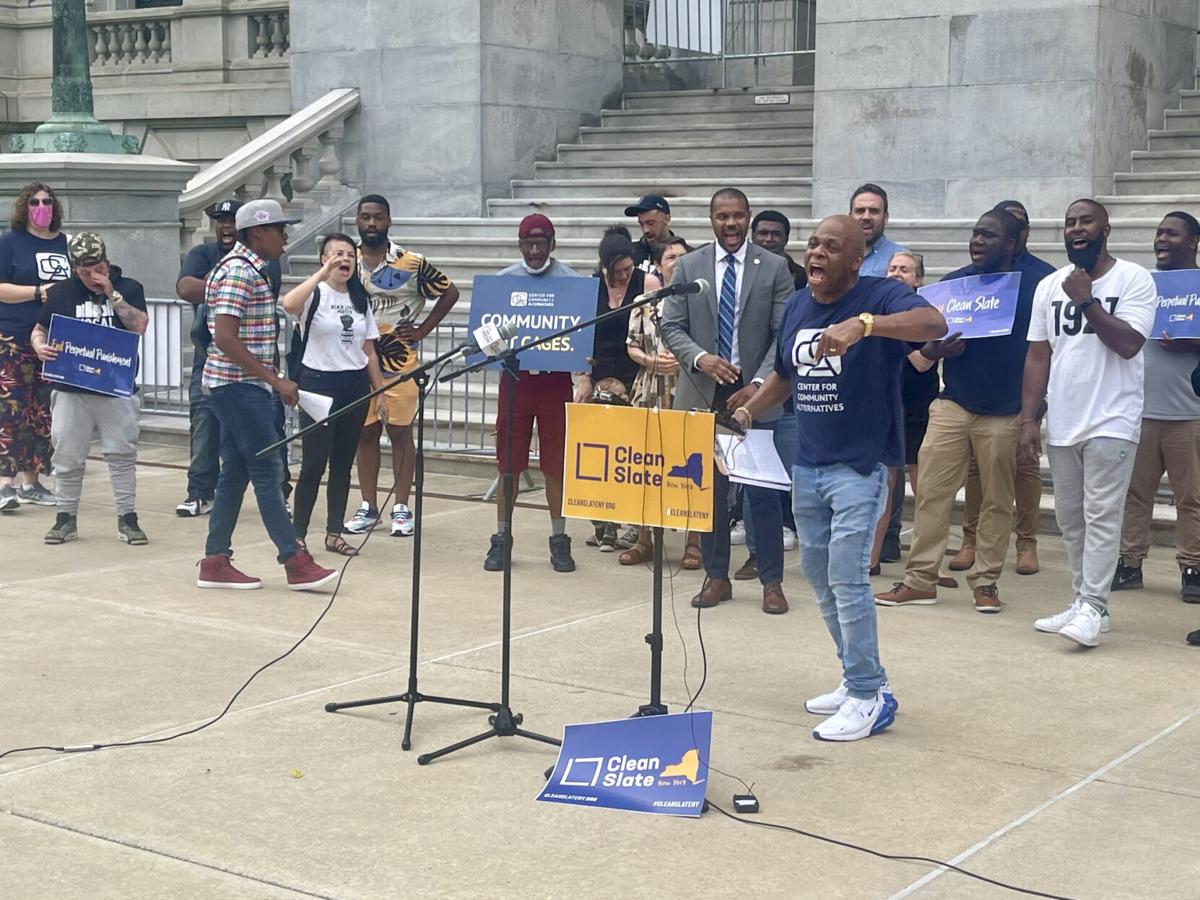 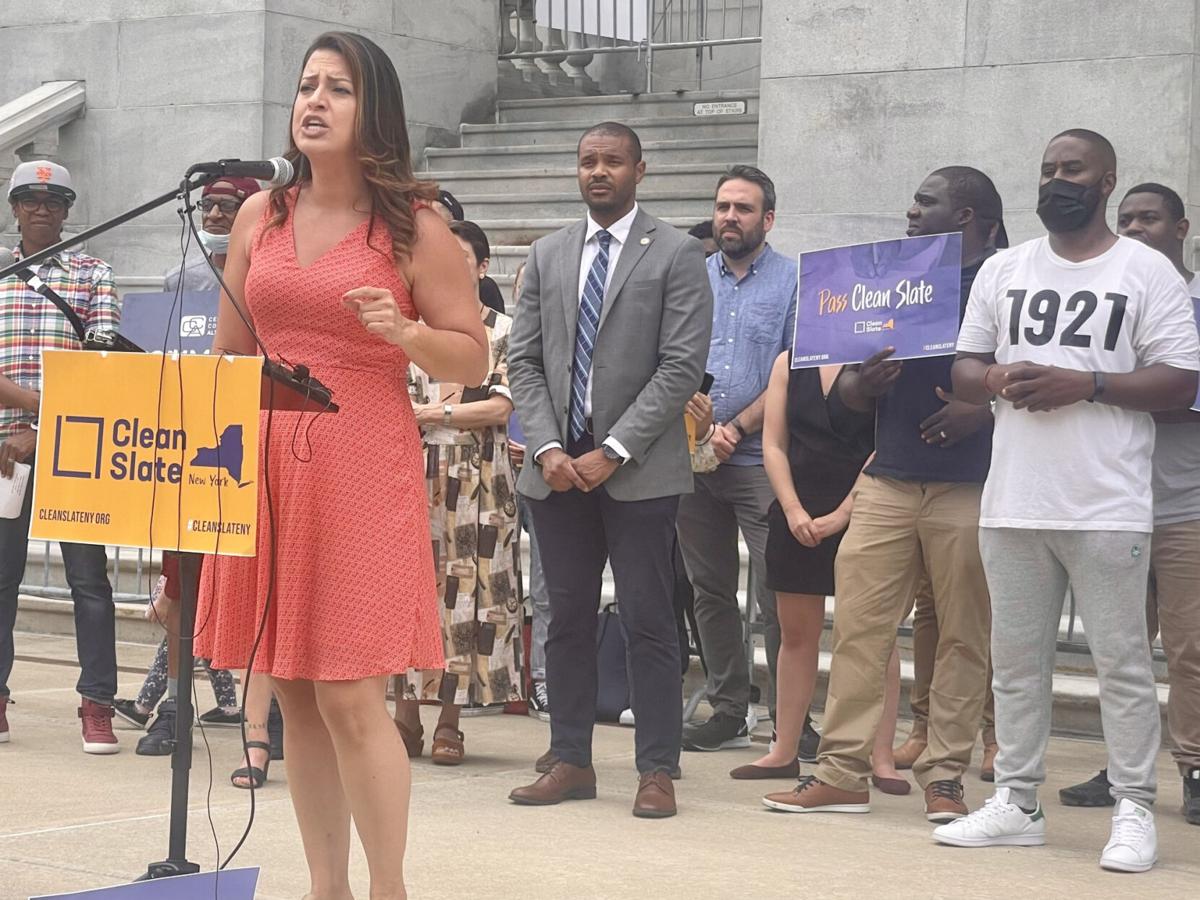 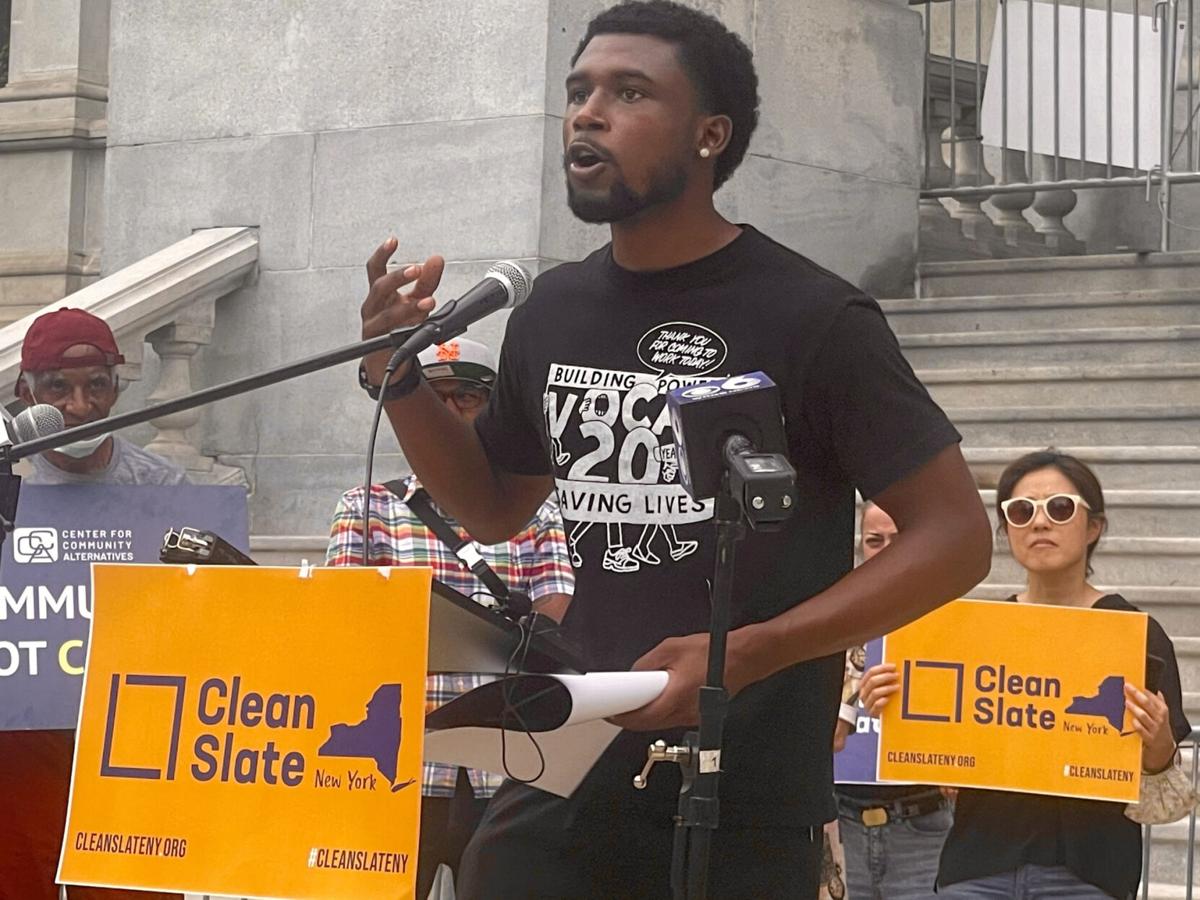 Lukee Forbes, of Albany, spoke in front of the state Capitol on Tuesday about how passing Clean Slate would change his life. Forbes, at 26, said he continues to struggle with his criminal record from age 15 affecting his opportunities. Kate Lisa/Johnson Newspaper Corp.

Lukee Forbes, of Albany, spoke in front of the state Capitol on Tuesday about how passing Clean Slate would change his life. Forbes, at 26, said he continues to struggle with his criminal record from age 15 affecting his opportunities. Kate Lisa/Johnson Newspaper Corp.

ALBANY — The Clean Slate bill is set to pass the state Legislature before session ends this week after lawmakers negotiated a deal overnight to change the measure to seal, and no longer expunge, New Yorkers’ criminal records after completing a prison sentence.

Initially, Clean Slate was set to automatically seal and expunge New Yorkers’ criminal record after one year for misdemeanors and three years for certain felonies after release from prison.

The bill was reintroduced overnight to allow for the automatic sealing of misdemeanors after three years and felonies after seven years, but not expungement of records.

“We got a deal, now, it just has to move through conference again,” Clean Slate sponsor Assemblywoman Catalina Cruz, D-Queens, said Tuesday.

Cruz is confident the bill will pass, she said, adding, “As confident as any legislator should be two days before you have to get the bill done.”

Assemblyman Harvey Epstein, D-Manhattan, said the changes are reasonable to get the bill passed.

“I think we’ve been negotiating on a time frame for felonies and misdemeanors,” said Epstein, who co-sponsors the measure. “Everything is in negotiation, but I think we’re in a good place. Those are changes that make a lot of sense because you have to be able to meet your partners when you’re negotiating.”

New Yorkers with sealed criminal records do not have to mark on a job or housing application that they have been convicted of a crime, Epstein said.

Officials in the criminal justice system, such as judges, district attorneys and police, will continue to have access to sealed criminal documents.

“It is basically a clean slate,” the assemblyman continued. “It’s not an expungement, but it gets you about 80 percent of the way there.”

Melissa Agnew, community leader with Center for Community Alternatives and member of the Clean Slate NY campaign, said the measure will powerfully change the lives of countless New Yorkers to obtain employment and housing, regardless of legislation changes.

“This two-way agreement is a testament to the powerful advocacy by impacted people and organizers across the state,” Agnew said in a statement Tuesday. “While our work will continue after this legislative session, I know personally the difference that the automatic, inclusive sealing of records will make to New Yorkers across the state. We are incredibly proud of our communities and supporters for generating the momentum necessary to bring the Clean Slate Act to this point. Now it’s time to get the bill across the finish line.”

Epstein is focusing on passing the current Clean Slate measure before pushing for another bill to expunge residents’ criminal records.

Clean Slate is estimated to seal the criminal records of 2.3 million New Yorkers.

Dozens of advocates have demonstrated in front of the state Capitol in the last two weeks to push lawmakers to pass the bill before Thursday’s scheduled end of legislative session.

Activists and progressive Democratic lawmakers rallied in West Capitol Park on Tuesday to make one final push for the bill’s passage.

Gregory Pierce, a member of the group Center for Community Alternatives, recounted how, at age 71, his criminal convictions from decades ago continue to prevent him from securing employment.

Pierce spent 21 years in prison and was trained to do electrical work and general maintenance.

“I can’t change that,” Pierce said of his past, “but I want to work and I have a lot to give. ... I don’t have metal handcuffs, I have paper handcuffs. It angers me because I committed a crime, I did my time, now let me do what I learned how to do. I learned how to do all those things because I wanted to come home here and be a different person.

Assembly members Demond Meeks, Anna Kelles, Chris Burdick and Jessica González-Rojas and Sen. Jabari Brisport, some of the Legislature’s leading progressive members, were in attendance and spoke in favor of passing Clean Slate.

Lukee Forbes, of Albany, was convicted of a crime at the age of 15, or as a juvenile offender. Forbes, now 26, said his previous criminal record continues to impact his opportunities.

Clearing his records would require knowledge of the legal system and money he doesn’t have.

“Two-thirds agrees, but that one-third that doesn’t ... those are the ones who block our opportunities,” Forbes continued. “It’s that one-third that is preventing us from removing our paper cuffs. This has been referred to as something to save the world because it can.”

Republicans in the Senate and Assembly have railed against Clean Slate and other proposed criminal justice reforms several times this session, but with heightened frequency and alarm over the last two weeks.

Assembly Minority Leader William Barclay, R-Pulaski, and Senate Minority Leader Robert Ortt, R-North Tonawanda, each have pointed to the exponential increase in violent crime, including burglaries, shootings and homicides, in cities across the state. Incidents of gun violence and violent crime have skyrocketed across the nation over the last year.

Barclay and Ortt say the Clean Slate bill will only exacerbate the public safety threat to New Yorkers affected by the state’s controversial bail reform and other liberal criminal justice policies.

“The rise in crime coincides very closely with the misguided reforms recently enacted by the governor and legislative majorities,” Barclay said in a statement Friday. “Without immediate action from the Legislature, I fear this summer may be one of the most violent in recent history. Put bluntly, we simply cannot endure living in fear. I am calling on lawmakers from every region of New York to come together and devise a solution to this growing problem.”

The amended Clean Slate bill was recommitted to the Codes Committee late Monday night. It remained in committee as of press time Tuesday.