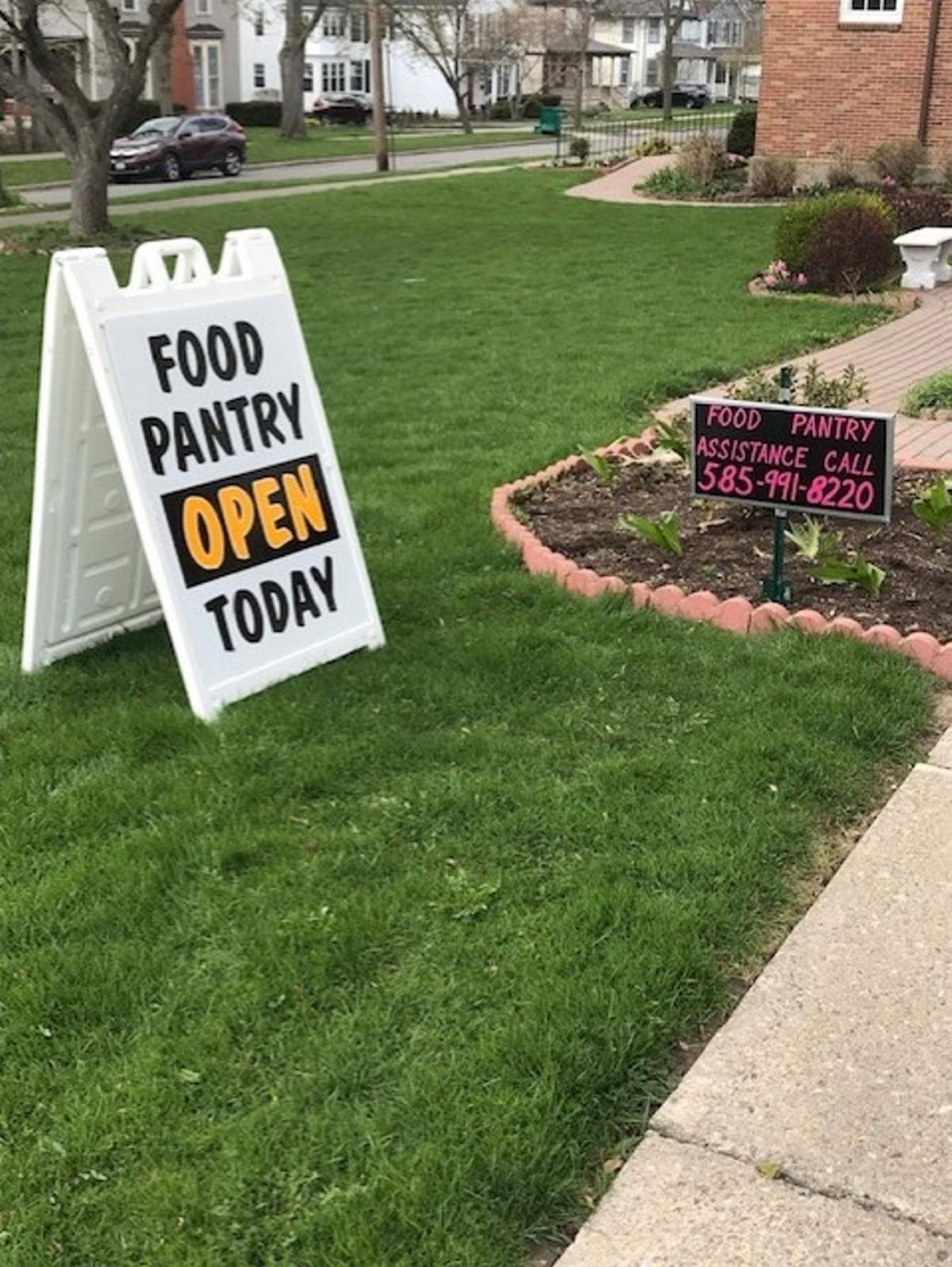 Provided Photograph The doors at the Geneseo/Groveland Emergency Food Pantry is located at 31 Center Street, in the lower level of the Central Presbyterian Church in Geneseo. The pandemic has brought changes to how the pantry distributes its food. 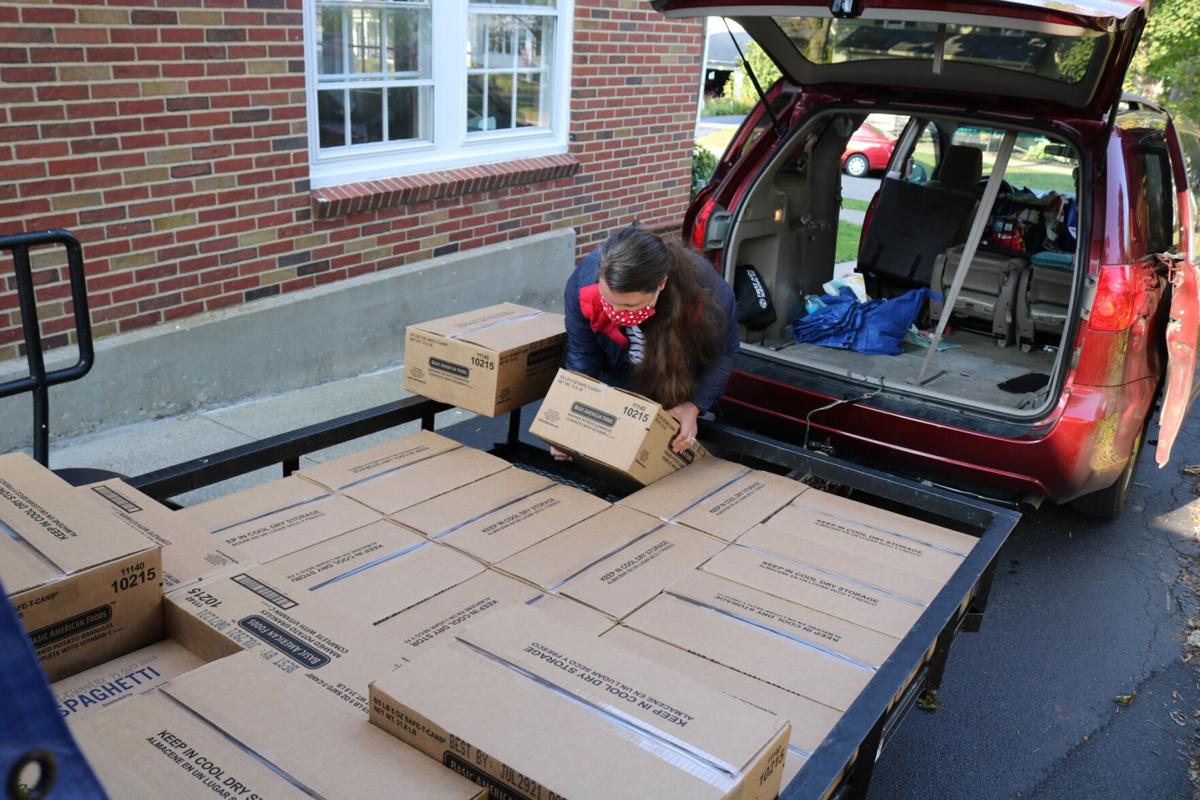 Brendan McDonough/ Livingston County News Members from the Church of Jesus Christ of Latter-day Saints stopped in Geneseo in September to donate three pallets of food to the Geneseo-Groveland Food Pantry.

Provided Photograph The doors at the Geneseo/Groveland Emergency Food Pantry is located at 31 Center Street, in the lower level of the Central Presbyterian Church in Geneseo. The pandemic has brought changes to how the pantry distributes its food.

Brendan McDonough/ Livingston County News Members from the Church of Jesus Christ of Latter-day Saints stopped in Geneseo in September to donate three pallets of food to the Geneseo-Groveland Food Pantry.

GENESEO – With the ongoing coronavirus pandemic, it’s been an understandably busy year for the Geneseo-Groveland Emergency Food Pantry.

“It was originally in the beginning hard when the supply chains were a little bit crazy,” said manager Deb MacLean.

From canned foods to household items, the need was there but getting those products out to the people who needed them, MacLean acknowledge, was a little bit difficult at the start of the pandemic in March 2020.

“Between Foodlink and Wegmans - they were very helpful to us in as far as helping us acquire the things that we needed,” said MacLean.

Across the area, Foodlink was helping by conducting contactless food distributions giving out 25 pound boxes of food to people in need. At first, preregistration was required but then, as the pandemic went on, it became a distribution that was given out on a first come, first served basis. With cars pulling up to different site, as volunteers stepped up to load the boxes of food in their trunks.

For MacLean and her staff, the pandemic also brought changes in how the food at the pantry was given out.

“It does not seem to have changed what people need,” she said. “When were open for the client choice model, that is where people can come in and pick what they want, they have more of a choice of non-food things like toilet products or laundry soap.”

With the pandemic, MacLean says people were not able to do that. Instead, they had to drive up and pick up pre-packaged bags of food.

Staff at the Avon Food Pantry have also had to change how the food was given out.

“Our pantry is a client choice and is set up like a supermarket,” said Director Jennifer Palmer. “With the pandemic, we had to change that and they had to call ahead to get prepackaged food. We would ask them over the phone what they wanted, while still giving them choices and then delivering that food to the client.”

It is something, staff say, has been working out OK, though they admit they miss how things once were.

“We are looking forward to reopening because there is nothing better than seeing the people come and pick up the food that they need according to their diet,” said Palmer.

In addition to delivering the food to clients, staff have also had community distributions outside and sometimes serve upwards of 300 families.

“We have had a lot of donations from the community,” said Palmer. “The local farmers have donated so much.”

Services have also been on the increase at the Geneseo-Groveland Food Pantry.

One of the busiest times over the past year was during the holidays.

“The number of families that we helped over the holiday was up, like, three times as many as we did the year before,” said MacLean.

It has not been an easy year for them but MacLean says what has helped has been the support they’ve received from the community.

“The community has been so generous, not only with monetary but with food donations as well,” she said. “People have been willing to shop for us and people have just really stepped up.”

The food pantry is located at 31 Center St. in Geneseo, on the lower level of Central Presbyterian Church. The pantry is open Tuesday and Thursday from 10 a.m. to 2 p.m. and Wednesday from 4 to 6:30 p.m.

For MacLean it has been a tough year but she says the most difficult part is simply letting people know who they are and what they have to offer.

“We are just trying to figure out how to get the word out that we are there to help people,” said MacLean.

Staff at the Avon Food Pantry are also trying to get the word out to people and let their clients know just how much they miss seeing them.

“It is such a pleasure to see them and get a social time with them,” said Palmer. “We really miss them.”