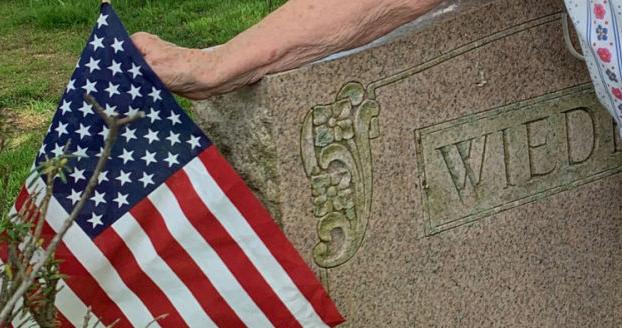 MARK GUTMAN/DAILY NEWSDoris Wiedrich Reid of Caledonia places a flag at her father’s gravesite at Grandview Cemetery in Batavia on Friday afternoon. Her father, Raymond Wiedrich, was a veteran of World War I. 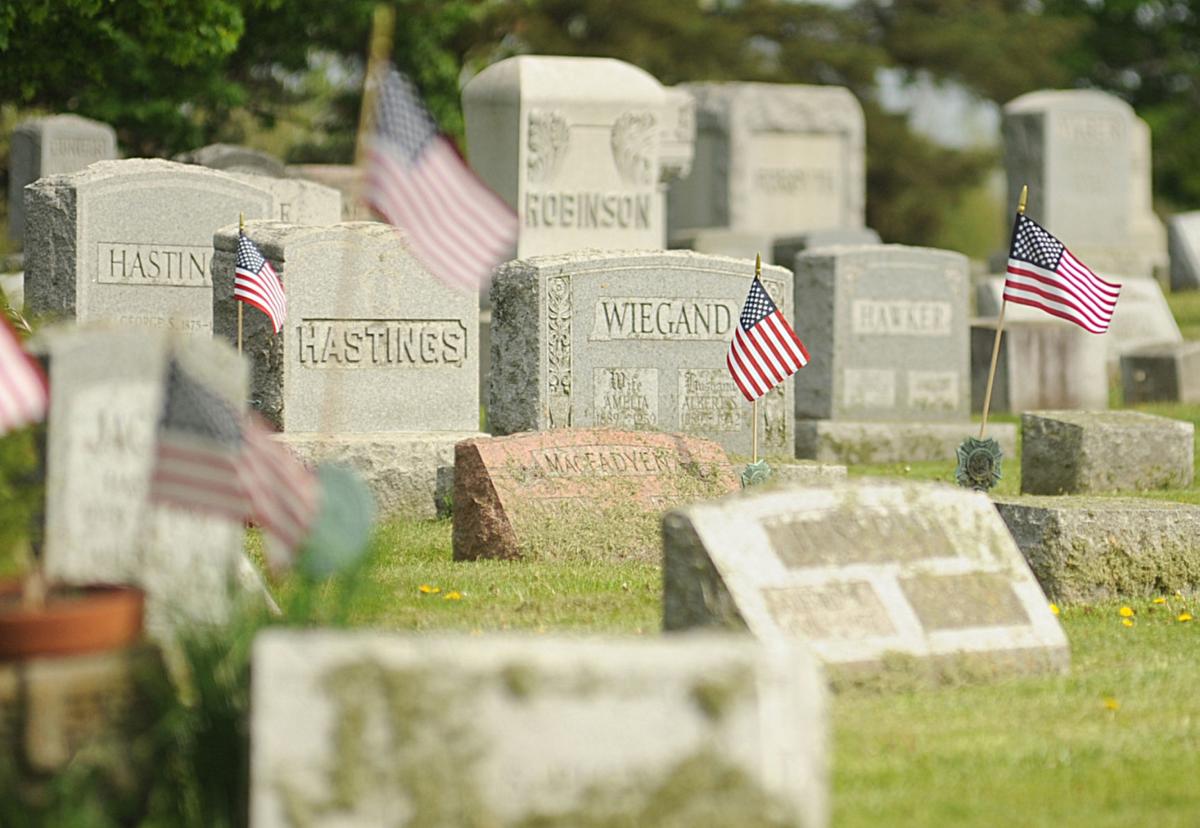 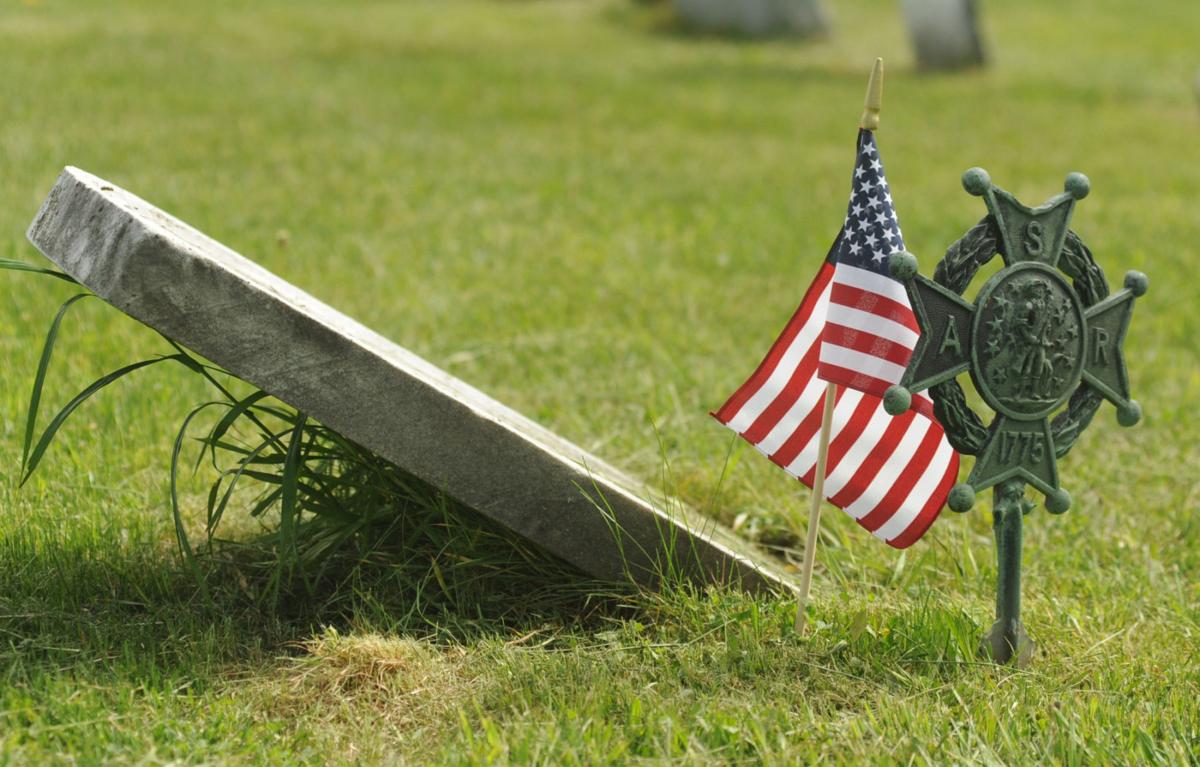 MARK GUTMAN/DAILY NEWS A flag adorns the site of a veteran’s grave at Daws Cemetery on Batavia Elba Townline Road.

MARK GUTMAN/DAILY NEWSDoris Wiedrich Reid of Caledonia places a flag at her father’s gravesite at Grandview Cemetery in Batavia on Friday afternoon. Her father, Raymond Wiedrich, was a veteran of World War I.

MARK GUTMAN/DAILY NEWS A flag adorns the site of a veteran’s grave at Daws Cemetery on Batavia Elba Townline Road.

BATAVIA — With many Memorial Day ceremonies across the four-county GLOW region canceled or closed to the public, this will be a Memorial Day unlike others.

At least one ceremony, in Genesee County, will be available to be viewed online.

County Veterans Service Agency Director William Joyce said people have asked about being allowed to sit in their vehicles across the street from the 10:30 a.m. ceremony at the Jerome Center where the names of county veterans who passed away since last year’s Memorial Day will be read.

“This year when they called, just as recently as a couple of days ago. We had to inform them ‘Yes, we’re going to have it, This year, they can’t come on to the site,’” Joyce said. “They asked me if they can sit in the parking lot across the street. I said ‘I don’t see why not as long as you wear a mask and keep your distance.’ They wanted to listen to their family member’s name being read off and paying honors to them.”

The Daily News will livestream the ceremonies on facebook.com/BataviaDailyNews and the recording will be available on the newspaper’s website at www.thedailynewsonline.com.

“There’s a limitation of 10 individuals. We’ll all be wearing facemasks that were made by the UMMC (United Memorial Medical Center) Guild," said Joyce.

Joyce said he talked to the Batavia Police Department about helping to keep people from coming over to the Jerome Center ceremony. According to Joyce, the department said it would be able to help with that as long as officers aren’t needed elsewhere.

“I strongly encourage (local residents), do not go onto the sites. Let us have the ceremonies to honor the veterans,” he said. “Hopefully next year it will go back to normal. At least the governor is allowing us to perform the ceremonies with 10 people.”

David Dumuhosky, commander of the Glenn S. Loomis Post No. 332 of the American Legion, said these circumstances don’t take away from the meaning of Memorial Day.

“The meaning is definitely always there. Everything we do as far as this holiday especial is in memoriam to those who have gone before,” Dumuhosky said. “We want to honor the names we’re going to be reading. We especially want the families to know that we’re honoring them. Through the media, they can witness it live, they can watch it later. It doesn’t diminish anything as far as the intention of the day with our commitment to it.”

Dumuhosky said the Glenn S. Loomis Post No. 332 Auxiliary members were at Grandview Cemetery on Clinton Street Road and Thursday, where they placed flags next to veterans’ gravesites. On Friday, the American Legion placed flags at Daws Corners Cemetery near Route 98 and Batavia Elba Townline Road in Batavia. The members also placed a wreath.

Today, Dumuhosky said, some American Legion members will meet at 10 a.m. and place flags at Elmwood Cemetery on Harvester Avenue. “They all deserve it and it’s always a shame when somebody gets missed,” he said of placing the flags at veterans’ gravesites. “We always try to double back and catch what hasn’t been done ahead of time. I’ll get together with other commanders in different areas. It’s not just my post. There’s like five organizations in the county that are doing this. We’ll check in with each other ‘Did anybody run out of flags?’ We used to do this differently, but we’re only allowed to have 10 people together ahead of time. We’ve got to get smaller groups and spread it out over a number of days.”

n 9:30 a.m., veterans plot on Harvester Avenue, which honors all war dead of all wars in Elmwood and St. Joseph’s Cemeteries;

n 10 a.m., Upton Monument, which honors the dead of the Civil War, and all wars since; and

n 10:30 a.m., UMMC Jerome Center, the site of the Genesee County War Memorial, honoring all war dead from Genesee County. The names of county veterans who have died since the previous Memorial Day will be read and a flag placed to honor each of them.

In Orleans County, an honor guard from the American Legion and the VFW will be going to each of the monuments in Albion and Medina, where they will conduct a 21-gun salute.

In Medina, the ceremony will end in front of the cannon at State Street Park where a list of names of veterans who died this past year will be read.

Members will gather 10 a.m. at the monument on Main Street. They’ll travel by vehicle — no parade — to the veterans memorial at Warsaw Cemetery to fire rifles, and then across the street to honor Walter Klein and the Warsaw Fire Department.

n PERRY — The Village of Perry has canceled this year’s annual parade. Individual events will be conducted at cemeteries but none are set as public events.

n SILVER SPRINGS — Bates Courtney Post No. 105 of the American Legion has also canceled its annual commemoration. People are encouraged to visit the graves of veterans and other family members.

One of the few events happening this weekend will be at Stokoe Farms which is located at 656 South Road, Scottsville.

It will be a farmside takeout. The goal is to boost people’s spirits due to the lack of memorial day parades.

Served up will be pulled pork sandwich smothered in Sweet Baby Rays BBQ sauce, with crispy onion straws and served on a craft bun. Also on the menu is a crunchy cole slaw and salt potatoes. There will also be an 8-ounce serving of mac ‘n cheese, with a side of apple sauce. All meals are served with a bottle of water.