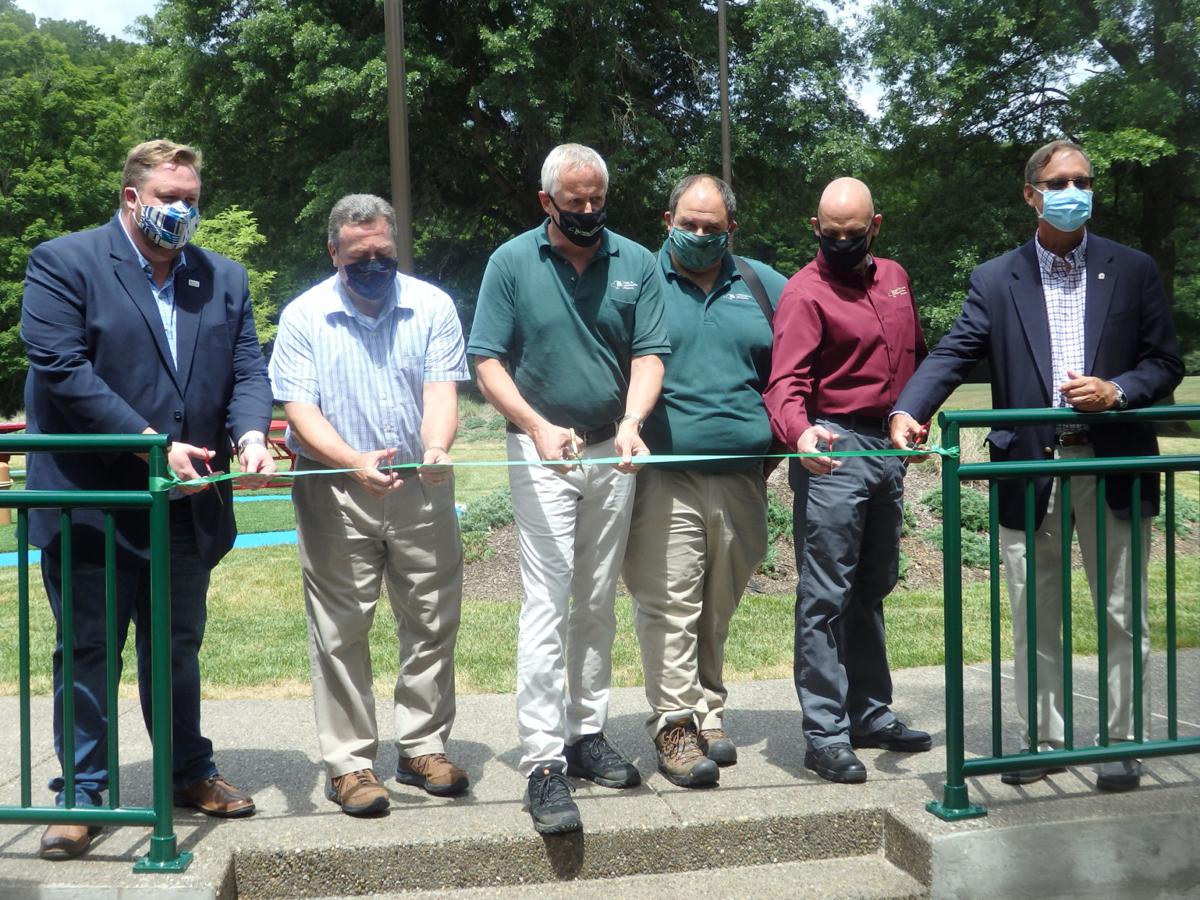 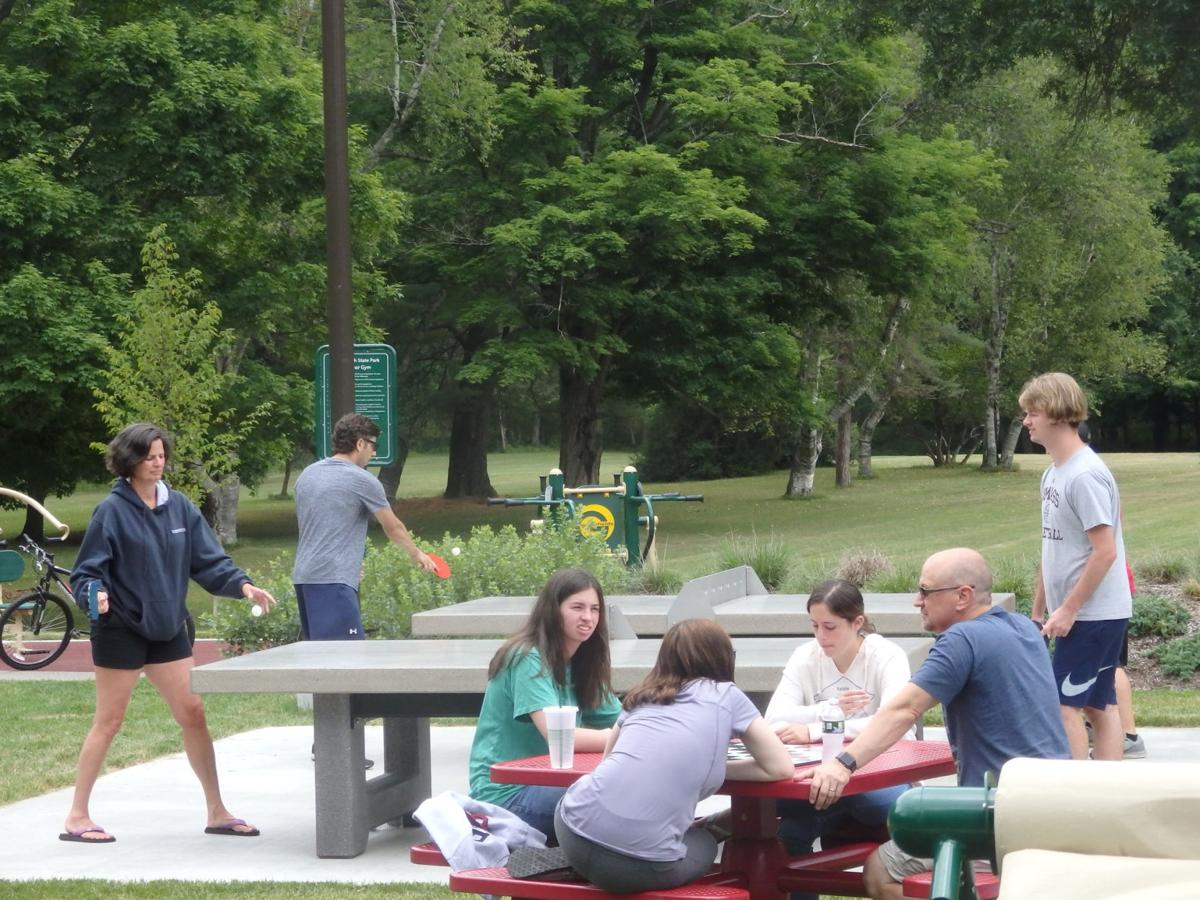 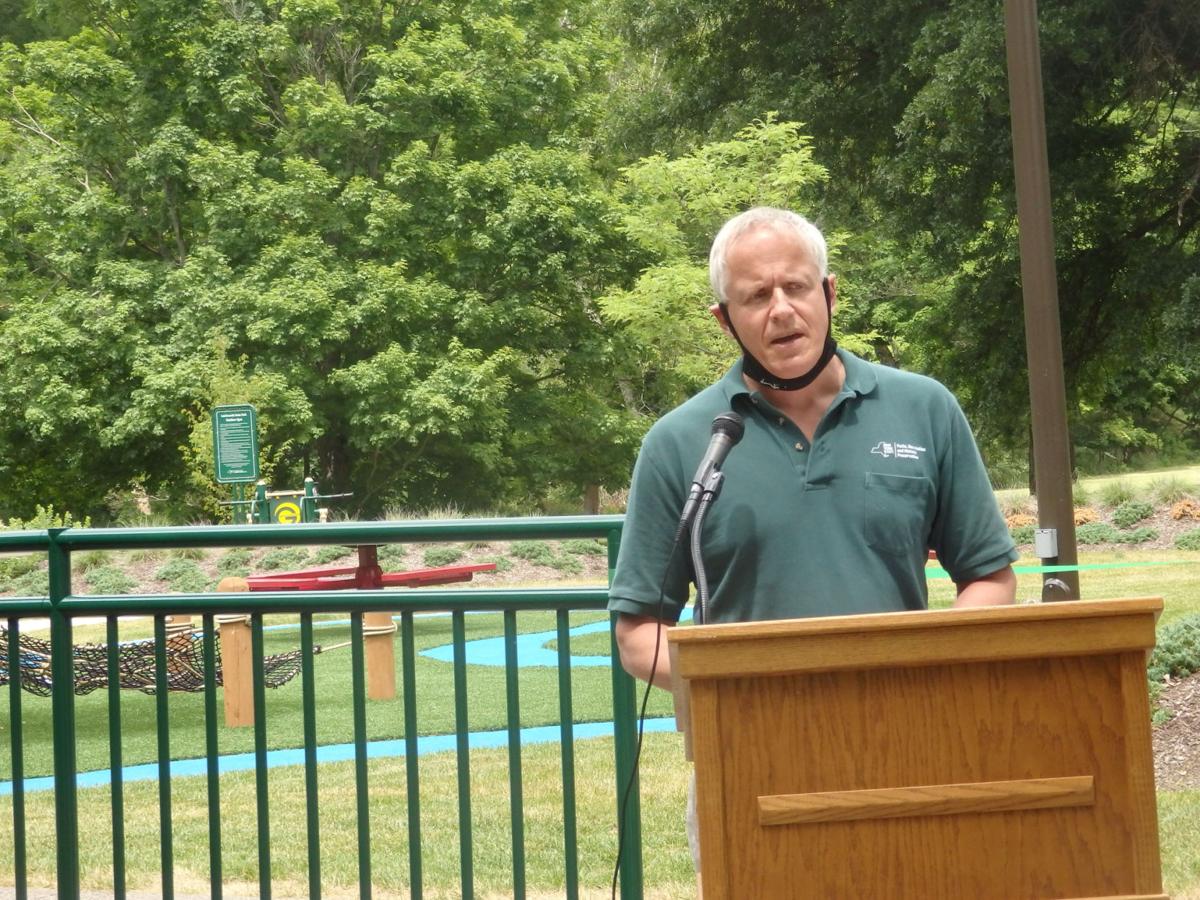 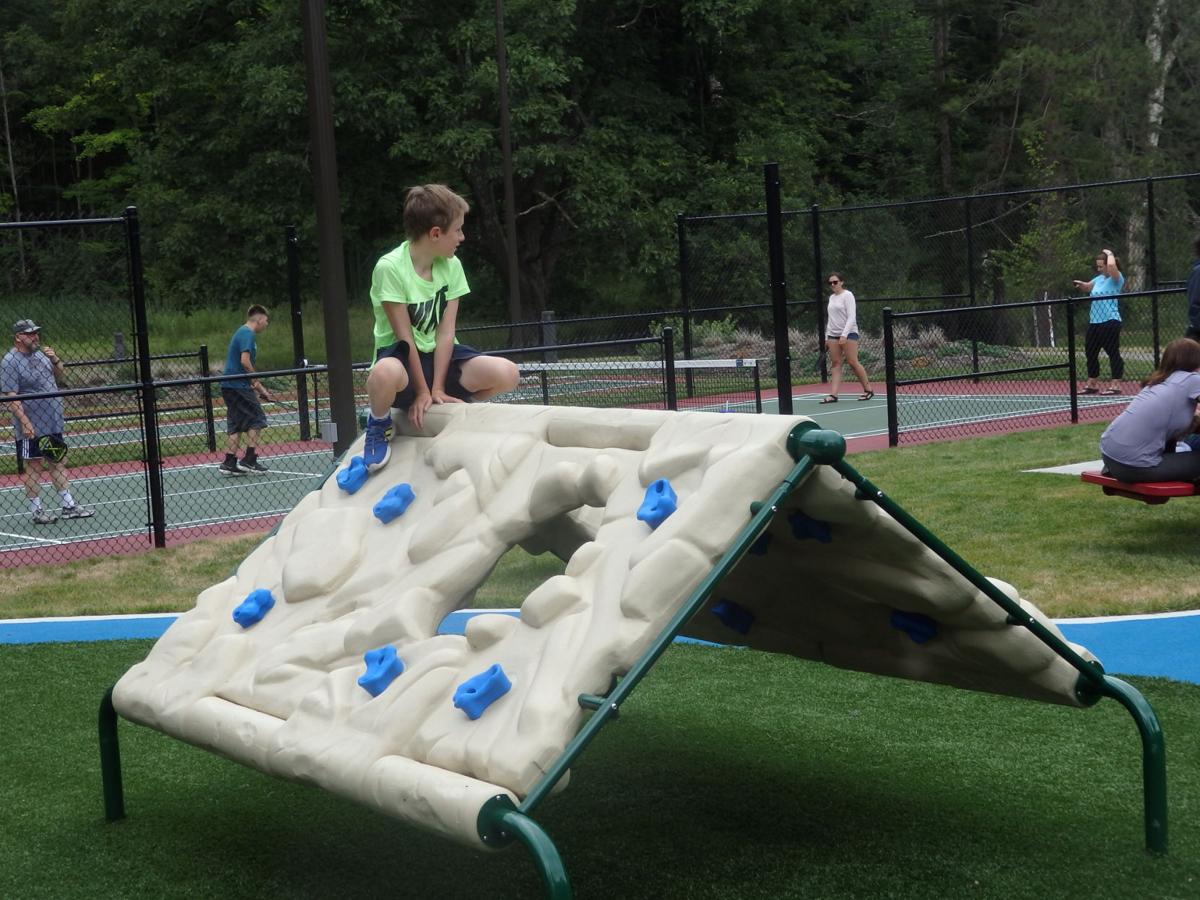 Colin Hopkins uses a climbing wall at the Lower Falls Recreation Area as families play pickleball in the background. 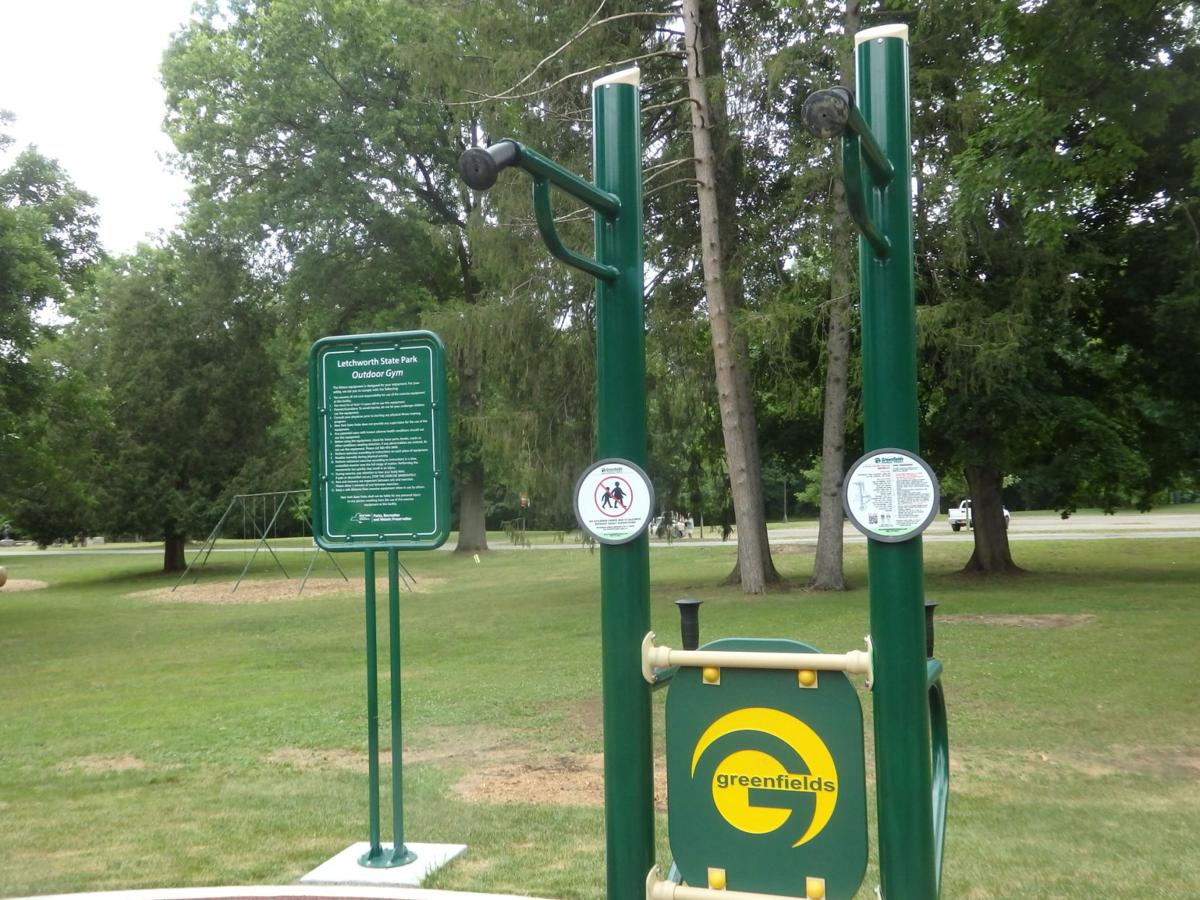 A piece of outdoor exercise gear is one of several at the Lower Falls Recreation Area. 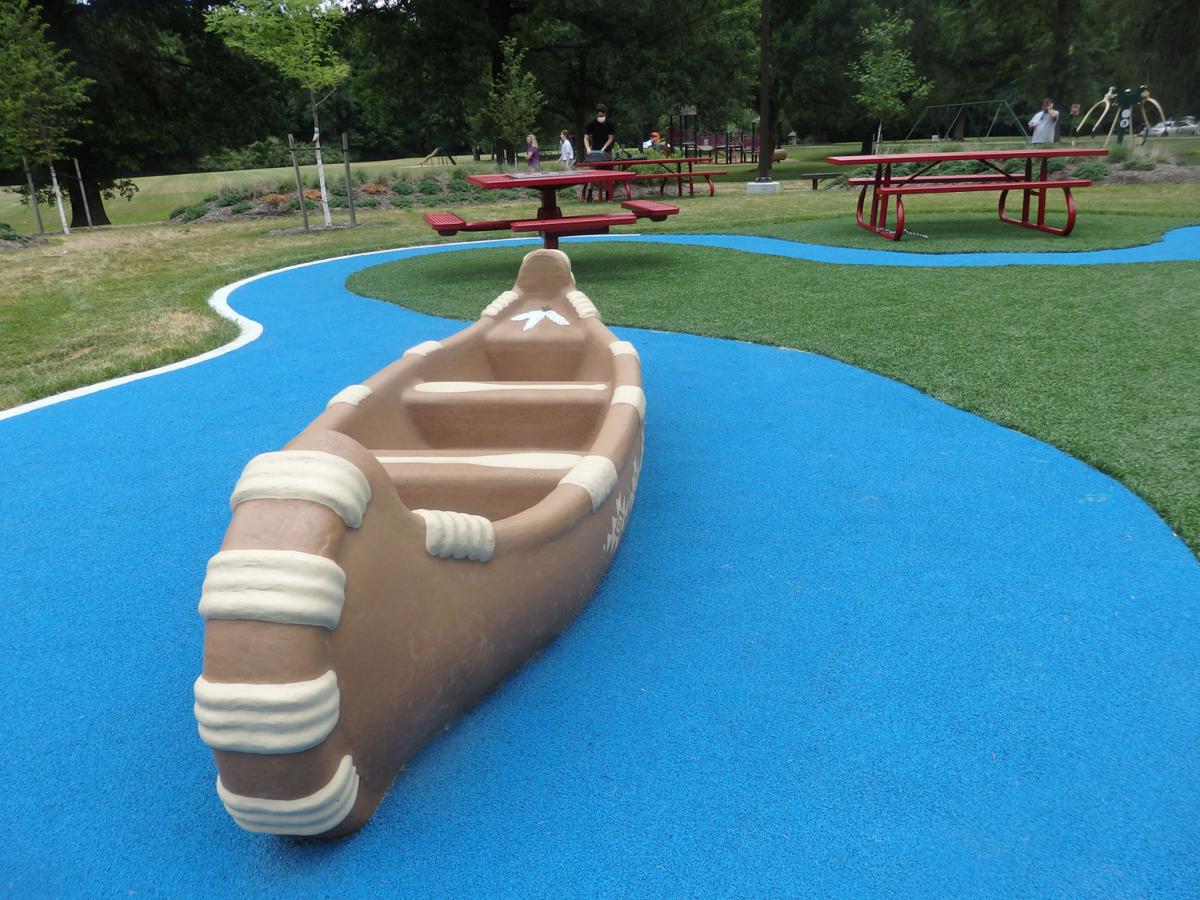 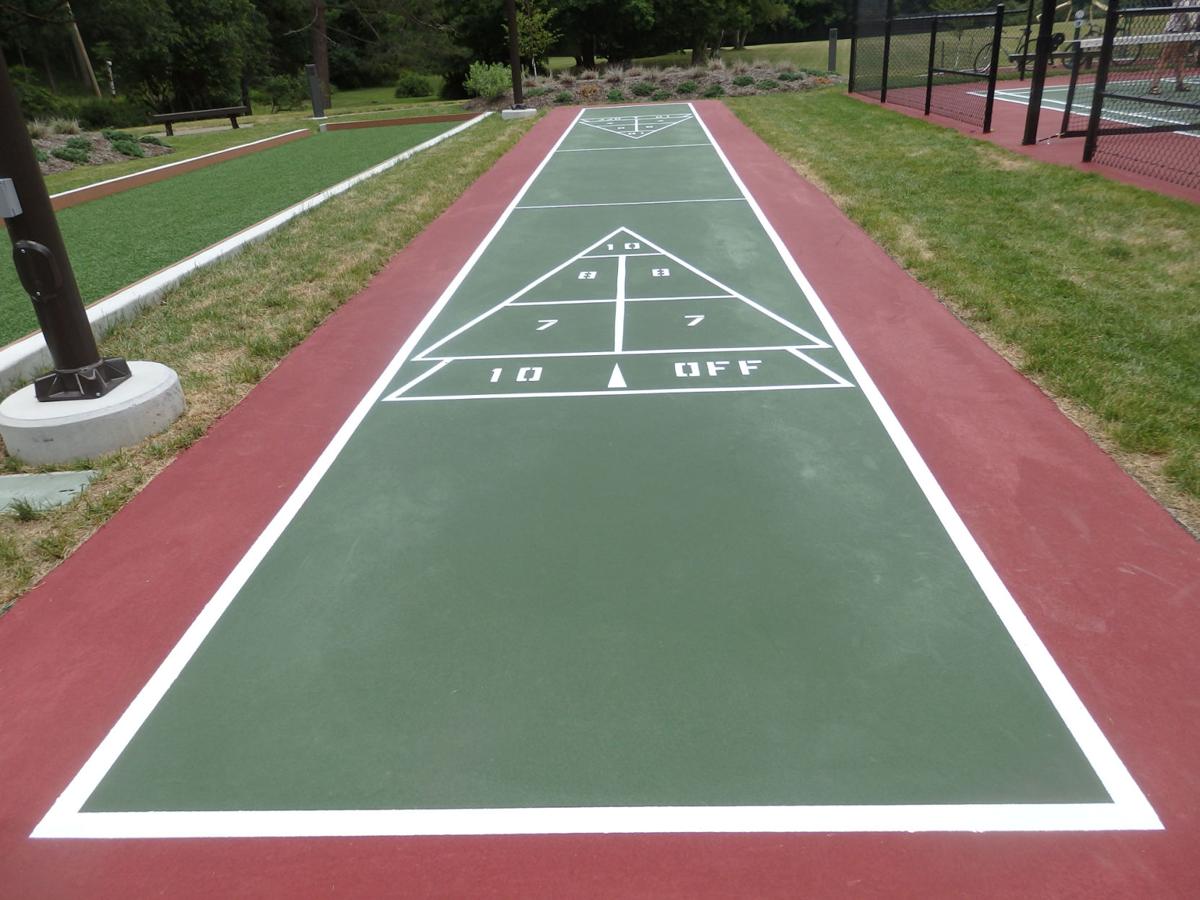 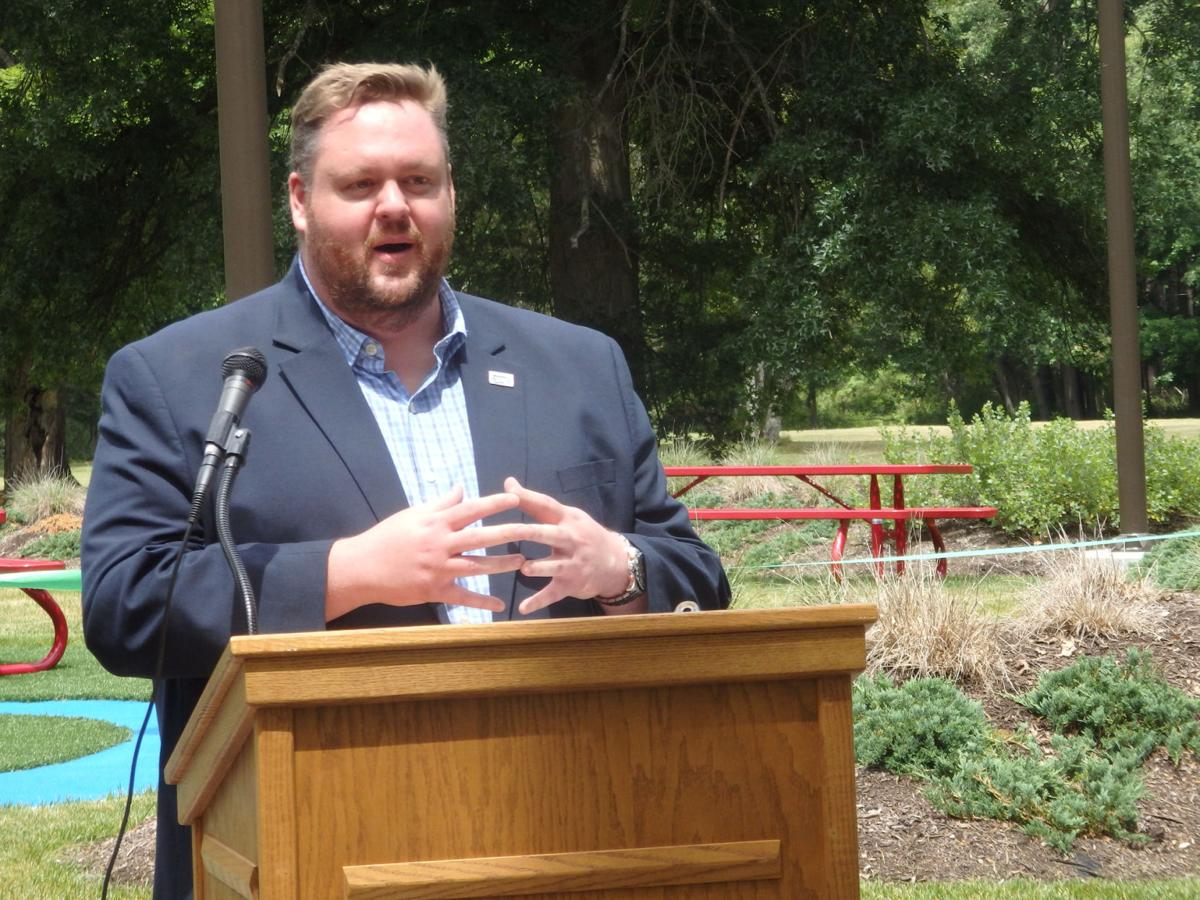 Colin Hopkins uses a climbing wall at the Lower Falls Recreation Area as families play pickleball in the background.

A piece of outdoor exercise gear is one of several at the Lower Falls Recreation Area.

The 10-year-old from Erie County soon jumped off, but climbed up again a minute later. Other families played ping-pong and pickleball at tables and courts a few yards away.

The location is exactly what state park officials and employees had aimed for. And they couldn’t be happier, as they described during an early-afternoon dedication ceremony.

“You can just tell when they come out,” said Park Manager Douglas Kelly afterward. “You see a lot of people and you talk to a lot of people. Obviously a lot of them are coming from Rochester and Buffalo.

“You can tell when they’re walking around that they don’t have anything else on their mind,” he continued. “You can see the relief on their faces. There’s a satisfying feeling that comes with that, and being able to provide that, and having a place that’s open and clean for them to come.”

The $2 million recreation area opened July 3 in the park’s Lower Falls area. It replaces the park’s former south pool that had been out of use since 2007.

It’s a significant innovation. Besides the pickleball court, ping-pong tables and climbing wall, the recreation area also features outdoor exercise equipment, bocce and shuffleboard courts, and a large-size canoe toy on a surface decorated to mimic the Genesee River’s path.

The pool’s old bathhouse has also been restored and will continue to serve as a base for Adventure Calls Outfitters.

Officials said the old pool had been a veritable “black hole” at the location, which is otherwise highly popular with park visitors, tourists and campers.

The recreation center was dedicated by officials including State Parks Commissioner Erik Kulleseid, who spoke on behalf of Gov. Andrew Cuomo.

Kulleseid noted the park’s reputation as “The Grand Canyon of the East” and its 2015 recognition as the nation’s best state park.

“It’s been an honor and a privilege to be here,” he said. “To be able to have the parks open and be able to provide a place for people to get out. It was like the one place for people to find solace and peace in this whole pandemic, and places like Letchworth, which are so important to people’s souls, are great to be open and welcoming people.”

Eric Szucs, director of tourism and marketing for the Wyoming County Chamber of Commerce and Tourism, described Letchworth State Park as a gem which has been ingrained in the area and its culture for generations.

Szucs said the park’s guests also visit the surrounding community, supporting local businesses in the process. He said the park attracts a global audience, and is important to Western New York and the Finger Lakes as a whole.

The Lower Falls Recreation Area was completed as part of the state’s Parks 2020 program.

“To be here today and add this wonderful rec area — another place in the park for people to come and have another outdoor experience here, in addition to everything that’s already here, is absolutely wonderful,” Szucs said.