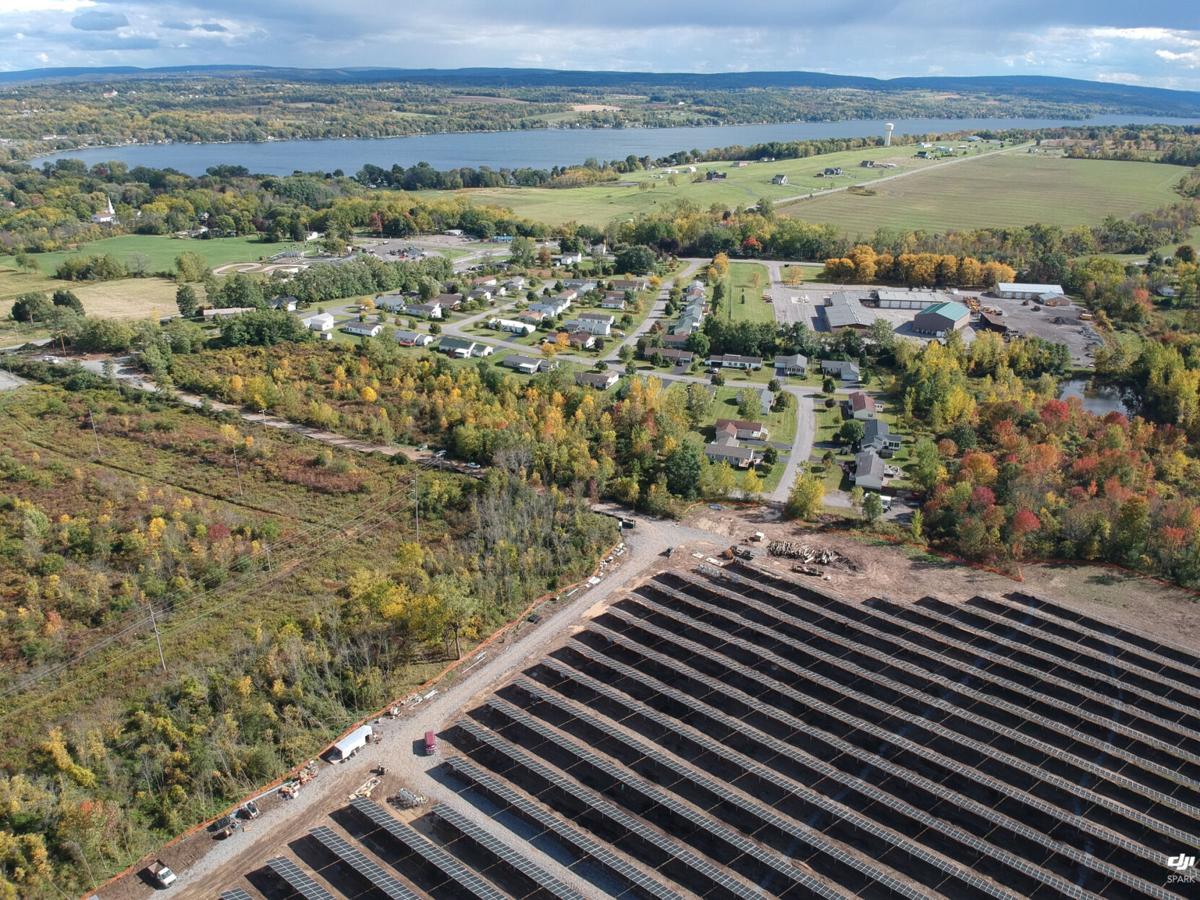 Photo courtesy of Lakeville Village A new 18-acre community solar array is seen in the town of Geneseo near the north end of Conesus Lake. The four-megawatt array is expected to produce enough energy annually to power about 440 average homes. 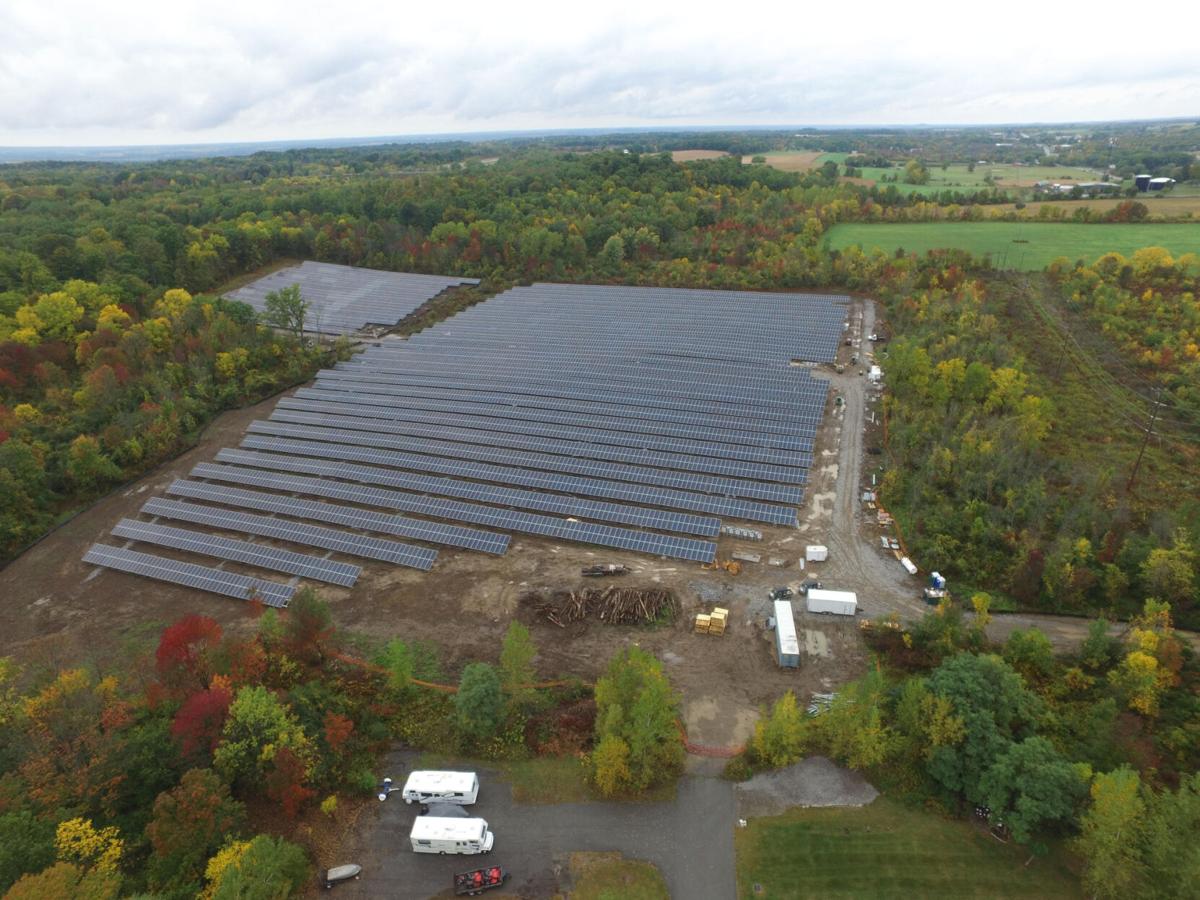 Photo courtesy of RER Energy Group A new 18-acre community solar array is seen in the town of Geneseo near the north end of Conesus Lake. The four-megawatt array is expected to produce enough energy annually to power about 440 average homes.

Photo courtesy of Lakeville Village A new 18-acre community solar array is seen in the town of Geneseo near the north end of Conesus Lake. The four-megawatt array is expected to produce enough energy annually to power about 440 average homes.

Photo courtesy of RER Energy Group A new 18-acre community solar array is seen in the town of Geneseo near the north end of Conesus Lake. The four-megawatt array is expected to produce enough energy annually to power about 440 average homes.

Previous Lakeville Village owners Bob Morgan and Jeff Cohen had planned on a second phase of development that would have made use of 40 undeveloped acres north of the existing community, Lakeville Village President and community resident Richard Nereau told the County News during an interview in 2016.

After residents purchased the community in summer 2016 however, they started exploring the prospect of constructing a solar array on the undeveloped acreage, which is adjacent to a National Grid substation.

“The original owner of the community had anticipated a second phase for the construction of additional homes, but it never came to fruition,” said Ron Palmer, a Lakeville Village member-owner, during an interview with Resident Owned Communities-USA, a non-profit that helps manufactured home residents purchase their communities. “This provided an opportunity for us to consider other options. When we became a ROC in 2016, the solar project really started to come to the forefront.”

The finished array sits on 18 acres west of West Lake Road and north of the existing Lakeville Village community, which itself is situated north of Route 20A (Lakeville Road) in the town of Geneseo, near Minnehans.

It was developed by RER Energy Group and Larsen Engineers. Sunvestment and Bullrock Solar provided financing. The project also received $700,000 in state funding through the NY-Sun program, which aims to advance projects that will help meet Gov. Andrew Cuomo’s goal of drawing 70 percent of New York’s electricity from renewable sources by 2030.

Speaking during Thursday’s ribbon-cutting, which was conducted remotely over Zoom due to the pandemic, Palmer credited his fellow Lakeville Village member-owners for “their forward thinking and patience” during the development and construction of the array, a process which took several years.

“Our community has recognized the importance of being good stewards of what God has provided for us,” said Palmer, who is also a pastor at the Allens Hill and Canadice United Methodist churches. “I was reminded of the Scripture taken from the Old Testament that, in God’s hand is the life of every creature and the breath of all humankind. We’re reminded of this in a Native American proverb that also reminds us we do not inherit the Earth from our ancestors, we borrow it from our children.”

As a community solar project, the array allows any National Grid customer in New York to sign up for a subscription plan through the company. Solar energy generated by the array will appear as monetary credits on subscribers’ electricity bills, lowering the costs they pay to National Grid for electricity. Depending on the size of a subscription, participants in the program can save up to 10 percent annually on electricity, according to RER Energy Group.

About 350 residential customers have already subscribed to the credit program, as have “several commercial subscribers,” an RER spokesperson said last week.

While the subscription program is available to any New York resident in National Grid’s territory, project developers said they’re holding back some of the available slots for nearby residents to ensure the benefits of the project are available in the local community.

“We can likely accommodate 20 to 30 more residential customers or perhaps five to 10 smaller commercial subscribers, or some mix of that,” said the spokesperson.

Another unique dimension of the project is its financing and planned long-term ownership.

“Sunvestment has established joint ownership opportunities for this array with the local partners involved in the project and are still discussing ownership opportunities with additional community members,” said Sunvestment President Jim Kurtz. “At Sunvestment, we strive to make communities stronger through solar, and keeping more of the financial value of a solar array with the partner and local participants allows us to do that.”

Kurtz, who also serves as president of RER Energy, called it “fitting” that Thursday’s ribbon-cutting was held to coincide with Earth Day. First observed in 1970 “when the collective consciousness of our country around the harms we were doing to the planet reached a tipping point,” Kurtz said the day has now come to be synonymous with humanity’s battle to save itself from climate change.

“Transformative change must occur if we’re to preserve a plant that is hospitable to us, our children and their children,” Kurtz said. “Energy innovation is a key component of this transformation. Solar energy, such as the Lakeville Comm Solar project that we celebrate today, is one example of the energy innovation that must occur if we’re to avoid the worst effects of climate change.”

Ram Shrivastava, president of Larsen Engineering, which worked on the Lakeville Village array, said the project was unique and could serve as an example of how other similar communities could use extra or unused land.

“These projects truly are worth supporting – hopefully without any grants, some day,” Shrivastava said.

RER recently completed a similar array near Saranac Lake in the Adirondacks and is in the later stages of development for another one south of Plattsburgh in Clinton County.

“In Livingston County we are actively looking to identify parcels and landowners as candidates for new community solar projects, and encourage anyone that is interested to reach out to us,” said the spokesperson.

To learn more about the Lakeville Village array and begin the subscription process, go to LakevilleSolar.com. Those interested in subscribing can also contact Conrad Karsten, RER Energy Group’s community solar project manager at ckarsten@rerenergygroup.com or by calling (585) 443-8130.