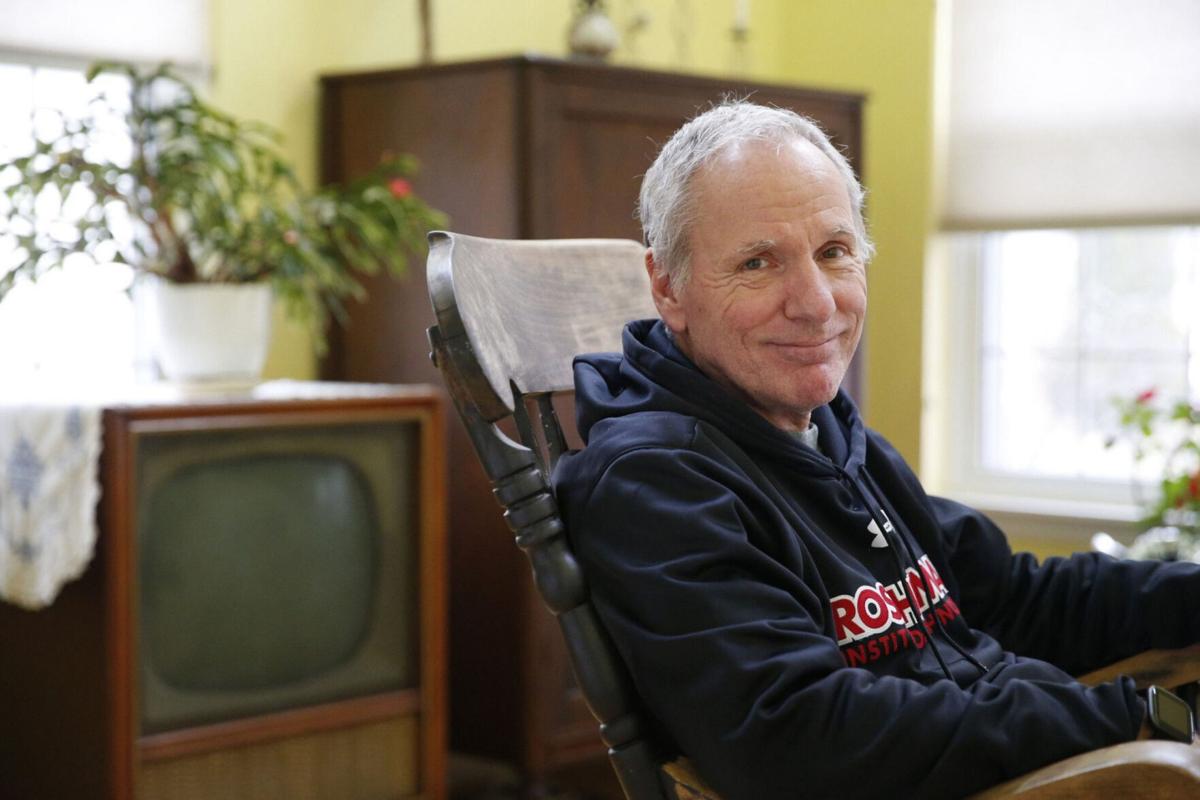 Stacey Wescott / Chicago Tribune/TNSSpiro Roberts is seen at his Wheeling home March 15, 2021. He’s 64 and waiting for a COVID-19 vaccine. 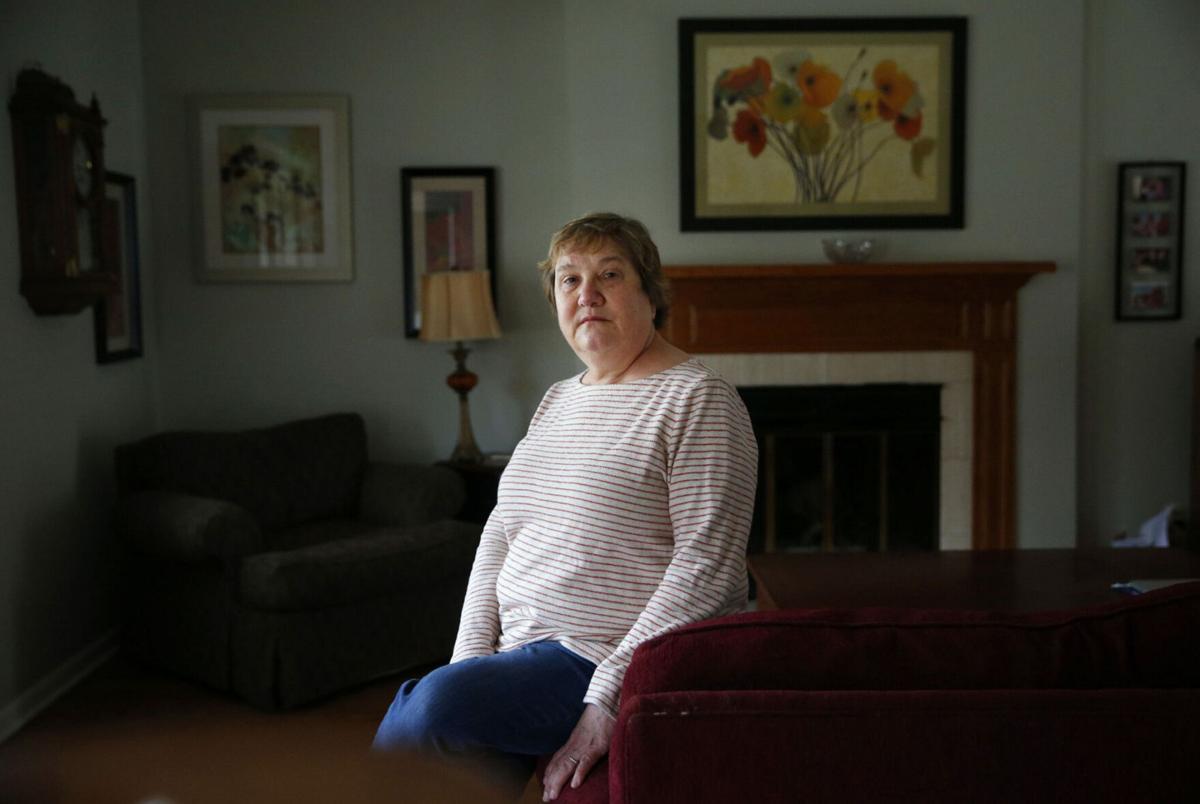 Stacey Wescott/Chicago Tribune/TNSBeth Bales Olson is seen at her home in Geneva on March 15, 2021. She is 64 and was just scheduled for her first vaccine on March 18, 2021, at Northwestern Memorial Hospital in Chicago.

Stacey Wescott / Chicago Tribune/TNSSpiro Roberts is seen at his Wheeling home March 15, 2021. He’s 64 and waiting for a COVID-19 vaccine.

Stacey Wescott/Chicago Tribune/TNSBeth Bales Olson is seen at her home in Geneva on March 15, 2021. She is 64 and was just scheduled for her first vaccine on March 18, 2021, at Northwestern Memorial Hospital in Chicago.

(TNS) – Vaccinations are underway, but the magic number to become vaccinated is age 65.

This is the recommendation from the Centers for Disease Control and Prevention. An Illinois Department of Public Health spokeswoman said eligibility for the next phase, 1c, is still being decided. But right now in Illinois, people 65 and older are eligible to be vaccinated.

For people who are just shy of that number, it’s a bittersweet time. Some who spoke to the Tribune expressed hope at being vaccinated in the coming months but frustration at seeing friends and even spouses already vaccinated. One described the feeling as “vaccine purgatory.”

Others were dismayed to be at relatively the same health risk as those allowed to be vaccinated — a few months’ difference — but treated the same as healthy young adults.

Here are five of their stories.

This time feels like “vaccine purgatory,” says Spiro Roberts, 64, a retiree who lives in Wheeling.

He and his wife retired last March, right when the state began shutting down.

“While we both are enjoying retirement, it hasn’t begun the way we envisioned it,” he said.

He is happy to be in relatively good health, he said, and does not have any underlying conditions that would allow him to get a vaccine.

Still, the age 65 requirement makes it hard not to focus on his own age. Roberts will turn 65 in late April. He has his annual physical slated for early in the month, he said, and plans to ask then about when and how he will be able to access a vaccine after his birthday.

“I try not to think too much about my age, but quite honestly with this pandemic, it has been a little bit hard not to think about it,” he said.

He plans to get the COVID-19 vaccine as soon as he is eligible.

As a higher education teacher, she does not qualify for a vaccine, she said, even as she spends four days a week in a classroom with students 18 to 24 years old.

Before the vaccine, she said, “turning 65 has really not even been on my radar.”

But now, the Rogers Park resident said, “As I watch people who are only a few months older than me getting vaccinated and realize that my being 47 days shy of 65 keeps me from getting vaccinated, I find myself very frustrated.”

She knows that a cutoff is necessary, but she said being so close to eligibility feels even more frustrating than being far removed from it.

Her husband is 83 with underlying health conditions and has been vaccinated. But because she is not vaccinated, the couple are still limited in what they can do.

“I look at some of my friends who are 65 and retired and stay home most of the time — and are vaccinated — and I count the days until I turn 65,” she said.

As she approaches her 65th birthday in May, Beth Bales Olson feels a mix of emotions.

With a new vaccine recently approved and more and more people getting vaccinated, she feels hopeful.

And the Geneva resident feels lucky — her three daughters are grown, so she does not have to navigate remote schooling, a clear stressor for many others. Self-employed, she knows she would have had to cut back on work if that were the case. So she knows she and her family have largely been lucky.

“I really, really think we’re seeing light at the end of the tunnel,” she said.

But she also is feeling some birthday envy.

“I haven’t wanted a birthday to come so badly since I was a kid,” she said. “Two of my good friends have earlier birthdays and are already completely done, and the rest of us are quite envious.”

She wonders whether a vaccination phase should include people ages 55 to 65 but laments, “No one sought my guidance.”

So she has been spending her days checking her inbox just in case she has suddenly become eligible for a vaccine.

Recently, that happened. She received a notice that because of her asthma and new appointment availability, she was eligible to get her first vaccine Thursday.

The pandemic has encouraged Denise James to have healthier habits.

The 64-year-old said she lost 20 pounds in the past year and was fortunate to feel in good health overall. She also added 20 minutes of meditation and 20 minutes of yoga each day, listening to classical music that reminds her of her uncle while her dog sits nearby.

“COVID encouraged this 64-year-old to take control of her health,” she said.

As the Willowbrook resident watched others get vaccinated, she said, she had a bit of “COVID envy,” but felt “mostly overwhelmingly joyful that those over 65 are getting vaccines.”

She added, “I am smart enough to know it is a rule that is mostly a good rule. I see the benefits to me with less people getting COVID to spread to me, less people in ICU.”

After becoming eligible because of her weight, she received her first vaccine Thursday at a Walgreens.

Before this year, John Haas and his wife seemed pretty much the same age.

But during the pandemic, with her being 65 and him being 64, they seemed a world apart.

“She got the shot very fast, here in Indiana, and I was feeling a little odd about it,” said Haas, who lives in South Bend. “We don’t typically have life-saving procedures doled out that way.”

As a professor, he comes into contact with many people, and he was feeling, he said, like, “Hey, I need it more than her!”

Eventually, he found a waiting list that people could join for notification when places had leftover shots. His wife signed him up. A few days later, she got a call, and within an hour he had his first vaccination shot.

He will get his second shot this week.

Visit the Chicago Tribune at www.chicagotribune.com