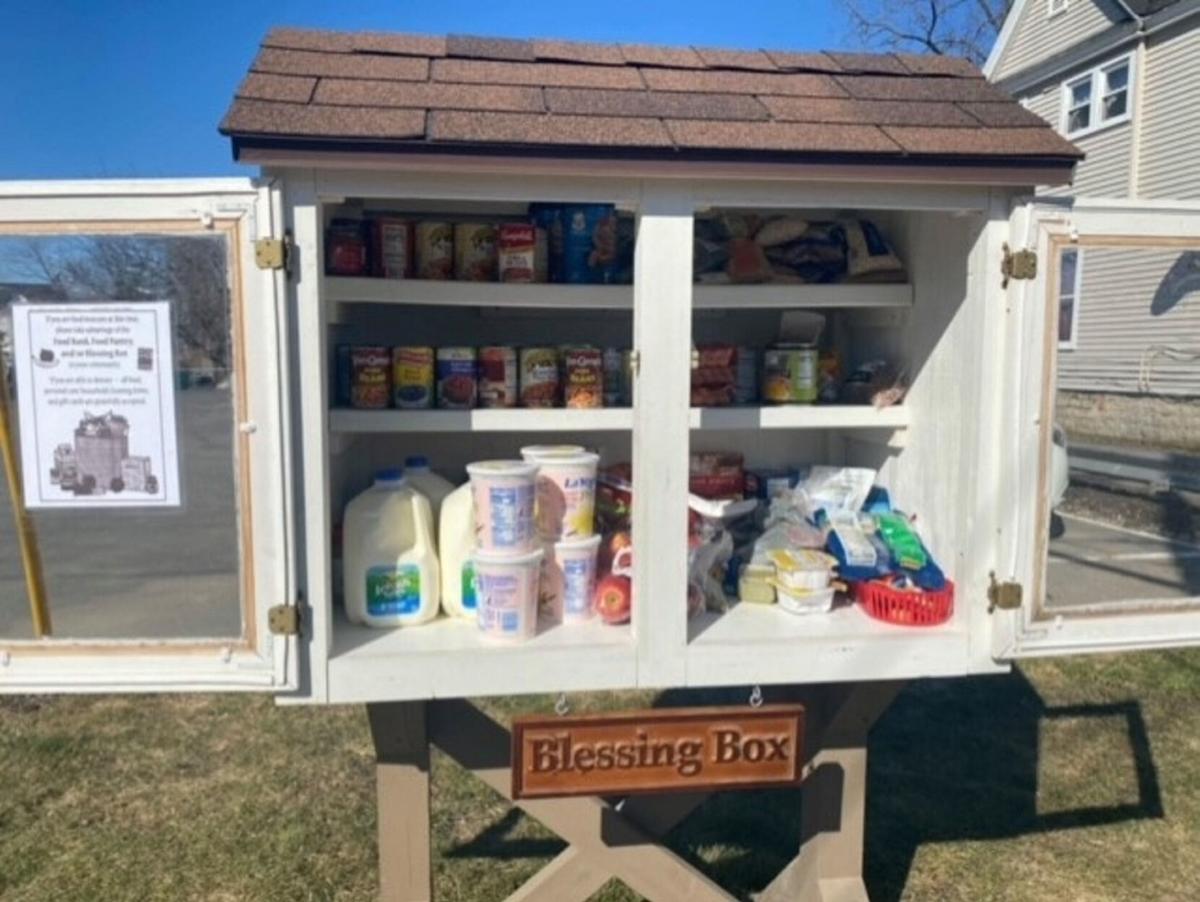 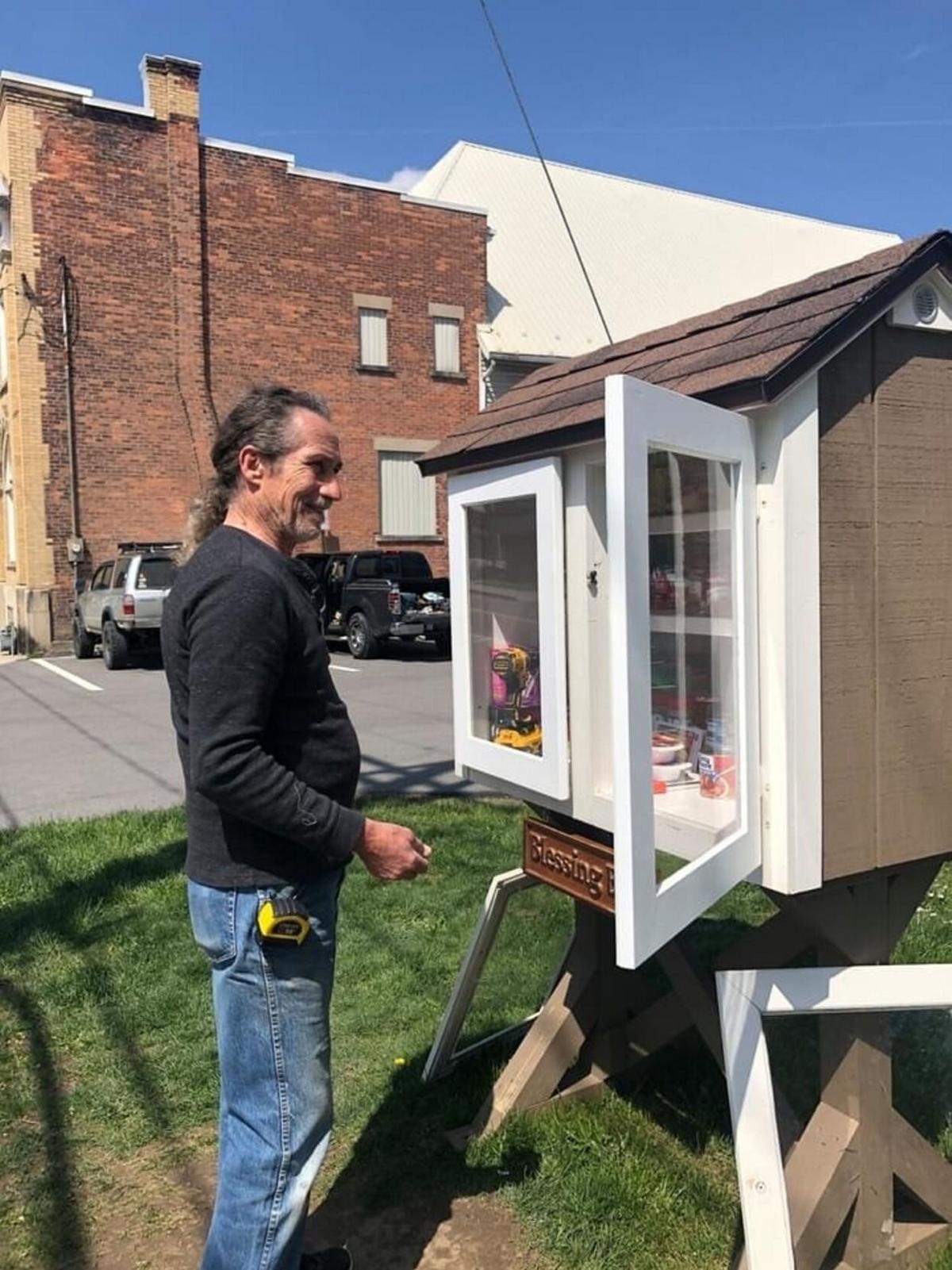 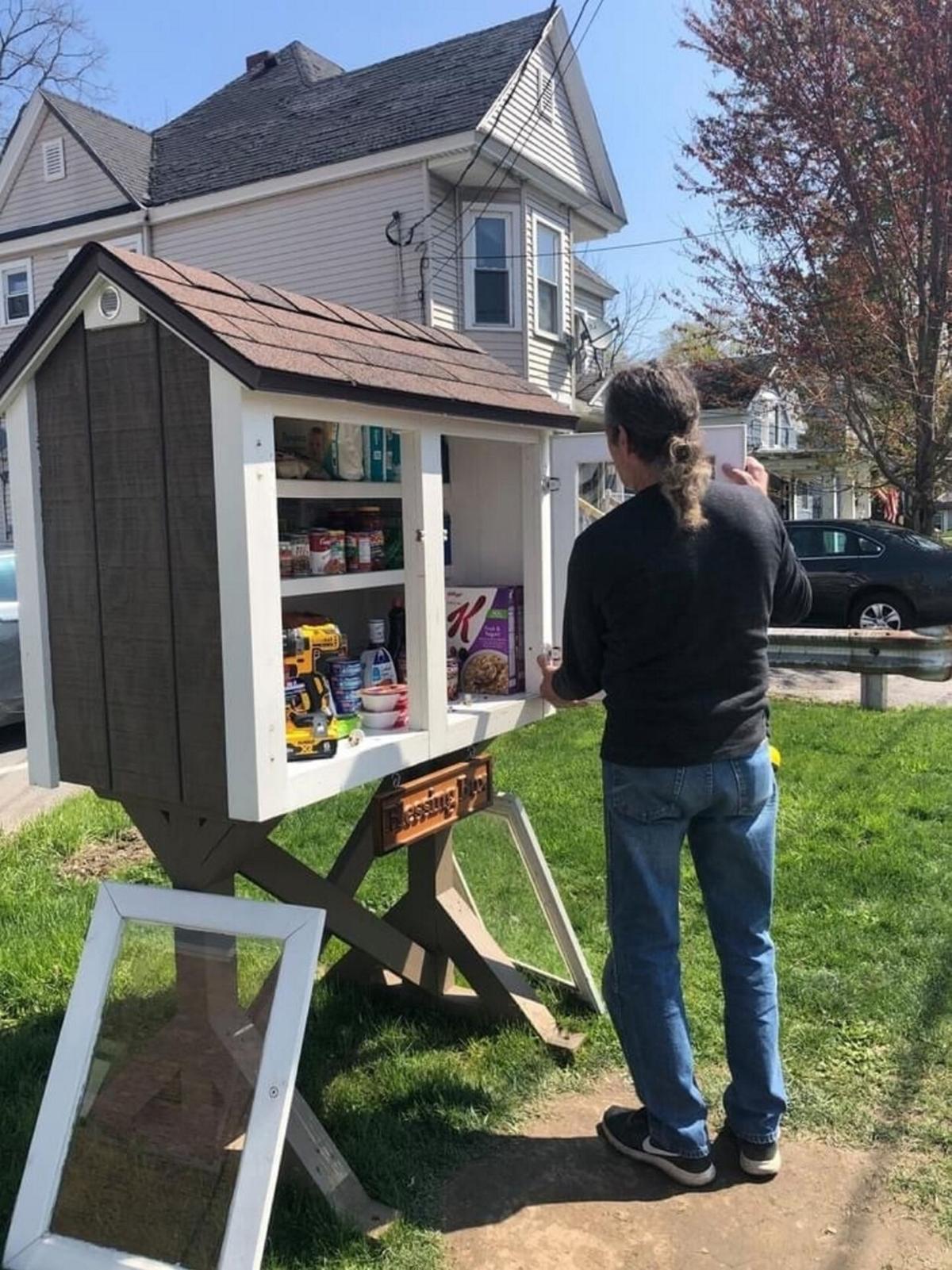 Last year, during a chaotic time when uncertainty of the future loomed around every corner as the pandemic continued to develop, Attica resident, Cathy Forgnone, saw a post on social media featuring blessing boxes (BB) that were popping up in the Outer Banks, North Carolina.

A blessing box is exactly what it sounds like. A permanent location where toiletries, pantry food like canned good, and other donated items can be either donated or picked up to bless someone in need.

“I was excited when I read the post and thought Attica would be a good place to start one,” said Cathy.

She sought the help of her husband, Mike Forgnone, and friend, Cheryl Goodridge, to create a Blessing Box that would be accessible to the residents of Attica.

“They both thought it was a great idea. It’s really amazing how God put it all together,” said Cathy.

Another of Cathy’s friends, Mary Jo Schilling, wanted to get involved and she volunteered her husband, Bob Schmieder, to help build the box.

Before they launched the project, the group contacted Village of Attica Mayor Nathan Montford, and Doug Post at the Village Office.

“They loved the idea and it was presented to the village board. They unanimously agreed it could be put on Village property,” said Cathy.

Once they received the green light, Cathy and Cheryl created a design that wanted to execute.

“We wanted it to be larger than the ones we saw online. After giving Bob a sketch of what we wanted, he put his skills to work and built a very sturdy Blessing Box,” said Cathy.

Bob donated his labor to the project, while Cheryl, Diane Forgnone, and Cathy paid for the materials.

Additional donated materials included: shingles, plexiglass, and drip edge, which were donated by Aaron Forgnone, Cathy’s son, who also made the sign for the Blessing Box. Lynn Camp at Attica Hardware volunteered his time to cut the plexiglass to size.

“We put the finished product up two days after Thanksgiving in 2019. It started out slow but as word got around, more people started donating and more items were being taken,” said Cathy.

Attica’s Blessing Box is open 24 hours. Anyone in need is welcomed and encouraged to take from the box.

The group of friends and family who launched the idea of starting a blessing box in Attica are so grateful for the support from fellow community members.

“The amount of support we receive from the community is amazing. Last November, Lyons Automotive held a food drive and donated all the boxes of food they received to the BB. Mugs & More donated two large amounts of money from t-shirt sales in late winter. We have a gentleman who has given us several large cash donations to buy whatever is needed. He also purchased 75 tickets for the Gateway Chicken Barbecue in May for us to give to needy area families just to bring them a special treat,” said Cathy.

She continues, “We also have some regular donors who give us money to purchase items for the BB. A few people have donated their birthday money and one woman donated money in memory of her friend who passed away. I just received a private message last night from a man who mows lawn for some elderly people in Attica for free. He just asks them to give him a donation. He is giving the donations he received in July to us to buy items for the BB.”

Attica’s Blessing Box on Main St., Attica, is across from Upstate Chevy on Village property.

“Attica is a wonderful community filled with so many generous people!” said Cathy. “The impact the BB is making on the community is far more reaching than any of us expected. We have a Facebook page set up and receive many requests from individuals for items they are in need of.

Taking it even further than filling the box with necessary, needed items, those running the blessing box, as well as, Attica residents, responded to a neighbor in need.

In the spring, the blessing box received a request on their Facebook page about an elderly woman living in the village who needed assistance.

“When we reached out to the community on Facebook, the response was overwhelming! A bed, recliner, kitchen table and chairs, sheets, blankets, a comforter, kitchen and bath towels, curtains and curtain rods were all donated. We also received some cash donations to help her out. A man who graduated from Attica but lives out of state sent us a check, so we could give the money to her,” exclaimed Cathy.

The blessing box concept continues to gain momentum throughout the Country. Cathy’s sister was so moved by the idea of a blessing box, she launched a blessing box of her own with her pastor in Java Village.

“We really want to thank the community for all their support. The support we have received has exceeded our expectations and continues to grow every day. Without everyone working together, the BB would not be a success,” said Cathy.