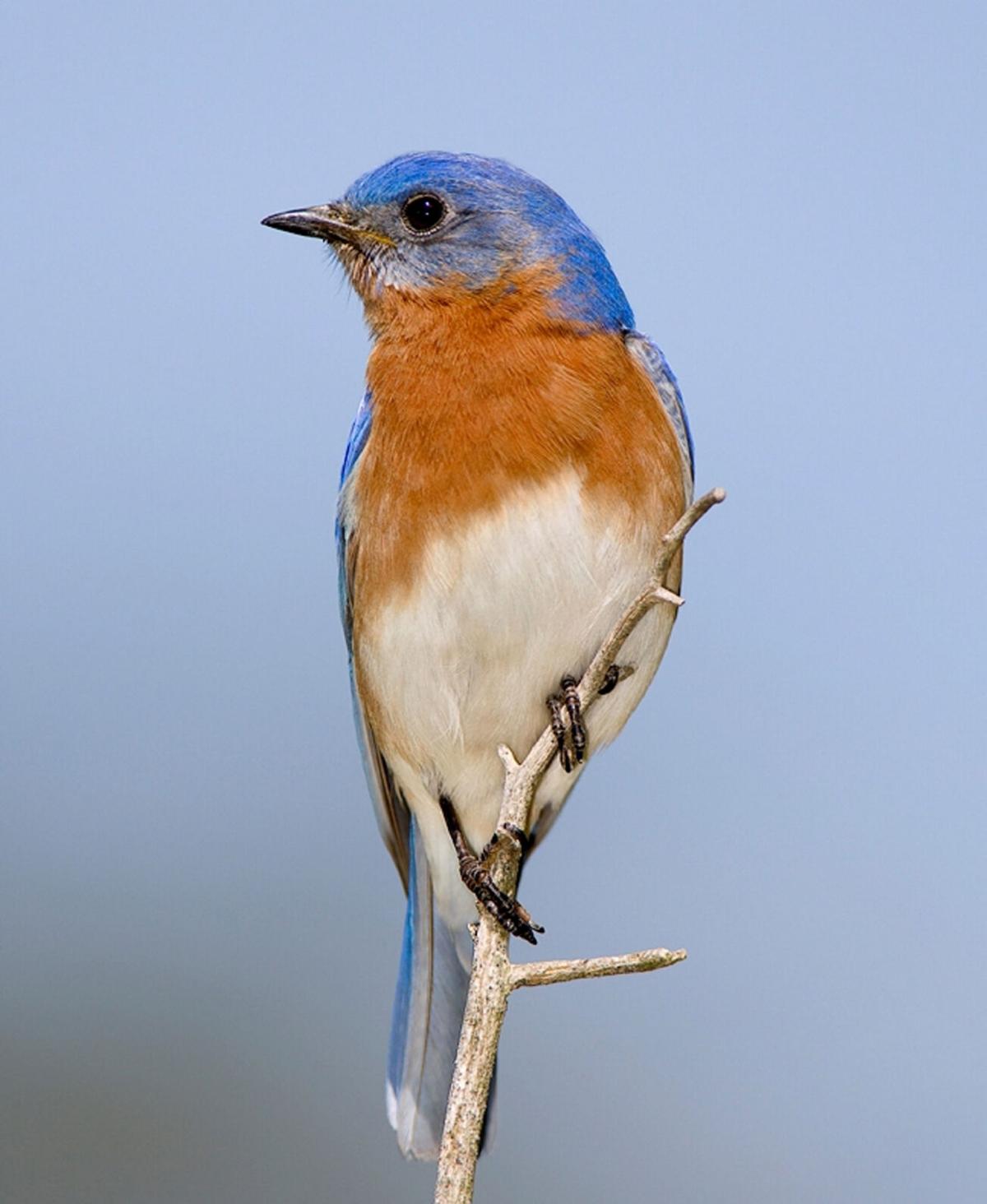 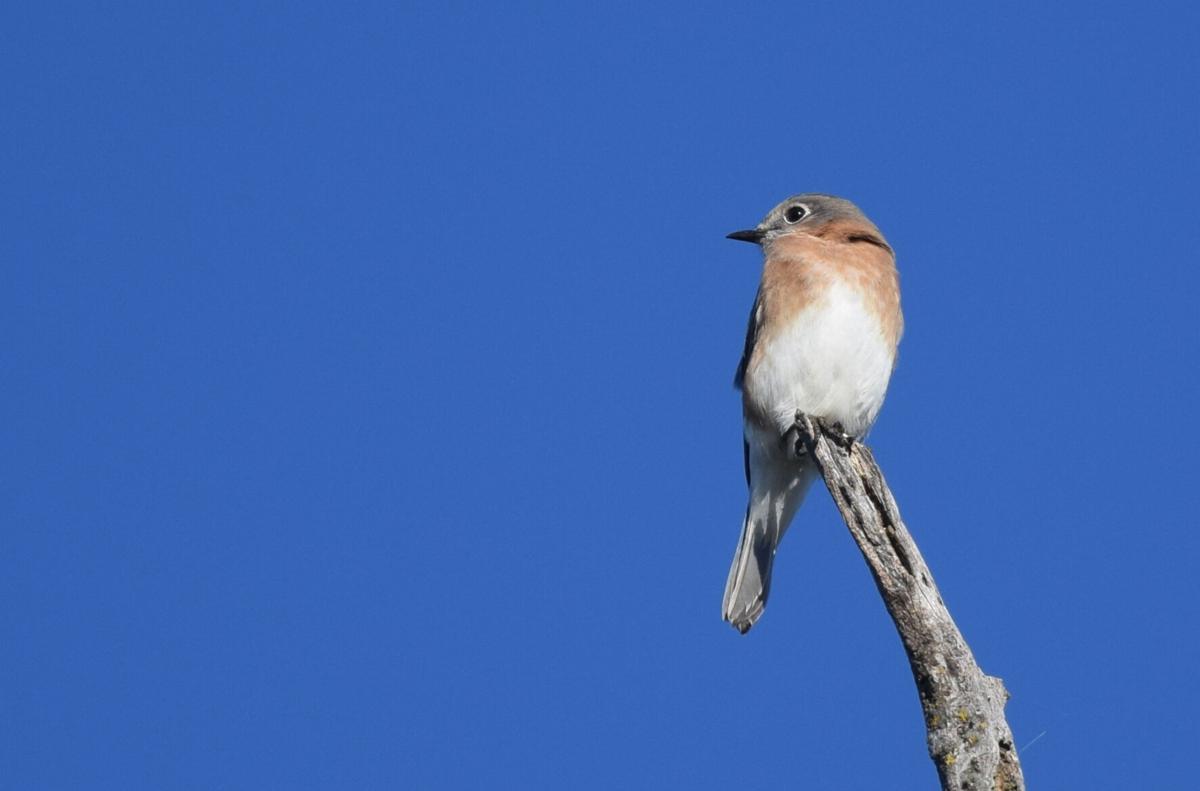 The Bluebirds are here. Hooray! That’s what all of us are saying right now as we watch them decide which nest boxes they will use after a long winter of waiting for spring.

Many of us have had our well-trained eyes out for bluebirds all winter long ... and with very good results. I don’t know how many people had notified me that they have bluebirds “already nesting” in January and February. My response is diplomatically worded so as not to offend them, by saying that the bluebirds were only “dreaming of spring.”

I reminded them that bluebirds don’t start nesting until April (sometimes in late March.)

As we all know, winter bluebirds are often in groups of four to a dozen. During the winter these bluebirds usually all pile into one nest box to keep warm all night long. During the day, when we see several bluebirds checking out a nest box, they are just having fun – kind of like window shopping.

When it comes to nesting time in early spring, remember the expression “two’s company, three’s a crowd.” When you have only a pair hanging out near your nest box in March and April you know that they are pretty serious about nesting. Sometimes they compete with another pair for that prime nest box. (Bluebirds generally do not let another pair nest within about 300 feet of them!)

I don’t know about you, but when I’m putting up nest boxes or making nest box location changes, I try to think like a bluebird.

Just what exactly would be the perfect spot? Is it too close to a tree? Is it pointing away from the prevailing southwest winds? Will there be something else to perch on near the box besides the nest box itself? Is it safe from predators?

We often make our nest boxes to exact recommended measurements, though our boxes (and the recommendations) do vary a bit. Experienced bluebirders often have some slight recommended differences like whether or not to make the entrance hole deeper, or whether or not to put vent holes or slots up above, or drainage/air holes in the bottom of the box, or whether to make the box open from the front or the side. We have to remember that when all bluebirds used to nest in natural cavities 50 to 100 or more years ago that those natural dimensions varied far more than what our nest boxes do. Virtually any decent hollow cavity would suffice.

The bluebirds are less fussy about nest boxes than we are – though sometimes we just can’t figure out why that particular pair of bluebirds decided against that “perfect box and great location” that we had in mind? They probably have a good reason.

In any event, the things we can control in the interest of the bluebirds’ safety are still very helpful. How many people have put boxes way too close to the bushes, vines, and hedgerows only to attract a bluebird pair in April and then a little later have an aggressive early-May-returning house wren evict their eggs? If that happens, we have no one to blame but ourselves. Remember to keep your boxes at least 100 feet from thickets and bushes!

Another thing we can do for the bluebirds is to make sure that their entrance hole is the correct size (1.5 inches) so that bigger birds can’t get in or even stick their heads in to disrupt the nest – thus a good reason to make the entrance longer/deeper with another block of wood extending the entrance hole.

Are we putting up the bluebird nest box right in the middle of a nasty house sparrow population thinking that the bluebirds will persevere without any intervention from us humans?

Even when we intervene, it’s hard enough to help the bluebirds win the nesting battle. Maybe we should consider putting those nest boxes out on a nearby country road where the house sparrows are less of a threat? A nice rural country road with some utility wires near a pasture or hay field with only a couple scattered trees seems more appropriate. We all like the convenience and beauty of seeing the bluebirds in our yard but maybe it’s best for them to be elsewhere.

We could all have a wonderful and constructive discussion about what’s the best “this and that” for the bluebirds and we would all learn a great deal! We need to keep open minds and share our successes and failures. You can learn a lot more by logging onto the New York State Bluebird Society website at http://nysbs.org/.

The bottom line is that if we all try to think more like a bluebird and what’s best for them, we probably will see much better fledging results this season.

Hans Kunze is an avid birder and nature enthusiast who has been writing about birds and nature for more than 30 years. He writes for The Livingston County News twice each month. Write him at 6340 LaGrange Rd Wyoming, NY 14591, call or text (585) 813-2676, or email lesliekunze@aol.com.