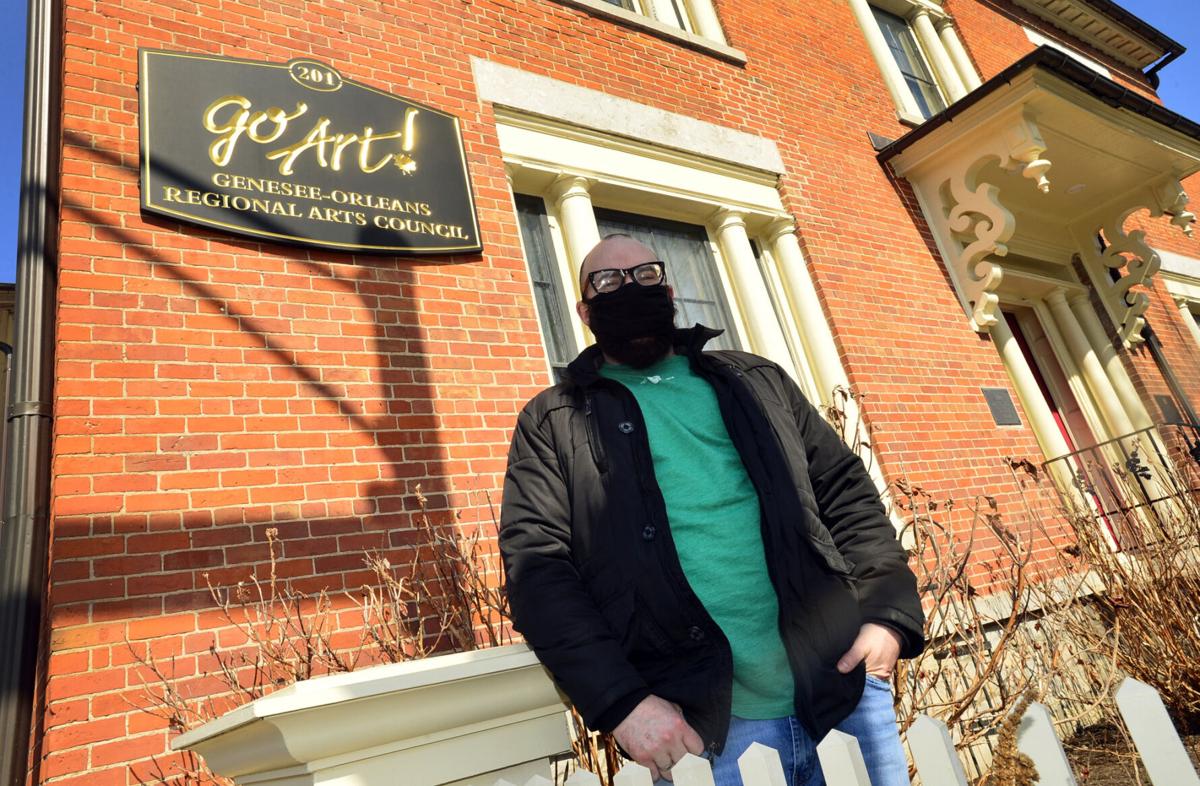 Mark Gutman/Daily NewsGregory Hallock of the Genesee-Orleans Regional Arts Council hopes to have the Batavia gallery opened by Septemeber, but he acknowledged that many questions related to safety during the pandemic remain. 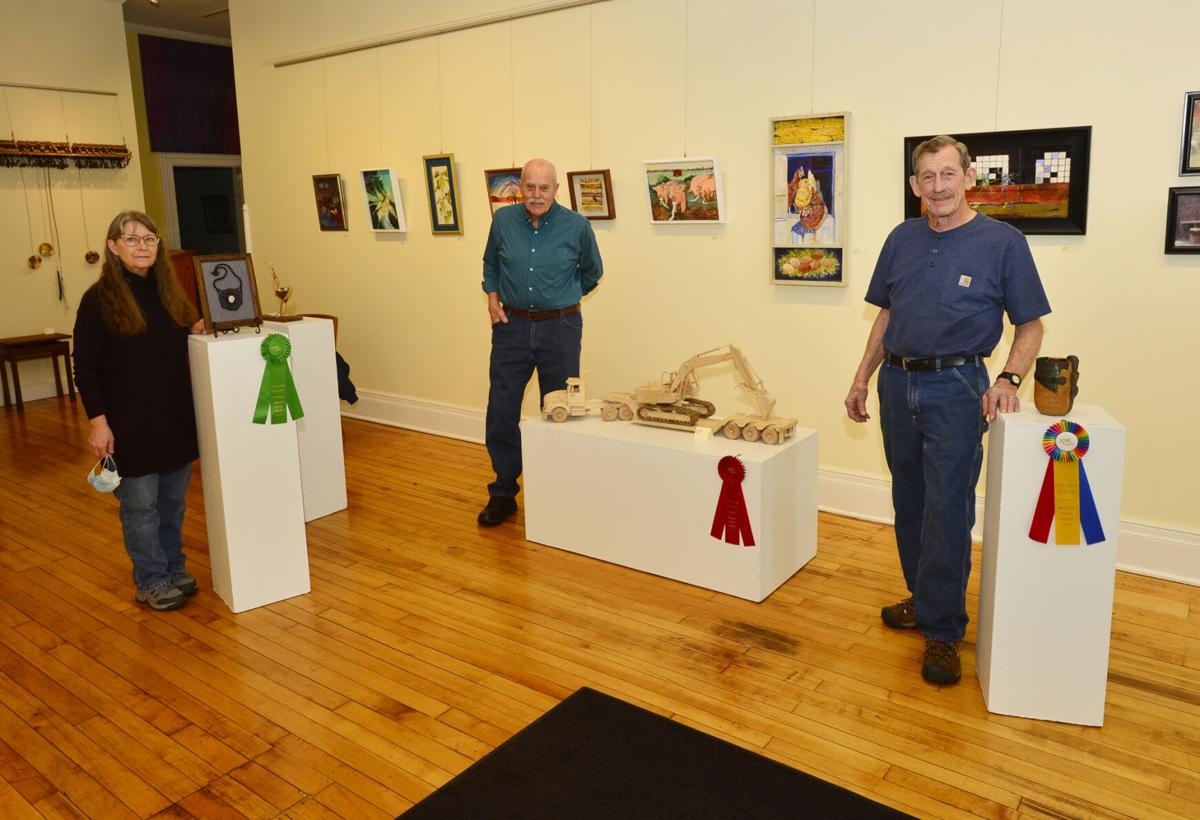 Mark Gutman/Daily News File PhotoShown at the Arts Council for Wyoming County Gallery in Perry are, from left, Susan Swanson, Gerald Sahrle, and Reginal Page. The artists and standing next to their work, which was featured in the annual members show in January. The arts council has hosted both virtual and live - and sometimes both at the same time - events through the pandemic. 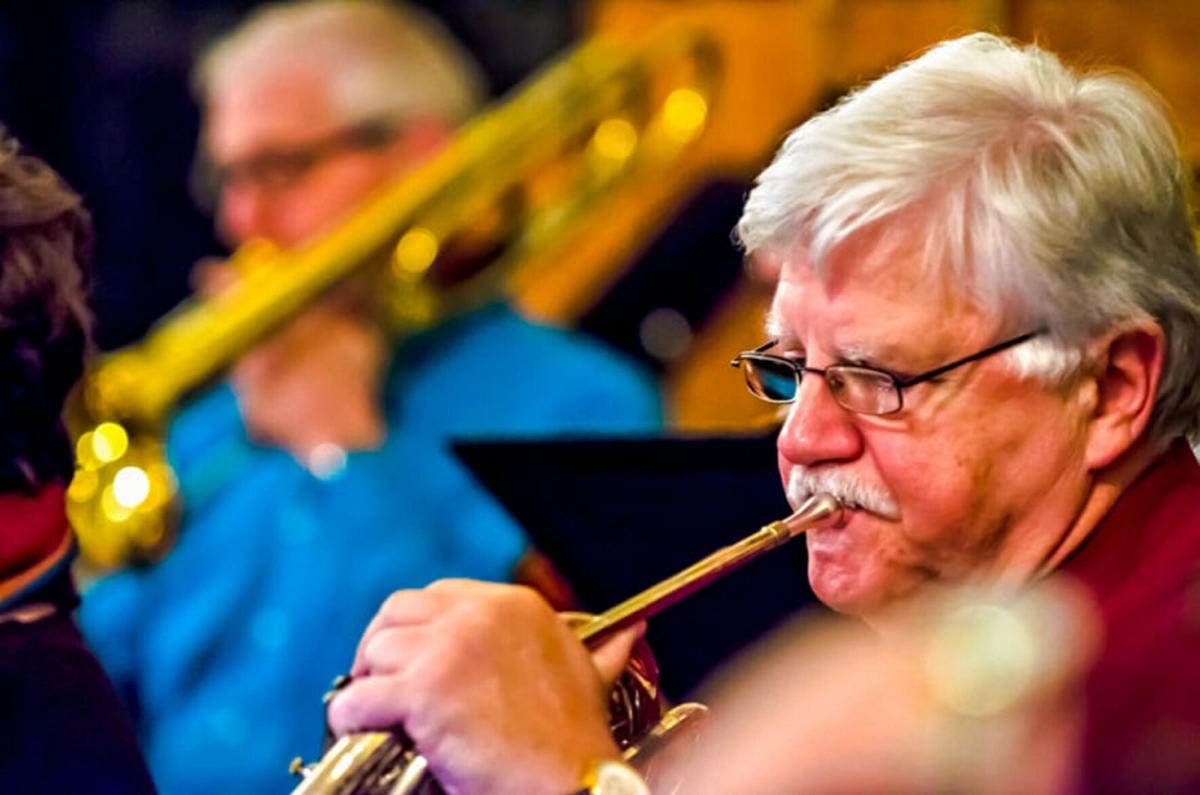 Submitted photoBob Knipe, a longtime member of the Genesee Symphony Orchestra, will be remembered with a livestreamed memorial concert at 7:30 p.m. March 26. 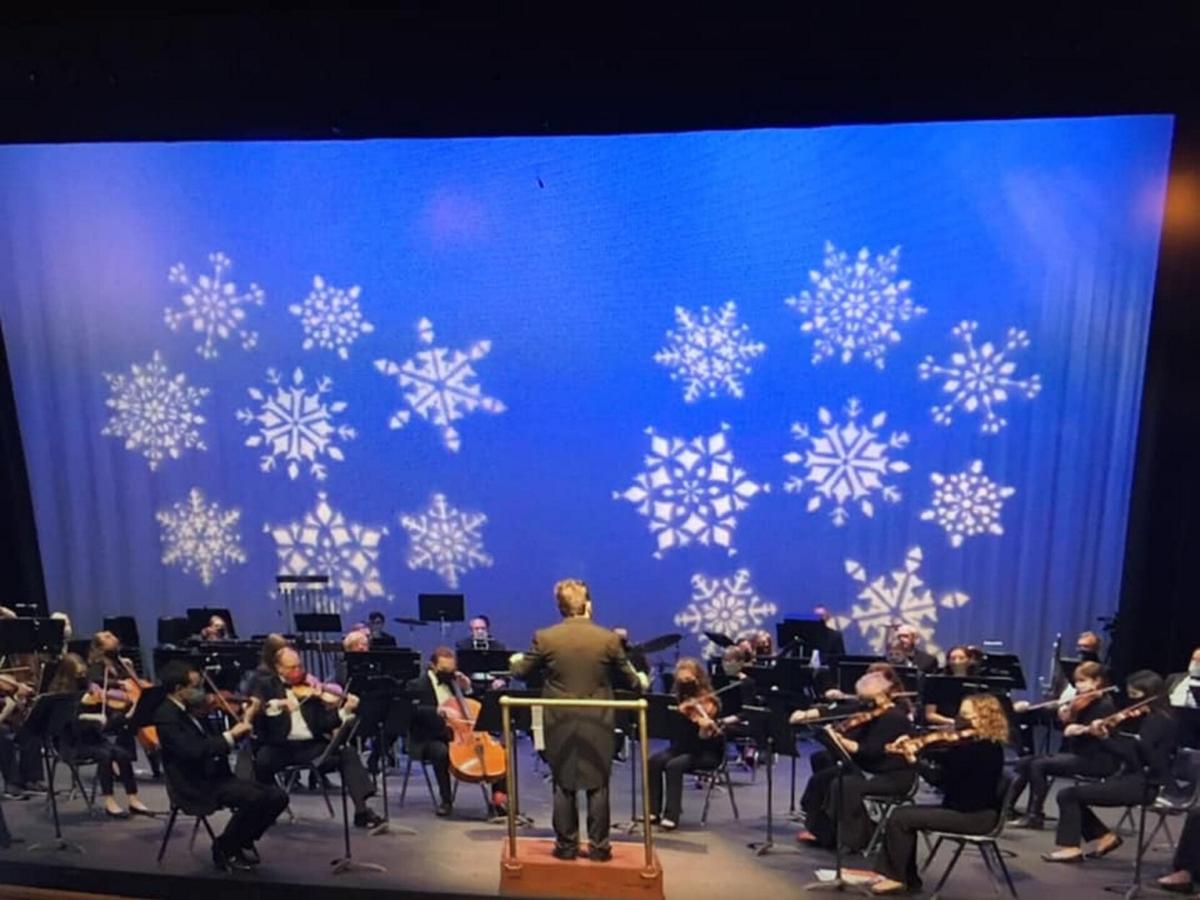 Mark Gutman/Daily NewsGregory Hallock of the Genesee-Orleans Regional Arts Council hopes to have the Batavia gallery opened by Septemeber, but he acknowledged that many questions related to safety during the pandemic remain.

Mark Gutman/Daily News File PhotoShown at the Arts Council for Wyoming County Gallery in Perry are, from left, Susan Swanson, Gerald Sahrle, and Reginal Page. The artists and standing next to their work, which was featured in the annual members show in January. The arts council has hosted both virtual and live - and sometimes both at the same time - events through the pandemic.

Submitted photoBob Knipe, a longtime member of the Genesee Symphony Orchestra, will be remembered with a livestreamed memorial concert at 7:30 p.m. March 26.

As doors shut and all but essential buildings closed in a desperate attempt to keep COVID-19 at bay, the arts across the GLOW region found their own way to persevere.

That was how Gregory A. Hallock, executive director of the Genesee-Orleans Regional Arts Council, described GO ART’s situation in 2020.

“We had a lot of funding that was frozen during the time, and we didn’t end up losing any grants, but there is still a fear of stuff being cut in the future,” he said. “We personally had to cut staff down. We’re down to two part-time employees, but we’ll be starting up full-time in April and start working on plans to get this space open and moving again.”

GO ART! runs the decentralization grant program that uses state money to fund local programs and events. A lot of those events in 2020 were cancelled due to COVID-19, but Hallock said hopefully they will be able to do them this year instead.

As for what events to expect this year, he said he can’t answer that.

While GO ART! is talking about its annual Fourth of July Picnic in the Park, the arts council is unsure if they’ll be able to put it on. As of April 2, New York is expected to allow more people to attend outdoor gathering, but that number will likely still be too limited for an event on the scale of Picnic in the Park. GO ART! also needs to consider if it has the budget for testing, how the event would be limited to only one entrance, and if it would be worth it financially.

As for the galleries in the GO ART! building, the arts council hopes to have them reopened on Sept. 1. But, due to health regulations, Hallock said the arts council may need to limit the time the gallery will be open to the public so the space be cleaned after visitors.

Currently, GO ART! has $70,000 in decentralization grants for this year.

“There will be stuff happening in Genesee and Orleans counties because we are putting money out there for it,” he said.

GO ART! has also received a lot of grant money to do building renovations, and Hallock said they were trying to do it during the shut-down.

“However, we had to pause a lot of it — we were in the middle of projects, but when the funding wasn’t coming in, and they are reimbursement grants, we couldn’t afford to put out any more money without money being reimbursed,” he said. The hope is that with money starting to come in again, GO ART! can get reimbursed and continue with the renovations.

Jackie Swaby, executive director for the Arts Council for Wyoming County, said some of its programs switched to a virtual offering, or a hybrid model of limited in-person events with an online component.

“We are definitely seeing an online increase in engagement from the community,” she said.

Last year was the ACWC’s 45th anniversary and it had special events lined up, receiving two grants to make them happen. The COVID-19 pandemic caused the events to be postponed, but as restrictions loosen up, the arts council expects to move forward with a belated anniversary celebration.

The pandemic also saw a significant change in the ACWC’s all-county high school and elementary art show, which had happened for the past 30 years. With COVID-19, the arts council gave art educators the option to participate or not. Only Perry High School decided to participate this year.

Swaby said the ACWC was able to secure a Paycheck Protection Program, or PPP, loan last year. However, the ACWC did lose at least $80,000 in revenue last year with major fundraisers and other events canceled.

The largest fundraiser for the ACWC is the Letchworth Arts and Crafts Show, and second to that is the arts council’s annual auction. The arts council also does smaller fundraisers such as concerts to supplement their grants.

Swaby said if the arts council isn’t able to present some of its fundraisers this year it is looking at another significant loss in revenue.

“How will we pay that back?” she asked. “So we are really hoping that we can weather the storm and continue to function on our reserves, which are being depleted as we speak.”

The Genesee Valley Council on the Arts closed its galleries in 2020 from mid-March through September.

“Our staff continued to work remotely through that time and fortunately, we didn’t need to make any layoffs,” said Executive Director Deborah Bump.

Exhibits were moved online and the annual Fare and Ware Festival, a major fundraiser, was cancelled. Bump said in September the arts council re-opened and had exhibits but not many visitors. The annual Artful Holidays Arts and Crafts sale was held in December, both in-person and online.

“We are planning to move forward with exhibits and events in 2021, starting with our annual Scholastic Show March 27,” Bump said. “We will continue to wear masks and social distance in our galleries; we are lucky at GVCA because we have a great outdoor space that we can use in the warmer months for events and receptions.”

Bump said the GVCA had strong support from its members in 2020, which helped with their finances. They also received the first round of PPP funding and are waiting to hear about the second round. She said the state Council on the Arts reduced grant funding in the second half of 2020 by 20 percent, but is hopeful the arts council should be able to receive full funding in 2021.

With a vaccination rollout, Bump said hopefully more people will feel more comfortable visiting the galleries. The planned exhibits this year include its annual Member Show, a collaboration with the Livingston County Historian’s Office celebrating the county’s bicentennial, and an exhibit featuring the work of female veterans.

S. Shade Zajac, conductor and music director of the Genesee Symphony Orchestra, said the pandemic has been difficult for everyone. Over the past year, Zajac said there were many times they probably would have had people willing to play, but they had no place to play. The orchestra relies on many places around the county to rehearse; however, last year places weren’t allowing outside groups in.

The Genesee Symphony Orchestra canceled its last concert of the 2020 season, and was unable to do its “Summer Serenade” because it wasn’t safe.

Zajac said it was looking gloomy for the orchestra until Patty Hume, executive secretary for Genesee Community College, contacted him to ask the orchestra to play for Encore, which was held virtually in 2020.

“Of course I said ‘absolutely’ having no idea how it would actually turn up. Would we get musicians willing enough to come and play?” he said. “Of course, that determines what pieces I pick for us to play. ... I was actually in the position where I had to turn musicians away because we couldn’t fit on the stage.”

Zajac said the fact the orchestra and its musicians weren’t sure when they would be able perform together again wasn’t lost on anybody.

“It was emotional. There was a heaviness about it, and you know I always tell people to play like you may never again,” he said. “I really didn’t have to say that this time because we didn’t know when we would be able to play again.”

Zajac said the board of the orchestra has been fantastic. They’ve been meeting regularly and they’ve come up with protocols and discussed back-up plans long before they had any event on the horizon. He said a lot of orchestras a lot bigger than them with far bigger budgets and far more fame aren’t doing anything because they can’t or won’t, so it’s spectacular that the Genesee Symphony Orchestra is able to do something.

Financially, the orchestra has taken a hit, Zajac said it’s not in danger of going away.

In addition to the normal hardships, the orchestra also faced personal ones; Dave Funston, a longtime member of the Genesee Symphony Orchestra who had retired in 2017, passed away due to COVID-19. Recently, Bob Knipe, another longtime member of the orchestra, died due to cancer. The orchestra had been planning to do a concert for Knipe while he was alive, and GCC allowed them to play at the college. Knipe passed away before the concert was able to be put on. The orchestra will livestream a free memorial concert for Knipe at 7:30 p.m. March 26. The GSO is also collecting money for a scholarship in Knipe’s honor.

Zajac said looking forward next season the GSO does have plans. It will be the orchestra’s 75th season.

“It’s one of the oldest civic orchestra’s around, and we have been planning this for quite some time,” he said. “I can’t really tell you about the plans because we haven’t announced them yet, ... but there are tons of incredible things, tons of things the orchestra has never done before, things the orchestra hasn’t done for a very long time.”

Zajac did say the theme will be, “Yesterday, Today and Tomorrow.”