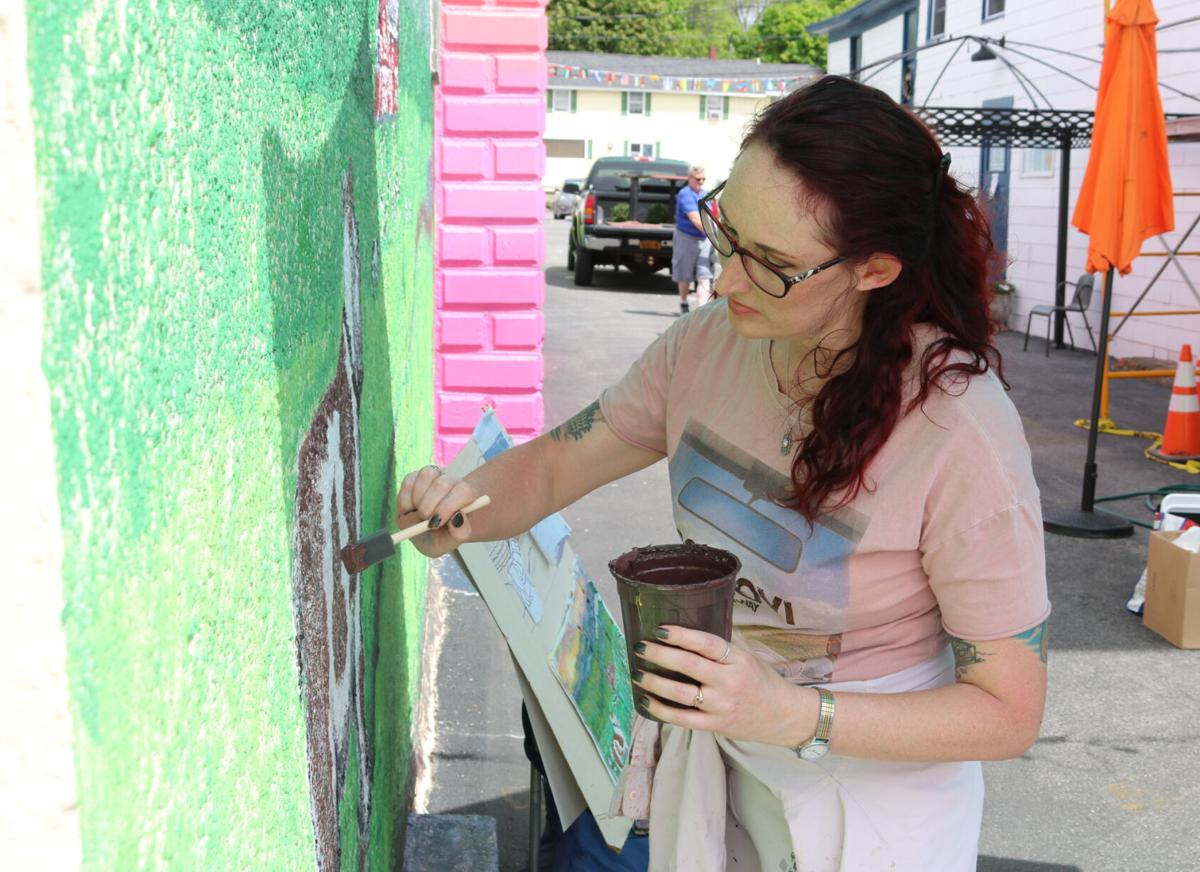 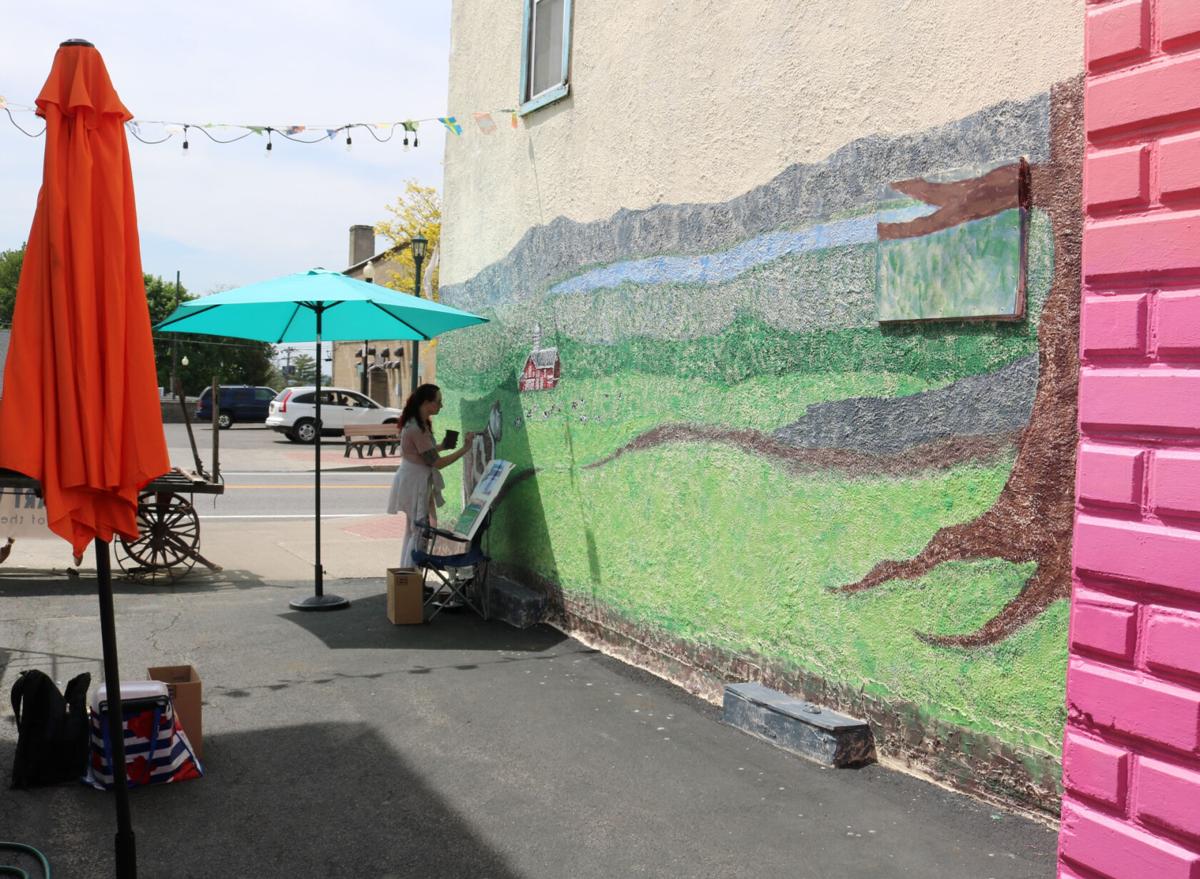 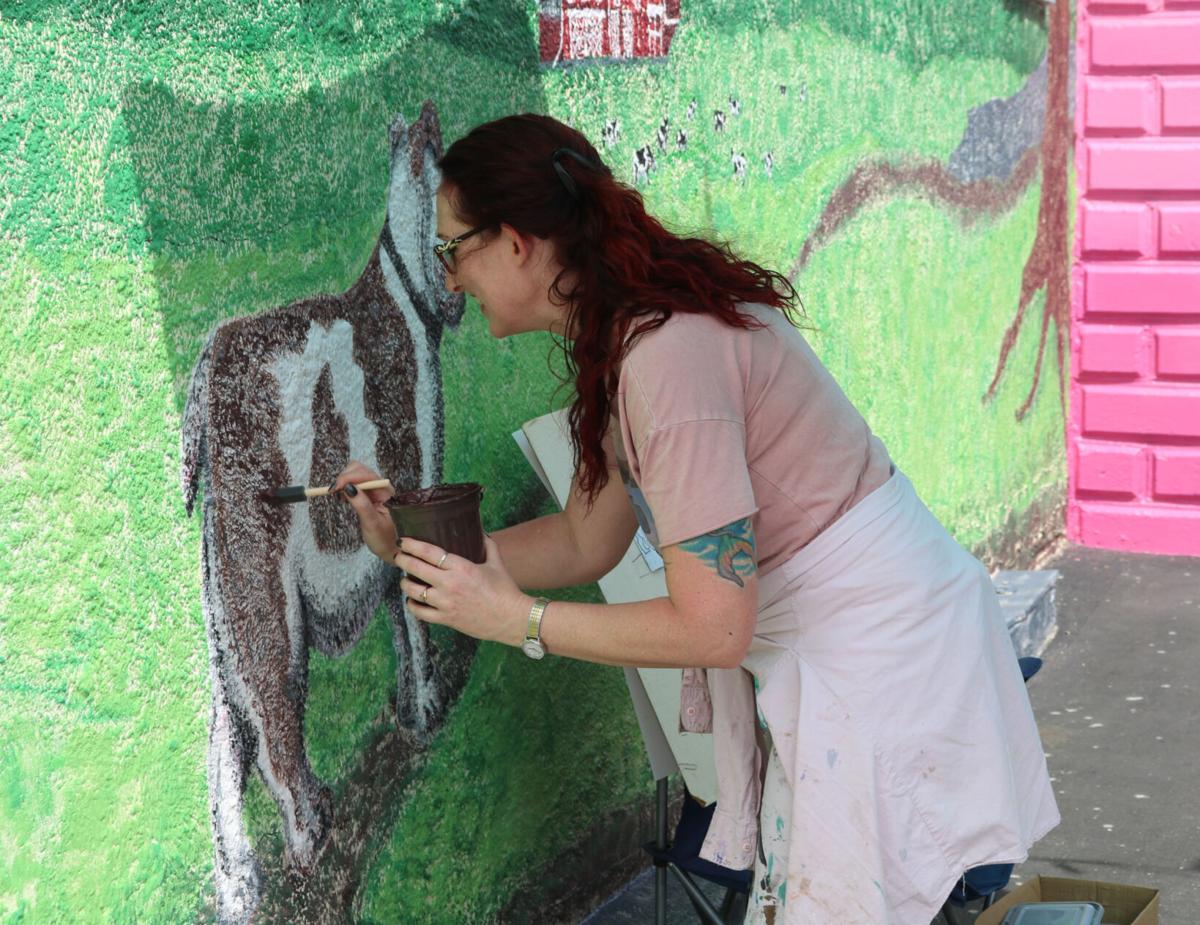 Brendan McDonough/Livingston County News Livonia resident, hairdresser and also artist Kate Chesbro works on painting a large scale mural in Livonia. She hopes when complete people will not only enjoy it but be inspired to create art of their own.

Brendan McDonough/Livingston County News Livonia resident, hairdresser and also artist Kate Chesbro works on painting a large scale mural in Livonia. She hopes when complete people will not only enjoy it but be inspired to create art of their own.

LIVONIA – Instead of painting on a canvas Livonia artist Kate Chesbro is spending her time outdoors as she paints a large scale mural outside in an alley adjacent to the Twisters Ice Cream Shop, 13 Commercial St.

“I am painting a landscape that is based on Conesus Lake. There is a spot on Stagecoach Road where you can look over and see the lake and valley and all of that. I decided add a bulldog because we are the Livonia Bulldogs and a barn and some cows and just to get this picture to feel like Livonia, Conesus and our town,” said Chesbro.

“The grand vision is that people will travel to the areas,” said Downtown Coordinator Louise Wadsworth.

In addition to traveling to look at the murals a major event is also being planned for next summer to help celebrate them.

“Next year we are working towards doing a mural festival so that we will do one mural in every downtown in July,” said Wadsworth.

For Chesbro painting a mural on this space was something that she says she had not originally planned to do.

“I came down here in February and I looked at the wall and they were not originally planning on painting this wall and I thought, well when you drive down this street that is all that you can see from this end.

So I thought that there should be a mural on this wall and I asked them if I could do it and they said, ‘go for it,’ ” said Chesbro.

Since then she has been painting, having fun and putting her creativity to the test.

“The other things that I am going to do is just put a lot of fun, whimsical animals like birds and squirrels and butterflies. I am hoping that when kids come down here to have their ice cream that they will want to stand here and look at this wall and just find fun things about it,” said Chesbro.

For Chesbro, painting the mural has been a labor of love.

“I just kind of want to make our town look fun, welcoming, exciting and especially for kids,” said Chesbro.

Many kids, she said, have stopped by to not only say hello but give her suggestions.

“This really is for me a lot of fun and it also fun when people walk up to me and they give me suggestions.

“My ideas for animals keep getting bigger and bigger, like yesterday someone came up to me and said he would like to see a woodpecker on the trees and someone else said they want to see an owl,” said Chesbro.

It is also a project that she says has come with its share of challenges, particularly working outside in the elements.

“It has gone from cold and rainy to really hot, so that has been a bit of a challenge,” said Chesbro.

As people share with her ideas, Chesbro said she writes them down and takes notes on what residents might want to see in the mural as she creates art and aims to inspire the next generation in Livonia.

“A couple girls came up here and one of them said, ‘I can not even draw a straight line,’ ” Chesbro said. “I was like keep practicing, and if you want to do this keep at it.