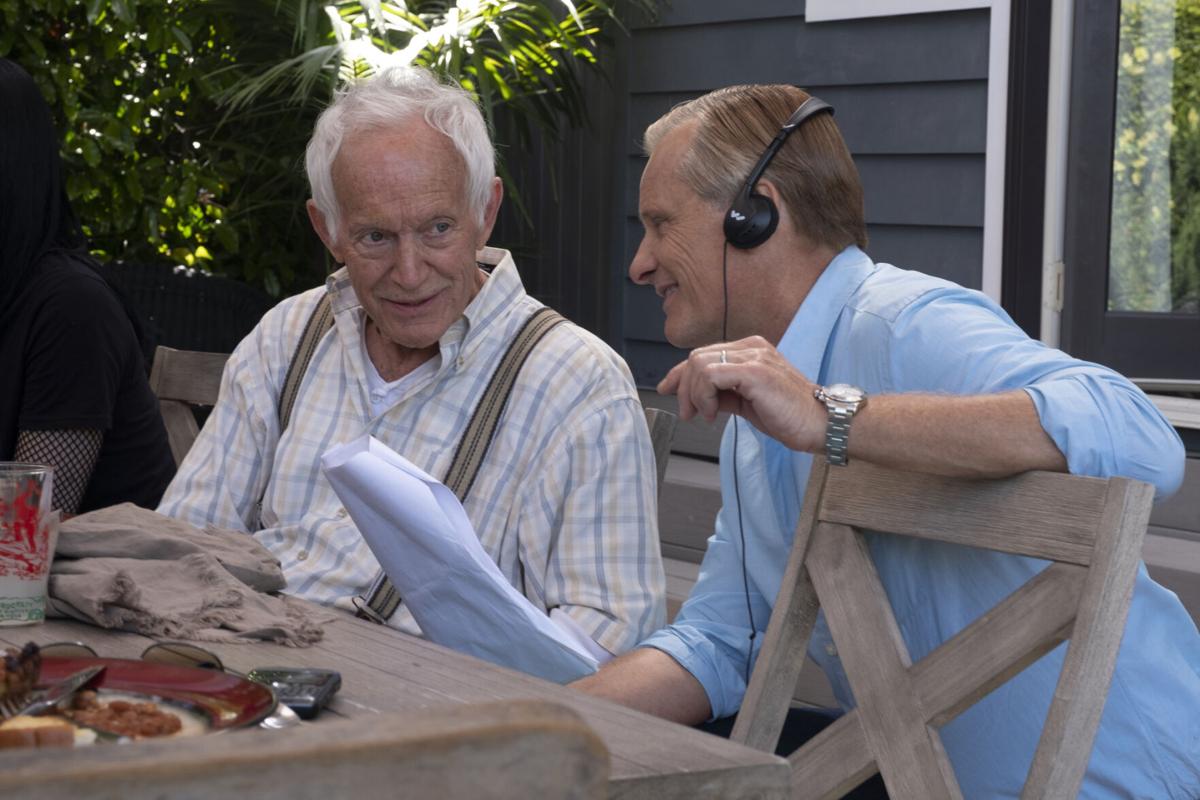 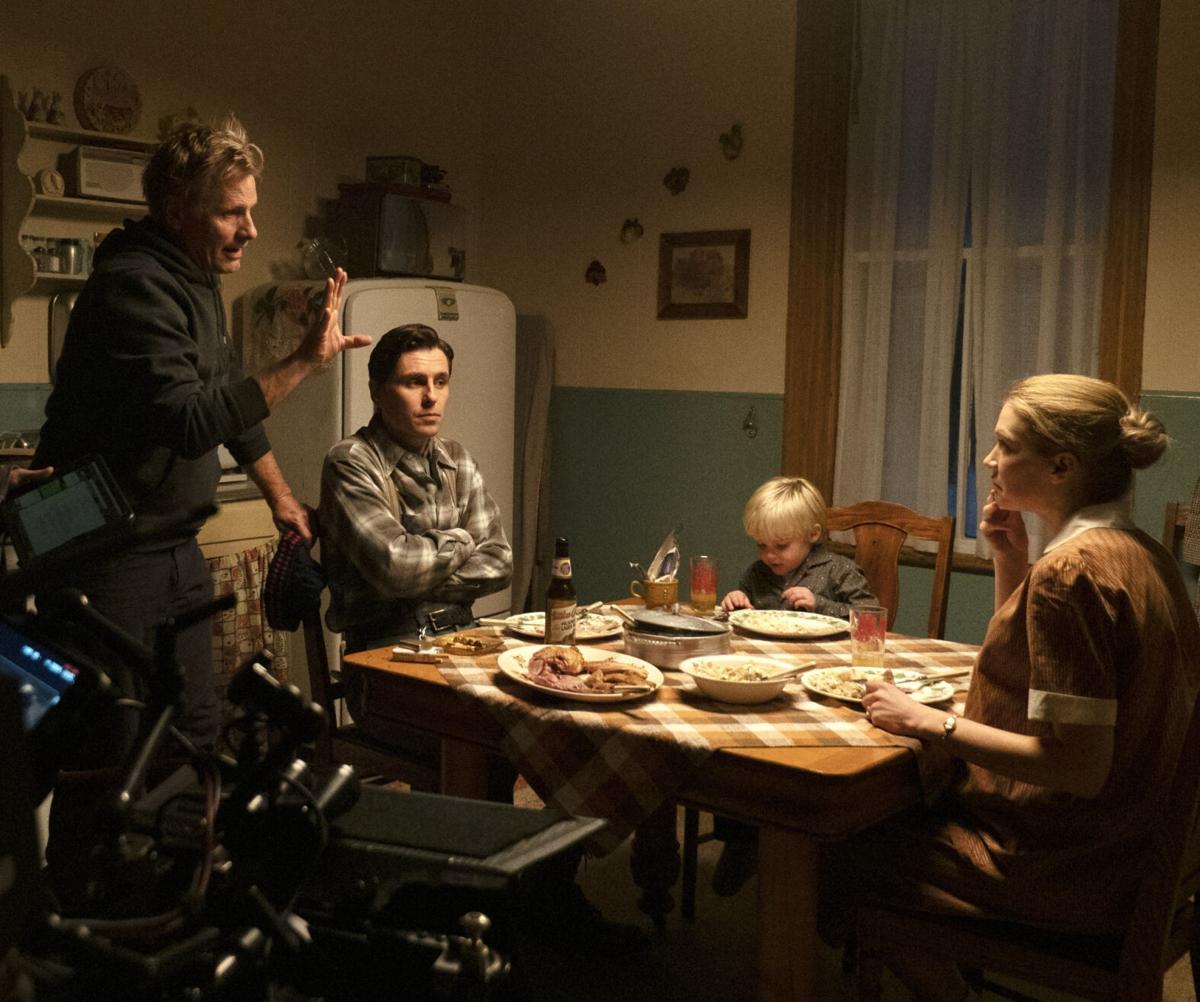 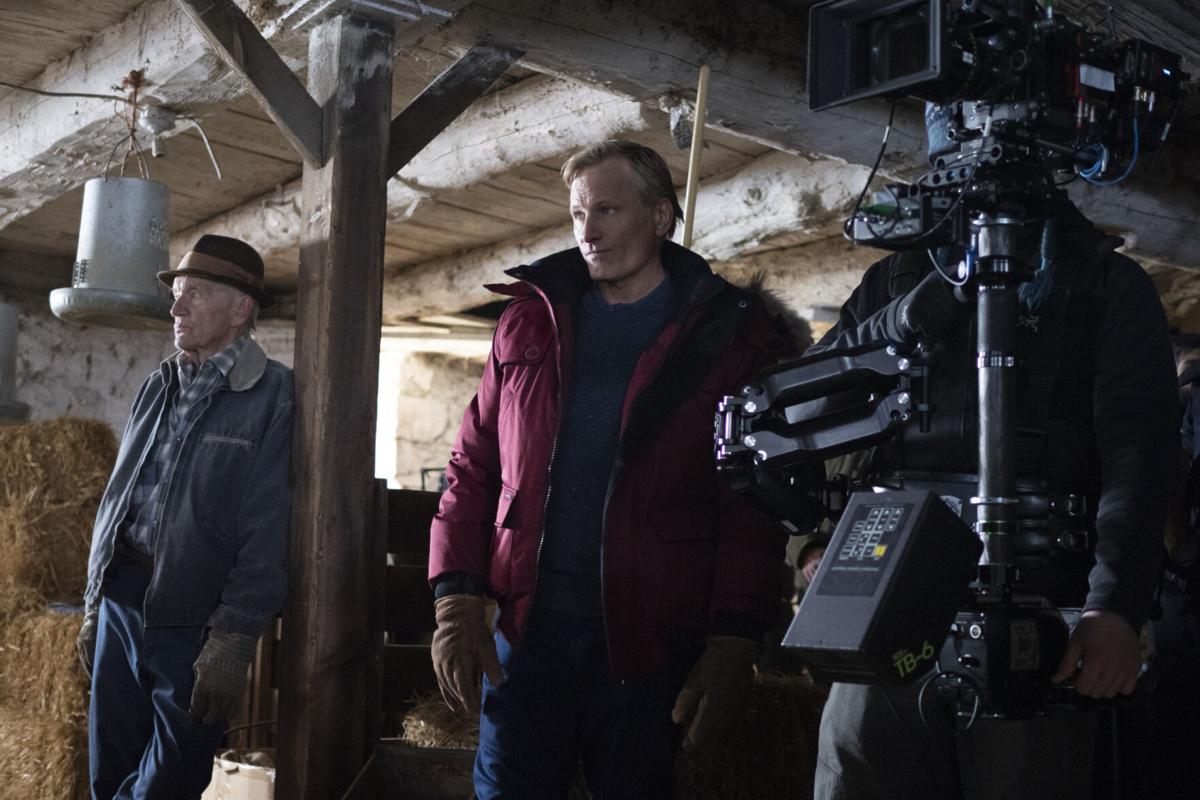 Viggo Mortensen directs a scene from “Falling.” At left is Lance Henriksen, who plays Willis. Photo by Brendan Adam-Zwelling 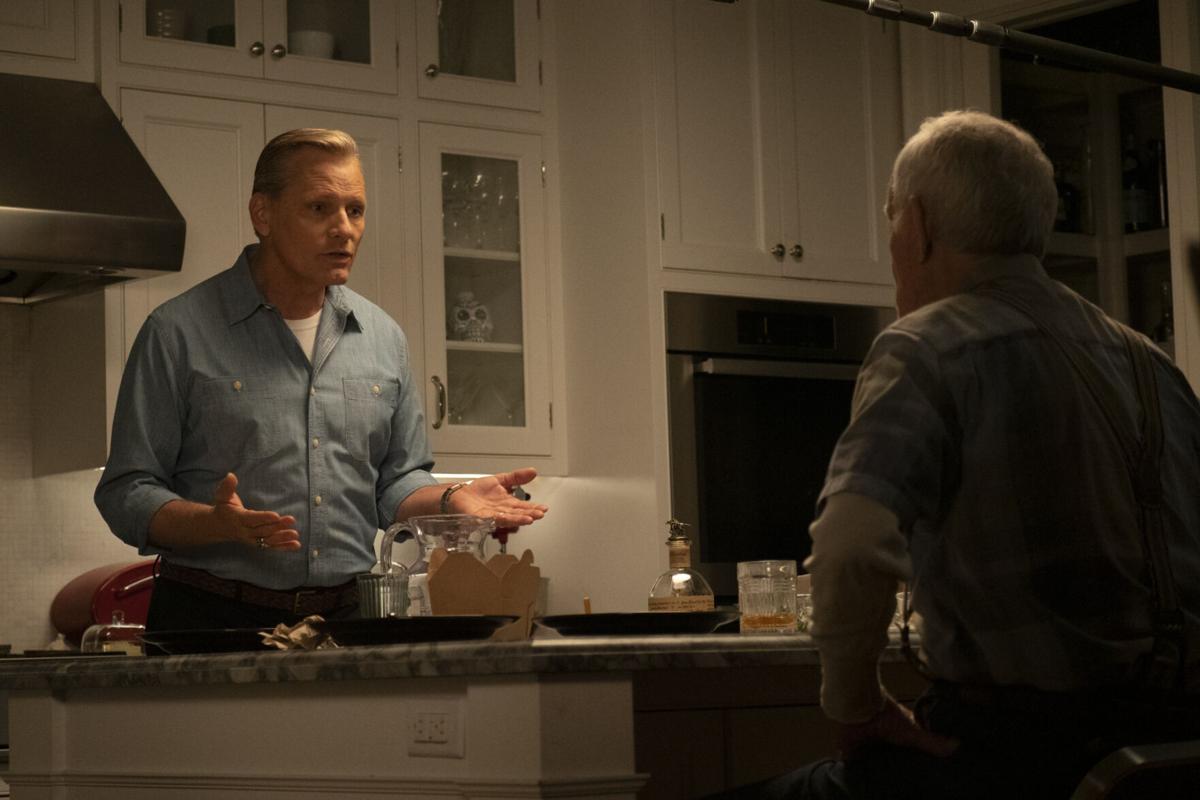 Viggo Mortensen, left, plays John, and Lance Henriksen, right, plays his father in “Falling.” The film is being released on streaming sites. Photo by Brendan Adam-Zwelling 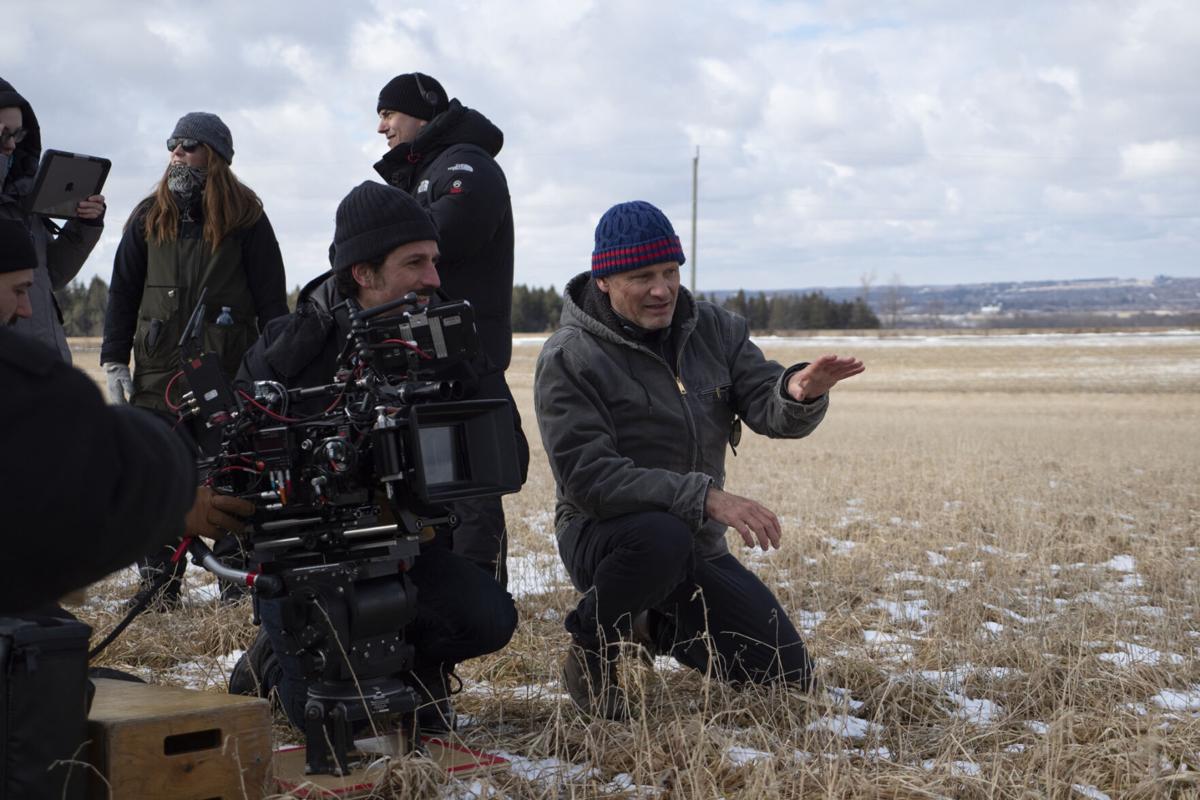 Viggo Mortensen, right, directs a scene in “Falling.” Much of it was shot in southern Ontario. Photo by Brendan Adam-Zwelling 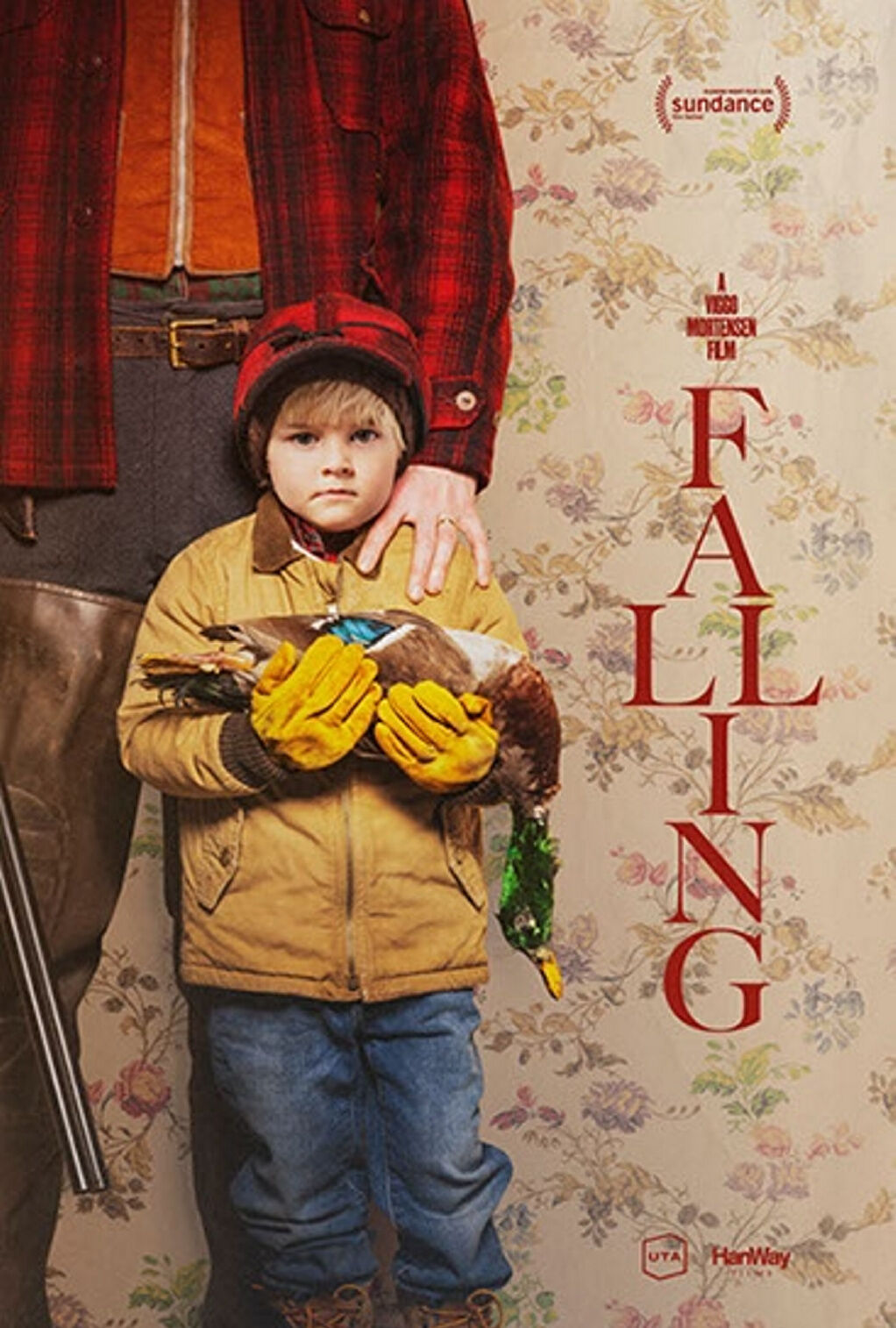 Viggo Mortensen directs a scene from “Falling.” At left is Lance Henriksen, who plays Willis. Photo by Brendan Adam-Zwelling

Viggo Mortensen, left, plays John, and Lance Henriksen, right, plays his father in “Falling.” The film is being released on streaming sites. Photo by Brendan Adam-Zwelling

Viggo Mortensen, right, directs a scene in “Falling.” Much of it was shot in southern Ontario. Photo by Brendan Adam-Zwelling

The movie, released Feb. 5 in the U.S. on all streaming platforms and in U.S. theaters, is essentially about a headstrong man from a bygone era in the early stages of dementia. When his son tries to help, serious conflict arises as the two fail to communicate or find common ground.

And communication, Mortensen said, is something this nation needs more than ever.

“We’ve got to find a way to look past our political leanings and everything else, and deal with facts and try, as much as possible, try to listen to people,” Mortensen said in a phone interview from Madrid, Spain. “We used to be better at it, I think, as a country where we could actually find some middle ground. When we agree to disagree, we could actually talk. Now, there’s a lot of just not talking at all. Everybody has their own corner and that’s it.”

In “Falling,” Mortensen, a 1976 graduate of Watertown High School and 1980 graduate of St. Lawrence University, Canton, makes his debut as a writer/director.

“Falling” made its debut last winter at the Sundance Film Festival and was released in Europe last year. After its debut, John DeFore of The Hollywood Reporter called it, “a masterful family drama taking a compassionate view of a father whose faults are impossible to ignore.”

Mortensen said that idea for “Falling” came to him as he was flying across the Atlantic Ocean after his mother’s funeral.

His mom, Grace “Gay” Atkinson Wright, died April 25, 2015, at the age of 86 in Watertown. She was born in Watertown and earned a degree from the Emma Willard School in Troy, and a liberal arts degree from Pine Manor College, Chestnut Hill, Mass., in 1948.

Mortensen’s father, V. Peter Mortensen, Cape Vincent, died in 2017 at the age of 87. The elder Mortensen was born in 1929 in Snekkerup, Vigersted parish, Denmark.

“When my mom died, she had dementia and Parkinson’s for several years and my dad was just beginning to suffer from dementia when he died,” Mortensen said. “That was present in my mind and I started writing the story of ‘Falling,’ using feelings from my mom and dad, and a few little things that are true.”

Mortensen dedicated the film to his brothers, Charles and Walter. Charles lives in northern Idaho, and Walter lives in the Clayton area. Viggo is a regular visitor to the north country.

“I used some fragments from real life that they would be familiar with,” Mortensen said.

One true aspect for himself in “Falling,” Mortensen said, is the episode of the duck, in which Grady McKenzie plays the younger version of the character John, played by Mortensen.

“That’s taken from real-life events,” Mortensen said. “It didn’t happen in Northern New York. It happened where I was living as a kid, most of the first 10 years of my life, in South America, where my dad got a job.”

In the film, John, as a young boy, is allowed to shoot his father’s shotgun at a flock of ducks.

“It was winter, and he took me duck hunting when I was 4,” Mortensen said of his real-life dad. “He did offer me to shoot, never dreaming I would hit anything. I got off a lucky shot and got the duck and I did go into the water like I was a retriever dog before my dad could stop me. It was freezing cold.”

When the young Viggo returned home, he wouldn’t part with the duck.

“I took a bath with it, wanted to dry it off, wanted to sleep with it,” Mortensen said. “Mom thought that was ridiculous. She did take it away from me during the night, obviously. When I woke up the next morning, I was actually a lot angrier than that little kid (in the film) to be honest. But I did finally participate in plucking it for dinner.”

The duck incident, Mortensen said, was a good way to introduce the family’s relationship to the natural environment and the dynamics of the family itself. It’s also something his brothers would understand.

“Even though it’s a fictional story, there are enough moments, like the duck stuff, some phrases and certainly the dementia aspect of it in Lance Henriksen’s character, the father. Those things, we share. There’s been a lot of dementia in our family: my parents, my step-dad, some of our grandparents, aunts and uncles on both sides of the family. Even though it’s a fictional story, it does use some real feelings and real events, so I dedicated it to them.”

Willis, the elderly character played by Lance Henriksen, lives in an area described in “Falling” as Northern New York. The film was shot in southern Ontario to reflect this area’s landscape.

“It looks identical in terms of landscapes — farms to trees,” Mortensen said.

The fact that it was shot north of the border, and not here, was largely a matter of financing.

“When we finally found the money to shoot this movie with a combination of European and Canadian financing, the requirement was that I shoot it there rather than across the border in New York state,” Mortensen said. “It looks so much alike and I know the area well, so it was easy to make it look like the area, say between, Lowville and Watertown or the Tug Hill Plateau/Northern New York area.”

Boonville and Lowville were given credits in the film. The character Willis makes some nasty comments about Boonville, which are actually some of the milder vulgarities that he utters.

“My apologies to Boonville!” Mortensen said. “That’s him. That’s not the director or writer. Boonville is beautiful, it’s a beautiful area and I know it well. That whole region is one of the most beautiful places on the planet. It was just to provoke. It’s just one of those ridiculous things that he says. It’s not the most offensive, but I guess if you’re from Boonville, you don’t want to hear that.”

Lowville gets a credit due to a scene where a postcard with a picture of a bear on it is mailed by the two children who play the offspring of Willis and his wife, played by Hannah Gross. In the film, the couple separate, and the kids send the postcard, with a Lowville address on it, from a hotel parking lot in Pennsylvania as they travel with their dad and his girlfriend.

“My intention was that the setting of the family farm is in that area,” Mortensen said. “It’s a little detail that you don’t see unless you’re fast or freeze-frame it.”

Mortensen also added a small detail in the film as an homage to his love of hockey and a particular player. In a diner scene, a framed photograph of Guy LaFleur, the Montreal Canadiens great who won five Stanley Cups with the team in the 1970s, is seen in the background.

Mortensen moved to the Watertown area in the 1970s when he was 11.

“The ’70s were the glory years for the Montreal Canadiens,” Mortensen said. “I didn’t know anything about hockey when we moved up there. I was a soccer fan in Argentina. But I lost touch. In the 1970s, there wasn’t internet, iPhones or any of that. I kind of lost touch with everything from there — the language, the sports.”

But through fuzzy antenna TV, there was NHL hockey carried by Canadian stations.

“I started seeing on TV, this team, this sport, Montreal, playing hockey,” Mortensen said. “And I was like, ‘Wow!’ It’s like soccer but a lot faster, with sticks, and you can fight! And the fans are nuts.”

He even learned some French by listening to radio broadcasts of the games.

“I already spoke Spanish and started to pick up French little by little, because I wanted to know what they were saying about these players.”

“Falling,” with characters biting their tongues and ignoring the nasty, offhand comments by Willis, seems like a simmering volcano. It finally explodes in a key scene between John, played by Mortensen, and Willis, played by Henriksen. They rage at each other with tears and spittle flying. Those tears, Mortensen said, were real.

“That was a difficult scene,” he said. “And we knew that scene had to be uncomfortable for us if it was going to be uncomfortable for the audience. For some people, it can be too much maybe, but it has a lot to do with trying to explore the limits of communication. It’s just asking questions, like are there people who we can’t communicate with at all in our families, in our lives, in work, in society? Are there people who don’t even deserve to be communicated with because there’s nothing in common?”

Mortensen does see some good coming out of the current pandemic, in which the art of communication has taken on new directions. He believes younger people are paying closer attention to their elders.

“Say you are walking down the street and you see some guy in a wheelchair, a woman walking with a walker, whatever — just old people,” Mortensen said. “As you are boppin’ down the street as a teenager in your early 20s, you might not even notice them. They’re kind of invisible because you’re into other things, from music to a girl or a boy you want to meet, motorcycles, school things, or whatever. Now, with the pandemic, I think even young people notice old people, even if it’s just passing briefly.”

Those young people, Mortensen said, may ask themselves:

“I wonder if they’re alone?”

“I wonder if they’re worried about getting sick with COVID and all that stuff?”

The film, in a “non-political way,” could also open up questions about the health care system in the U.S., Mortensen said.

“This is a necessity, a service that we all should have,” he said. “It does need to be improved if we want to be a truly civilized, democratic, ‘For the people’ kind of government. There’s nothing more important than your health. If you don’t have your health, you’ve got nothing.”